Since I’ve had many questions about flying in France, I would now like to introduce my plans for my trip. I hope the “old stagers” in this forum will be able to help me upon my trip. FYI, I’ve never left my homebase overnight, so it is something completely new to me, but I’m not really afraid of it. I asked many of my club’s members which spare parts to take with me, so that should be okay. Now I’m planning the route to my destinations.

I’ve been to Annemasse two years ago, so I know the VFR-route between the Alps and the French Jura, so if the WX is fine, this will be a preferred route. Otherwise, since I am visting the south of France by car nearly every year (and I am also familiar with a good school-level of French), I would like to fly alongside the Motorways I use for our yearly trips because I’d love to see the landscapes from up above.

I created two files, one for the leg between EDSO (Gruibingen-Nortel, my homebase) and LFHS (Bourg-Ceyzériat, which I already visited in autum 2018) and the other between LFHS and LFMU (Béziers-Vias). I already know the guys at LFMU, so I have the permission to land and overnight there. From there, I’d like to make some shorter trips to the south of France or even Spain, but with returning to LFMU afterwards.

For now, I’d love to hear your opinion on the planned routes (available for SkyDemon and google Earth) and for the changes you would do to it and why.

Here are the links:

I’m happy to hear your ideas about it. Please note, that the crossing of the CTRs in the south of France is intended and I will ask for permission to follow the VRPs as soon as I reach Pierrelatte.

Thanks for your help and advice!


I asked many of my club’s members which spare parts to take with me, so that should be okay.

Out of curiosity, what spare parts do you feel are necessary for a flight away from base? I never carry anything but some oil if I plan to be away more than, say, six flight hours.

Unfortunately I don’t think many people are going to plot those URLs, as posted. I don’t use SD and .gpx doesn’t open GE but opens Notepad instead

I would suggest posting images of the routes; small ones would do.

Re spare parts, I think those come in for longer trips. I carry a complete toolbox for a 50hr service, and various spares e.g. a vac pump. One previous thread is here. If you are renting the plane then this is even less of an issue because if it “breaks” it is the school’s problem to recover it (this is a fairly regular issue at schools, which is why many of them don’t like renters flying their “wreckage” abroad).

In France you normally do get CAS transits but you have to take care of any D R and P areas yourself (even if ATC have cleared you on the route on which they exist).

Hi to the both of you,

I’m only taking a tube for our tires with me and the so-called “bungee”, the suspension rubber band for our nose gear. These two are known to fail probably, so it’s better to have these spare parts on board. I’m happy that our mechanic does the 100-hour-check on the plane before we go on our trip.

Peter, as you proposed, I have made screenshots of my intended route. Please excuse me for posting the .gpx-files, I thought they were commonly readable by most of the navigation software. So here is my first leg from EDSO to LFHS: 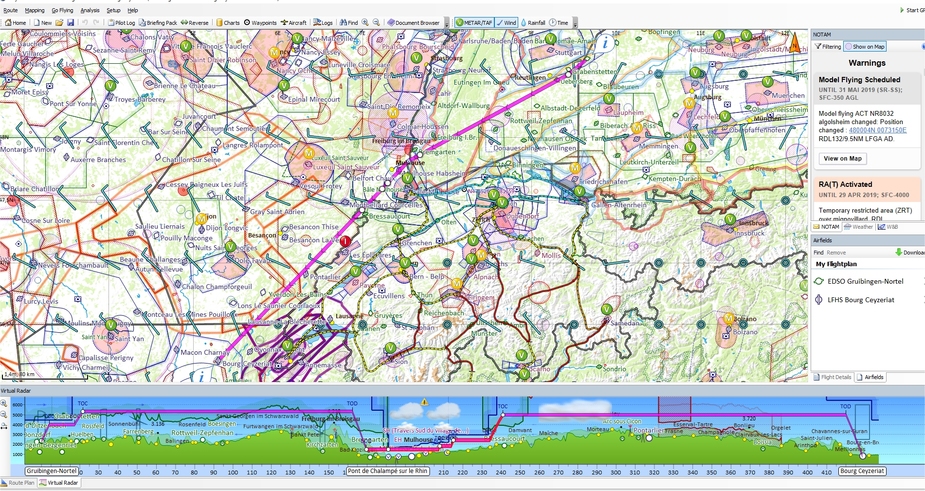 This one should fit quiet nicely, because I flew it already last year.
The second one is a little more difficult, so I’d like to hear your opinion about it:

Do you think this will do, even in rather marginal WX? Normally, I’m a good-weather-pilot, but I don’t care about an OVC cloud layer, as long as it’s high enough…

Thank you for your help :-)

EDIT: I see that the resolution loses pretty much by uploading… so here are the original files:

Normally you can go strait forward in France. Just ask for crossing the different TMAs, they will offer you the crossing. Only once I have had a problem at Lyon TMA. They mixed up with incoming IR traffic and asked for an immediate decent with more then 2000 ft per minute. My answer: negative. A little later a new controller on the radio and everything was solved by a small heading change.

Caution: You have to take care and avoid the nuclear sites in the Rhone valley.
Have fun on your trip.

Your route sounds sensible. Don’t hesitate to call early to get TMA crossings, their screen go far beyond their zone boundaries. If you already talk to the FIS of this TMA, stay on your frequency but make clear you are cleared to enter CAS (it may save you from some trouble).

Enjoy !! Write a report once you are back, it is very valuable.

thanks for your answers and your tips with crossing the TMAs. I planned the route without crossing the Lyon TMA, nevertheless I will ask for it – it’s only for the case I don’t get a clearance. Regarding the nuclear power plant ED-P’s I’m completely aware of them…

Thanks to you all! I will come back to this thread as soon as the weather is forecastable.

No, I would not fly the route like that. The Idea is ok, but

If the files don’t work, here is a screenshot: 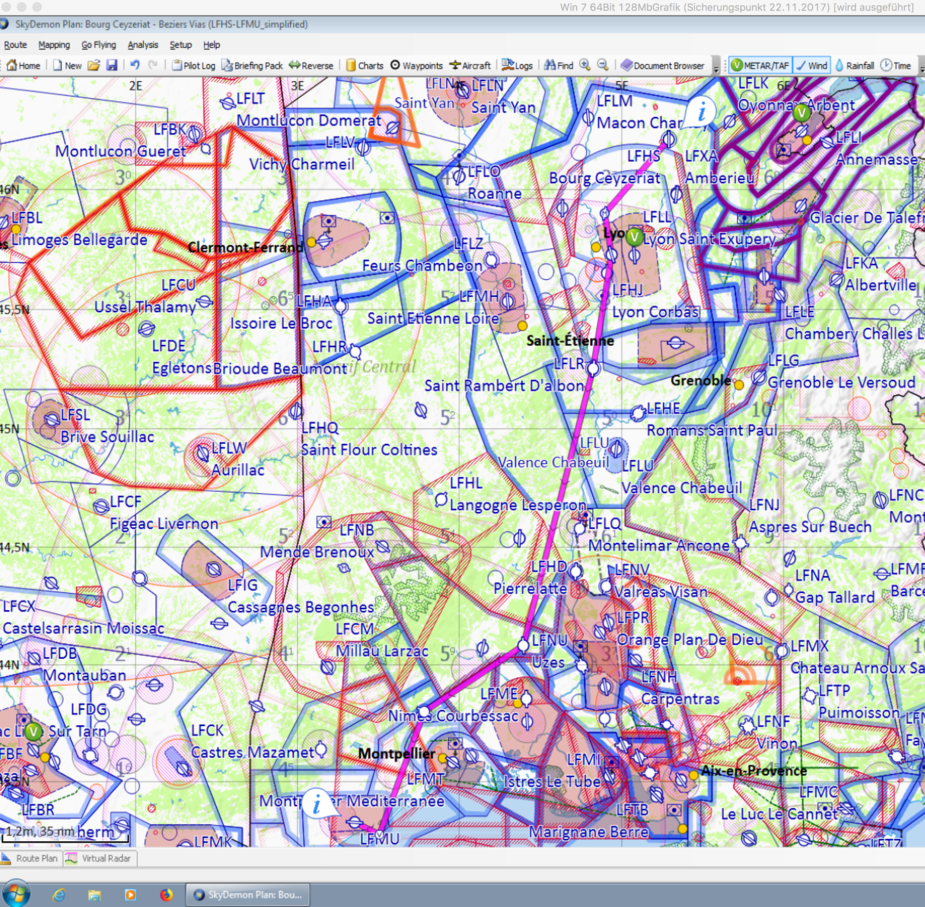 One small point: you should not be filing flight plans with aerodromes as waypoints. This is contrary to the ICAO FP format. If routing via aerodromes, better to choose some navaid located there.

Best thing of all is to file via IFR waypoints (navaids, airway intersections, etc) and route well away from aerodromes. That avoids their circuit traffic. And ATC understands these waypoints. One exception to this is that in most countries ATC is likely to force a routing via a VRP when departing or arriving – see e.g. here.

It may be hard to cross LFMI/LFML TMA, at more than 1000ft, and once on the cost, you may have to comply with cost path until you go after Montpelier (the green dotted line on SD, at the altitude). It depends mainly on the current IFR traffic. Once I could go from Nice to Beziers FL70 because Nice-Info negotiated my flight overhead LFML (I didn’t filled any FPL), just on the radio. Once at LFMU, for the return part, I had to cross until LFMQ by the cost line between 500 and 1000ft, because there was a lot of IFR flights between LFMT, LFMI LFML, LFTH until STP Vor.
For a quicker end of flight, a_kraut path is better by avoiding Nimes and Montpellier airspaces, but rather boring.
What my instructor said (pretty experienced) is that everything could be negotiated on the radio, with a few exception. Based at LFMD, we have Nice TMAs and Italy on the east, Canjuers LFR138 (MIL) and mountains 8000ft north, LeLuc LFR95 (MIL) and Toulon TMA on the West… We have to negotiate all the time for transit. Actually all are very straightforward except LFR138 because this is heavy weapon training (tanks, rockets… ). Even airliners are not going this way as it’s SFC to FL540.

About the VRP, sometimes controller only knows their own ones. I mean if you are in Marseille FIR with Marseille-control and you talk about VRPs of LFMA, LFMD, … they sometimes doesn’t know. Sometime flightplans are accepted by calling them with the 2last letter of the airfield and 2 last letters of the VRP, such as MDDR for DR VRP on LFMD. But it’s not a rule, and on the radio it could be tricky.

Once you are in a CTR, you have to have a good idea of where they are, such as SA ES, SW in LFMT airspace, because they will probably route you there when getting in the CTR.

LFR55D (Orange Zone) is straightforward to cross after radio contact, unless you are bothering them, as for LFR55.

greg_mp
LFMD, France
14 Posts
This thread is locked. This means you can't add a response.
Sign in to add your message

Your greatest trip of 2019?
Easter VFR trip to Rotterdam/Bruges
Cologne visit over Easter
Plan B: VFR to Croatia Easter 2019