But maybe I should go and stand next to Son Bonet’s runway, stick my thumb into the air and hope that a certain Swedish reg DA42 sees it?

Assuming it’s going to be Oct/Nov, I am available except for the weekend of 5 Oct and 2 Nov.

As to destinations I guess it needs to be an IFR/customs field? Or does age finally starts degrading Peter’s bladder range and dexterity to pee in a bottle? In that case we have a larger choice, like Fuentemilanos, very close to the wonderful city of Segovia. Not IFR though, and no easy IFR alternates nearby..

I can always pee into a bottle

It looks like around “7 aircraft” expressing interest so far.

Is there anyone else interested? I can then start a spreadsheet to see what the overall picture is.

What locations would be of interest?

I have been to quite a few, including a number of meet-ups, there e.g. San Sebastian, Pamplona, Zaragoza, Barcelona, Salamanca, Menorca, La Axarquia, Granada, Merida (Badajoz), Valencia, Burgos, and maybe some others. Of these, the ones I liked most (for a potential meet-up) were Zaragoza and Salamanca, and we have not had EuroGA meet-ups there.

Ones I haven’t been to but meant to go at some point are Santander, Bilbao, Jerez, Valladolid… but I am not suggesting all of these are worth doing at all.

We could also do Son Bonet LESB at Mallorca but it requires some of us to make Schengen stop prior to landing there.

Zaragoza and Salamanca, and we have not had EuroGA meet-ups there.

Zaragoza sounds interesting but bandling is mandatory by Argon Air. I don‘t have any experience with them.

Salamanca doesn‘t allow VFR flight during the week. So this would be a severe restriction when arriving on Friday for some of the pilots here.

I have emailed Zaragoza airport and the handler. The handler replied with 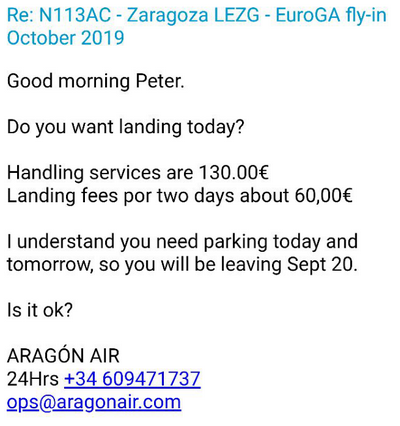 so they didn’t read the email (I should have google translated it also) but I think the costs of nearly €200 rule this out for most people.

Any other locations of interest?

I don’t think Majorca will have many coming because anybody can get there by airline for next to nothing, and most already have. This is always an issue with fly-ins. Those done to popular airline locations tend to produce a very small turnout.

Peter
Administrator
Shoreham EGKA, United Kingdom
66 Posts
This thread is locked. This means you can't add a response.
Sign in to add your message

Merida (Badajoz LEBZ), Spain, 2018
Spain October/November 2016 (Burgos LEBG)
End 2019 meet-up at Le Touquet (LFAT) on Sunday 29th Dec
Treatment of arriving flight for Customs/Immigration - based on airport of departure, or based on passport?