Looks like you had a great trip! Thanks for sharing it.

Thanks for these beautiful pics!

The next leg was 70nm into the Dublin CTR to a farm strip which I hadn’t visited before, or checked out. The owner kindly gave permission and the strip is only 5 minutes drive from my relatives. This is where the Super Cub comes into its own. The wind favoured the northerly runway which is a generous 500m and has a clear approach. The first third has a bit of a gradient, perhaps 5%. The next day I planned a few circuits to get some relatives up in the Cub, but the runway would be the easterly one which has trees on approach, and electric lines on departure. It was also only 400m and because of the trees the LDA is probably only 300m. Not as generous but in a Super Cub perfectly acceptable, even when factoring wet grass. The strip has some great examples that operate there: a macho Maule M7-235, a M7-180, a rare J-4, and two L-4 army cubs. The big Maule travels regularly to Poland which speaks to the versatility of this type. Am not sure I would be comfortable in a Cessna 170/180 in the strip with 300m useable, but the Maules seem to shrug it off.

This leg was a preview of the next day return flight, winds had picked up from the NE with Dublin ATIS reporting 15 knots with gusts to 25. Ground speed was a leisurely 50-55 knots, so a bit faster than the trucks on the highways.

Shannon handed me over to Dublin warning of parachuting at Clonbullogue which I kept to my E routing via Tullamore. Then onto Dublin tower who asked I route Dunshauglin and Ashbourne – here the excellent easyVFR helped route as directed. Dublin Tower were brilliant handling a VFR transit only a few miles north of the ILS 10, very courteous and professional. Despite the wind the air was smooth and I had a nice view of the countryside in the long light. An interesting amount of the land is devoted to peat harvesting in this area, which presumably will be phased out in due course for CO2 emission reasons. 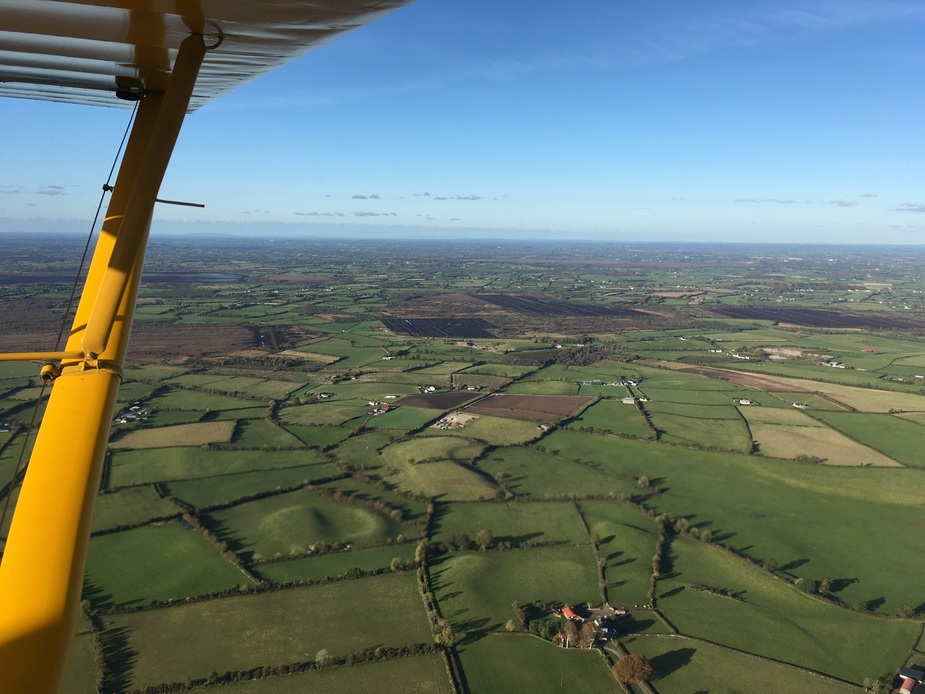 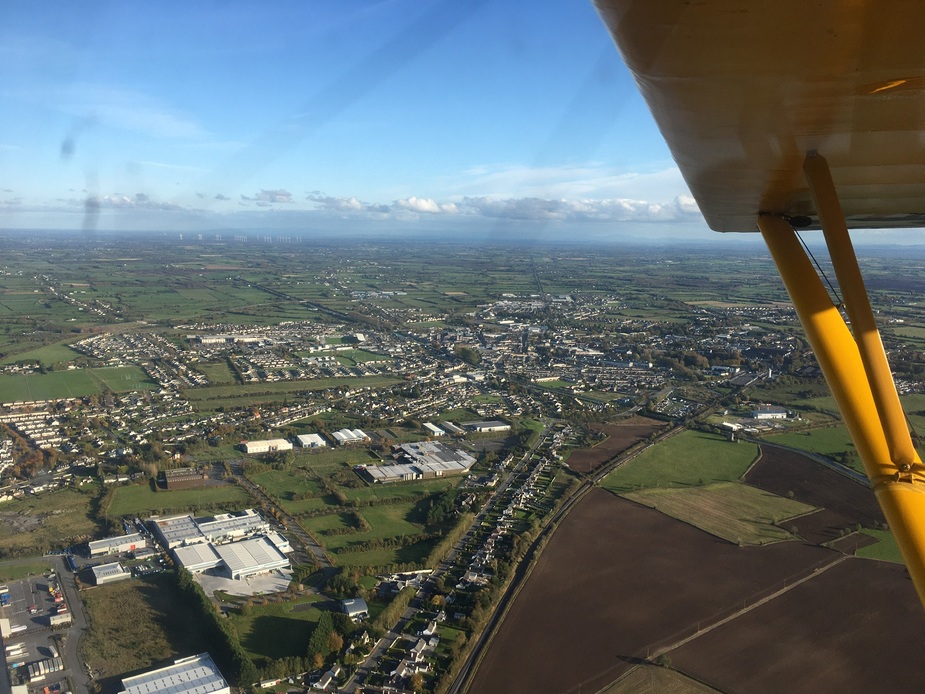 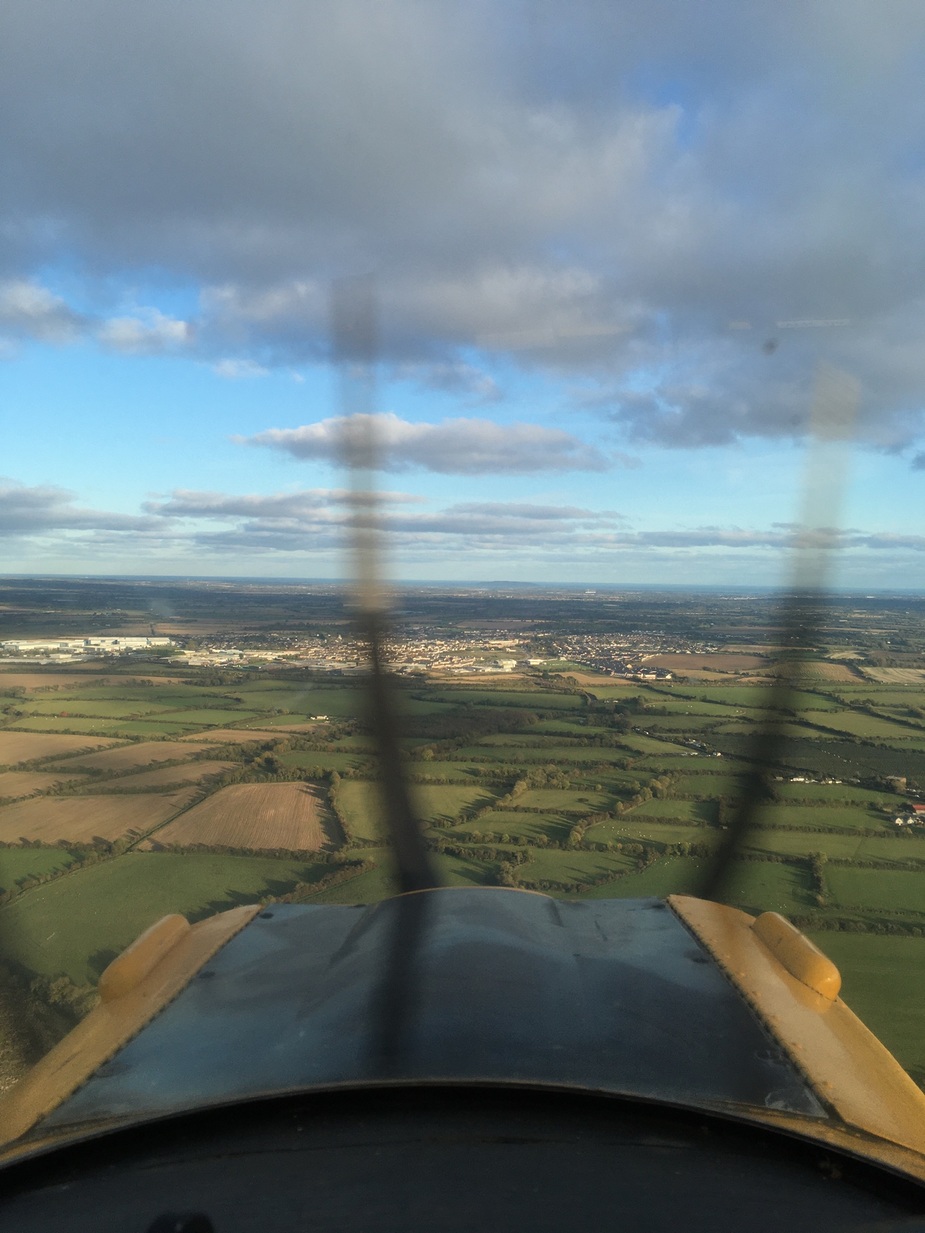 One take away is to ensure when you close your flight plan inbound make sure Shannon liaise with Swanwick. I had a few calls from Southampton checking I wasn’t overdue at Birr. Which is nice that their system works, but does not appear to be joined up with Ireland.

Very nice, thanks for sharing Robert.
Wrong direction though as you promised me that you would show her to me over here. OK, won’t pester you any more ;)

Don aart I do hope to make it to both Belluno (one of the sacred sites of mountain flying in Europe) and beautiful Mallorca!

The final leg was from the farm strip direct to EGTK Oxford. Enstone doesn’t appear on the list of airports on the GAR form, so adopting the usual caution for an international crossing inbound to the UK I arranged to land at Oxford. The main constraint was the short day and a stonking headwind. Form 214 suggested that it was slightly weaker above 5,000 feet. Dublin tower were again very helpful, allowing some circuits at the farm strip maintaining below 1,000 feet. The farm strip owner kindly let me fill the tanks, again around 17 litres per hour, and I set off at 12:30. Dublin cleared me eastbound via Skerries below 1,500 feet. 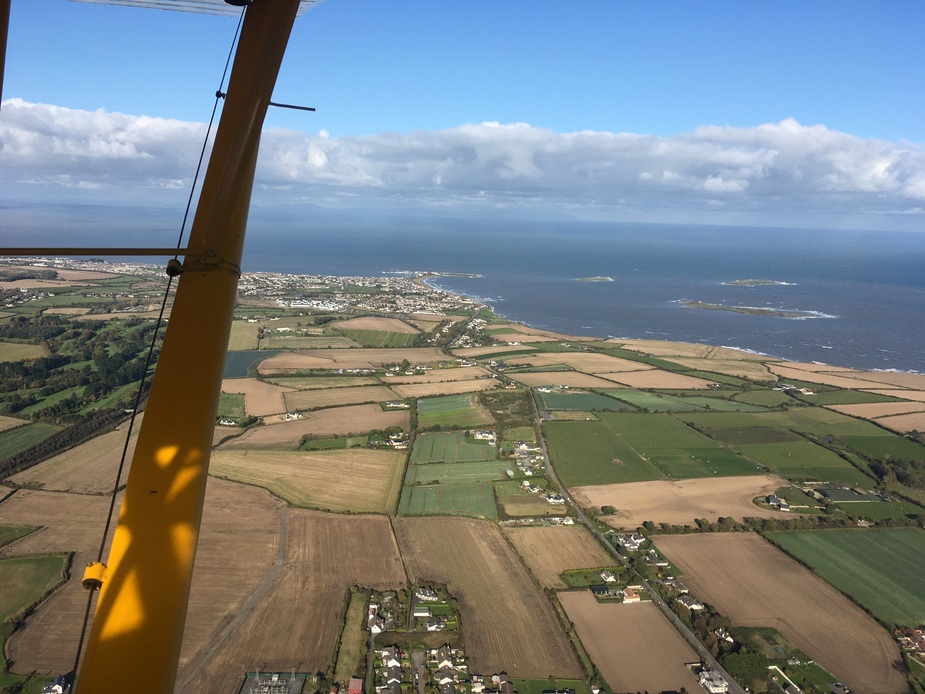 Once around 10 miles out to sea I was cleared to altitude 5,500 feet, where the Super Cub delivered around 50-55 ground speed. This worked out to around 25-30 knot headwind with 82 KTAS. My SC has a mixture control and I use it whenever below 75%. The long oversea crossing produced heightened engine noise sensitivity and more frequent use of carb heat. No auto rough that some people experience over water, but just more careful monitoring on the one hour plus crossing. D201 was active south of D201B. I was handed over to Valley and was inside C airspace – which while in the Holyhead FIR, is under Dublin control. I was above a scattered SCu layer. Smooth conditions, but glacially slow. 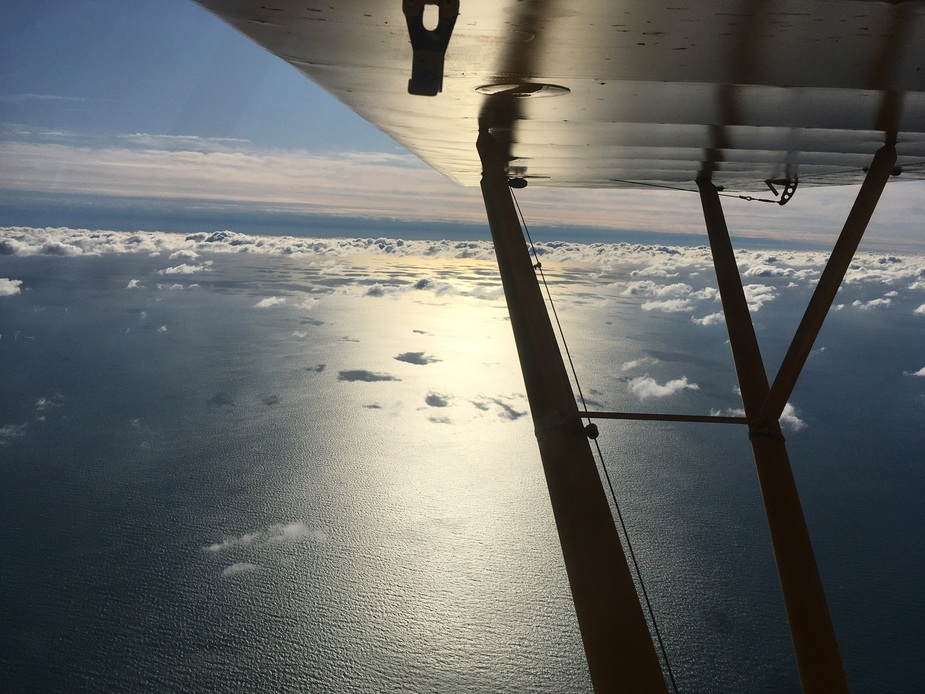 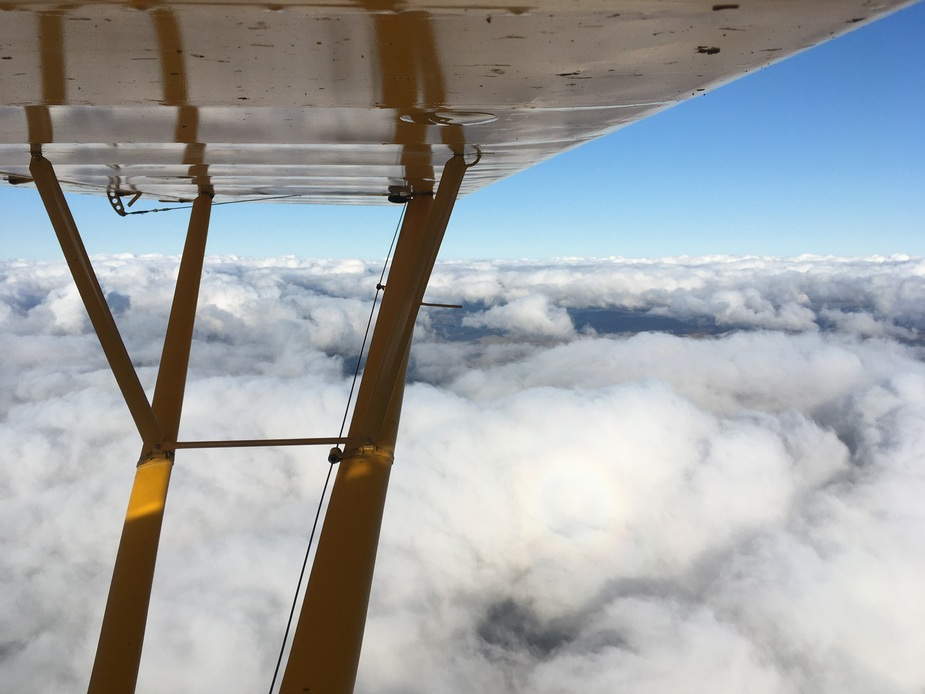 My battery a lead 12V 12AH, was starting to feel the strain, mainly of the T21Mode S which had been used when in Valley, Shannon and Dublin airspace. My SC being a non electric type is not required to have the TXP on, except where required in CAS, and in effect I husband the use of the TXP to ensure I am able to squawk where necessary. A big takeaway is to bring the trickle charger on overseas trips – duh!

As a consequence I went QSY and NORDO when I coasted in over Caernarfon. The rest of the flight was straight forward with nice views of Wales, the SC painting a glory on the SCu scattered to broken layer beneath, and good view of the flooding around the Severn. 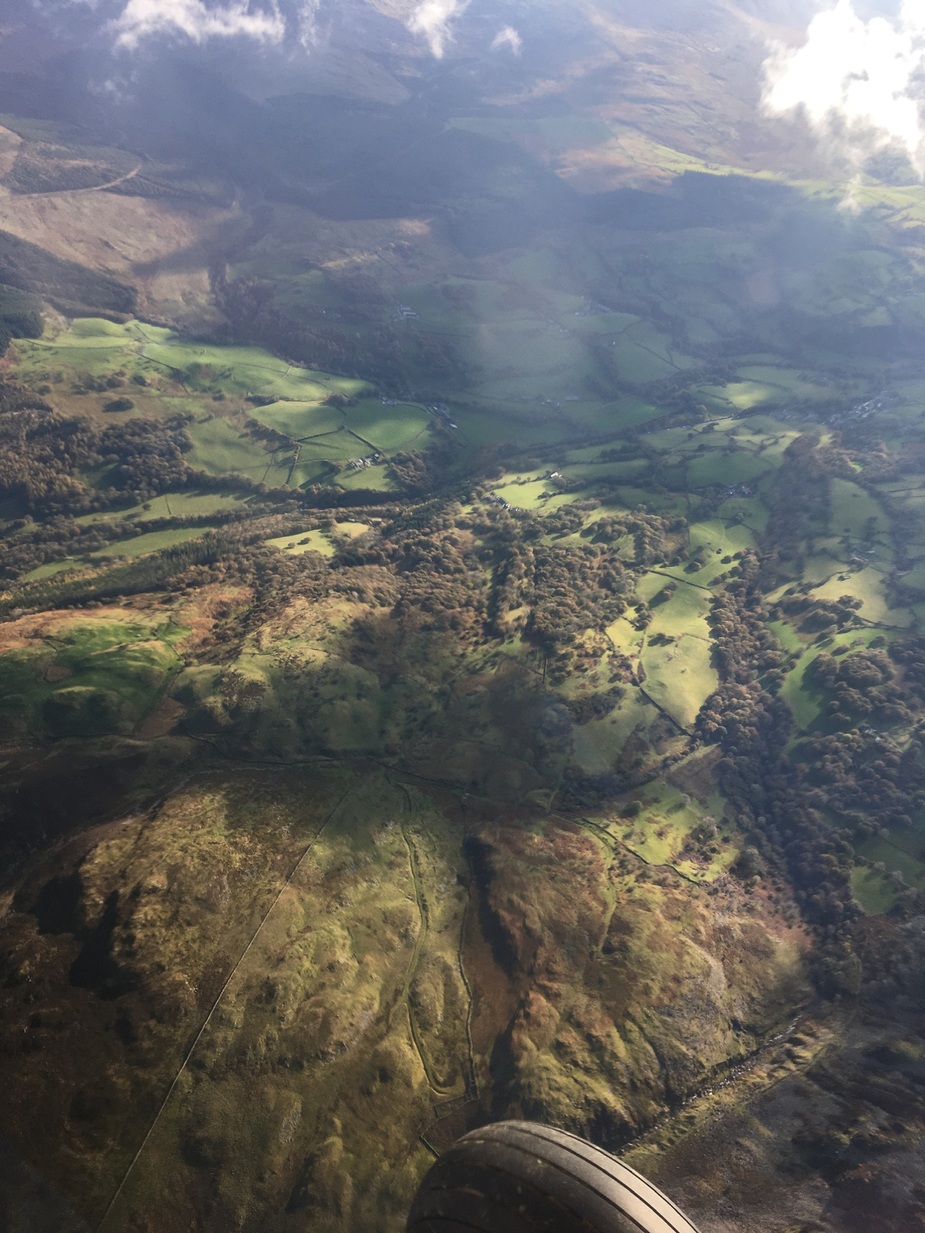 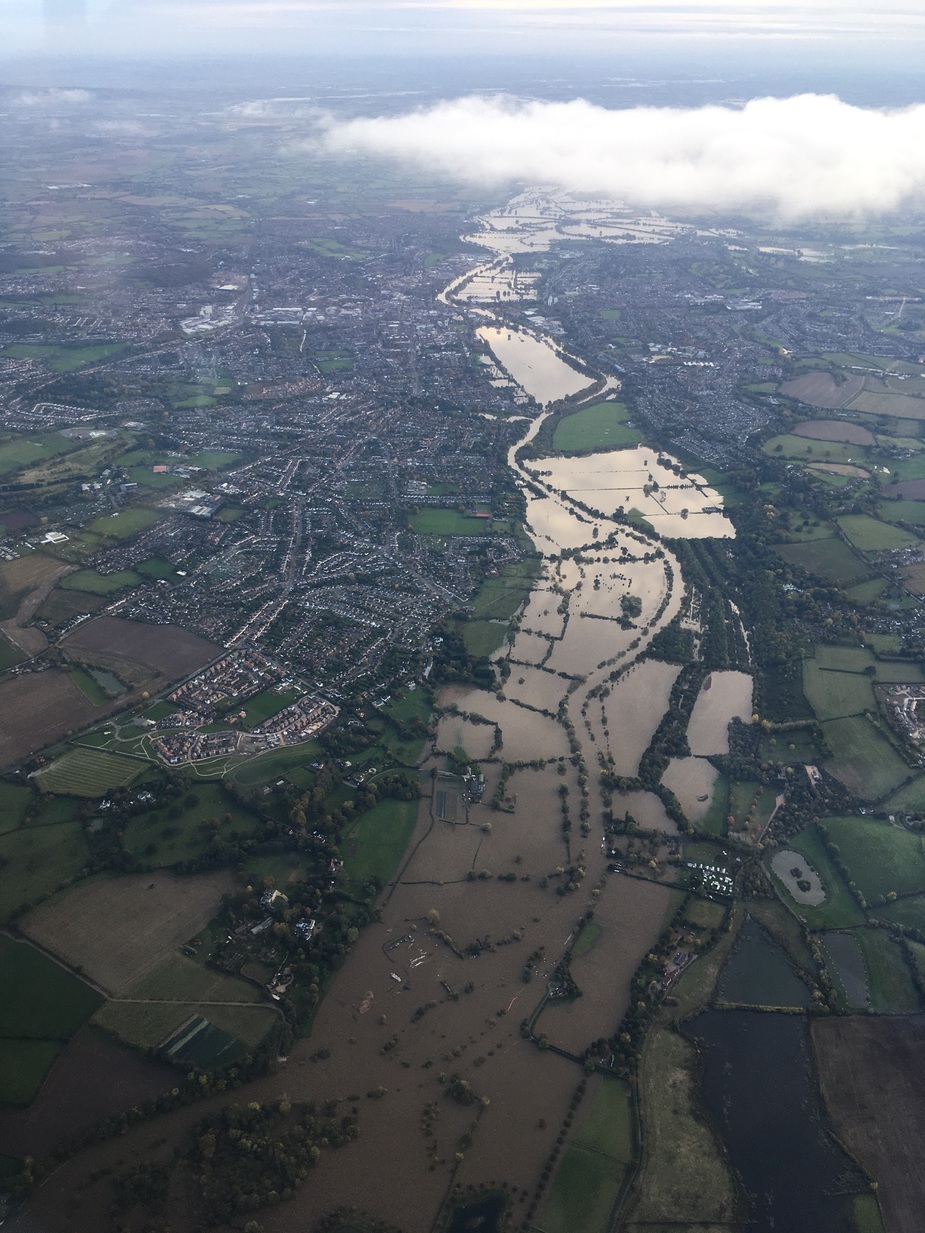 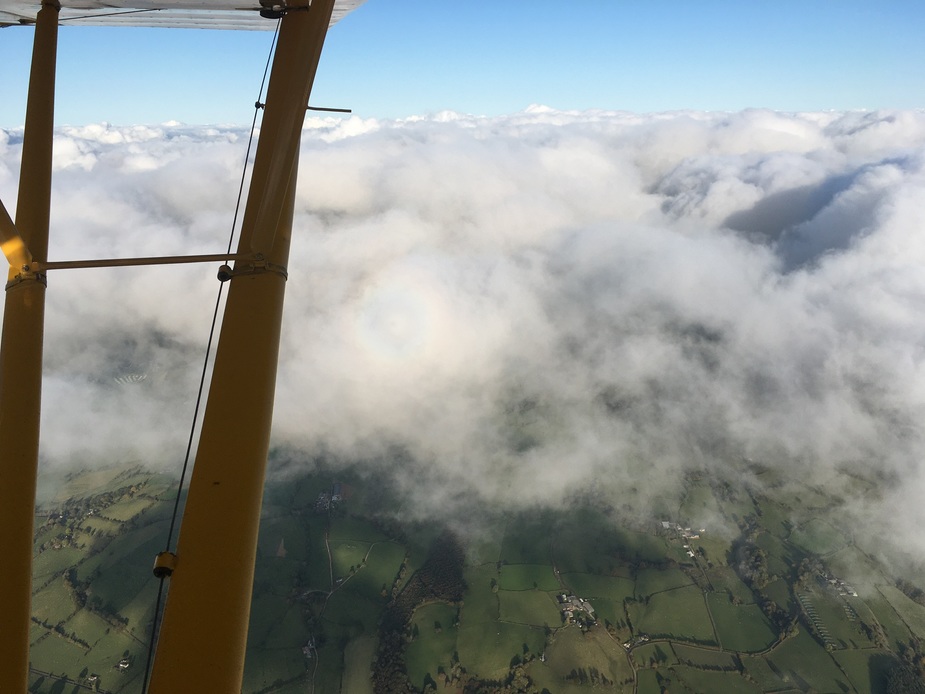 The ground speed improved to 60 knots and I contacted Oxford abeam Chipping Norton with an ETA of 1625. I managed to get the necessary RT calls in, but read back for landing clearance was unreadable. I was parked between a Falcon 7x and a Citation XLS, unfortunately Oxford is strict on photography so was not able to capture the near 70 year young SC parked with the heavy iron. After very efficient turn around on landing fees (the £10 fee is now history, but £21 gives you access to the crew room). Departure was on the handheld iCom for a quick dash to Enstone, landing in the gloom 10 minutes before end of civil twilight. Fuel endurance in this artillery spotter is not an issue, around half tanks at Enstone after four hours plus since Dublin. This is partly to flying at 5,500 feet, leaned engine and solid 80 KTAS on an estimated 15/16 litres per hour. To lbra’s question the SC heater system (basically a flap letting hot air from the area near the exhaust manifold into the front footwell), requires warm clothes. It sort of works down to around 5 oC, once below freezing your feet start to become ice cubes – not ideal when dealing with a tailwheel in a crosswind. Wear thick socks and good shoes! Which I was.

The SC had no tech issues, but this trip should have had more margin on battery capacity and daylight hours. I was ready to stay in EGTK if departure had been delayed, but a good hour before end of civil twilight is a better plan in the autumn and winter.

Apart from the Husky, Maule, SC, Stinson types am not sure I would venture to farm strips unseen. The Cessna 170/180 would find a 300m strip a challenge, and tri cycle gear needs to know the condition of both the soil and grass (length). The 180HP constant speed Maule seems to be a nice practical tourer that has the realistic option of using farm strips. The SC found the farm strip moe than adequate landing and taking off in under 100m.

One last word on how pleasant GA is in Ireland. Charming professional ATC, the super friendly GA community and the wealth of practical airfields for tailwheel aircraft makes it one of my favourite countries for GA.

It is also where I found my SC many years ago, so it was good it was back in the champagne air of Ireland!

Nice photo of the SC departing back for UK 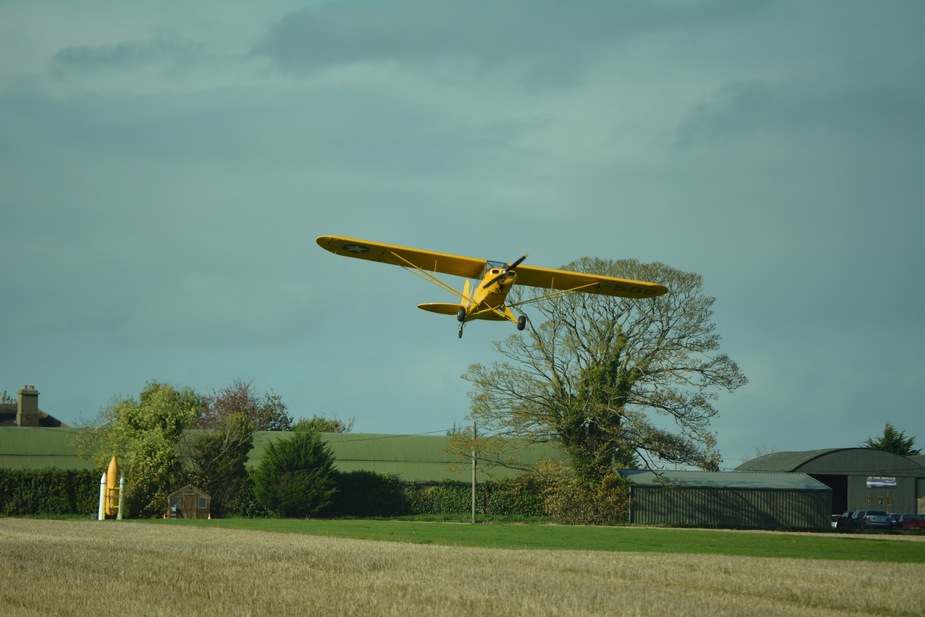 If you file the GAR with 12 hour notice you can land anywhere from the CTA (the Channel Islands might be different due to customs, but Eire and the Isle of Man are (at least until the Brexit disaster happens) all in the same customs area, so it’s only for the police). You can add new landing sites to OnlineGAR. I’ve added things like beaches to OnlineGAR. So next time you do it, you don’t have to land at Oxford :-)

It’s too bad we need to do it at all, to be honest. The Red Tape Challenge recommended it be abolished completely, but the police want it because, well, the police never want to give up a power they have and said “they want to build patterns of travel” – in which case, why does it need 12 hours notice, why can’t it be just a notification?

@alioth thank you, I think also sending the GAR to Enstone would be good belt and braces

This is a very easy fix. I have a sealed 26 amp hour battery that will fit a standard aircraft spruce box, I can get them for 80 euro ish. I had one in the Alpi and bought one for the Luscombe. I fitted one to the J3 also under the rear seat. You can get the Oddessy 680 if you feel like spending more.

WilliamF
U206F, J3 Sea, PA32R & others
EIBR
20 Posts
This thread is locked. This means you can't add a response.
Sign in to add your message