I am loathe to jinx my next steps, but by way of update, a Beechcraft Bonanza (with a Piper tail, as the later Debonairs are called) became available closer to home. I had flown a V-tail M35 which I enjoyed, but had not flown a conventional tail Bonanza, or for that matter an example with the Continental IO-520BB. The seller kindly let me fly the aeroplane from his local airport (shortish grass strip) and I was immediately impressed by the control feel and build quality. Aircraft on N reg and going through the USA style escrow/change of registered owner process. The seller also kindly introduced me to a buyer of the Warrior, and hopefully this sale concludes next week.

Being of a slightly superstitious nature will disclose all when sale concludes, but very impressed by the aircraft and by the seller’s team.

I will wait until I have a decent time on the type (Alan Cassidy always said the first thousand hours on type are the hardest), but I did find the conventional tail Bonanza a more precise platform than its senior, and lighter brethren, the V-tail M35. It didn’t have the negative spiral stability aspects of the V-tail, and while around 250 pounds heavier than an M35, the control harmony was excellent. My suspicion is that in the V-tail I flew, the rudder-vator/aileron interconnect was rigged a bit too tight. Conversely neither the V-tail or the conventional tail example exhibited the famous Bonanza tail wag, and perhaps this was as a consequence, in the case of the V-tail, having a slightly over rigged interconnect.

The modern Bonanza has some improved systems, in particular the flaps are on a pre select (UP-APPR-DN), while the earlier types required counting seconds for flap setting. (another fond memory of an Alan Cassidy saying, if you started counting one-banana, two bananas Red Arrows style, he would intone with the right amount of teacher sarcasm, ’ we are not in bl**dy Kindergarten we don’t count with [expletive deleted] fruit’). It also has a 28V electrical system, which combined with the electrical landing gear motor (a lot of aircraft use electro-hydraulic systems), means the gear cycle time is very short, and the aircraft is so well engineered, the closing of the gear doors with a 28V system results in a noticeable small pressure change in the ears.

The modern type also has higher gear and flap operating speeds and it is quite easy to slow down in the circuit. Low level cruise at 55% shows 145KIAS, or around 150KTAS, but at 75% it will achieve 160KIAS. Gear down and approach flaps, it flies comfortably at 90KIAS downwind, and slowing to 65KIAS (two up and half fuel) over the fence. At this airfield the practical landing distance available is around 600m, and it used half this distance with minimal braking. Very easy to fly accurately and land. Slow flight is quite benign, if not quite Piper Warrior benign, it didn’t exhibit any tendency to drop a wing in non-accelerated slow flight.

I have flown the SIAI Marchetti SF.260 and I enjoyed the modern Bonanza, both have similar roll rates, but I don’t think the Bonanza owes anything to the SF.260 in control harmony, and has the edge in slow speed handling.

Will give a further update when all is closed, but then will resurrect, as I hope to at least make the North Atlantic crossing in 2023. The aircraft still has its raft and immersion suits from the original crossing on delivery to Europe.

The spiral tendency is demonstrated in all the Bonanza types as part of the BPPP training syllabus. All do it. Also the tail wag is virtually indistinguishable from the real Bonanza and the one with the Piper tail (AKA trainer tail). I can’t see any difference between an F33A and the V35B in this respect. You will enjoy the extra performance of the IO520. At 8000 MSL, you should achieve 168 Kts at 12.5 GPH or 175 Kts at 16 GPH. Good luck on the acquisition.

Picked up the Beechcraft F33A and it flies nice and straight with a strong engine. The seller kindly saved me the transatlantic ferry as the aircraft was in Yorkshire. A previous owner threw quite a lot of money at the panel, but it is in effect twenty year old kit with a few gremlins, plus an original KFC200 which needs TLC. May go down the line of upgrading the AI/HSI to an Aspen, as they seem to work well with the KFC200, but in the short term will focus on powerplant and airframe, checking hoses and addressing some minor surface paint blemishes. It will live in a climate control hangar which combined with zinc chromate factory corrosion proofing hopefully means the airframe remains pristine.

Beechcraft has a time-in-service SB recommendation for most systems components, and while I don’t plan to follow it, all the components will get a good inspection and decide whether they need replacement or overhaul.

The later vintage have a quieter interior than the earlier models, and a very solid ride but with nicely harmonised controls. Despite some turbulence it flew hands off nicely, and I didn’t detect any tendency to fishtail or dutch roll.

Downside to F33As in the UK is that they are >1.5 tons, which means eye-watering landing fees at some places there.

@NCYankee is a collector of empty weight and CG data. Last time it was weighed it came in at 2292 lbs empty and 81.6 inches, with fifth seat. With around 1,100 lbs useful it is a three hour cross country and four light/medium adults (160-170 lbs) with light baggage.

In a purist mode I might strip back the vintage avionics and upgrade the 530 to a 750xi, Aspen, overhaul the servos and control panel on the KFC200, repair the remote DME and shed the AM/FM/CD player, shed the stormscope, and possibly the TAS. Keep the 430 as a standby, and generally inspect all the avionics wiring. The aircraft has standby vacuum and alternator but I don’t get the sense it flew that much IFR. There is probably 50 lbs of weight savings, but the Aspen, if it allows removal of the vacuum system, might in fact move the CG back. Avionics budget not a priority until airframe and engine components have been inspected closely.

which means eye-watering landing fees at some places there.

Thank you @Peter at least it doesn’t attract airway charges :)

What year is your F33A? The W&B is good for an F33A. What kind of Stormscope? I just removed my WX1000+ Stormscope for an upgrade to a WX-500. I usually operate my Bonanza at any altitude below 10000 feet by setting the fuel flow to 12.5 GPH. In my Bonanza, I use 2450 to 2500 RPM, as that is where the engine runs the smoothest. I expect 168 Kts TAS at 8000 MSL and about 159 Kts TAS at 4000 MSL. The Bonanza tail wag is largely indistinguishable between an F33A and a V35B, but since the pilot sits close to the CG, it is noticed more by the rear seat passengers. Here is a recent picture when I dropped my Bonanza off for an upgraded panel, I am replacing the G500TXi 7 inch display for the 10.5 Inch display. The old 7 inch display is for sale. I installed it because it is easier to read than the Aspen. 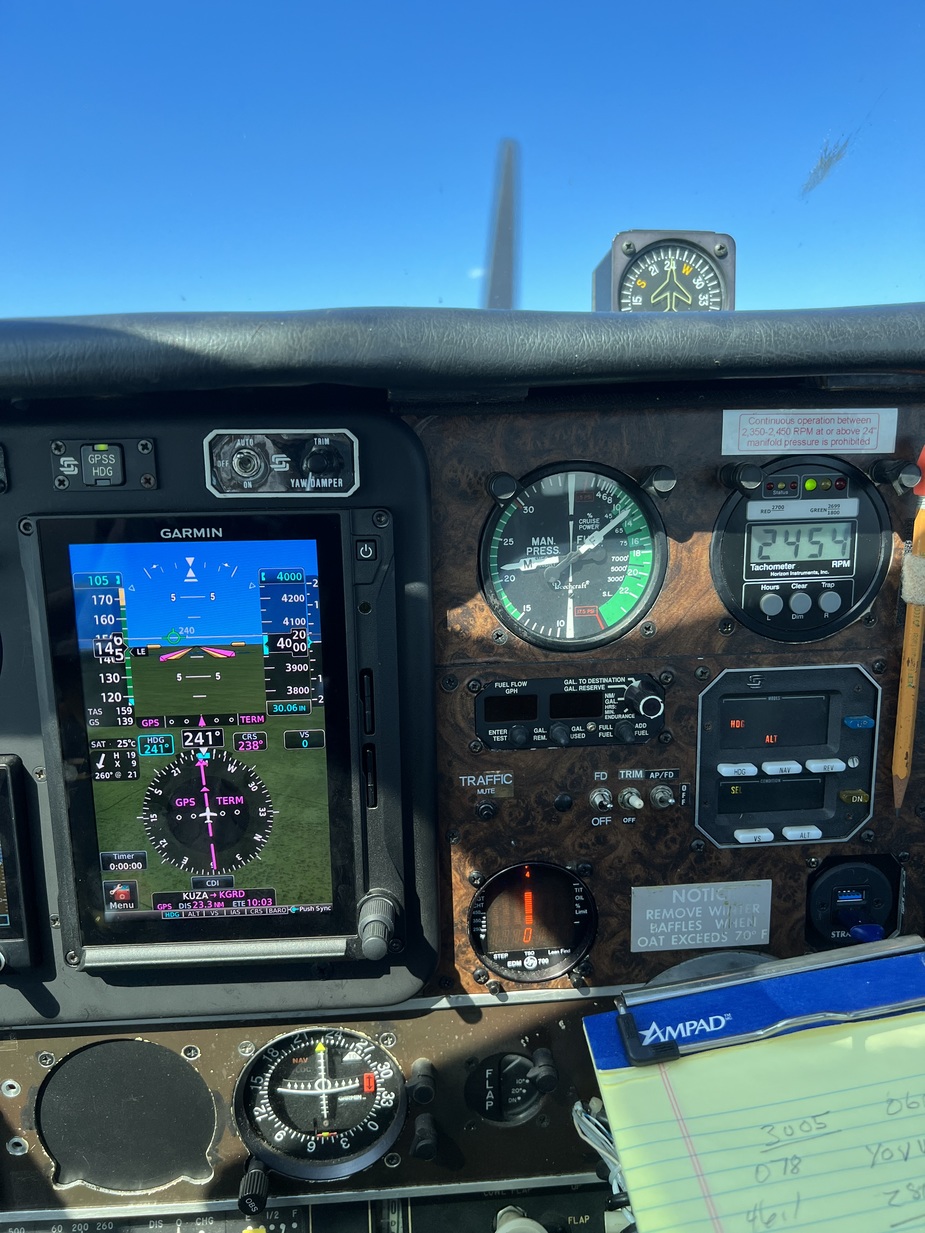 Hi @NCYankee it is a 1981. Not sure what model Stormscope will investigate. Have used Stormscopes and they are useful strategic avoidance tools. I regard embedded TS as a no go in a puddle jumper, so any TS avoidance I plan is using Mark 1 eyeball. At piston speeds the ‘gaps’ from a stormscope (I give a 50nm avoidance) can fill quite quickly. Remember UK has less in the way of TS than the Carolinas :)

RobertL18C
Oxford (EGTK), United Kingdom
82 Posts
This thread is locked. This means you can't add a response.
Sign in to add your message

Mooney makes a comeback
Dynon Skyview HDX got an FAA STC
60 year old ex Army Pilot getting back in the air?
Are all UK/LAA homebuilts safe?