This is a brief write up of our trip to bring N394SE a 2006 Piper Malibu Mirage back to the UK. I bought the plane and then had conversion and FAA IR training in it over the course of 8 days in October. The aircraft is a pressurised single piston powered aircraft with an Avidyne Glass Cockpit, 2xGTN650s newly installed and a DFC90 autopilot.

The flight to CYYR was actually quite uneventful although we ended up having to make a night landing which we were keen to avoid with the idea on such a long trip to stay day preferably VMC - although we of course filed IFR for the whole trip. 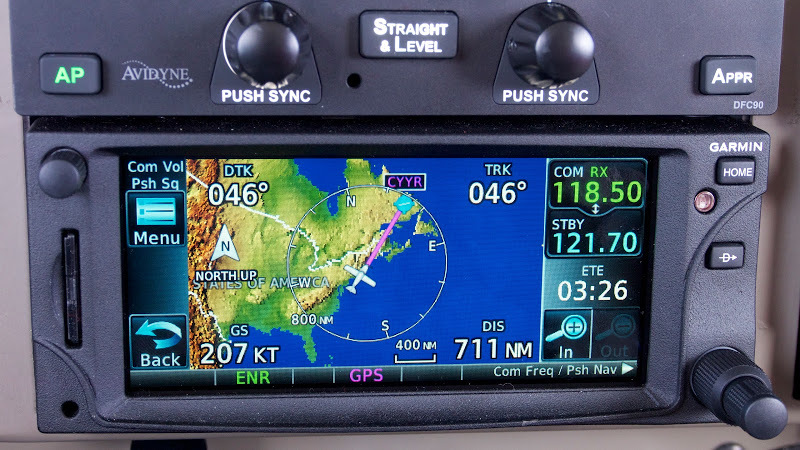 The key in Canada was to fill the tanks for as much flexibility as possible. The aircraft uses 23gals/hr in high power cruise at 213 knots TAS. So with the climb that gives around 6.5 hours no reserve endurance. This can be substantially improved with a lower power setting. We flew the entire trip at Vy climbs and 75% power at FL250.

So that night we loaded the survival gear (from Andrew at Far North Aviation) and filled the tanks before enjoying a meal at the hotel near the airport. 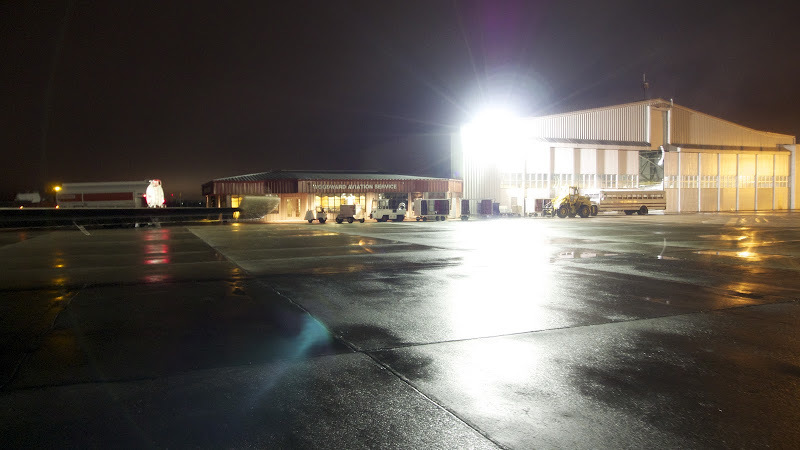 An early start to get going was in order so we could make Iceland that day. A temperature just above zero made the walkaround a bit chilly. Departing Goose Bay just before dawn was the most nervous part of the trip for me as we were over the ocean for the first time. Position reporting and less reliable VHF did add some complexity to the process. That said, the electronics on board made that side of it painless. The sun rose and all was good. We had about 2.5 hours until Narsarsuaq which was forecast to be VFR. 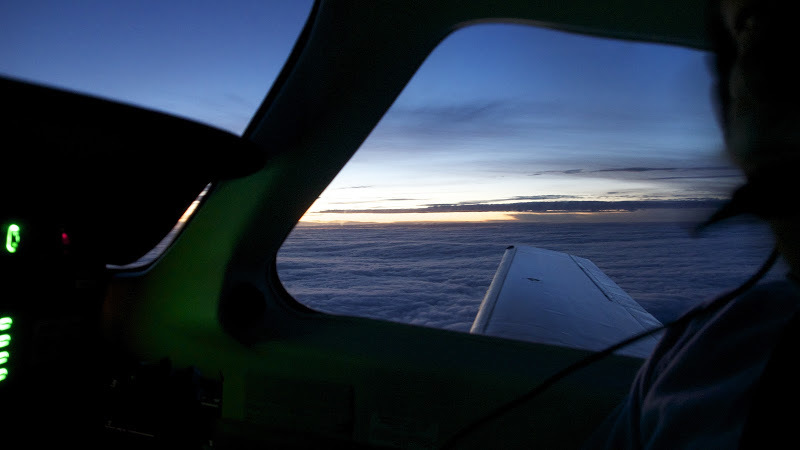 As Greenland came into view we were amazed by the scenery but also pleased to be able to see the ground during the NDB approach. Although we both agreed that perhaps IMC would be better as you couldn't see how close the terrain was. 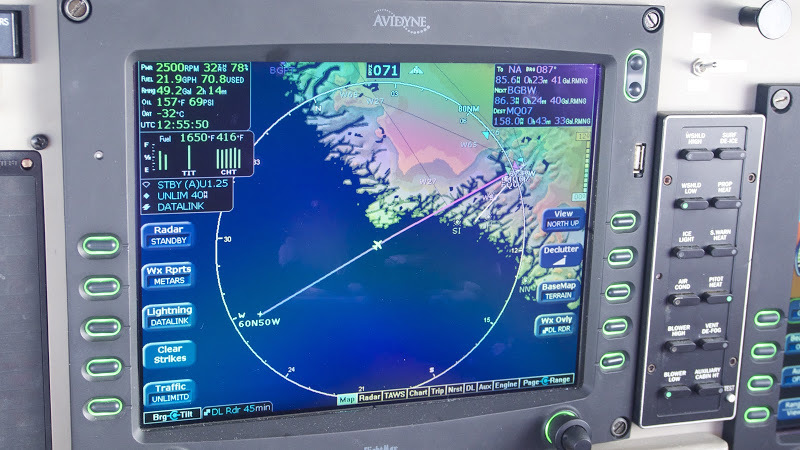 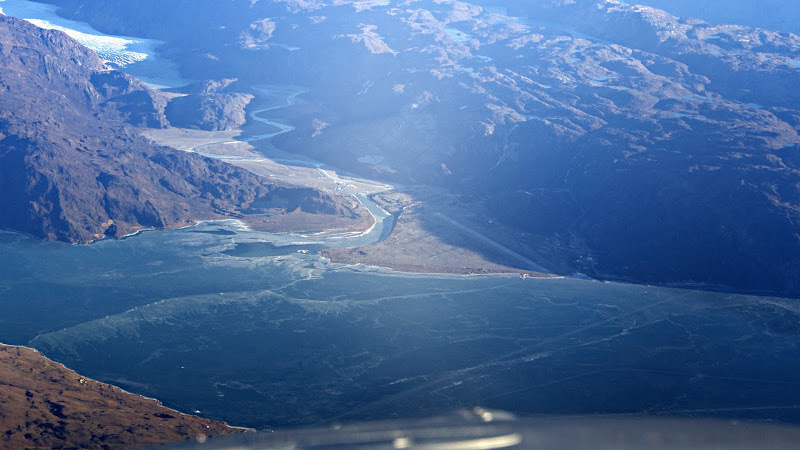 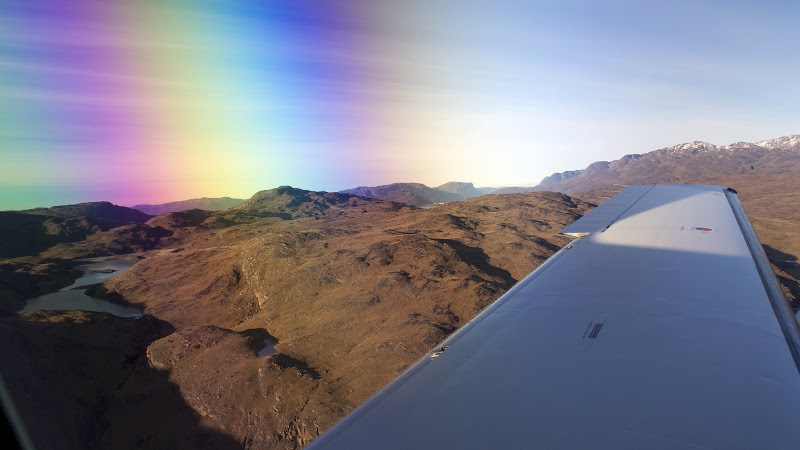 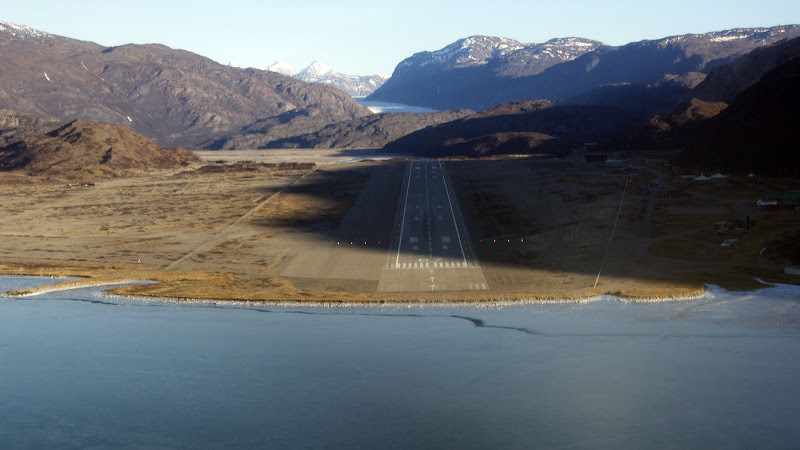 A straightforward landing and a 25 minute turnaround was excellent. Only blip was the mandatory credit card company security-based decline. At least the other card worked. The company seemed a bit confused about how my card was now being used in Greenland after Boston the day before. 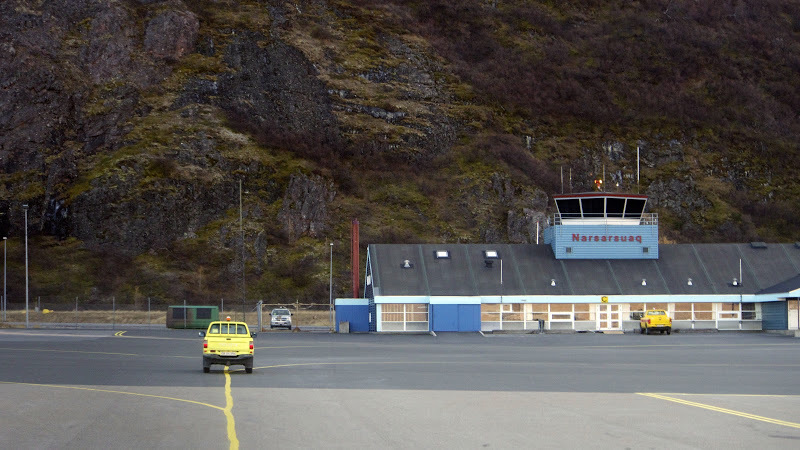 We readied the aircraft for Reykjavik which was forecast to have winds of 20-gusting 30 worsening during the day so we were keen to get going. After a wonderful crossing of Greenland we were notified of a Sigmet for most of Iceland which meant winds were now expected to reach 70knots. Naturally we needed a change of plan. Sondrestrom was very helpful and an almost tour guide like controller suggested Kulusuk (she "always wanted to go there as it was so beautiful"). As it was also 1.5 hours closer to home, we agreed after checking the weather and runway. VMC and gravel was fine.

We had a great run North Eastward up the Greenland coast and proceeded to land on a runway coated with a few mm of snow. It felt like Asphalt and was a non event. 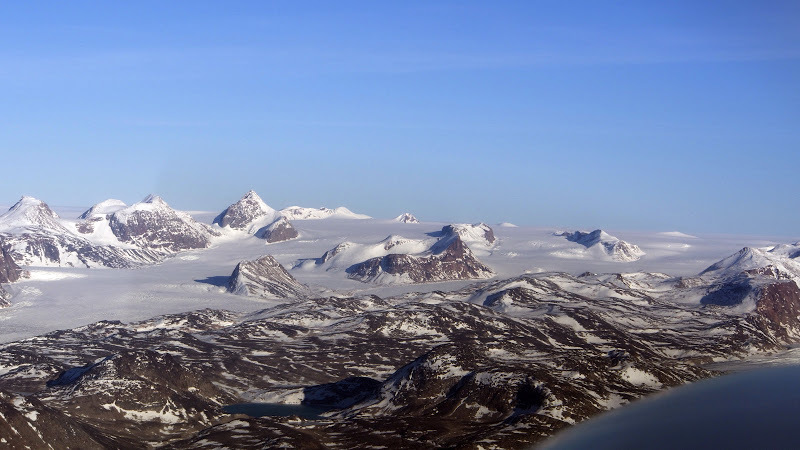 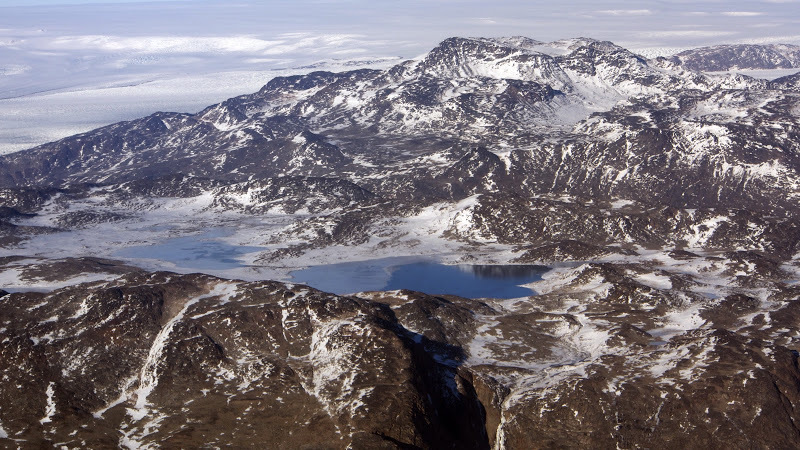 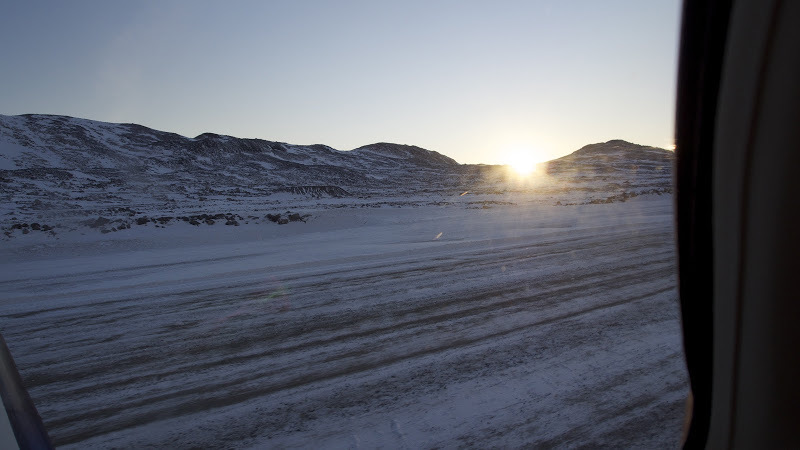 We went up and had a chat with the controller after refuelling and were told we could get away at 11GMT (8 local) when the airport opened. If we didn't leave the next day the airport was closed Sunday AND Monday. They could of course open for a big charge but we resolved to get out if we could. We were the only guests in the hotel and narrowly avoided being run down by a sled pulled by dogs. Was absolutely beautiful staying on an island surrounded by mountains. 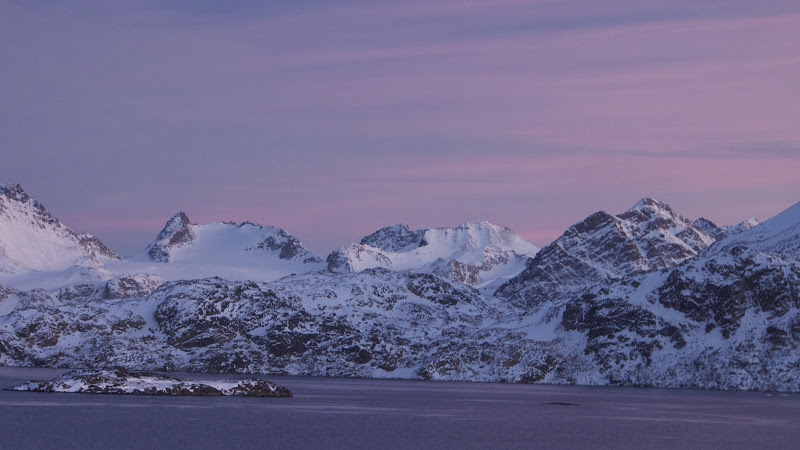 So we checked the weather in Wick (our first plan) which was messy but fine for an IFR arrival. Reykjavik also looked landable now. But we realised that Wick was closed after 5pm and it was unlikely we could get away in time to make that. So we decided on Vagar in the Faroe Islands. While its reputation is poor due to weather, it had a LOC approach and we planned top be there at 1640 - a full 20 minutes before it closed. When I say closed I mean the time after which they would charge us $700 per hour for staying back - as of course they knew we were inbound. Our plan was to make a decision over Iceland as to weather Vagar remained a go due to weather. Having an MLX770 with in flight Metars, TAFs, download radar and IR satellite meant we could confirm it was clear and pressed on past Iceland. 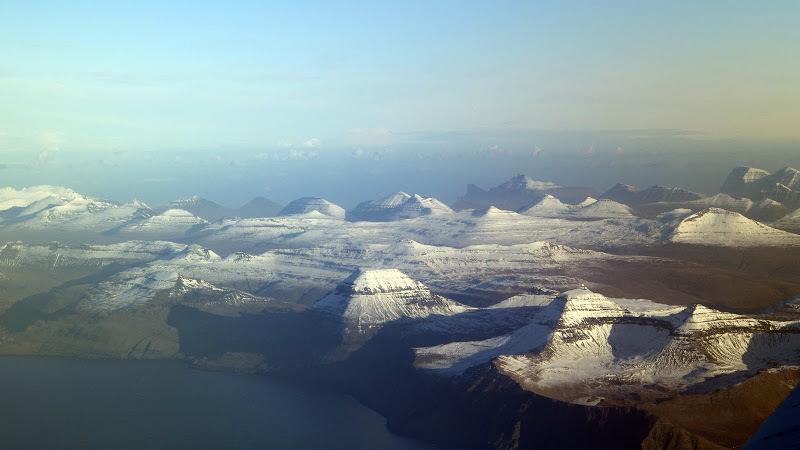 But Iceland itself was interesting. The airports were open but as a result of the strong winds, there was another Sigmet for severe mountain waves all the way up to FL400. Our track took us just North of this but we saw some interesting clouds and deviated to avoid the worst. There we some rollercoaster rides up and down with the IAS varying a lot but it was completely smooth. 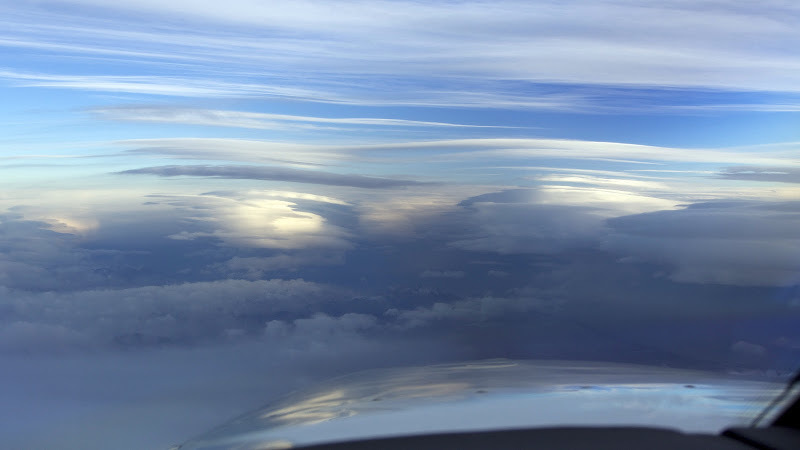 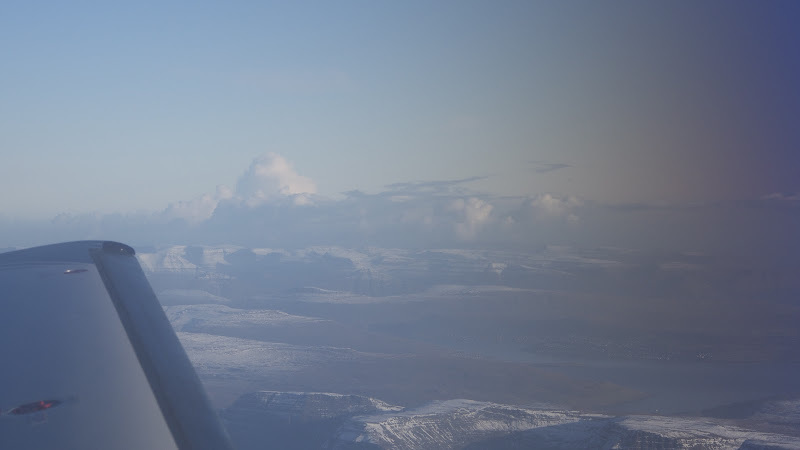 As predicted, we saw the ground 100 miles from Vagar and with 15 minutes to go started down for the approach. We landed at 1641 after 815nm in 4.5 hours. Lovely people at the airport refuelled us straight away in spite of the time and we went to the hotel and consumed a few glasses of wine.

The next morning we awoke on time and went out to the plane after seeing our flight called on the departures board to discover that the below freezing temperatures the night before had coated the aircraft (and the runway) in ice. It was plus 3 so we knew it would melt off as the sun rose but the wings were stubborn due to the very cold fuel. The air traffic controller told us how she melts the ice on her car and we proceeded to get a plastic bag of hot water and drag it over the wings. It worked perfectly but as the weather got even warmer we decided to just pout the hot water over the wings. It was faster and there was no risk of refreezing. This was obviously not something we would do in below zero temperatures where deicing fluid would be the only solution. 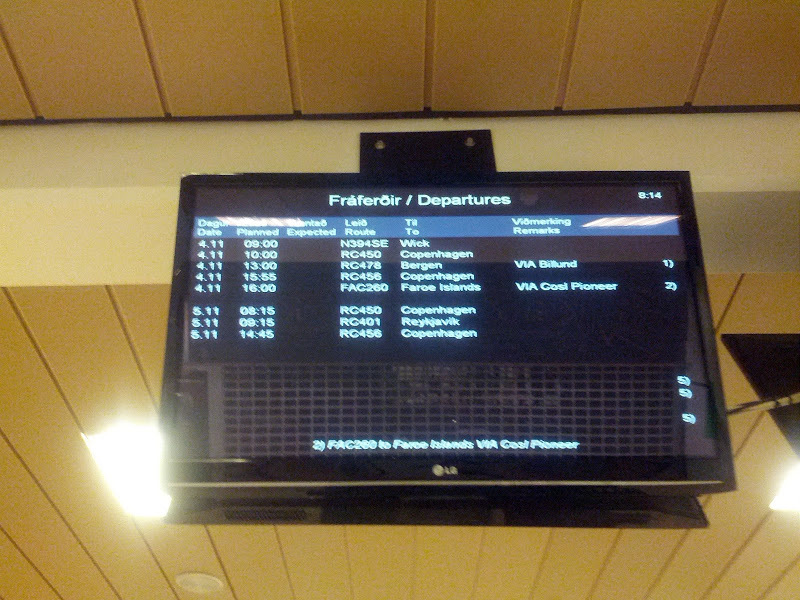 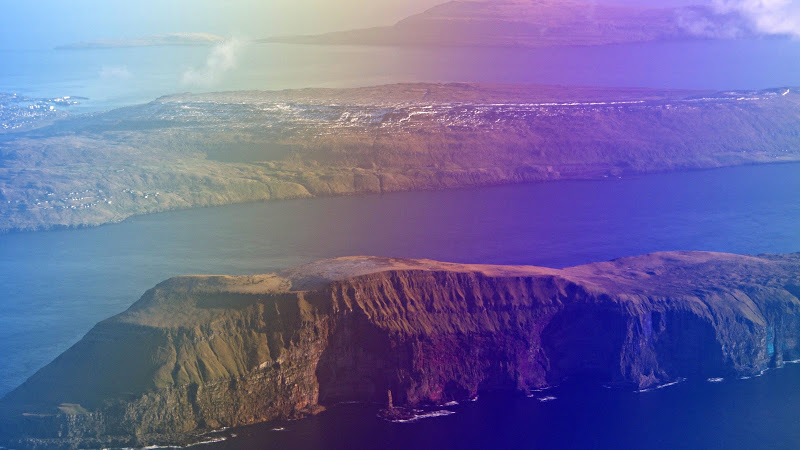 So we had lost about an hour but headed into hear a British accent for the first time in a week from the Scottish controller. Some weather along the route led to a bit of deviation but we landed at Wick, imported the aeroplane and met the famous and very helpful Andrew at Far North Aviation. 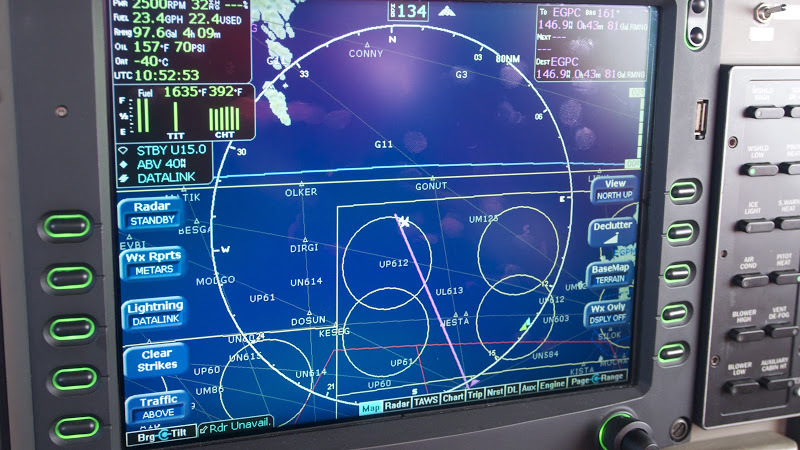 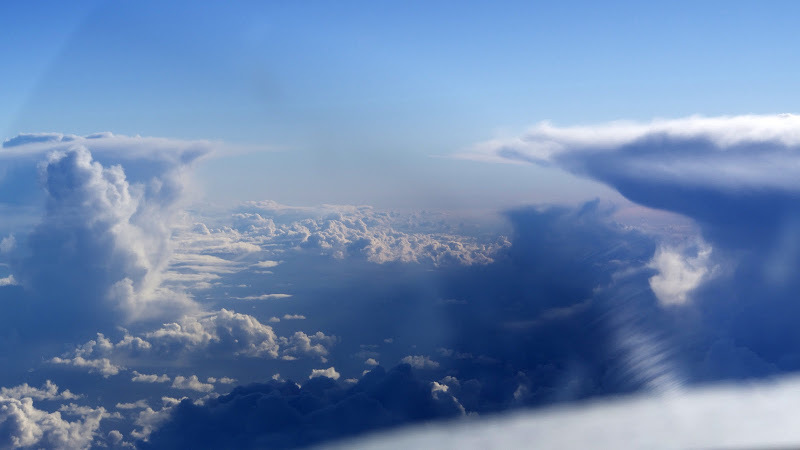 Another quick stop and we headed out towards Aberdeen before being given a selection of directs South over the country. I was nervous of being dropped out of CTA and so stayed at 250 until the last possible moment. The intensity of the ATC environment as we came further South was significant and far busier than anywhere else we had flown including the North East of the US. I am still unclear if this was because we were at 250 but it was great fun. They still dropped us with 40 miles to run to Oxford on the descent but immediately handed us to Oxford Approach from whom we requested the NDB/DME into 01. We broke out at 1000 feet with another aircraft in the hold and I proceeded to make my worst landing of the trip - fortunately my family in the terminal didn't notice. 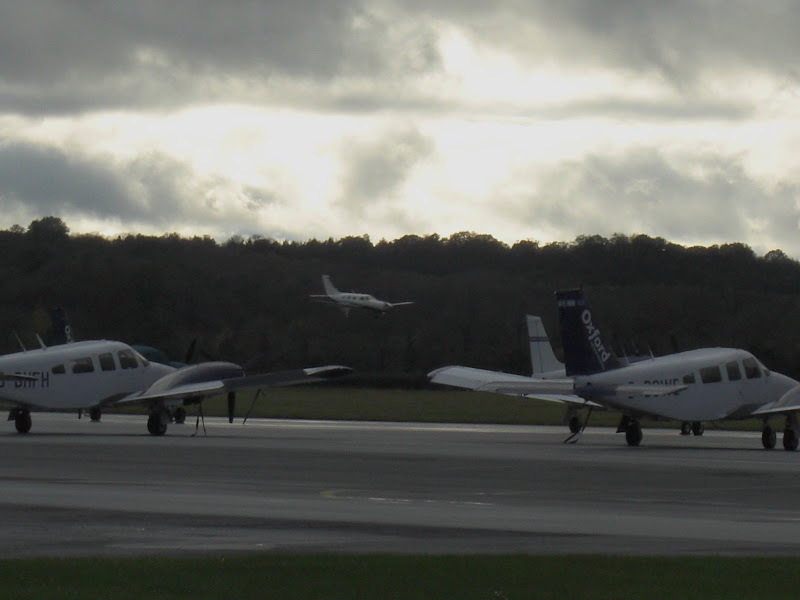 It was a great adventure and while tiring was actually pretty straightforward. There was a lot of inflight decision making required and we would not compromise on weather. Even on our longest leg, we had fuel to get to the UK or back to Iceland if things went wrong when we arrived in Faroe. And given all we had to do, it was actually quite busy most of the time. Now I am looking forward to enjoying the plane here.

If only I had the money to do such things, enjoy such toys ;-)

Nice trip, I especially like the bit about your "flight being called" - could have got a sharper picture though :-D

Thanks for sharing it.

When it's done, if you like, we could put it up under Articles along with the ones already there.

Sure fine with you putting it up. Sorry about the quality of some of the photos. New camera and the photo of the departure board was done on a cameraphone as the camera was on the plane through security.

The photos are great.

On some of the hazy ones, there is a procedure in Photoshop (actually there are several but I do things in a simple way

) which removes much of the haze. It takes a couple of minutes. I'd be happy to do them for you if you email me the originals.

I think it's harder to get pics out of a pressurised aircraft. In 2010 I had a flight in a TBM850 and could not get much through the windows.

Thanks Peter, I just tried under Picasaweb and it seems to have helped. As you see the pressure on the acrylic windows makes them stretch and can introduce some coloured fringes to them.

Lovely photos Jason and a very inspiring trip :-). I bought into my N reg group after it was flown over, but even in the not so dizzy heights that a PA28 can reach,I would have absolutely loved to have done this journey. Maybe one day....

PS, the price of PhotoShop is extorntionate these days, and if you dont have it, and want something very powerful for sorting out photo issues, try Adobe Lightroom instead.

the price of PhotoShop is extorntionate these days

One can buy old versions of a lot of software. Photoshop 7 (2002 vintage) does all I need. The relevant bit (that I use) is under Image / Adjustments / Levels and I do each of the R,G,B separately. Unfortunately it is really hard to describe using just text...

There are also slick techniques for de-hazing an image which is increasingly hazy in the distance - which will usually be the case. I had a play with that once but it was too much messing around.

Just inspiring, thanks for sharing the detail

EuropaBoy
EuropaBoy
EGBW
22 Posts
This thread is locked. This means you can't add a response.
Sign in to add your message