I’m trying to put together my week’s flying trip in mid July. It’s proving a lot more difficult than first thought with trying to get PPR’s and avgas. I’m struggling to get a response from Calvi. I’ve tried two different email address’s and have resorted to the fax with no answer from that. Does anyone have any contact details or could offer some suggestions.

Especially look at the parking surface condition, which was absolutely disgusting – video here

) are difficult to communicate with. Check the AIP (French AIP is generally accurate) and if there is nothing there, just file the FP and go. With an alternate, obviously. If you have to communicate, use French (google translate is OK).

If there is Customs PNR, don’t expect any reply to emails or faxes.

For avgas, just phone them. You will see from the above links that on the fly-in we got shafted over by a French fueller strike and everybody arriving had to refuel elsewhere. I had to refuel in Albenga (Italy) which was OK but it meant that despite departing UK about 8am we didn’t arrive till the evening.


we got shafted over by a French fueller strike

If I remember correctly it was a strike by the workers of the shipping company. The airport relies on AVGAS supplies coming by boat from the continent. First there was a strike, then there was some mechanical breakdown.

We are going there friday. The NOTAM about shortage of JET A1 end on july 7. They told me that will be okay…

Was in Figari LFKF on Saturday – AVGAS (we didn’t get any) 1.72€ parking & landing 32€ for a Piper Comanche for 1 night. – Taxi to Bonifacio where we spent the night 50€. Could be an alternative to Calvi if you’re looking for Fuel and an IFR arrival (RNAV or ILS 23) PPR via email works

I will give them a call before departure. If they don’t have Jet A1 will take what we need to go back to paris without refueling (one of the advantage of the DA42 with AUX tank)…

I recall that Calvi allowed DA42s to park on the tarmac, so you should be OK 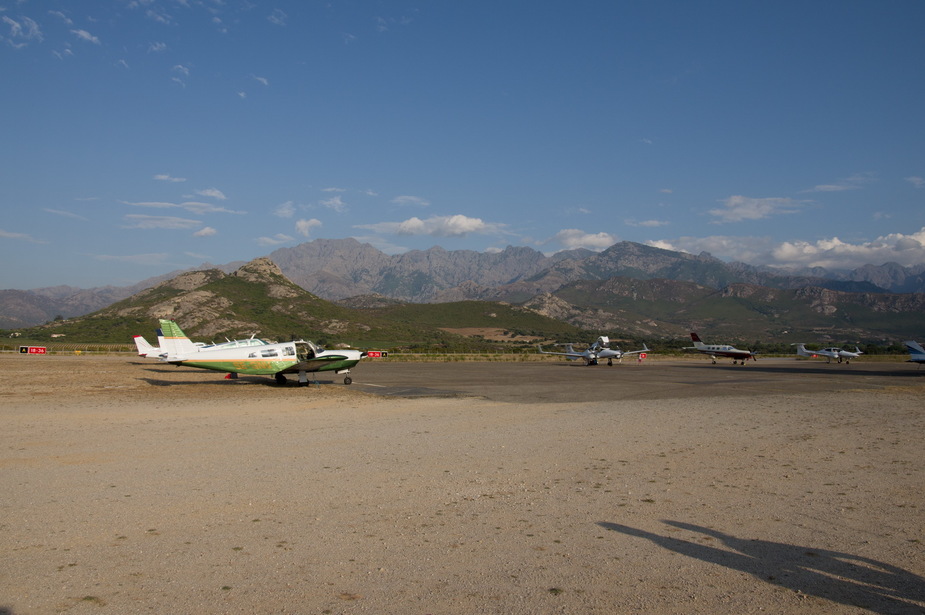 If I telephone them, do they speak English? My French is good enough to get by in hotels, restaurants etc, not sure if its good enough for a PPR on the telephone.
That parking surface does concern me though for FOD being dragged through the prop.

The issue isn’t really FOD. The surface is (well, was in Sep 2014) a very sharp sand which, when it ends up on your windows, will totally scratch the windows if anything touches them afterwards (e.g. a sun cover). We had to rinse the plane thoroughly (Dublinpilot made a dozen trips to a nearby building, with a water bottle) before putting the cover on it. And, upon return to the UK, there was a lot more cleaning to do. When the issue was raised with Calvi airport they basically said it’s not an issue for them so why should they fix it?

I guess if people like this don’t care, why should the airport care?

We offered to help him pull it off, onto the tarmac, but he wasn’t interested.

Calvi seems to allow twins and turboprops onto the tarmac.

Even if you can get help to push the plane off the tarmac onto it and vice versa, the plane will still be covered in the crap due to the propwash from others driving there under power. It gets everywhere.

Peter
Administrator
Shoreham EGKA, United Kingdom
46 Posts
This thread is locked. This means you can't add a response.
Sign in to add your message