Flying to Oshkosh and one week in the North 40

Actually it’s too late for this write-up, our trip took place in 2014. However, I never wrote about flying to Oshkosh and maybe somebody is interested in it, so here we go:

We were in the very lucky position to be able to take a sabbatical of half a year in 2014. We decided to go on an extended flying vacation in North America, mainly in the US. We left Mannheim April 1st and the only fixed date we had in our calendar was the EAA Airventure starting July 27th. We didn’t exactly take the most direct route.

Even though we had been flying across the US for quite a while by July, the arrival into Osh was a big thing to us. Each year for Airventure FAA issues what they call The NOTAM what is actually a booklet describing the special procedures to be used. And special they are indeed. IFR flights are discouraged and unless you fly a turbine powered aircraft, a warbird of have to fly very fast, you have to follow the Fisk arrival. First, you have to switch off the transponder, get the current ATIS and keep listening watch on the published frequency. Everybody approaches a point (actually a town) called RIPON, for unknown reasons pronounced “rippin”. In the vicinity of this point all pilots have to enter a holding if necessary, establish a self-separation of half a mile and follow a prescribed track 1000ft AGL and at 90kt IAS. If you can’t maintain at least half a mile separation from your predecessor, you have to return to RIPON and try again. 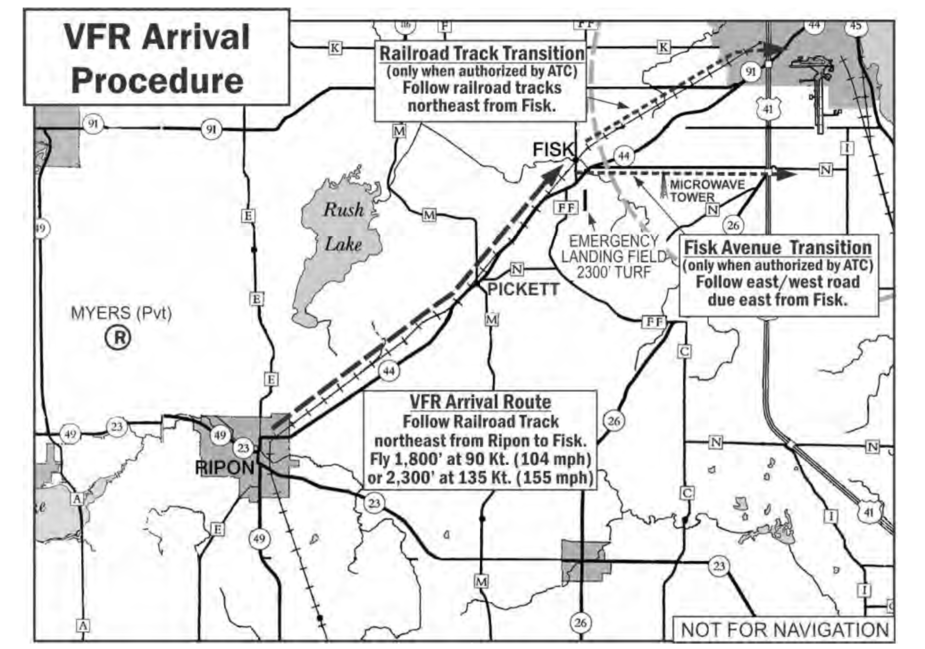 Then it’s “don’t call us…”. Between Picket and Fisk ATC calls you by your aircraft type and color. In our case “BROWN MOONEY, ROCK YOUR WINGS”. If you do it right you’ll hear for example “BROWN MOONEY, GOOD JOB, RWY27, FOLLOW THE RAILROAD TRACK” and a while later “BROWN MOONEY, MONITOR TOWER xxx.xx”. Again, tower will tell you what to do and you don’t read anything back. They even tell you where to land, there are colored dots on the RWY for that. 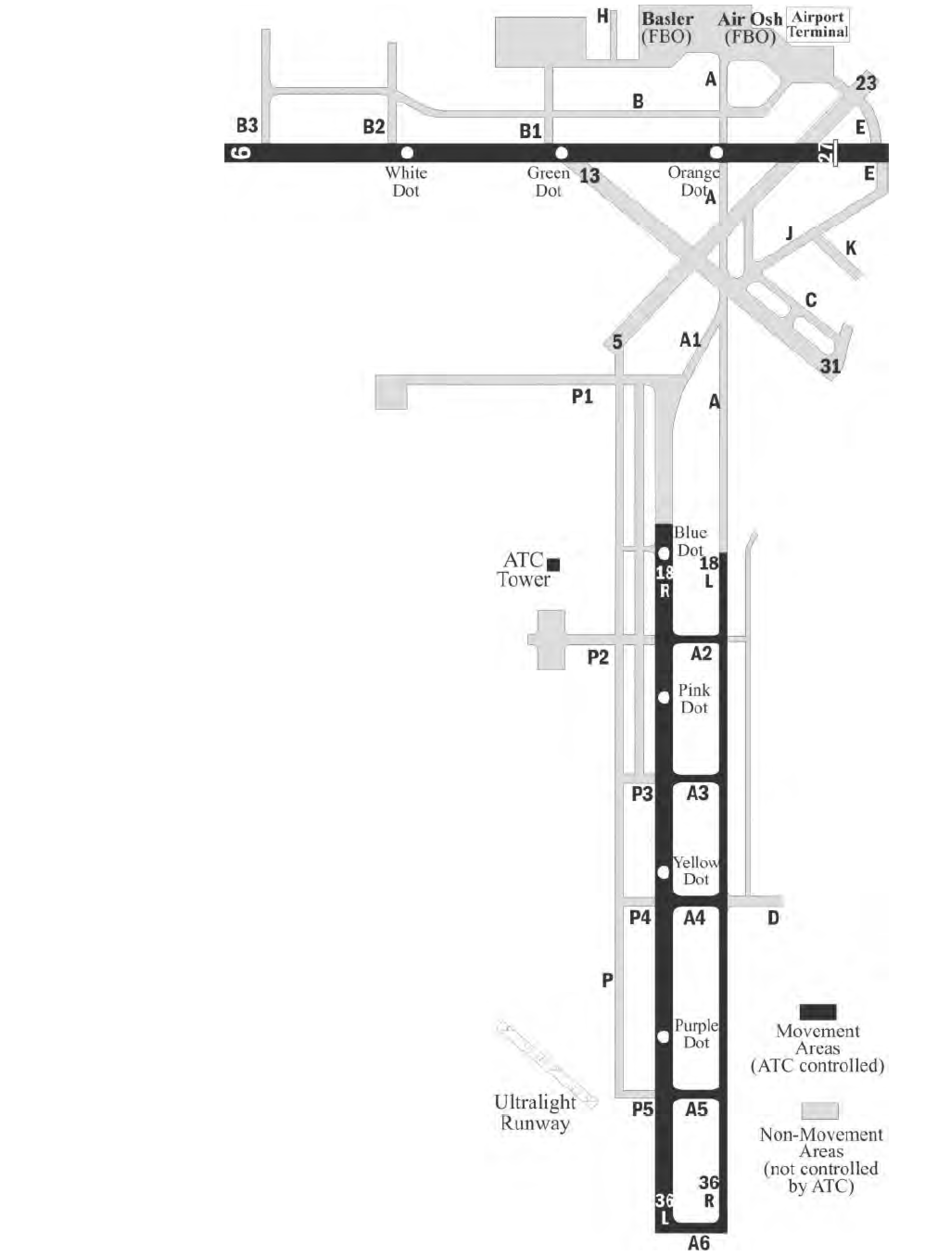 So you fly right downwind… I landed a bit short of the assigned orange dot and it was a rather positive landing but hey, we were in Oshkosh. And to my defense it can be said it was quite busy on the frequency. We had planned to arrive early on Sunday but we were not the only ones with that idea. IIRC a large chapter of the flying dentists (or whatever) was in the pattern. Apparently they were novices as well but hadn’t studied the NOTAM as long as we had. Half of them had to go around what made it a bit stressful for everybody.

More than the western half of 09/27 is surrounded by the GA camping area, known as North 40. You have to display a sheet of paper stating your intentions after landing and then you’ll be marshaled to the right location, in our case said North 40. Her we camped with thousands of others. The main Airventure action happens along 18/36 on the Western side. There you’ll find the trade show, the seminars and much more. Historic planes and home-builts are displayed towards the Southern end. And each afternoon the airshow attracts the crowds. I’m not that much into airshows back home, but I watched most of the days and I didn’t feel bored for a second. All kind of stuff is flying around. Even aerobatics with a Twin Beech can be seen. All kinds of formations. And night aerobatics is hard to find over here. A few miles to the South there is the sea plane base, where all the hustle and bustle of the main event seems far away. and Cubs on floats lazily bobbing up and down on the murky water. Some showers are guaranteed to pass through, so you need a good tent. Moreover, folding chairs are essential in the evenings as well as for watching the airshow. Food is expensive and of poor quality on the premises of Airventure. However, there is a supermarket reachable by shuttle bus (or on foot if you don’t mind a 40 minutes’ walk). There they are well accustomed to camping pilots and sell everything you may need. We learned that Americans apparently feel very uncomfortable when leaving house without a cooler full of ice. In order to do like the Romans we found a tiny version in that supermarket. Alcohol is banned in the North40 and of course we obeyed – not. So evenings get quite romantic. Mornings not so much as a P51 or something does a low pass each day at 6am sharp. At least they seem to make sure that the plane they use is short-stacked.

They built new bathrooms and showers recently. According to the rules they built as many male as female ones. Therefore I had to queue while Mrs. terbang was ready in no time at all.

Departure required quite some patience and wide open cowl flaps. Again you don’t have to use your PTT button, you’ll be marshaled by volunteers dressed in pink. We didn’t fly very far, just to an airfield with a motel nearby. There we could dry our stuff, take a shower and sleep in a proper bed. Many pilots fly to Oshkosh each year. That wouldn’t be for me even if I lived in the US. However, it certainly was a great experience that I wouldn’t want to miss.


We didn’t exactly take the most direct route.

Quite the understatement! :)
Nice write-up, I’d like to cross the Atlantic towards Oshkosh some day, but more direct.

Do many pilots from Europe fly to OSH? That’s a helluva trip – of the order of 50hrs airborne time, each way.

I’m usually camped on the N40 too and can confirm that the alcohol ban is not policed. In fact we usually get a few of the volunteer officials stopping round in the evening to join our soiree.

And to answer Peter, yes, there are usually a handful of European registrations to be seen from KR2 to turboprop.

The northern route birk-bgsf-cyfb would be about 3500NM from southern England and no more than 500nm between Avgas locations, so 50 hours should cover the round trip in a reasonable tourer.

Nice story, it must’ve been one heck of a summer

I was at Oshkosh in 2010 (seems like yesterday) and this guy was there from France, with his single seat helicopter.

A very attractive character, I spoke with him briefly, and he makes some interesting points about his relative safety in making the Atlantic crossing.

Great trip! You have bigger cojones than me! Do you have the Monroe long range tanks on the Mooney?

I think quite a few Europeans fly over each year. I once read about a Swiss guy who flew over several times in a rather small VFR-only plane (a Robin?). I tried to google him but couldn’t find anything.

We have Monroy tanks and our endurance is more than nine hours. Each of the three Atlantic legs took just over four hours, so that was not a problem.

There was a Robin flying European who flew to Oshkosh. IIRC he was a Lufthansa pilot who more often used a much larger plane to fly a similar route!

Silvaire
USA
17 Posts
This thread is locked. This means you can't add a response.
Sign in to add your message