Here’s some info about my recent trip to Maldives and Seychelles. I hope that someone finds it interesting or useful.

It started with the idea „I want to fly to Maldives”. Next, I tried drawing some routes using Google Earth. End result was 10,600 miles in 9 legs. 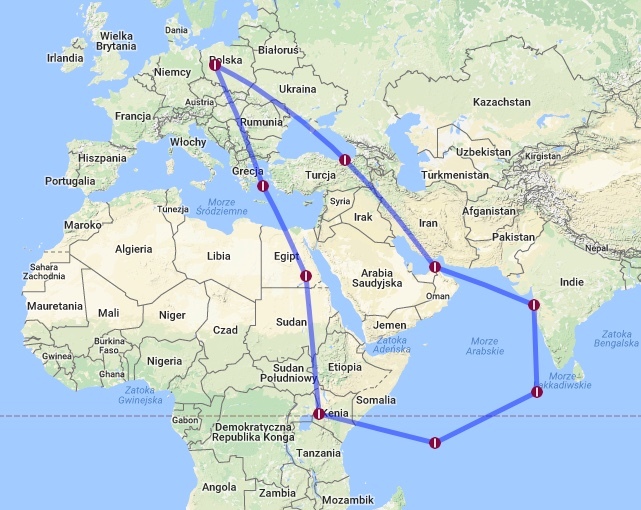 In long range cruise the TBM has 7 hours endurance at 250 knots, so I could fly each leg in 4-5 hours with 2 hours of fuel reserve left. Landing with 1/3 of fuel is conservative, but that’s the way I wanted it for my first trip.

After deciding about the route, I confirmed it with my insurer. There were no landings planned in LSW 617G excluded countries. I would overfly some of them, but that’s OK. Even if one has to land there in emergency, insurance still applies.

I planned the trip for 11 days, flying one leg per day, and taking a day off in Maldives and a day off in Seychelles.

Next I had to get landing and overflight permits. For that I asked Mike from whiteroseaviation.co.uk
In one week from first contact all permits were granted.

I also asked a friend working in local briefing office to support me with flight plans, handler communication, etc.

Then I had to gather some extra equipment:
- a life raft (with some food, desalination device, etc.)
- a ditch bag containing PLB, handheld VHF radio, Iridium Go! and a Powerbank

Poznań EPPO to Trabzon LTCG
First leg was over Ukraine, Romania and then along southern coast of Black Sea. It was VMC en-route with some rain on approach and more weather a few km farther, over land. Handlers at the airport were Gozen Air Services. In 40 minutes from touchdown my aircraft was refuelled and I was sitting in a taxi. Good start! 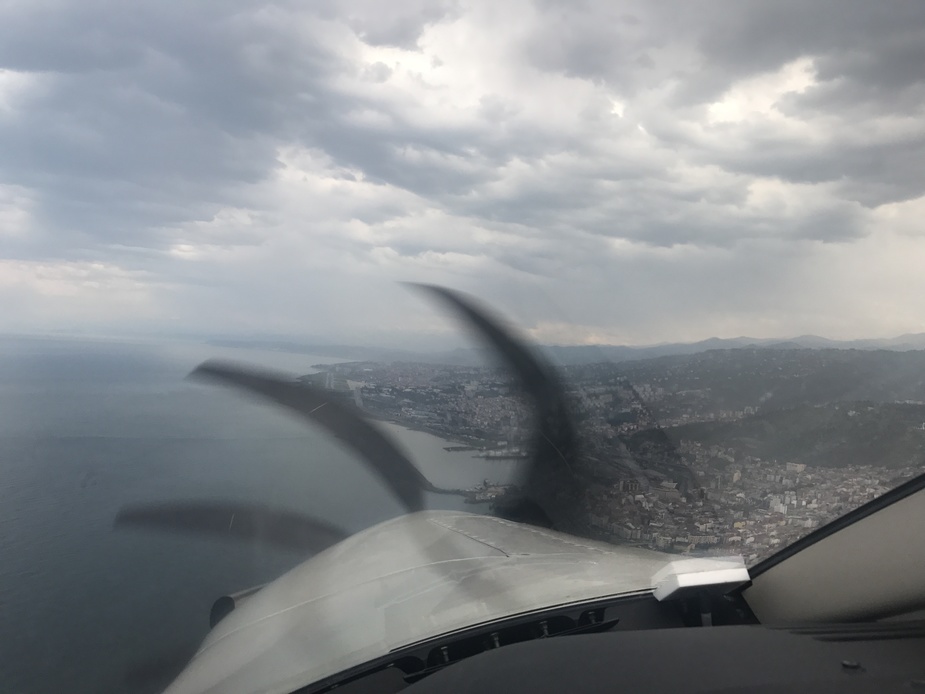 It was my first time in Turkey and first time I tasted a real Kebap. Very good. 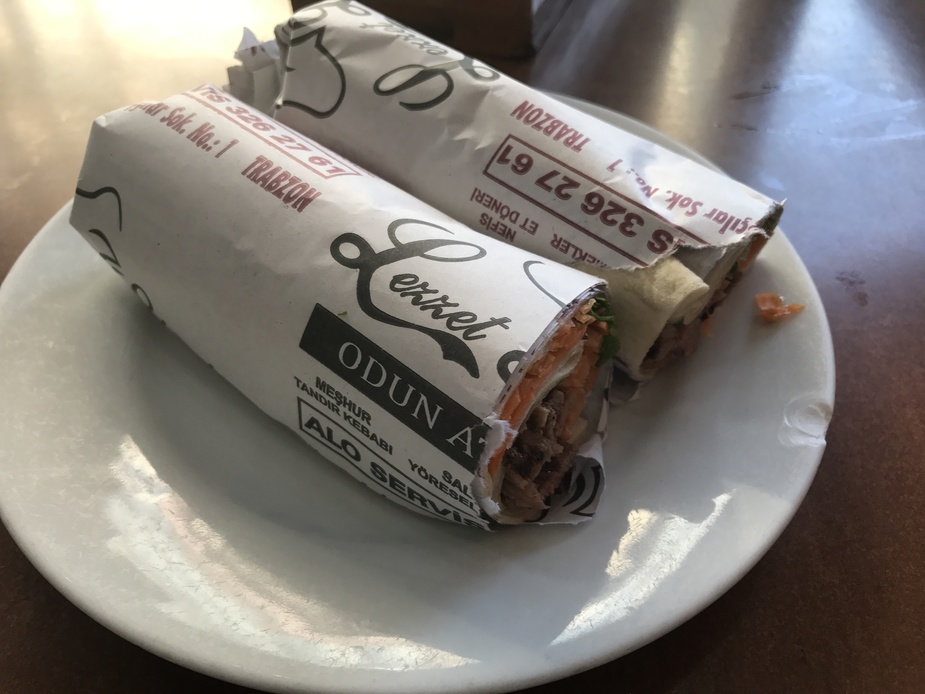 Trabzon LTCG to Sharjah OMSJ
Next day the weather In Trabzon improved and things looked good for the whole route. It was over Iran and the Persian Gulf to UAE. 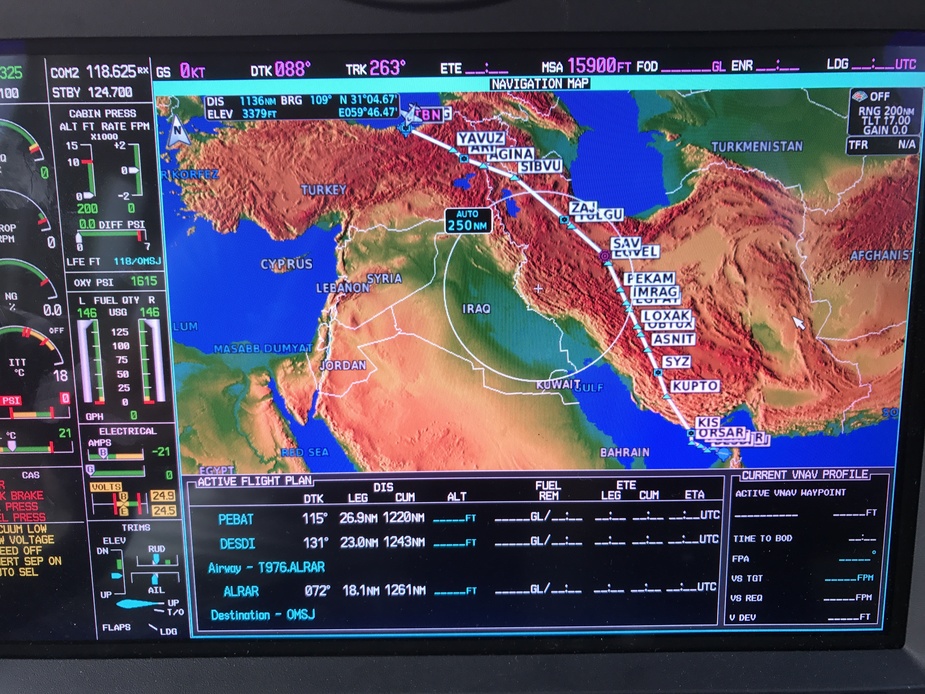 Taking off from Trabzon. 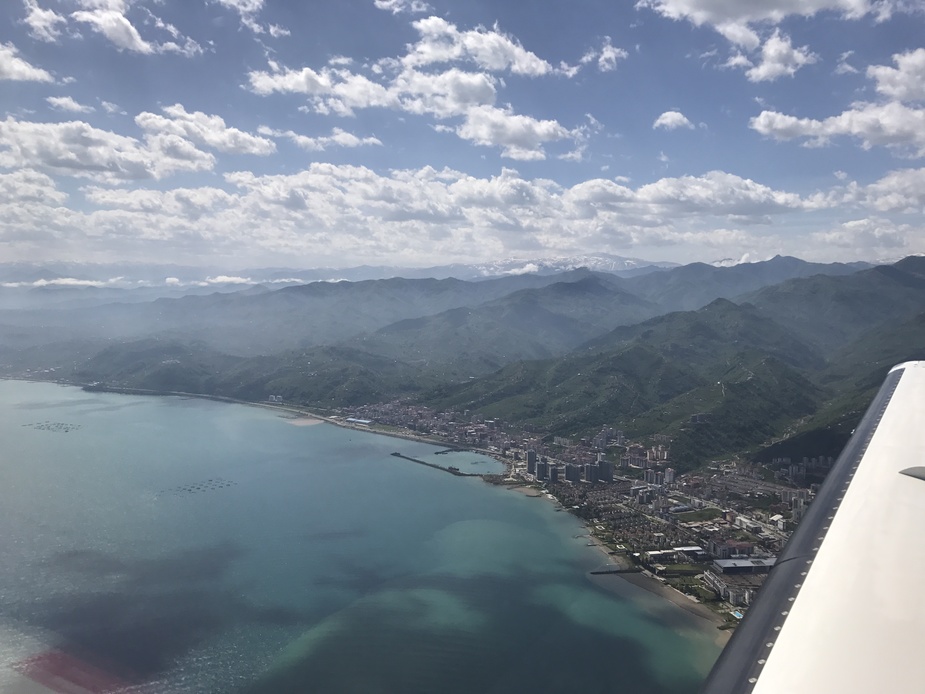 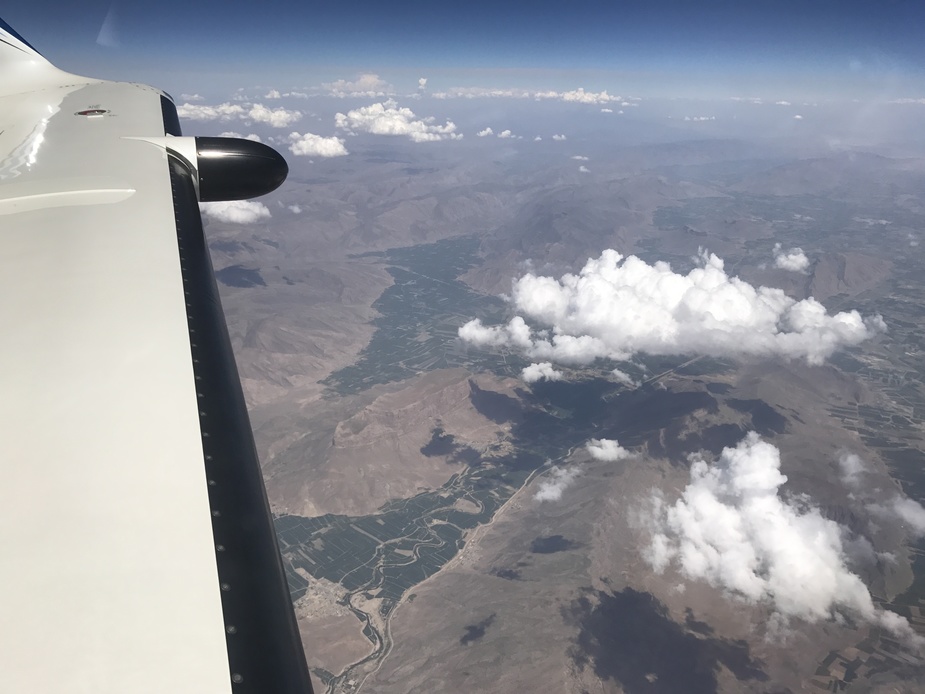 Better take off that sweater for landing. 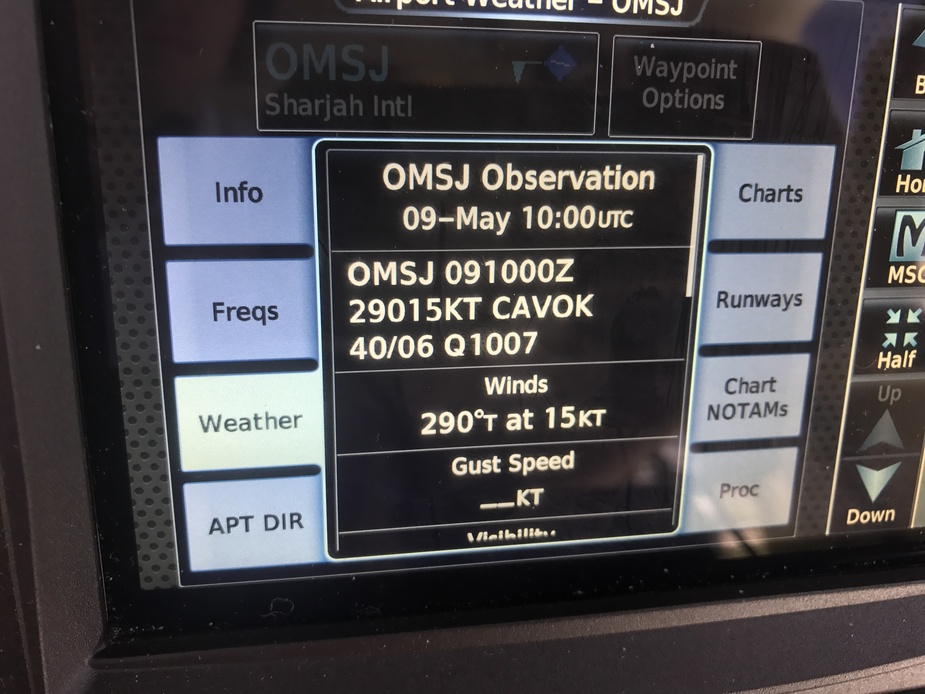 ATC in UAE was not at all exotic and approach went smoothly. Controllers speaking very good english complimented the TBM. There was a lot of traffic flying from/to Dubai, but everything was under control. 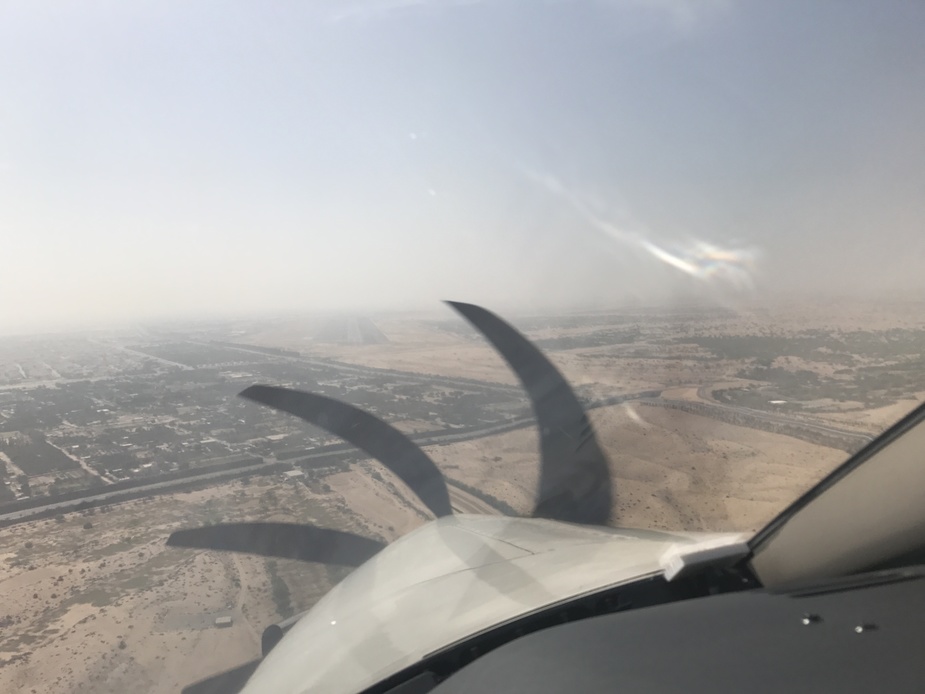 Handler in Sharjah was Gama Aviation Services. Unfortunately they refused to refuel on arrival, saying that I’ll have to wait for an hour or more. Next day I had to wait 1,5 hours to get fuel, reportedly due to one of the royal families departing in their BBJ.

Taking off from Sharjah, visible traffic pattern near Dubai. 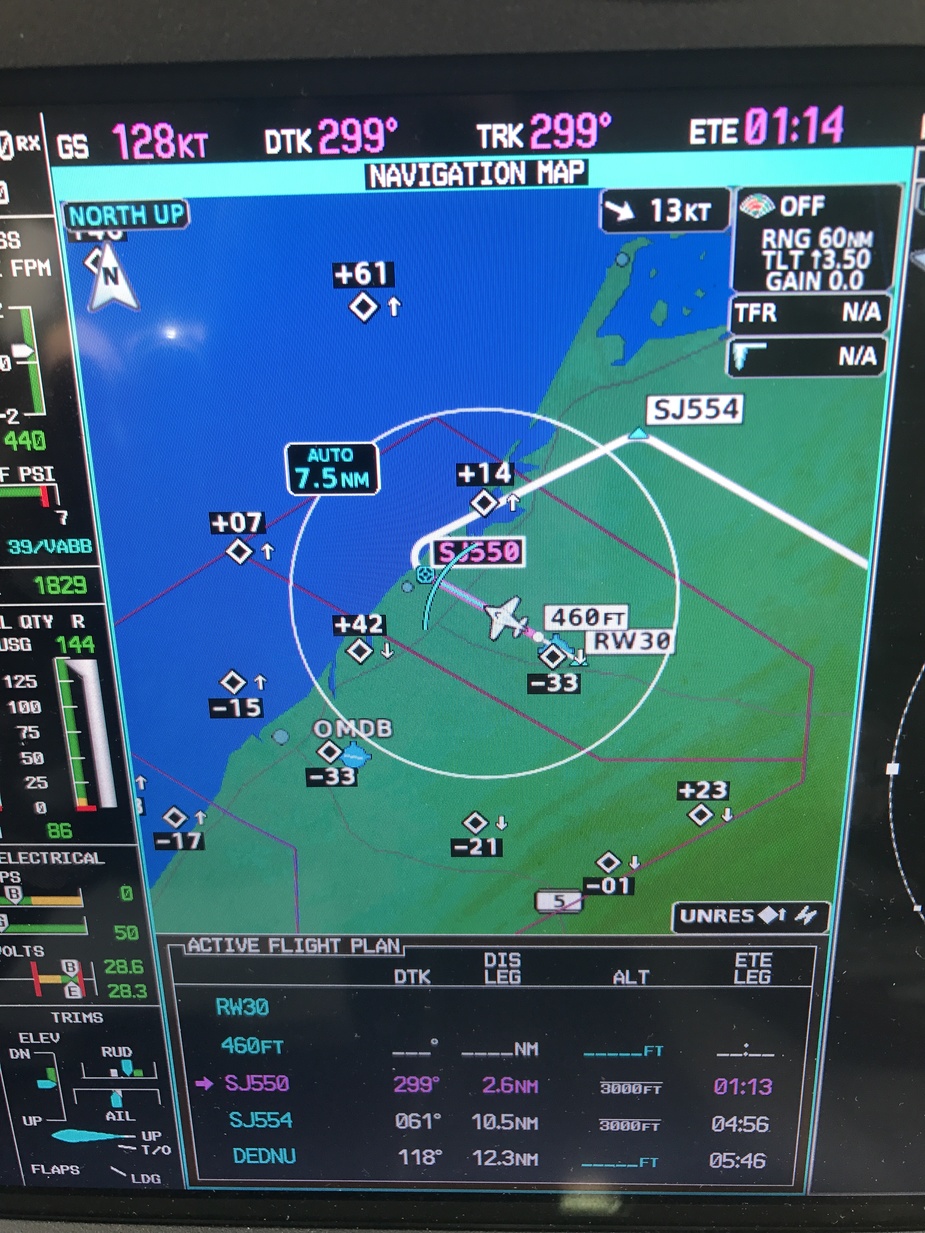 After taking off from Sharjah, I was handed over to Muscat. Soon I was flying over water and had the first opportunity to use the onboard HF radio. I was quite anxious about it, because I had no prior experience establishing communication and reporting position. Well, it is not difficult and goes like this:

Selcal is a four letter aircraft code that ATC beeps over radio, when they want to call a crew. Thanks to that the crew can turn the radio down a bit, and when ATC wants to speak to them, Selcal will flash.

The other thing is that everyone over the ocean uses CPDLC. It is a digital link over Inmarsat (I believe). It’s not available on my aircraft, so I had to use HF.

Sometimes I was not able to talk to Mumbai on HF and used the onboard sat phone to call controllers and pass a position report. Phone number is given in JeppFD FIR info.

The area around Mumbai airport is generally flat, but there is a mountain ridge sticking out in one place. I was surprised at how close to the ridge I was vectored when approaching for ILS27. Accident waiting to happen, but who am I to judge. 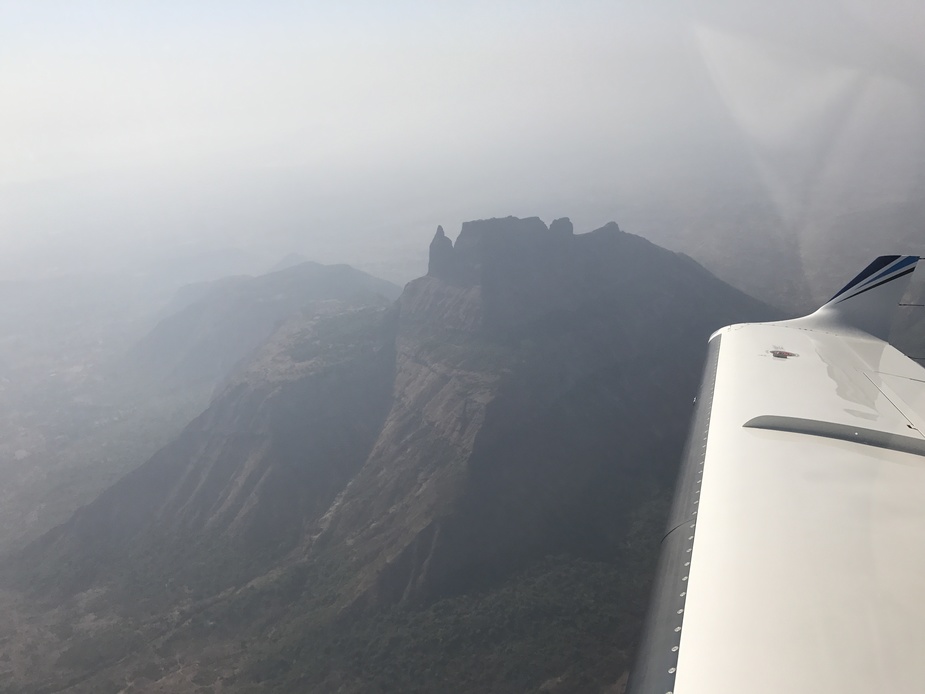 My handler in Mumbai was Aerotech FMS, who would not accept Visa or Mastercard. Luckily I thought of that and took some dollars with me. Visibility was “4000 FU” (smoke).

I was asked to come to Mumbai airport 2,5 hours prior to departure and it was good advice. The papers, stamps and desks seemed to never end. You have to have a sense of humour to fly to India.

Finally, I was in the air again and some weather awaited. 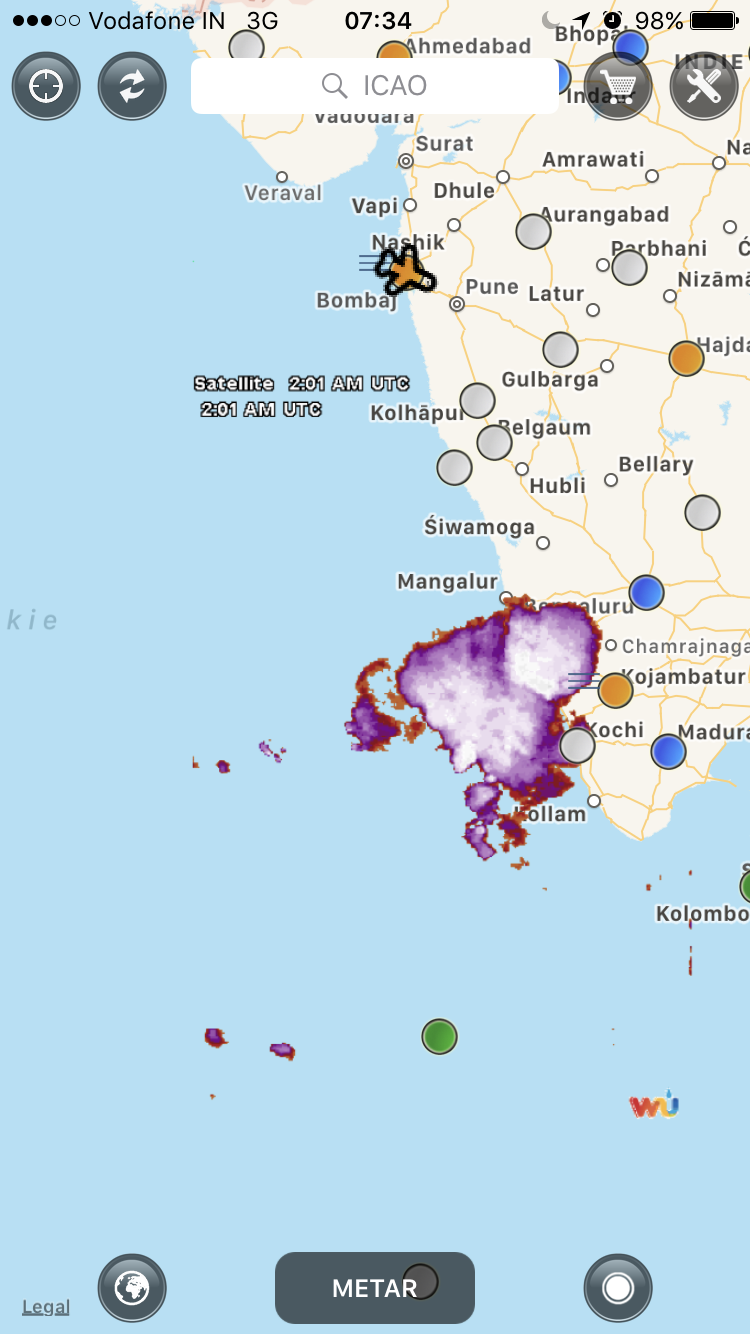 While the Connext onboard satellite weather doesn’t provide precipitation info outside of Western Europe, AeroPlus iPad application together with IridiumGo! can give you pictures like the one above. I found it very useful during the whole trip.

From abeam Goa until close to Maldives it was IMC and I had to do some weather avoidance. I was also concerned about icing, as temperature was -26 at FL290 as opposed to -45 or so that I was used to in Europe. In the end I didn’t see any ice. 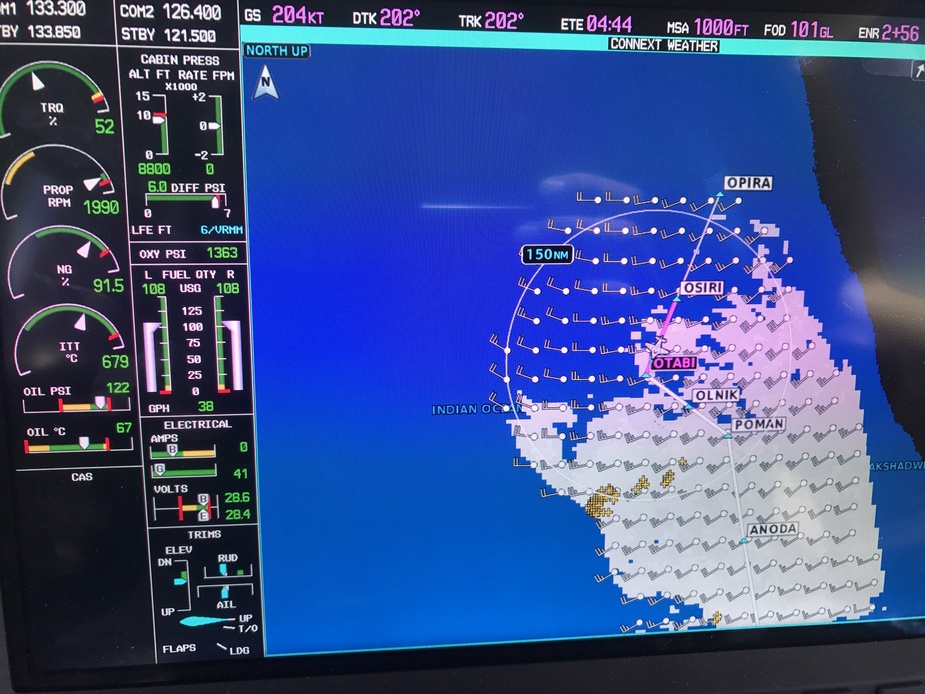 Relieved to see the little islands. 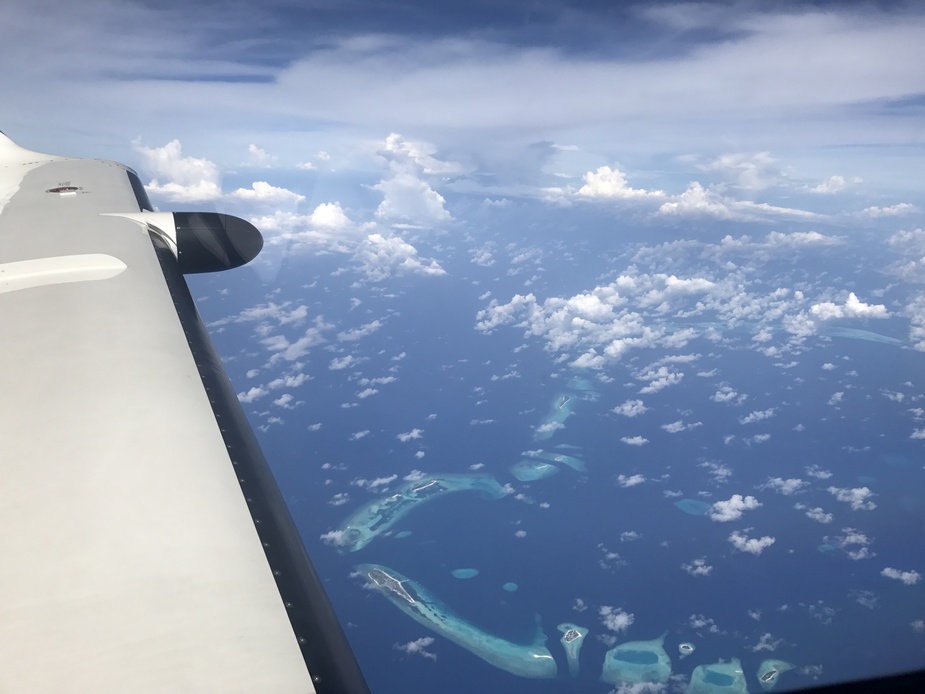 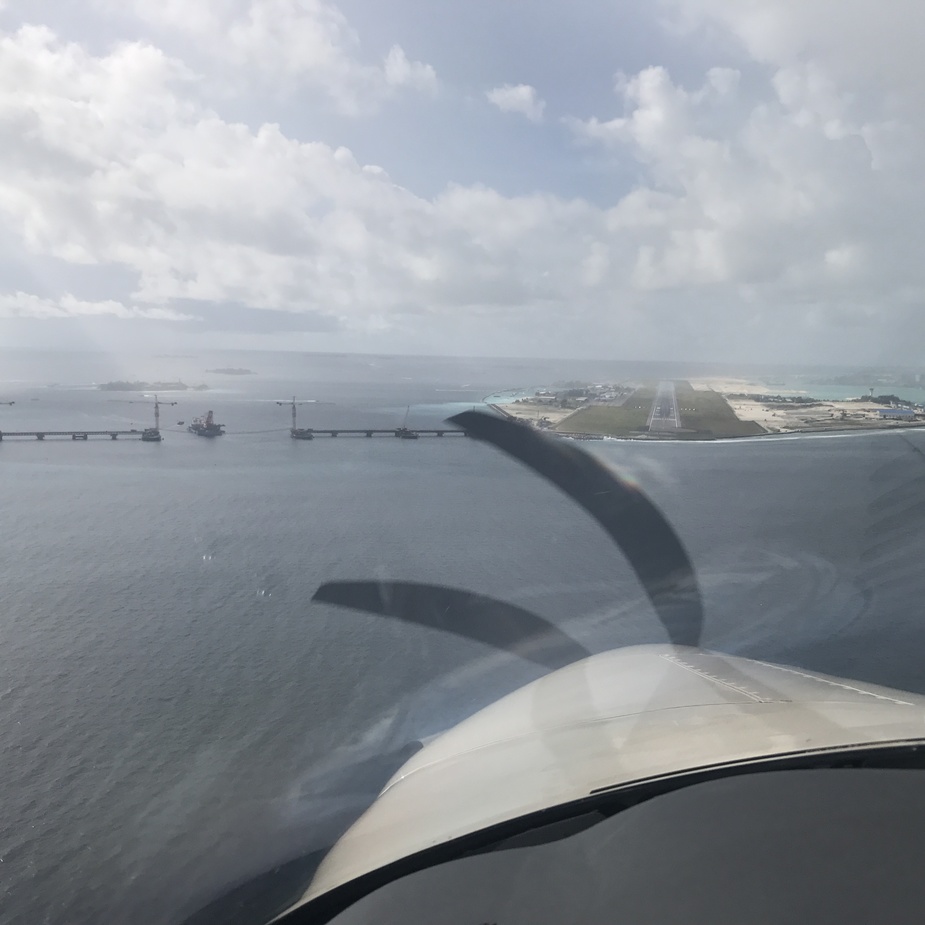 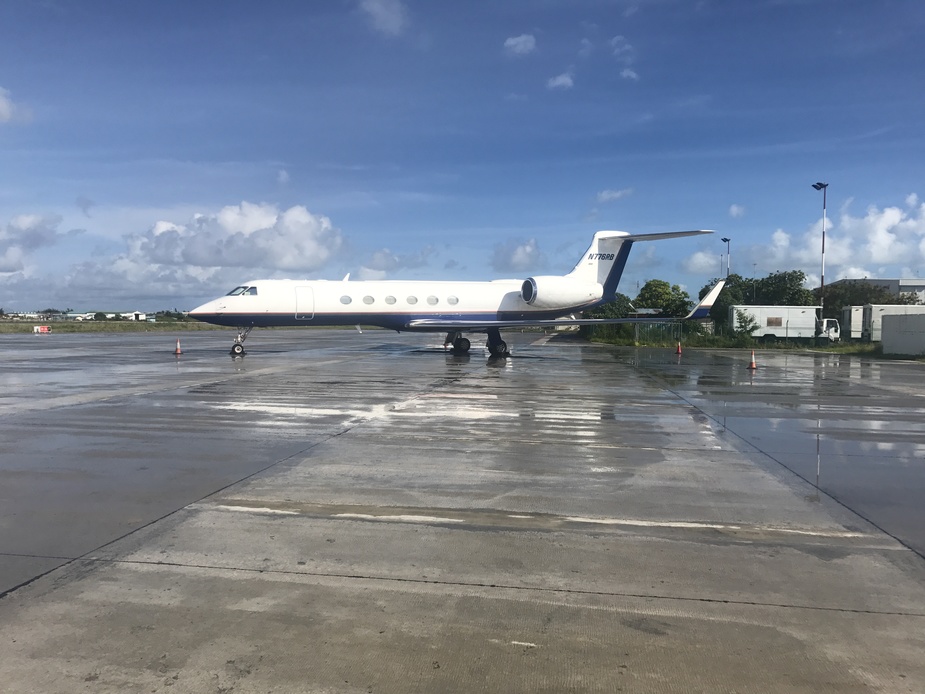 Handling in Male was done by Inner Maldives. It was the most friendly and relaxed place during the whole trip. Also got a chance to visit airport cantina, where my agent Ibrahim bought me a snack and a drink.

This was the most difficult flight for me, because it was entirely over water. There are usually CBs here and they reach FL480. I had the TBM since September and winter is calm in Europe, so I had little opportunity to use the weather radar.

On the first day, weather looked like below (departure top right, destination bottom left) and I decided not to go, because CBs were in second part of the flight. This meant that I could not go back if I had any trouble avoiding. Also, Maldives is not a bad place to be trapped at. 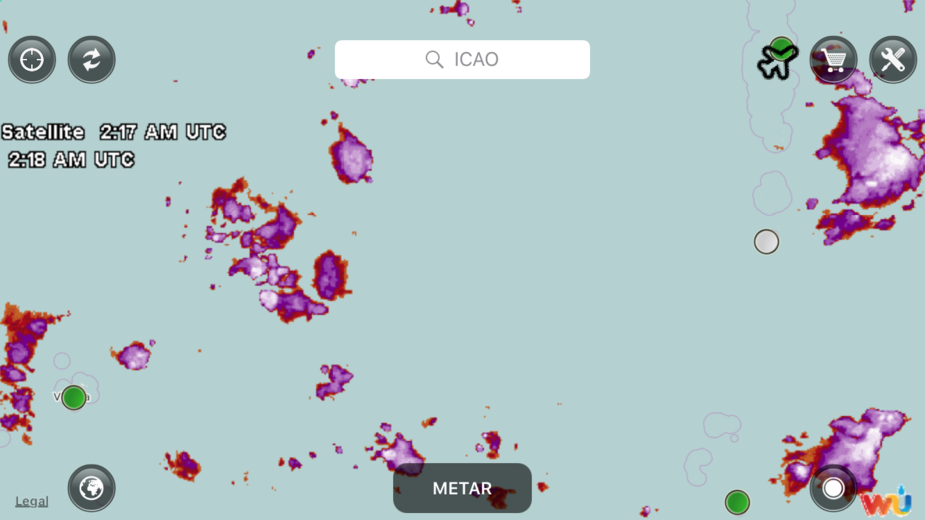 Next day it was like below and I decided to go. If I didn’t like the weather, I could go back. Of course I didn’t have to go back. Steered 50 miles left of track to avoid the built up area. 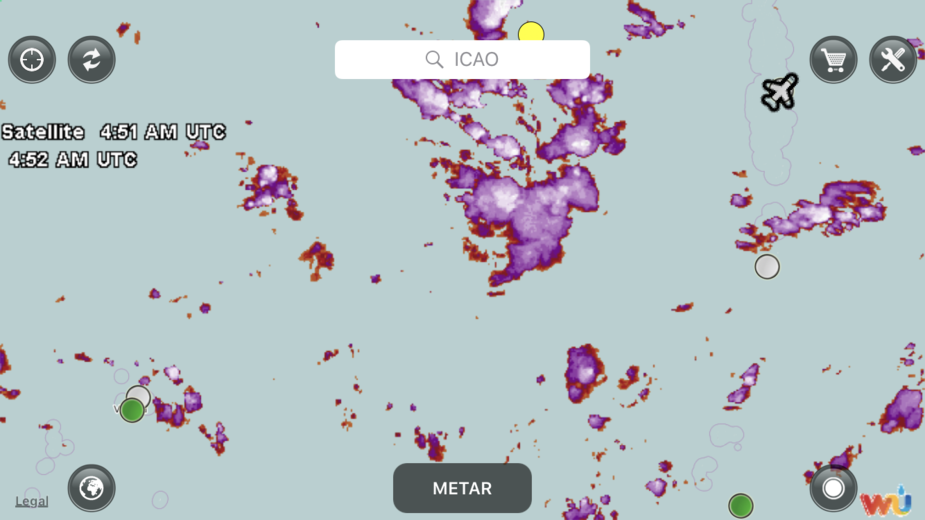 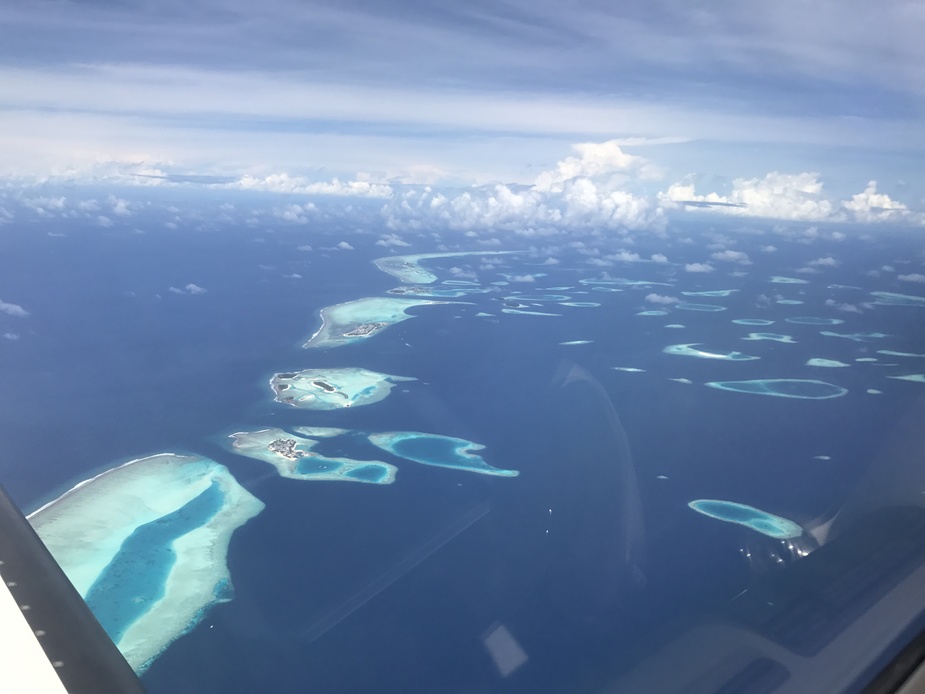 There was some weather on approach to Seychelles, but I was able to get around and rejoin the arrival. Also, lots of position reporting during approach to FSIA, because they don’t have radar. 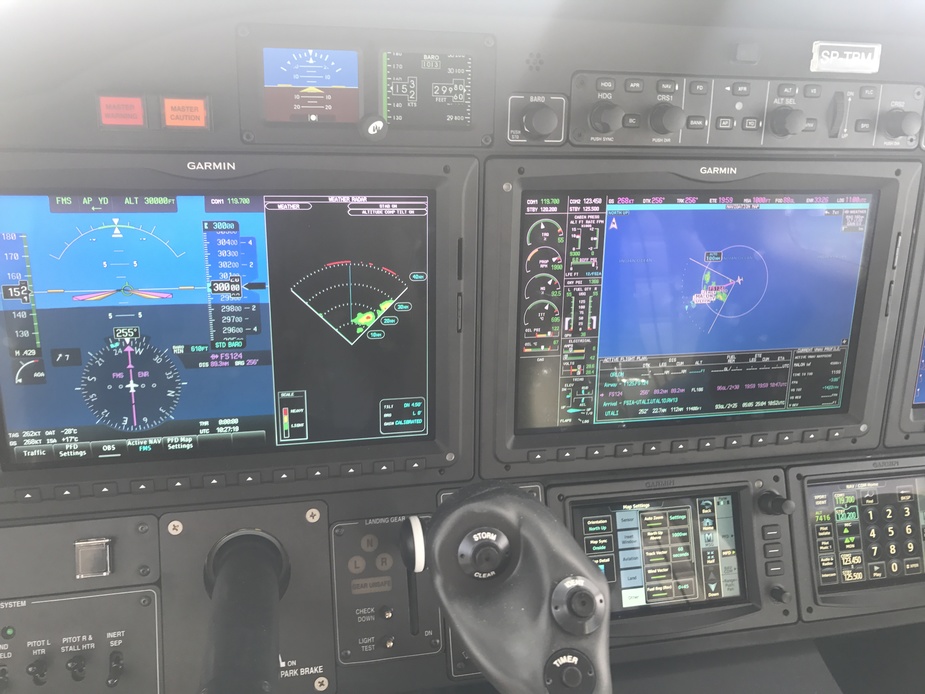 In Mahe I was welcomed by a person asking me to spray the cabin with insecticide and remain inside for a few minutes. How nice!

Another thing to remember is that one has to have a tow bar in FSIA. That is because after arrival you taxi to the private terminal, where passengers disembark. Then they tow the aircraft to parking position. On departure they tow it again to the terminal, where it is refuelled, passengers embark and one can fly. No passengers? Doesn’t matter. You have to follow the same procedure. 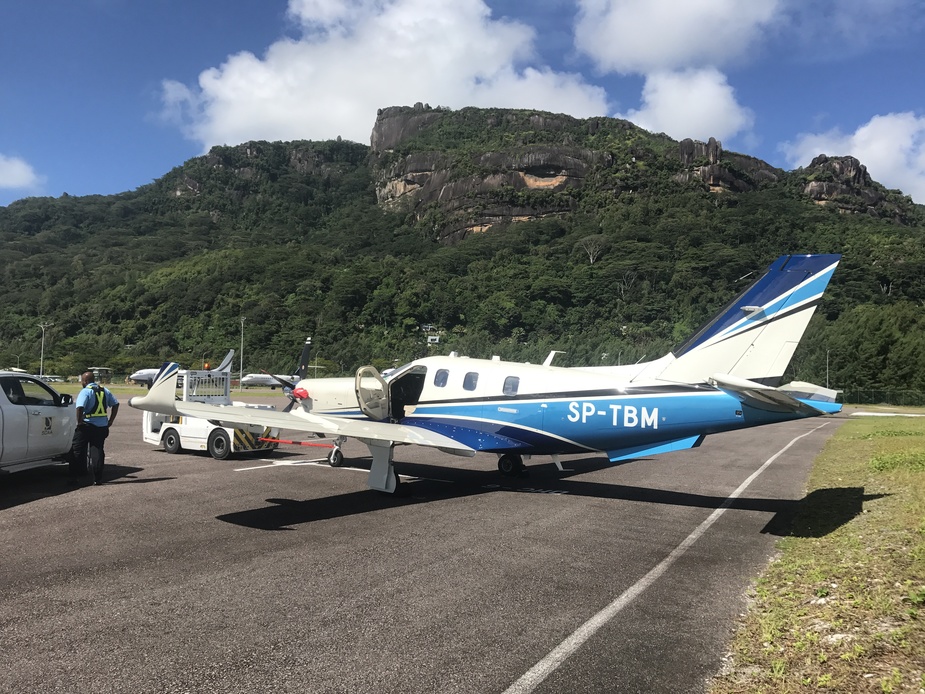 It’s not too bad there.. 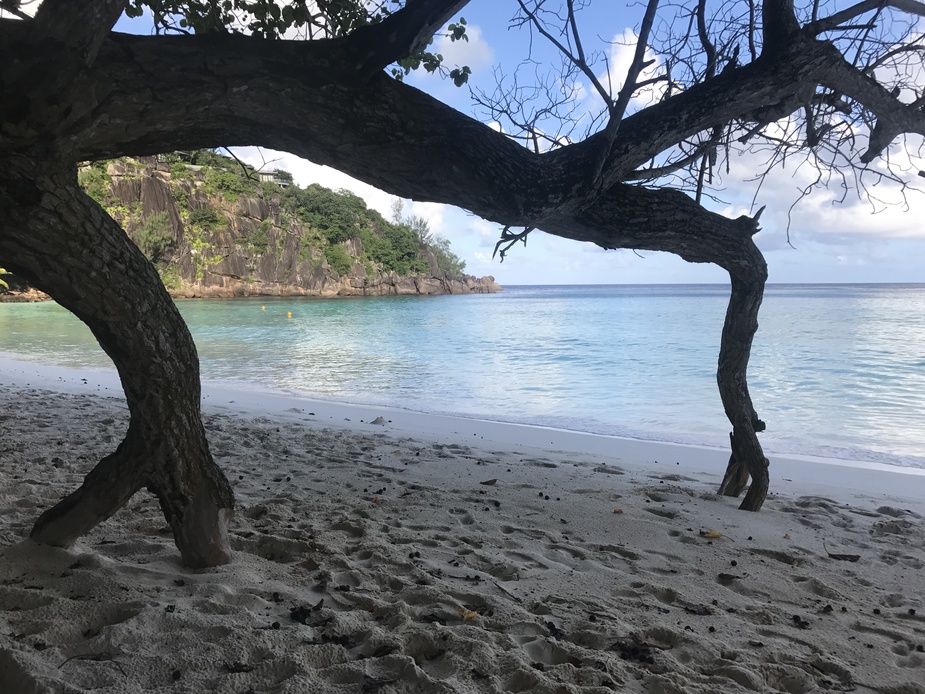 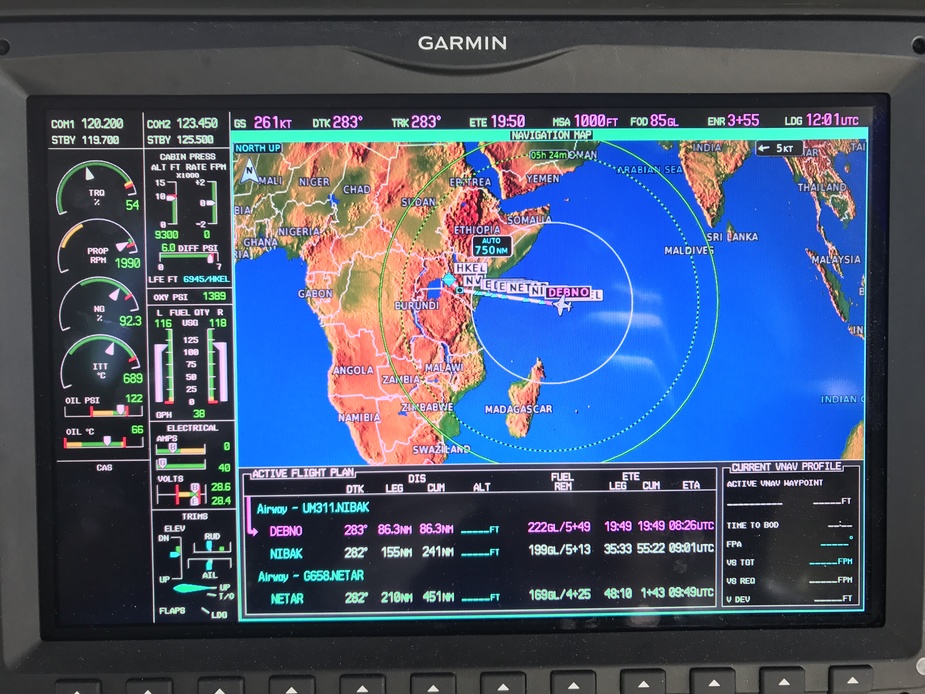 During climb from FSIA I received instruction to intercept and follow a VOR radial. It would be easier if they gave this info on ground, but they first clear you to an RNAV point and once you’ve started climbing, they give the radial. Had this also in Aswan and Cairo. Weather was good until coast of Africa, where I had to go around some TS. After that, there was not much in the way.

Few minutes before descent to Eldoret, at FL300, I saw a cumuli type cloud in front and switched on the inertial separator. When the separator comes on, TRQ goes down. To compensate, I pushed the throttle. ITT was not bad, around 700, but at that moment a red BLEED TEMP message popped on CAS. I grabbed the checklist, looking for that message. Checklist stated that I should expect BLEED OFF soon, which means loss of pressurisation. So I donned the oxygen mask and asked for descent in Vader style. Next, I followed steps on the checklist, which included switching bleed off and on. The message disappeared and didn’t return since. I’m guessing it had something to do with ISA+20 conditions.

In Eldoret I was asked to perform a visual approach. Made it just in time, as there was some weather nearing the airfield. 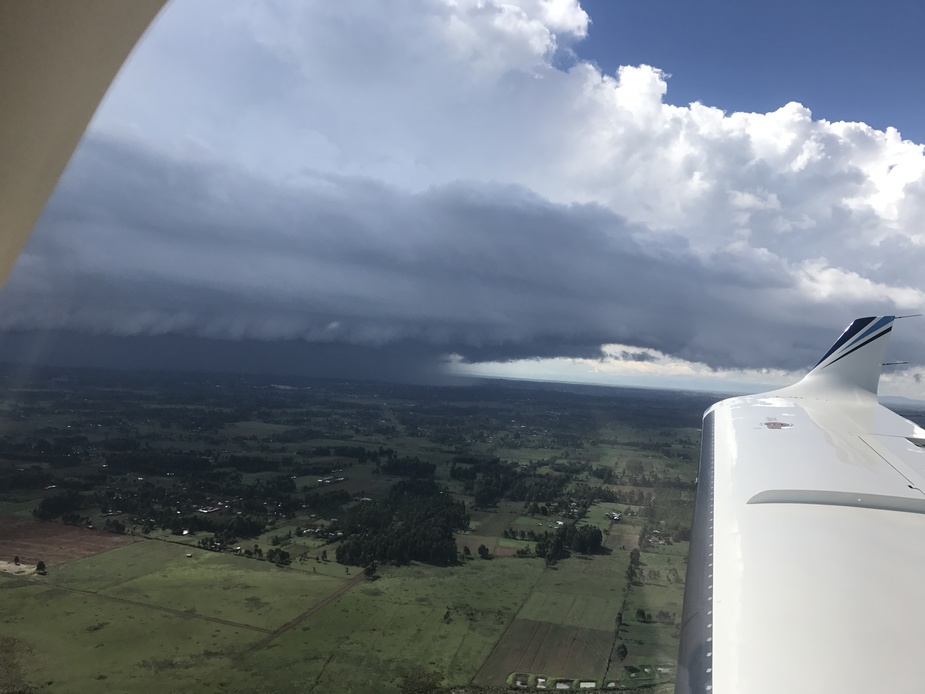 Risk of malaria didn’t help me sleep well in Eldoret. I was ready to leave. The airport has an elevation of 6945 feet and with ISA+20 conditions I had the longest ground run ever. Some 850m compared to 525m for ISA at sea.

This was also longest flight at 1466NM. Completed in 5h59m with 60 gallons remaining. 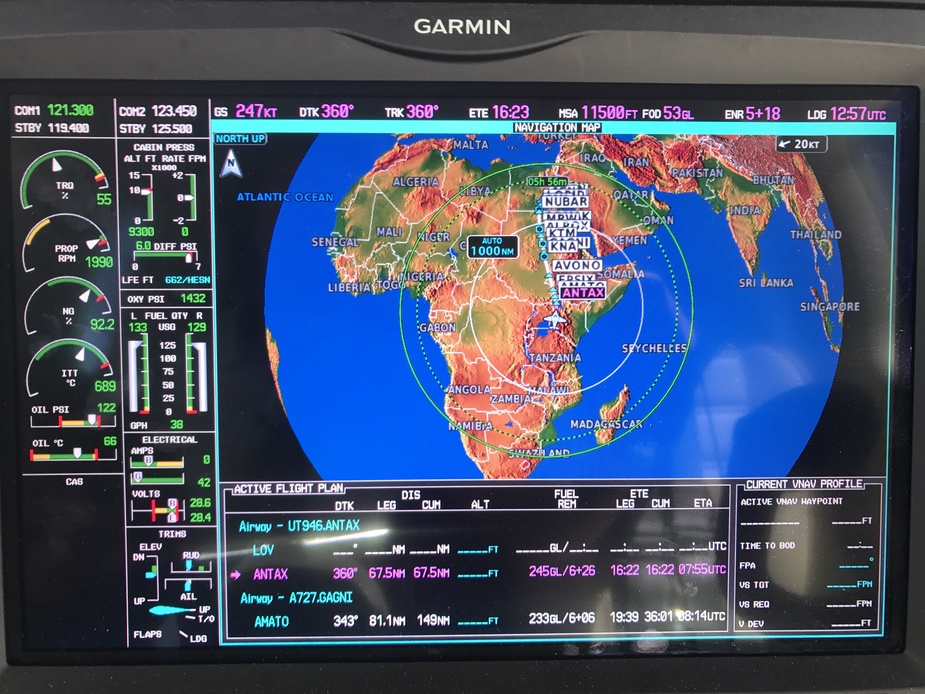 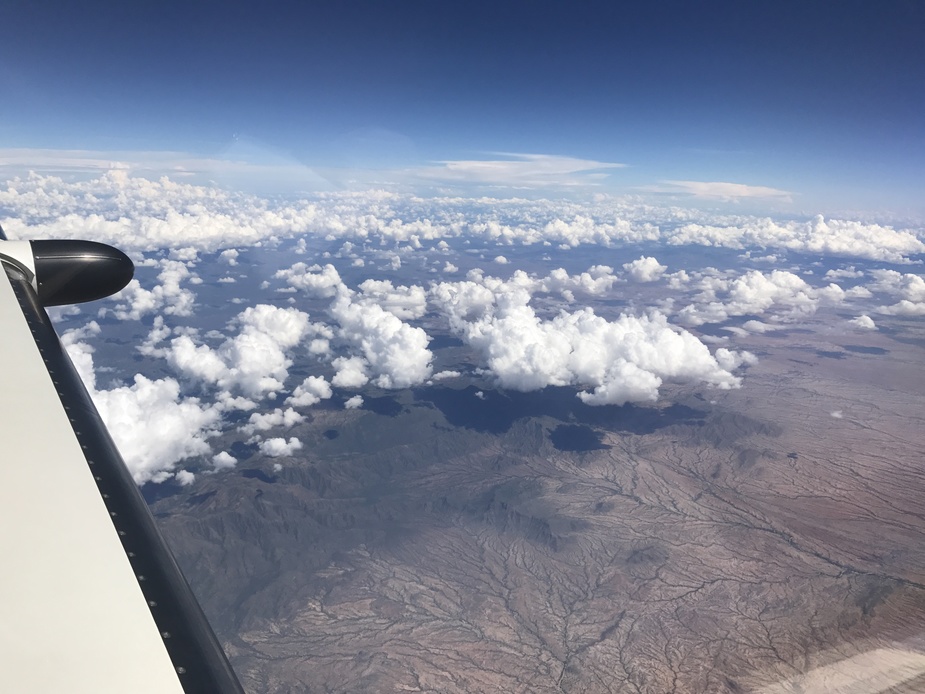 Aswan, where they have a big dam on the Nile. 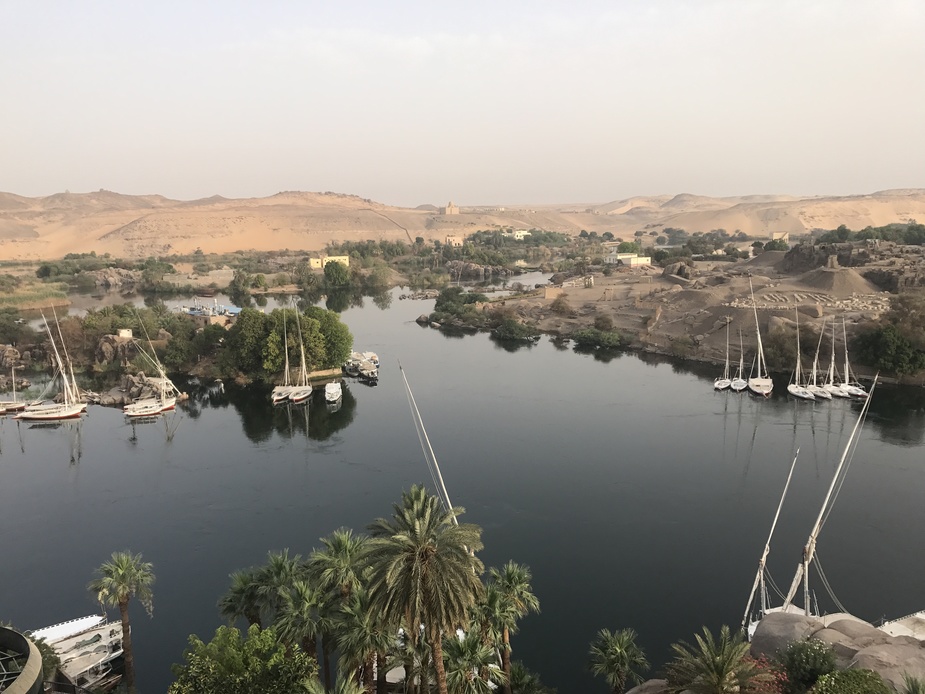 The last two legs were only 900 and 1000 NM long, so I flew them in one day using normal cruise. There were no unexpected events. 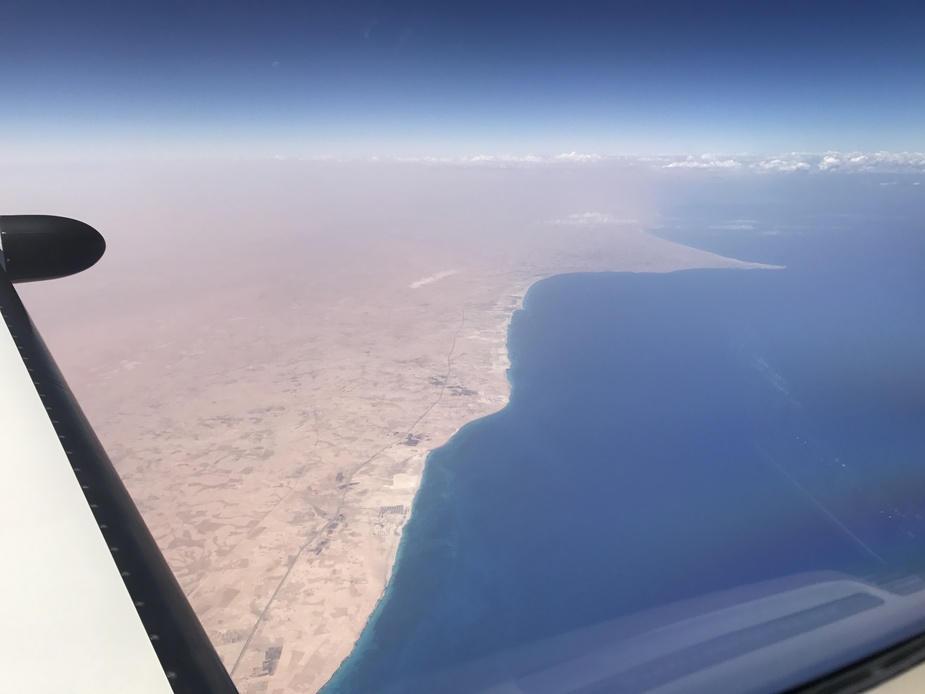 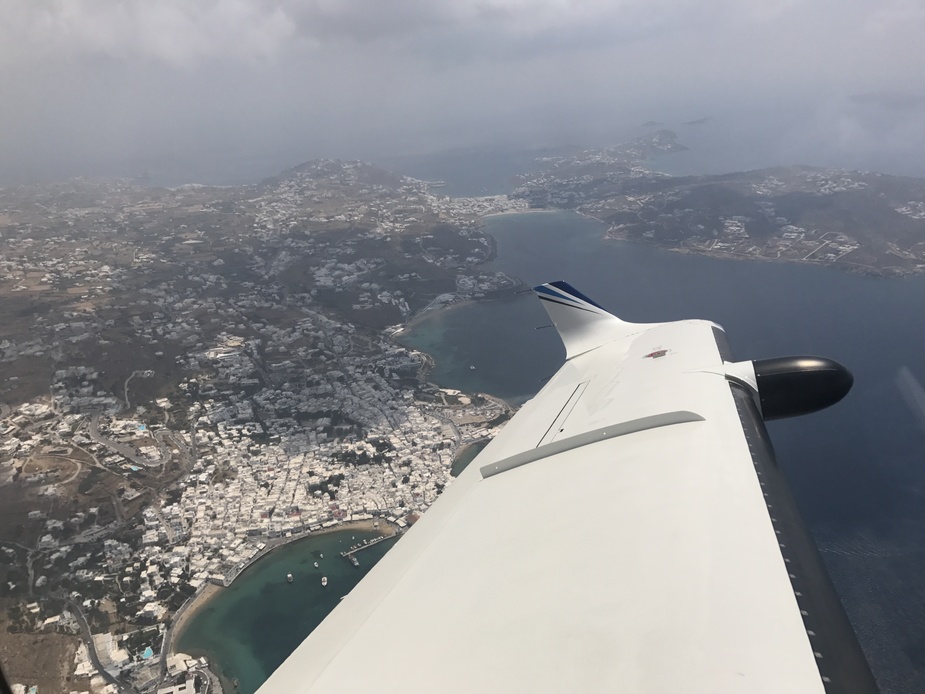 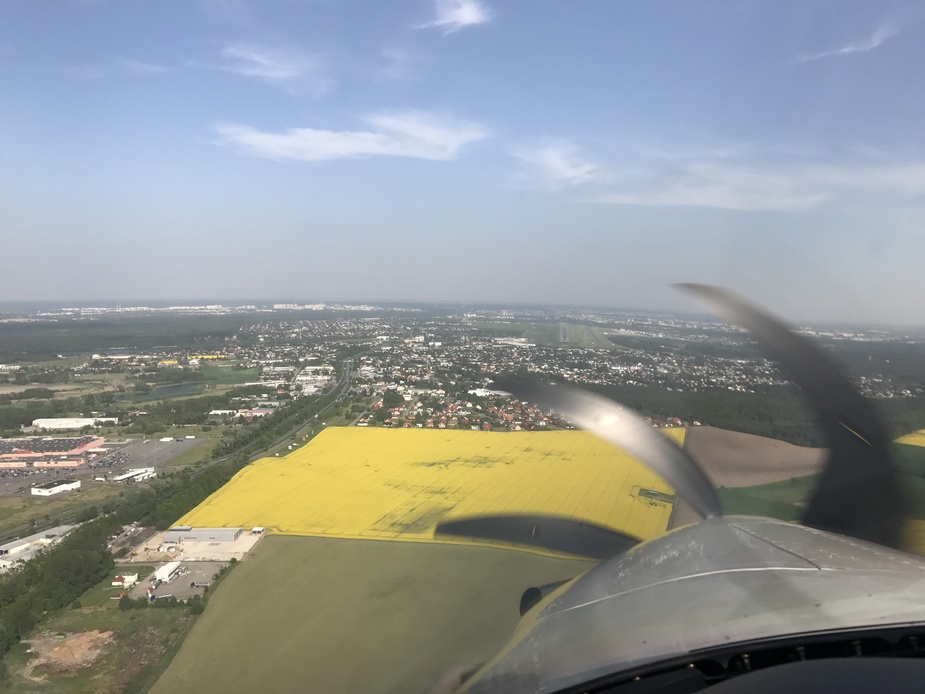 Thinking about the whole trip, it would have been wise to take someone experienced with me. Flying alone, I was concerned about the weather. Especially over ocean, where one can’t land at the nearest airfield. Had I misjudged the weather, I would be in serious trouble. But it ended well and I am now a little more confident than before the trip. 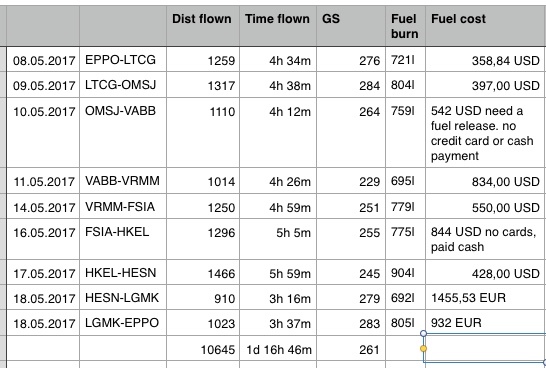 What a great trip! Makes one dreaming!
I am sure you liked it better than Bieber.

Spectacular Loco, thanks for posting!

A real trip! I would like to see more pictures and details.

WoW, amazing trip. How long do you have your IR already? Was it a big conversion tot this type of plane?

Great trip report! The TBM range is impressive and in these parts of the world, can allow you to bypass troublesome areas and countries. Great range is also the best speed modification there is.

An awesome trip; thank you very much Loco for posting the report. The TBM is such a great plane for these trips. But also on this trip you pushed the boundaries further than most owners.

Great range is also the best speed modification there is.

Thanks for posting this great report.

Great trip and report, thanks for posting!

172driver
KSMO
21 Posts
This thread is locked. This means you can't add a response.
Sign in to add your message

Glass cockpit vs steam gauges for low time PPL (and getting into a fast aircraft early on)
Around the world in 4 weeks - trip report
Corona / Covid-19 virus - airport and flying restrictions, and licensing / medical issues
Do you feel you have no more interesting challenges?