Apologies, Kyp, I meant a boat trip, like I did from e.g. Lesbos to Turkey. A flying day trip is impossible on most of the smaller Greek islands because the airport is open for only one short slot per day so an overnight stay is necessary.

Very interesting detail you posted, however. I am not likely to visit Turkey anytime soon, after reading some of the stories of recent visits. I did LTBH in 2009 but that was well organised by the Istanbul aeroclub.


Apologies, Kyp, I meant a boat trip, like I did from e.g. Lesbos to Turkey.

Yes, you just need to have your passport with you.
http://www.mybluecruise.com/places—-meis-kastelorizo-island.html
https://www.tripadvisor.com/ShowUserReviews-g189441-d629575-r319947067-Blue_Grotto-Kastellorizo_Dodecanese_South_Aegean.html

Turkish Kas is opposite of Kastelorizo.If you cant locate a local vessel to go,then you can try swimming to…its so close !

This is an incredible coincidence but I have been thinking about a trip to Kastelorizo for some time and after checking the latest Greece AOPA notes on flying in that country, I signed up on EuroGA to find this very recent thread! A great reason to be here.

I’m thinking of flying there in mid September in my Denham-based Cessna 182. I have an IR so will probably route IFR initially via a night or two in Salzburg and Dubrovnik (possibly spending a couple of days in Losinj which looks lovely) before entering Greece at Ioannina, where I believe AVGAS is available and Fraport is blissfully absent!

I think – at an early glance – it’s then VFR to Sitia for more fuel, before making the longish water crossing to Kastelorizo – which looks quite stunning and relatively untouched by the Easyjet hordes, no doubt because it’s so inaccessible. There’s also Kasos and Karpathos en route which also look interesting and I think are also both public airports, although no doubt with typically very odd opening times…?

It will be a real adventure for me, having flown my 182 around most of western Europe but never to Greece or – in this case – to the edge of Turkey! Very keen to hear about others’ experiences or tips! I’m just starting the research now.

You seem to have done your homework! Nothing to add really.
Yes you will love Karpathos LGKP and Kasos LGKS, the shortest flight that can take place in Greece.
Sitia LGST, Karpathos LGKP and Kasos LGKS are not places that are open all day but in summer period the timetables are quite accommodating for a visit to all of them.
Its the winter season when you cannot combine all of them easily.

BTW, as a UK pilot, note we have a meet-up in Cambridge in May.

That’s a great idea to do the other two islands also. 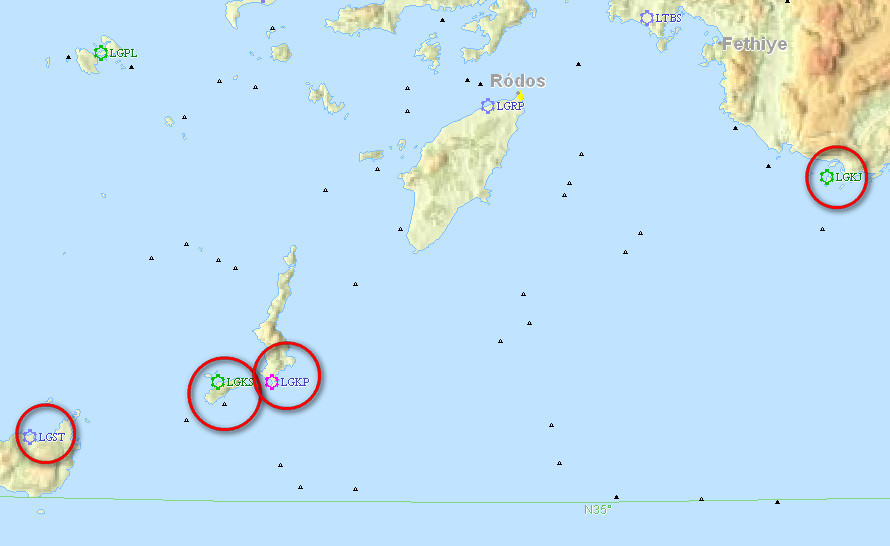 The timetables for Greek airports are always permanently notamed – that’s the only reliable place to find them.

Thanks for the responses!
Peter – where do I find out details of the meet in May at Cambridge?

Under Trips and Airports

How are LGKP and LGKS for a technical stop (or overnight) (from say Southern italy to Egypt)?
JetA1 (DA42)
Immigration (flying to egypt after)
Costs (outrageous like other places?)
Is parking there for, say, a week or 2 very expensive?

You need to check for port of entry status and fuel – here is the updated source for Greece.

Charges can vary hugely; it is a non transparent situation unless it is Fraport in which case you know it will be a big ripoff

Your best bet for Egypt is probably Sitia LGST.

Peter
Administrator
Shoreham EGKA, United Kingdom
168 Posts
This thread is locked. This means you can't add a response.
Sign in to add your message