Avranches le Val Saint Père LFRW has been on my fly-to list for years.

The baie du Mont Saint Michel, between Brittany and the Normandy peninsula, is a UNESCO world heritage site since 1979 and definitely worth an overflight. With a 15 metre tidal range, vast areas are uncovered at low tide, with colours changing from gold to aquamarine to sapphire. The tide comes in very quickly (faster than a galloping horse according to Victor Hugo) and every year tourists walking to the island of Saint Michael’s Mount are stranded. Likewise, based on marshland in a river estuary, the airfield floods at very high tide and is unusable without a seaplane

I used horaire-maree.fr but others are available, and the aéroclub (des Grèves du Mont Saint Michel) also has a webcam. A coefficient of 110 completely floods the airfield, but this only happens a few times a year. This depends on more factors than I understand including position of the sun and moon, pressure, wind, funnel effect in the bay, Coriolis effect, sea swell… better left to the experts. The based aircraft are moved to Granville for the duration

The outbound flight from the UK was into quite a strong headwind, with a lowest groundspeed of 50-something knots climbing over the Isle of Wight. Coming from the UK, I used Cherbourg for customs and immigration, but there’s plenty of choice nearby with Dinard LFRD and Caen LFRK, depending upon which direction you’re coming from. Climbing over the Isle of Wight Cherbourg to Avranches was easy – just follow the coast south and avoid the gliders at Lessay. In the corner of the bay, next to a river, Avranches is actually easy to find; I usually struggle to find grass airfields, but there’s a 400×10m tarmac section on the runway, along with tarmac taxiway. I called before and was advised to land on the tarmac section as the grass was still wet, and was proud to land and stop before the taxiway intersection, in about 350m. There are also 2000 Suffolk sheep kept on the airfield, but a low pass or go-around should move them away. If you don’t manage to kill one taking off or landing, they can be bought from the local butcher

My iPad wouldn’t take photos from the lock screen and I was busy flying the circuit so no aerial shots of Avranches unfortunately. Avranches was built in 1933 and opened in 1934; they used a very big leather bound book for listing the aircraft movements, which is still being used today… you can write your registration and sign your name in the same book as Antoine de Saint Exupéry (1937, twice, in Caudron Simouns), and there’s enough lines left for quite a few more landings. There’s a gap during the war, so the airfield obviously wasn’t used, and it’s interesting looking at how aircraft types have changed over the years. The aéroclub are very friendly, and there’s a nice bar where the public come to have a drink and watch the aeroplanes. The lady who looks after the club is in her 90s and several generations of her family were there. There’s a wonderful view (including the Mont Saint Michel) and the grass is beautifully green and well cut. The club has a Piel Emeraude and two DR400s, and there’s also some based ULMs. Some Spanish pilots spending a few days locally landed from a local flight over the D-day beaches and their first words were “quatre bières s’il vous plaît!”

The club offers local sightseeing flights but there’s a restricted area over the Mont Saint Michel itself, so either fly around or over 3000’ if going to have a look.

Unfortunately a taxi or lift is needed as there’s not much to do in walking distance, but a longer trip with a visit to the Mont Saint Michel is a must-do (25 minutes by car). For lunch Granville LFRF has a Caribbean restaurant on the airfield and others quite close, which I can recommend. I went here a couple of weeks later – essentially the same trip – and have also included photos (the ones with cumulus). Granville has signs in their mini ‘terminal’ for douanes, but no mention of this anywhere else, so I’m guessing it was for short flights to the Channel Islands but that customs/immigration was withdrawn. The town of Granville is on the promontory, and the clouds on the far left are over Jersey (different trip) I had planned a visit to Dinard to clear customs/immigration before leaving, but in spite of the clear blue sky entrées maritimes or sea fog was forecast, which is a problem in the local area. Taking off, the Channel Islands were disappearing, so no tax-free fuel, and I raced it in the half hour flight to Cherbourg. Taking off from Cherbourg, the western coast was already in the fog so I had cut it pretty close. It was then a simple flight on top across the channel and back home. On top over the channel Under the layer, across the Solent

If you keep looking at the TAFs it can ruin your day out, but on the other hand you might not get home…

Thanks for sharing the story and pictures, I did not know it was open to visitors (as the AIP says only local guys and those around) but good to know that and that you can go there by filling a permission form: looks more achievable than Barra beach

, the AIP also says that there is “no peril animalier”, you are suggesting the opposite hehe

Yes, looking at TAFs on Cherbourg, Deauville, Dinard does ruin early morning/late evening planning but should be ok afternoons?


between Brittany and the Normandy

For those who still don’t know who own that bit of land, Brest Info ATSU will be able to confirm

Went to a flyin in Avranches in the early noughties. Best flyin that I’ve ever been to.

The hanger was cleared out, and professional catering brought in, live band followed by DJ, danding, onsite bar, hundreds of seated guests, and pilots from all over Europe. Oh…and pea shooters to get everyone interacting!

When landing in Granville LFRF for lunch, try to get a ride to the restaurant at the golf nearby. The food there is fantastic.


Unless based at one of the local airfields listed on the visual approach chart, you need to request permission to land, using this form and emailed to the address at the bottom.

@Capitaine do you recall how long it took the Avranches form to bounce back in your mailbox?

@Ibra I can’t find the emails, but it was quite quick both times: next working day I think. The original also arrived by post a couple of days later.
Bon vol

Thanks, it looks coming very slowly this week for me (probably May 1st effect?), meanwhile I can just land there Monday with a high vis jacket, say “ras-le-bol” and I will get away with it ;)

Granville will do as alternative…

From this month’s info-pilote, in case you didn’t believe in the high tides. The sign reads ‘access to the runways forbidden to the public’ 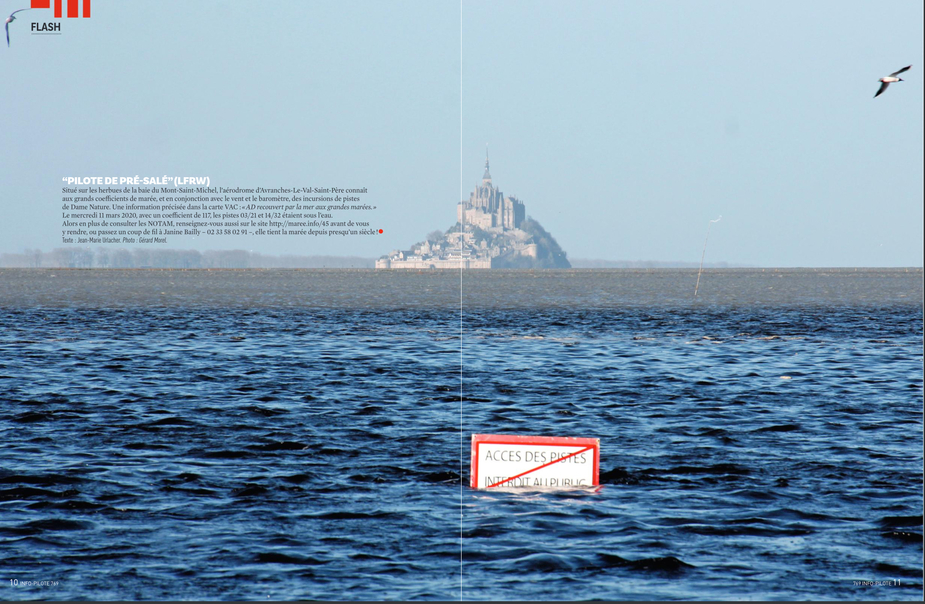 
From this month’s info-pilote, in case you didn’t believe in the high tides

Ibra
ESSEX, United Kingdom
9 Posts
This thread is locked. This means you can't add a response.
Sign in to add your message

Your 2018 flying year, how many hours, and aspirations for 2019?
Idyllic places to fly to...
Tour de Bretagne -- airspace?
What is the best Traffic Avoidance system for light GA in Europe today ?