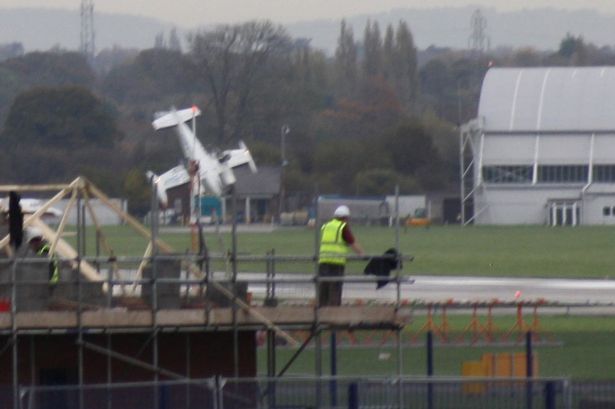 Following the other thread recently with the simulated video showing how fast one can lose control if an engine goes… Nobody knows what caused this very recent one, however.

This was Hawarden? I hadnt previously seen the first picture. Thats quite shocking.

Gear down for approach, it looks like a classic case of getting slow, dropping a wing followed by a rapid spin into the ground. Whether the cause was a mechanical failure, fuel starvation, pilot error or incapacitation, no-one seems to know yet. No fire, which is lucky for the ensuing investigating team. Shocking images.

Is that a Twin Comanche? Is there a report or something?

No; it happened only last week. Usual speculation around the place. The UK AAIB takes roughly a year to produce a report; sometimes sooner.

Where was that? It’s a Twin Comanche, right? Terrible …

On a forum I used to participate on, there were a few twin pilots that banged on about what a non event an engine out is in a twin. I am glad they did as I am able to avoid ever flying with them!! I used to have an acquaintance that did a twin rating and hardly ever flew them at that time. He seemed to indicate to me that engine outs were a non issue. I never flew with him in a twin. I have followed the thread on PPrune (can I say that) and while I am not a twin pilot, I have found the discussion revolving around twins relationship to speed in its various guises very interesting.

It is funny how these myths develop.

The “other video” showed someone without a twin qualification flying a KingAir with an engine failure, in a completely recoverable situation. He had survived the failure but then stupidly try to do a tight finals turn, and then increase power on the outside engine – utterly bonkers. Had he had a modicum of training and experience he would have flown a big circuit and a long final and there would have been no story.

We don’t know what happened in this new case, but we do know that the most similar recorded incident on type was as a result of the flap drive chain failing at a point some time after flap was deployed. We do know that this pilot was experienced and competent, so the chances that it was a mishandled engine failure are rather low.

I have had single engine failures on a variety of twins, mostly Aztec, but also Chieftain and C404. Provided the drills are carried out reasonably expeditiously (and there is no enormous rush) these aircraft, which cover a fair gamut of light twins, will perform quite satisfactorily. It is more of an issue on some types – both low power (Cougar, Duchess, Seminole, Seneca I) because they are difficult to keep climbing and high power (Mosquito and suchlike) because they can be difficult to control – than on the generality, but on Aztecs, Senecas, PA31s, Barons, DA42s, 310s, 340s, C400 series it is just workaday.

So I say that engine outs in most light twins are not a huge issue. If Bloomer now doesn’t want to fly with me, that’s his or her prerogative, but equally loss, and could even prevent one of the adventures sought in his/her strapline.

Timothy
EGKB Biggin Hill
what next
10

So I say that engine outs in most light twins are not a huge issue.

It’s not a huge issue if you have been properly trained and if you are current. The few minutes of asymmetric flight during the yearly proficiency check might not be sufficient, especially if your last checkride was a year ago. I have been instructing on twins since 1992, and as a substantial part of that training is single engine flight (now simulated, but until a few years back we really shut down an engine and the brave ones even landed with one engine feathered), so I have quite a few flying hours of single-engine twin time. Plus three real engine failures (1xSeneca, 2xC421). It is survivable and in many circumstances I would rather put my family on a piston twin than on a piston single.

What happened here is impossible to tell from the phtos posted so far. Someone on pprune mentioned pilot incapacitation which can never be ruled out.

what next
EDDS - Stuttgart
47 Posts
This thread is locked. This means you can't add a response.
Sign in to add your message