VFR trip from EHLE to LFLC, and back - trip report

VFR trip from Lelystad (EHLE) to Clermont-Ferrand (LFLC), and back.

For the start of this journey, check this thread here.

The last weekend of August I made a trip from Lelystad (EHLE) to Clermont-Ferrand (LFLC) in a Katana DA20. Due to the low MTOW of the DA20 and with two men and luggage, fuel stops were planned at Spa (EBSP), Reims (LFQA), Auxerre (LFLA). 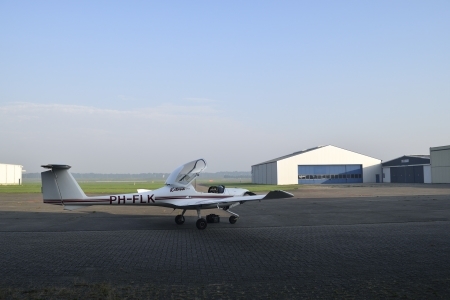 In the week before departure I contacted all these airports, asking for information about the availablity of AVGAS, opening hours and so on. A few days earlier I had send in the flight plan (via Homebriefing) and it was accepted, though it took me 3 times to get at that point because ‘they’ needed some waypoints and directs are not accepted. I filed some low level IFR waypoints, which were accepted. 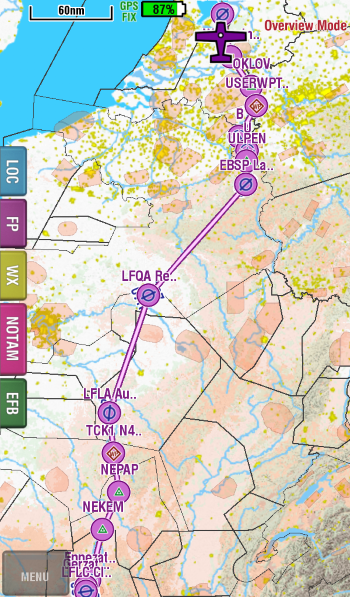 The evening before departure I refueled the airplane, so that would save us some time on departure. Friday morning we were early at the hangar and prepared the plane and our selfs for the journey ahead. After getting the latest information on the weather, NOTAMs et cetera, we took of and head for Spa in Belgium. The weather for this weekend would be very nice and only on the return trip clouds and a front were forecasted. Well, we were prepared for that with a plan B.
We had a fair bit of tailwind, which is great because the cruising speed of the DA20 is between 90 and 100 kts indicated. Our groundspeed showed around 125 kts. 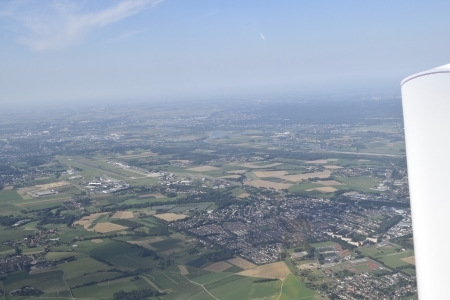 Beek Airport is on the left in this picture.

After Beek we changed frequency to Brussels Info and flew to Spa. After landing I did refuel and prepared for the next leg: Spa (EBSP) – Reims (LFQA). 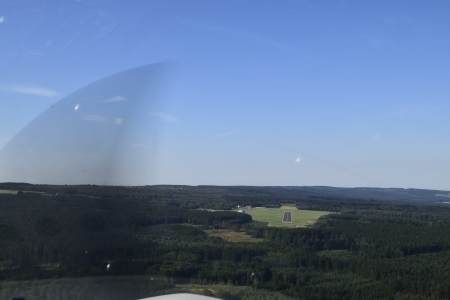 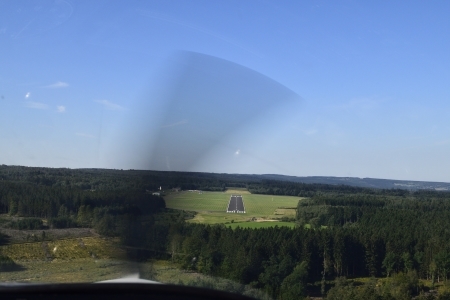 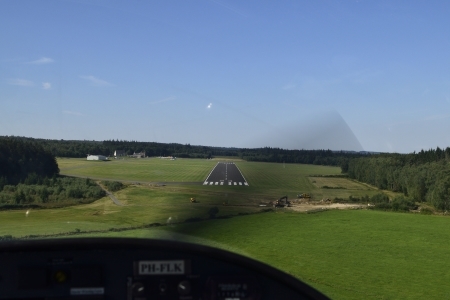 Thanks to the era of digital communication I could simple send the flightplan for the next flight by using my tablet. After confirmation of the FPL we sat down for a little drink. The actual temperature (OAT) was higher than predicted, so I recalculated the T/O performance to be shure we could get up in the air. That was no problem, although the fences and trees at the end of the runway looked close to me on take off. 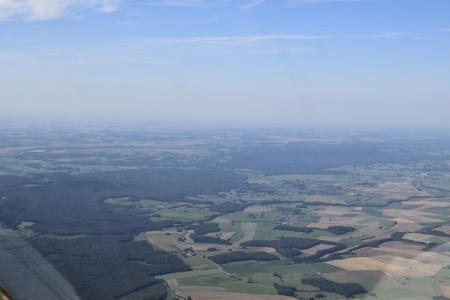 The border of Belgium and France lies within these woods.

After passing the border we were handed over to Paris Info and request climbing to FL044. We were cleared for FL044 and flew uneventful to Reims. We had still tailwind, all the way to our destination. At Reims we landed on the middle of the day or … lunch time. So, we had to wait a little while for some one to show up before we could refuel. On Reims the OAT at the platform was already 30 degrees! 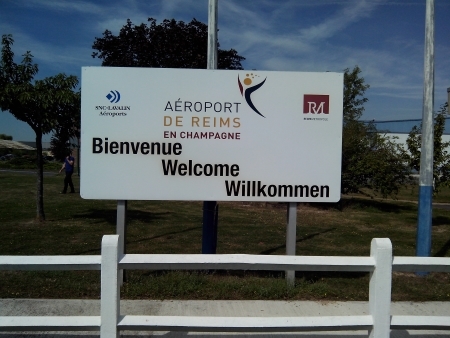 Preparing for the next leg: Reims (LFQA) to Auxerre (LFLA) we didn’t need a FPL. Downloaded the latest weather info and NOTAMs and off we flew. We were glad to be up in the air, because of these temperatures (still 24 degrees at FL044). 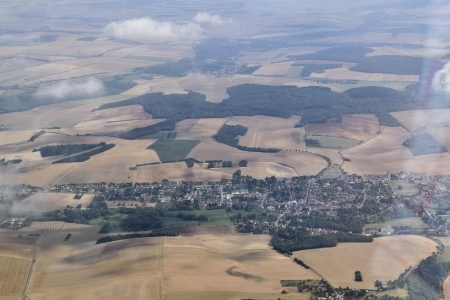 At Auxerre it was very quite; just our plane and another one. We drank a cold coca cola and prepared for the next and last leg. There’s a lot of administration involved when you land and refuel at a French airports; two types of forms to be filled out by the man in the tower, with each form copied and stamped two times! And that for just 9 euros landing fee! At the platform the OAT was at 36 degrees! And that had an impact on the T/O performance of the DA20. No danger here, but climbing was a bit of a challenge. Again we climbed to FL044 and remained there all the way to our destination, Clermont-Ferrand (LFLC). 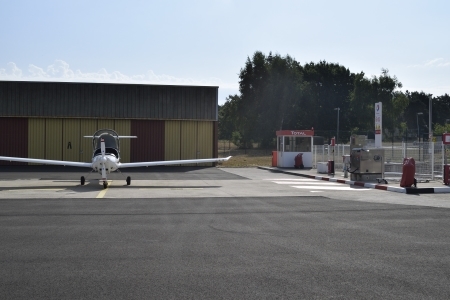 Auxerre, at the fuel station.

Arriving at LFLC I was mentally familiar with the procedures, by reading the AIP and also because my brother flies there with the aeroclub. So informed on forehand on the different arrival procedures. After all it was very easy and we were directed on an arrival overhead the city. Which is quit an experience because it lies a bit uphill, so you’re flying rather low above the rooftops in final.
We landed at Clermont-Ferrand (LFLC) at 18:15 (LT). My brother was waiting there for us at the aeroclub d’Auvergne. He had followed us on Flightradar24 almost all the time, and even listened on the frequencies. Without even telling him, he knew exactly when we would arrive. Big brother is watching you! 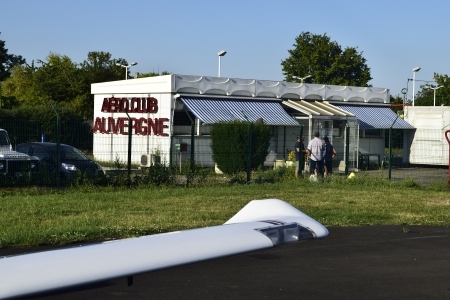 The weekend we (my father and I) stayed at a little hotel in the centre of the city of Clermont-Ferrand and spend some time walking in the park and the city enjoying the views. In the evening having diner with my brother. 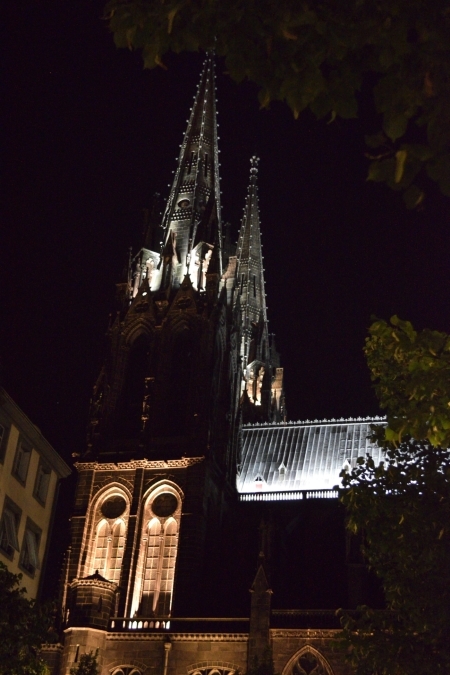 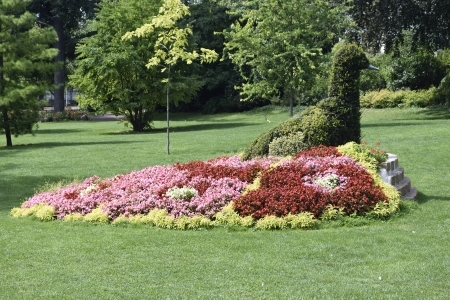 Nice parc in the centre of the city. 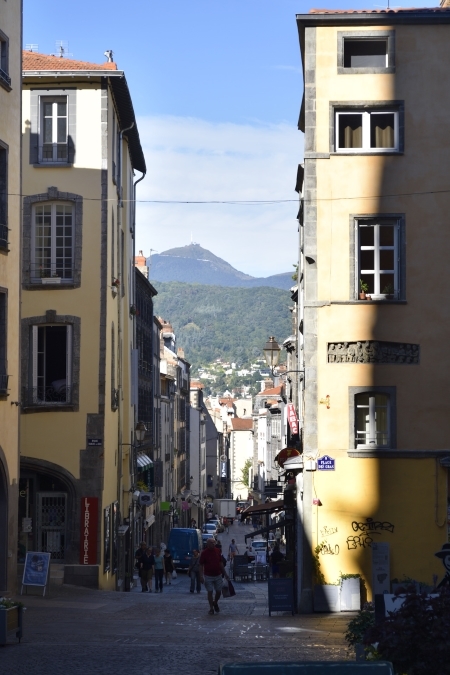 You can see the Puy de Dôme from here. 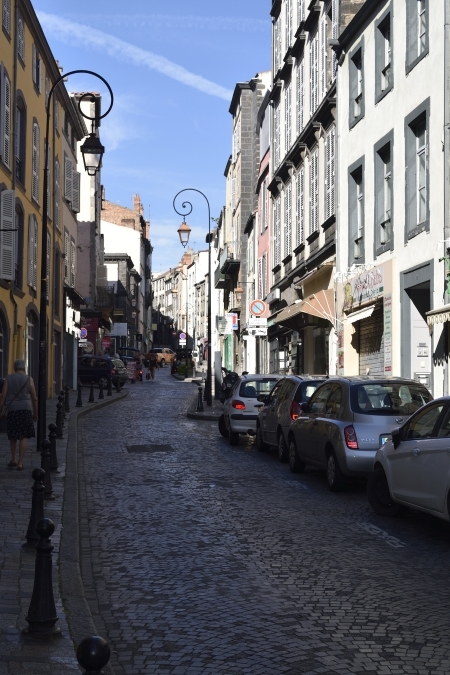 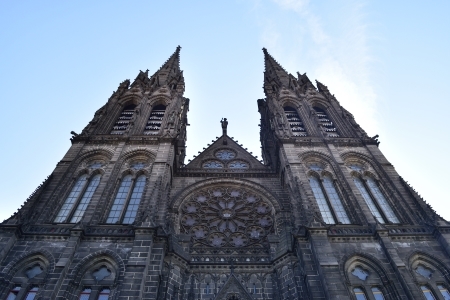 The next day, sunday, early in the morning we got out of bed and packed our bags. My brother drove us back to the airport. It would be lovely and perfect VFR weather for the return trip, untill the north of France. 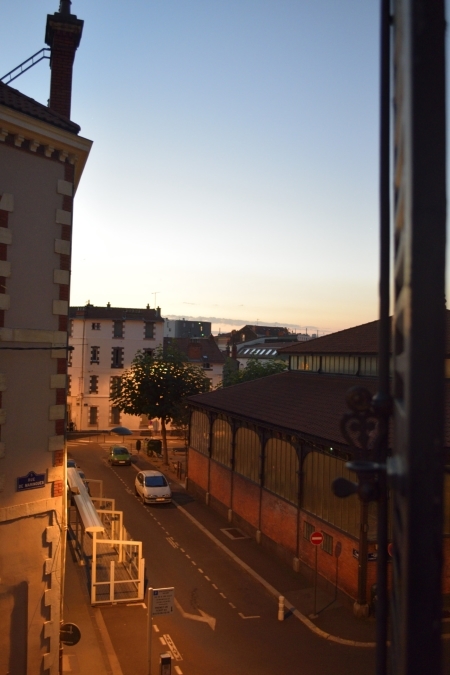 Nice weather, as seen from our hotel window.

A front was moving slowly from west to east over northern France and Belgium. The new function to obtain information on precipitation in EasyVFR did show a big CU with rain on our route. During the leg from Auxerre to Reims it appears right on our track and spot on with the information in EasyVFR. Fortunatly I had a good view on this CU from the aircraft and had to deviate just a little to fly around it. No big deal here.
At this time there were two layers of clouds. I choose to fly between them if I was able to see the ground, just to have less chance of turbulence. So we did fly in between the two layers with enough view on the ground. 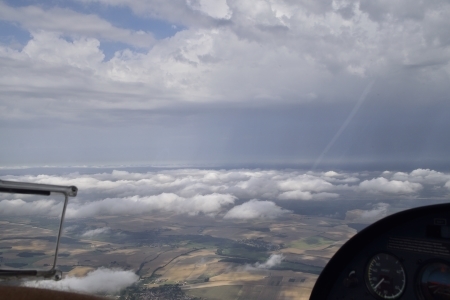 Flying between layers of clouds.

At Spa Airport it was rather busy with helicopters and airplanes. Did I know there was a F1 race at Franchor-Champs this sunday?! ;-) A sharp look-out was needed with heli’s flying on and off. 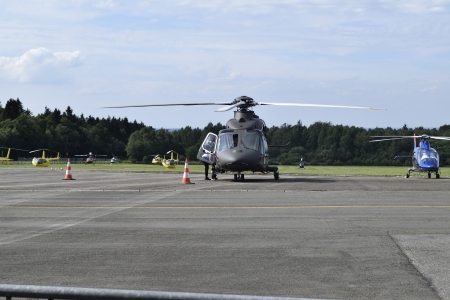 Now that we were more familiar with the airports we spend less time on the ground, which resulted in a shorter flight back. Also the tailwind adds to this. At 17:28 LT we set foot at Lelystad Airport (EHLE) ending this marvelous and memorable flight. 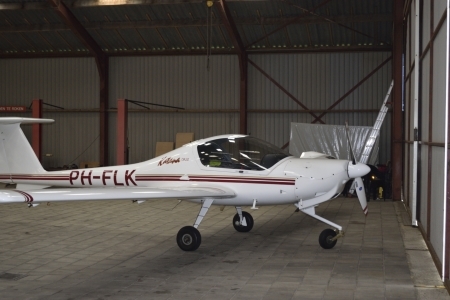 The Katana back in the hangar.

Some info and statistics on this trip.
Refeuling at the airports was no problem, AVGAS was available and paid for with a creditcard (indeed it was all AirBP, so the Total tankcard I had couldn’t be used). At all airports (except LFLC, I still haven’t had an invoice) we paid a landing fee of about 9 euros. The weather was perfect for VFR flying, calm, a bit of tailwind an allmost no clouds, ecxept a high layer of cirrus. The temperature was very high that Friday.
On the flight back (Sunday) the temperature was lower, about 20 degrees on the ground. Fortunaly we again had tailwind on our way back to Holland. We saw groundspeeds of 140+ kts! While there were more clouds and a front moving from west to east over northern France and Belgium, the flight was also uneventful. In the north of France we flew between two layers. The upper an overcast and the lower a broken. First time a did this kind of flying in between layers of clouds.
We were very lucky to have this kind of weather and could fly the whole trip on VFR. And … we could fly exactly the route as planned! Each leg was in between 1 to 1,5 hour flight.

Looks like a great trip! Thanks for taking the time to write it up!

Many thanks for the great report

Interesting about AIR BP. I too have found that they seem to have organised a total turnaround. For about 10 years almost nobody took it, and now it is frequently practically mandatory, even in France, and especially at self service pumps (on most of which nobody can work out the menus so have to call for help anyway, but that’s another story

I was flying (more or less) the same route IFR that same weekend. Trip report (in Dutch) here.

lenthamen
EHLE
9 Posts
This thread is locked. This means you can't add a response.
Sign in to add your message