What is VFR on top? (merged)

I see a lot of posts here that mention VFR on top, but I have no idea what it means! I can’t find anything about it in any of my PPL books. Is it only relevant to IFR flights? Can someone please explain to this newbie :-)

Don’t worry too much about it… It is basically VFR out of sight of the surface, I.e. Above a layer of cloud.

In FAA parlance this should strictly speaking be called VFR over the top, i. e. a VFR flight above cloud and thus not on sight of the surface.

VFR on top is an IFR term used to describe flying IFR in VMC above a cloud layer.

As to my knowledge the term “VFR on top” is an FAA IR term. On an IFR flight one can request “VFR on top” and then cruise above a cloud layer in VMC and at an appropriate VFR flight level (x500 ft) for the heading. It is still an IFR flight. What I don’t know at the moment – and I would like to know – is: is one allowed to change levels on pilot’s discretion or does it need a clearance to do so?

You are still subject to IFR rules so if assigned an altitude you must stick to it. Generally however you would not be assigned one.

a.?A pilot on an IFR flight plan operating in VFR weather conditions, may request VFR-on-top in lieu of an assigned altitude. This permits a pilot to select an altitude or flight level of their choice (subject to any ATC restrictions.)

b.?Pilots desiring to climb through a cloud, haze, smoke, or other meteorological formation and then either cancel their IFR flight plan or operate VFR-on-top may request a climb to VFR-on-top. The ATC authorization must contain either a top report or a statement that no top report is available, and a request to report reaching VFR-on-top. Additionally, the ATC authorization may contain a clearance limit, routing and an alternative clearance if VFR-on-top is not reached by a specified altitude.

From a PPL perspective it’s still relevant because in France, and I presume European wide now (?), as a plain PPL without an IMC Rating (aka IR) or a full Instrument Rating, then you can still be “VFR On Top” so long as you climb and descend through clear air. In practise its not a great idea unless you can guarantee that at the end of the flight or in case of an emergency, that you can descend through clear air / gap in the cloud base.

This is VFR on Top: 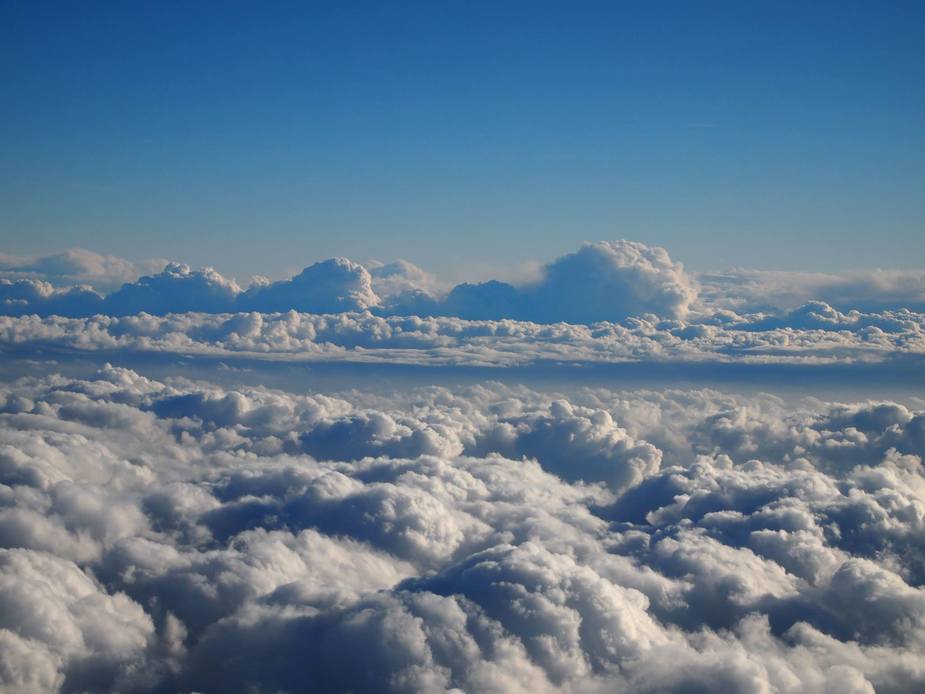 Unless you are in Class G airspace and below 3000ft, there is no legal requirement to have the surface in sight.
You need to respect the VFR rules regarding minimum visibility and distance to the clouds.

There’s a risk involved, in that you could get trapped on top over an overcast, with no holes available to descent below the cloud base.

“VFR on Top” is a subject not covered during the PPL training. Some instructors say it is illegal.
If you prove them wrong (for example by showing them a statement from the CAA), they say it is still illegal because you must be able to always make a safe forced landing.
An engine failure will put you in IMC, for which you are not trained.

The meaning of VFR-on-top it is very different between the U.S. and Europe. Note that 172driver and JasonC are referring to the U.S.
In some European countries (Germany, Holland, Denmark and probably many more) it is legal for a VFR-only pilot to fly without the surface in sight, on certain conditions. Those conditions vary between countries, but will probably be harmonised as EASA rules takes force across Europe. As I read the SERA (Standardized European Rules of the Air), the only condition will be as lenthamen writes, that you are not in class G airspace below 3000 ft MSL / 1000 ft GND.
Presently additional requirements for “VFR without the surface in sight” in Denmark are: 1) At least 150 hrs PIC, 2) aircraft approved for IFR, 3) weather forecast indicates no more than 4/8 (i.e. scattered, not broken) clouds at destination, 4) IFR fuel reserves and 5) flightplan submitted.
In the U.S. there is a significance to the concept VFR-on-top when flying IFR, as it relieves the pilot of some of the normal obligations. See JasonC’s post. When flying IFR in Europe, however, it does not make any difference. When IFR you fly according to the same rules in IMC and VMC (the only difference being the requirement to look out for traffic whenever VMC). So the term VFR-on-top is not used for IFR in Europe. However, the term VMC-on-top could make sense for a European IFR pilot wishing to describe flying conditions – but there is no change of rules or clearances.

Very interesting. The difference between US and Europe explains why I have seen some contradictory posts!

@lenthamen It appears that the term is highly specific to any given country. None of my German instructors ever tried to advice against it. As a VFR-only pilot it makes a lot of sense to watch the sky coverage well to make sure a descent close to the destination will be possible in VMC. One can always ask for METARs en route and in fact in Germany you can hear frequently pilots asking for data to decide whether it is safe for them to climb or stay below.

@JasonC I know it has a meaning for FAA IR. But is also known by ICAO and can be used outside the US on an IFR flight? What would the DFS controller answer when I request “climb to VFR on top”?

Stephan Schwab
Frequent travels around Europe
69 Posts
This thread is locked. This means you can't add a response.
Sign in to add your message

Free online VFR charts for Europe (merged)
Trapped above icing conditions in a Lancair
What is it that prevents private pilots from venturing abroad?
VFR on top, but not as we know it