Welcome to EuroGA. This website is the home of interesting, informed and intelligent discussion about General Aviation in Europe. We hope you’ll enjoy it and find it useful. Please do get involved by posting on our forums and take a look at our articles. If you’d like to publish any yourself then please get in touch.

What We’re Talking About On EuroGA

While awaiting for the UK CAA to give me a definite answer, is there someone that can guide to what is needed for someone wishing to obtain a PPL from a UK NPPL SSEA, except for the PPL skills test?

The CAP manual is “reference only” and been told it’s not relevant anymore.

The unit is certified for VFR and IFR operations “as a primary source for aircraft attitude or turn coordination information and secondary source for altitude, airspeed and vertical speed in a single instrument" says Garmin.

At 2.5k it even sounds reasonable in aviation terms. Plus the advantage of dripping the vac pump, stand by vac pump and assorted piping.

For those of you that enjoy aviation themed adventure novels, I have just finished my first contribution to the genre – Chocolate Hills.

For the past five years I have been slowly writing a novel set here in Northern Thailand, and featuring a SeaBee. I have now got around to getting it published on Amazon as a Kindle eBook … _276849420
It is free for those with Kindle Unlimited.

As a first attempt at writing a book, it is no literary classic, but IMHO it makes for an entertaining read. :-)

Avionics wire/cable, and how long does it last?

This has to be a seriously obscure topic

Most avionics work is done with Raychem 55 or similar wire 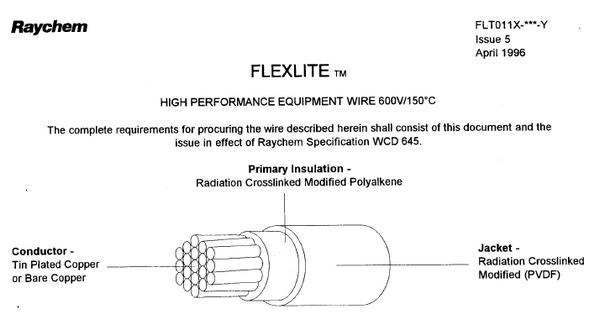 I have noticed that a lot of the stuff is very hard to solder, evidently due to corrosion. This isn’t just on the ends; you can cut the wire a metre from the end, strip it, and it still won’t solder. So whatever causes the corrosion gets in through the insulation.

Apparently this is a well known issue; avionics people I know have pieces of the stuff which they say are old. But they keep odd bits for odd jobs because the stuff is so expensive, and some of the styles cannot be bought by the metre and the standard size reels (300ft or so) tie up a huge amount of money.

I realise most avionics installers crimp rather than solder but I can’t see a crimped joint being affected less by the wire being oxidised. All that happens is that the installer won’t notice the wire is dud because it will crimp just the same.

There is a lot of old stock around, but I’ve bought “brand new” wire from proper stockists such as RS (example – data sheet which suggests Raychem 55 now comes from Tyco) and immediately upon receipt it turned out to be just the same.

I wonder whether this is a wider issue which explains some intermittent issues. Crimping in particular does rely on a gas-tight joint being created. With soldering, if it doesn’t wet properly then you can see it isn’t wetting properly, but with crimping there is no feedback.

This is a question I’ve been asked by a man buying our aeroplane. There are PBN codes that you can fill in, in field 18 on a flight plan. Garmin makes an effort to describe them here:

What would be the correct entry in field 18 of a flight plane for a 430W? If any?

IFR into the UK – how will it actually work ?

In my series of flying IFR to/from the UK: I am trying to get to grips with the exotic flying IFR in class G airspace, and dealing with NATS in the meanwhile. I trying to picture the flight in a PA28-161. Do you help along?

I am planning a flight LFQQ-EGBJ. The router generates TRACA B3 RINTI L10 DVR Y803 SFD DCT GWC DCT PEPIS DCT NUBRI DCT CPT DCT KENET DCT MIMBI DCT SIREN DCT MALBY, which validates in Rocketroute at FL100. So far so good.
I am expecting TOC before leaving mainland, and therefore crossing into controlled airspace of London Control somewhere at RINTI, after Lille having had co-ordinated with London, right? I assume they will not throw me out of controlled airspace, right?
Somewhere at PEPIS, I leave class A airspace, but as I will cruise along Y321 and L9, I will still be in controlled airspace, and hence talking to London Control enjoying full radar service, right? I expect to start descent after KENET, sinking below the 9000 ft MEA of L9, I should expect to get bumped out of controlled airspace, and be passed to London Information, degraded to flight information, right? Near EGBJ, I should take initiative myself to switch to Gloster Approach, or will London switch me?

For the return flight, I&#x2019;ll take EGBJ-EBKT. This route validates at FL090: MALBY L9 KONAN L607 MAK
After takeoff, I expect to be talking to Gloster Approach. Will they co-ordinate with London Control for airways clearance, or will they let me do the negotiation while in uncontrolled airspace on my way to MALBY? Will they really let me cruise at FL090 near London, or will I get vectored away from that busy airspace? Somewhere over the channel, they will pass me to Brussel Control. The rest is familiar.

I see the analogy, but it doesn’t quite hold.
A gold rush was mostly a matter of luck. Critically, the gold was definitely there – it was just that some found it and most didn’t. The viable electr…

Hangar Talk
National CAA policies around Europe on busting pilots who bust controlled airspace (and danger areas)
The infringements aren’t going down. They are in nearly all cases a product of pilot distraction.

The gasco “course” has no effect; it is mostly an embarrassing joke which was set up to feed revenu…

I would not think 100 hrs a year or any fixed number is the operative thing for a twin but regular assymetric drills are. If you are IR, then that comes naturally with the IR renewal, but if not, …

Flying
What is the latest on Flying in EU with LAPL & Self Declaration
Hello,

Just wondering what is the latest on Flying in EU with LAPL & Self Declaration medical.
I understand that France will allow the above combination but I don’t know of any other EU country…

Absolutely. That is what has caused the whole thing to get past a point of no return.
The main reason for this however was the lack of leadership and allowing the complete mayhem of contradicting …

Not necessarily. If the TS/CB/TCU are isolated and not embedded, you can avoid them visually.
As for your weather scenarios, they all look ok to me. Specifically: