187 Posts
achimha
01
Deliveries Begin for World’s Fastest Single Engine Aircraft INDEPENDENCE, Kan., July 1, 2013- Cessna Aircraft Company, a Textron Inc. (NYSE: TXT) company last week delivered the first production units of the Cessna TTx to customers following a ceremony at the Cessna facility in Independence, Kan. The TTx holds the distinction of being the world’s fastest commercially produced and certified fixed-gear single engine aircraft. “The customers will now find out what we know, that the TTx is an aircraft which will wow pilots with its performance, and surprise passengers with its comfort,” said Brian Steele, business leader for the Cessna TTx. “Everything about it is fun, fast and sporty, while at the same time intuitive and comfortable. The G2000 avionics are so advanced and at the same time familiar. The interior appointments add a refined touch of class to the overall TTx experience.” A high performance, all-composite aircraft, the TTx is designed for advanced pilots with advanced technology and greater comfort in mind. The leather-wrapped side-stick control and additional horsepower provide advanced TTx pilots with speed and performance close to that of a jet. The speed comes with style, as the fit and finish of the TTx has been likened to detailing reminiscent of a luxury sports car interior. One of the customers accepting delivery is David Barnes, Chief Executive Officer of Watermark Retirement Communities. Barnes said he plans on using his TTx to travel between the 32 Watermark properties throughout the country. Representatives from Pacific Air Center (PAC) were on hand to assist with the event. PAC is a Cessna authorized sales center covering the southwest United States, with bases in Long Beach, Calif., and Scottsdale, Ariz. Production line flow of the TTx was announced in April of 2012 at the Sun ‘n Fun International Fly-In and Expo in Lakeland, Fla. The aircraft has a top speed of 235 ktas (270 miles per hour), an operating ceiling of 25,000 feet and an optional Flight into Known Icing (FIKI) system, enabling pilots to file flight plans allowing for varying weather conditions. The TTx is the first aircraft to be equipped with the Garmin G2000 avionics system which features a glass cockpit with dual 14.1 inch high definition displays and touch screen controls. “Cessna has a versatile, reliable workhorse in the 208 and the world’s dominant flight trainer in the 172, so it is rewarding to see an aircraft as unique and distinctive as the TTx leave the Cessna hangar to round out our single engine offerings,” said Jodi Noah, Cessna senior vice president of single engine/propeller aircraft. “In true Cessna fashion, the teams involved in delivering the TTx to the marketplace have placed quality and performance as top priorities, and they delivered.” Cessna provides additional training for pilots in the TTx, due to the additional horsepower and capabilities of the aircraft. Learn more about the TTx at Cessna.com. B-roll footage of the TTx can be viewed and downloaded here.

This is a relaunch of the Cessna (formerly Lancair) 400.

I heard they moved production to Mexico and found the quality, ahem, "short of expectations"

I flew in this a few years ago 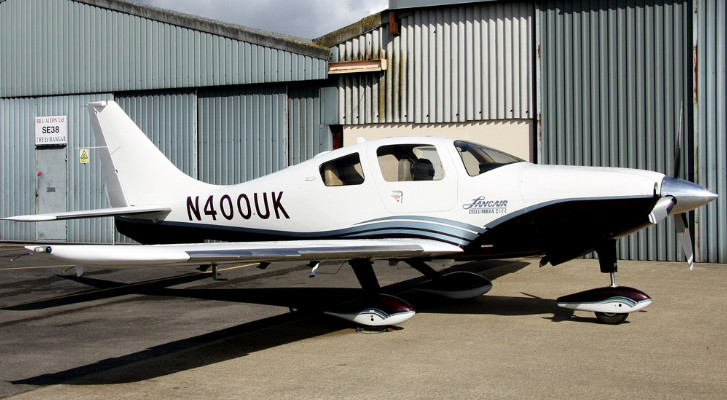 and while it was very nice and very quick, you paid dearly in the fuel flow. At ~ 200kt TAS, the fixed gear must be costing at least 20kt and those extra 20kt cost a huge amount of horsepower and thus fuel.

I cannot help thinking that this is a modern version of the Mooney "life is short, fly fast, avgas is the cheapest thing you can put in your engine" philosophy, which worked for a bit on the pilot population that is happy with a 1950 airframe and pretty soon the whole thing hit the rocks and Mooney is now just a spares operation (like quite a few others in GA).

I don't see that Cessna is going to buck that, despite the modern (and very nice) airframe and very new avionics. The last price I saw was $700k.

If it was retractable it would burn perhaps 30% less fuel for the same speed and it would be a great formula. What they have now is just a Cirrus with a bigger motor and an even bigger price tag.

They just don't listen to the market. There is no 'modern' engine in the 540 class. Maybe the SMA, but with 230hp still not powerful enough.

Engine business is like a spare part operation. They sell more spare parts and overhauls than new engines for new planes.

and while it was very nice and very quick, you paid dearly in the fuel flow. At ~ 200kt TAS, the fixed gear must be costing at least 20kt and those extra 20kt cost a huge amount of horsepower and thus fuel.

What they have now is just a Cirrus with a bigger motor and an even bigger price tag.

Speed and fuel consumption are not linear unfortunately, consumption roughly increases with the square of the speed. So Peter's 30% estimate is quite sensible.

Until recently, there was just no question whether a fast airplane will have a fixed or retractable gear. Only the recent designs chose to go with fixed to keep the cost under control.

The TTx is not a winner and it won't be. It's too similar to the Cirrus which is an established aircraft and comes with CAPS, a real USP that virtually all customers will want to have. Obviously Cessna tried very hard to come up with USPs and the best they could find was bribing Garmin to not offer the G2000 to Cirrus for some time.

I cannot help thinking that this is a modern version of the Mooney "life is short, fly fast, avgas is the cheapest thing you can put in your engine" philosophy

Mooney not only built these kind of aircraft (that was rather late in their history) but also the most efficient 4 seaters on the market.

Only the recent designs chose to go with fixed to keep the cost under control.

I don't see that as the reason.

If you climb under a TB20 and look at the gear, there is hardly anything there. There is a hydraulic pump under the back seat which lists for about $5k but the cost to the mfg will be about $500.

The total mfg cost of the retractable parts cannot be more than $1000 and is probably way less than that if they are made in-house by a Part 145 company which can fabricate everything from solid raw materials by CNC milling, or can buy in off the shelf industrial parts and certify them.

Similarly, the total cost of the aluminium in the hull of a $500k 4-seater is about $1000 and that is aviation-released ally which you don't have to, ahem, "inspect" and, ahem, "recertify"....

I think the fixed gear in these "170-200kt TAS" planes is a specifically American marketing stunt of the past decade and a half.

The only rational reason I can see for fixed gear on a ~$500k plane is to withstand heavy abuse, real dirt strip ops, a totally negligent lack of maintenance, etc.

Don't you think that if retractable gear were so great, Cirrus wouldn't have done it sooner or later? Speed sells, after all!

No, apparently the speed benefit would be more than offset by a combination of manufacturing costs, maintenance costs, insurance costs/difficulties and weight.

Also, simplicity sells. The generation of pilots that want to have lots of "stuff to do" in the circuit (gear, prop, cowl flaps, etc.) is ending, because they have understood that nowadays, there are different challenges to be mastered, namely operating the ever more complex avionics and managing the complex airspace of today.

Retractables need wings thick enough to accommodate the gear. The likes of Cirrus's and 400 TTx's seem to have relatively thin wings. With their existing wings, seems they could not accommodate retracting gear even if they wanted to do. What's the trade off here.

The wings need to be thick enough only on the inboard portions. You make the wheels go underneath the hull, so only the "bit above the wheel" needs to fit into the wing.

Simplicity does sell, sure, but that's what I referred to under "marketing" above.

However I would say that the "complexity" of having to make sure the gear is down before landing, and leaning the mixture very occasionally, is negligible compared to the knowledge required to utilise the modern avionics. The difference is that fancy avionics is much easier to sell because it looks nice.

A few years ago Cessna provided some insight to CPA (Cessna Pilots Associations) about how they chose which models to restart after the 1986-1996 hiatus. Keep mind mind they only restarted production of existing aircraft with existing TCDS, all development costs written off, only small improvements. They said that they determined there would be no market for the retractable due to very high cost they would have to sell at.

Don't underestimate the cost of simple "CNC milling". There is a lot of cost involved in quality control, insurance, keeping stock, etc. If Cessna had continued building the retractable gear variants, it would not have increased the number of the total fleet by much (most aircrafts out there are from the late 70s) so the economics for the parts would not be significantly different than today where they are just supplying spare parts for the existing fleet. Some parts of retractable gear cost over $20,000 today and yet Cessna has difficulties producing them. If it was only $100 worth of aluminium, they'd be happily supplying them.

One part of the Malibu nose gear was selling for $50,000 until some years ago when Piper found another supplier that was willing to produce it for $6,000.

Economics of ultra low volume production sucks (and that includes all aircraft). Volkswagen builds more cars in an hour than Cessna builds aircraft in 10 years.

PS: While Cessna has the advantage of all development costs written off long time ago, their products are extremely labor intensive to manufacture, a 1950s manufacturing process. That is why a Cessna is still very expensive today.

achimha
187 Posts
This thread is locked. This means you can't add a response.
Sign in to add your message

Will turboprop engines replace pistons in IFR tourers?
Mooney makes a comeback (and shuts down)
The end of the avgas piston twin?
Robin DR401 as an IFR tourer