How would you file a flight plan say if you are flying across Europe? – Is it submitted once to destination, or do you submit a copy to each crossing territory?


How would you file a flight plan say if you are flying across Europe? – Is it submitted once to destination, or do you submit a copy to each crossing territory?

The flight plan should only be filed once, but addressed to everyone enroute who needs to see it. For IFR it is really simple: The flight plan is addressed to the Eurocontrol IFPS (Integrated Flight Plan System) which redistributes it to everyone who needs it. For VFR it is much more complicated, unfortunately. You can find information on addressing in the AIP of each country you fly over.

Traditionally, you file a flight plan with an ARO (AIS Reporting Office or “briefing”) which will then take care of the addressing. This option is still available in most countries (notably not in the UK). Flight planning programs like SkyDemon etc. that can file flight plans typically address them correctly, but you can’t be quite sure.

It’s quite a broad topic.

In “classical aviation” the responsibility for distribution of a flight plan is with the departure ARO – basically the admin office of the airport of departure.

They would have a thick book covering the whole world and they would work out the addressing and then send your FP via an international network called the AFTN (which used to be telex based but later went to leased lines) to the appropriate places.

Europe does things differently in many ways, and IFR FPs are distributed using a central computer system called the IFPS (also called Eurocontrol).

I have some notes here.

The comment about the UK is not correct because most airport towers around Europe (with the exception of Sweden, of course

) will not deal with your flight plan either (unless you are willing to painfully phone it through to some taxpayer funded centre) but it doesn’t matter because nearly everybody files flight plans via one of the online services. I use EuroFPL.eu for VFR FPs; they are also used by satnav apps such as Skydemon. EasyVFR uses Rocketroute which is another online agency.

Flying out of Malta, you have a lot of water to cross to go anywhere. You can fly to Italy easily enough, to the very scenic Sicily, and even to Greece. VFR will be fine for all of that.


The comment about the UK is not correct because most airport towers around Europe (with the exception of Sweden, of course ) will not deal with your flight plan either

In what sense is that comment incorrect? You yourself have said that the UK has no ARO.

The norm today is national AROs, e.g. Sweden has one ARO, Germany also has one. You can find that info in the flight planning section of the AIP – typically AIP ENR 1.10

In Poland, when I file a FPL by phone, I also call an ARO; they used to call themselves “briefing” up till a few years ago. The ARO offices are located in multiple cities, not sure where precisely.
When I file a FPL online and there is something wrong with it, someone from one of the AROs will call me.

In Germany, if you want to file a flight plan without using a “third party” programme, you can file directly via our ANSP, Deutsche Flugsicherung (DFS). Their website is here: https://secais.dfs.de/

It requires a (free) registration and login before it gives you the ability to file. The website also provides briefing data (especially NOTAMs) and, usefully, the only freely accessible online source for the German DFS VFR charts I know of (useful for planning but, due to the way it is presented on the website, not for in-flight navigation)

EDIT: While playing around with the website, I noticed that the charts do not only cover Germany but also quite a bit of all neighbouring countries, from Calais in the west to Danzig/Gdansk in the east and from Göteborg in the north to Lugano in the south. All of Denmark, Austria, Switzerland, Luxembourg, Belgium and the Netherlands is covered.

Does anyone have any experience filing vfr flight plans via ForeFlight in Europe?

E.g. in Croatia there are several AROs (located at international airports) and you call to closest one to your departing airport for filing FP while in Slovenia there’s only one ARO (I guess they are located at LJLJ airport).


but addressed to everyone enroute who needs to see it

It should be addressed to the recipients specified in ENR 1.11 in the country of departure. They will forward it to the appropriate recipients in the remaining countries in your path. 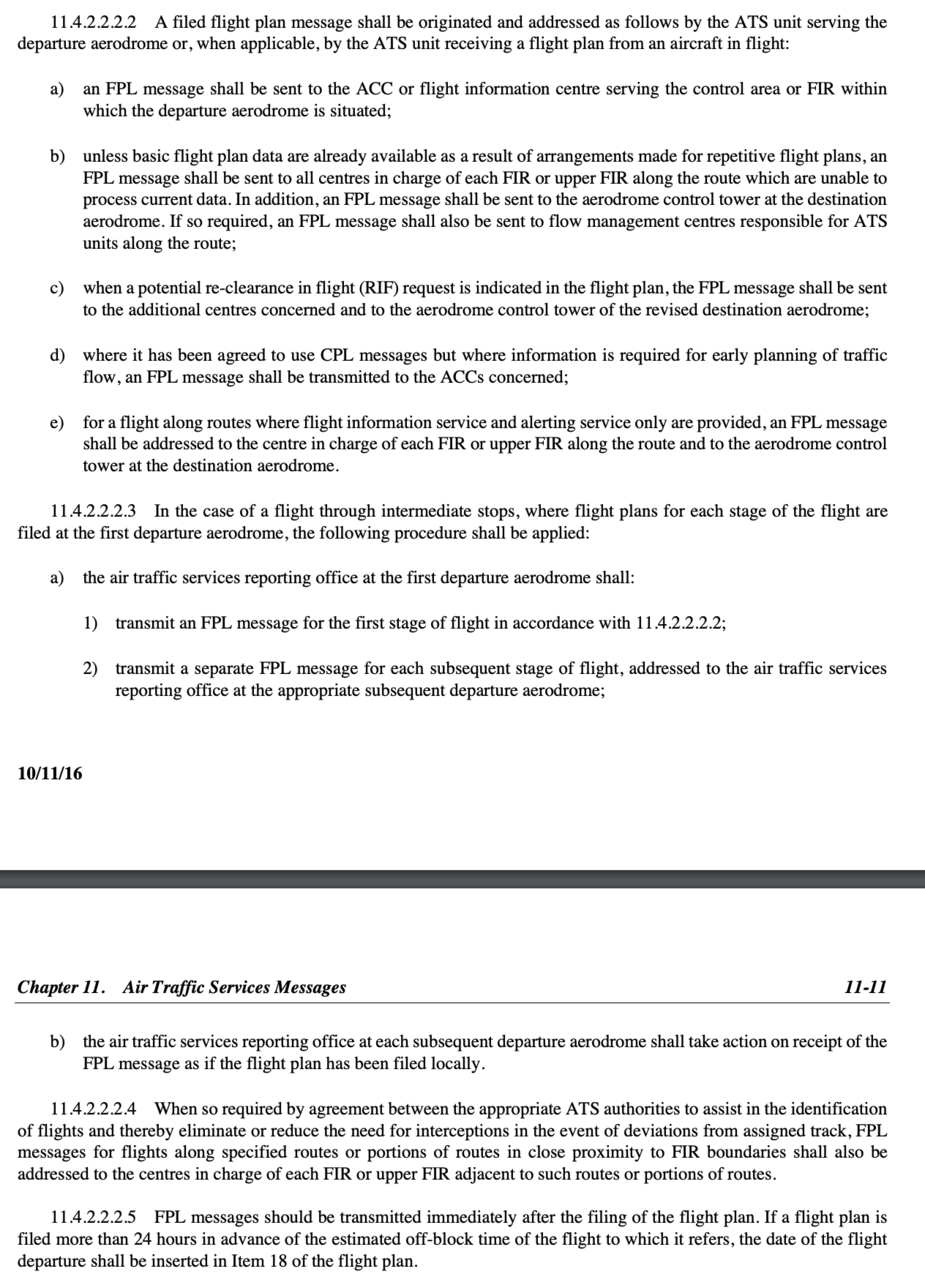 It should be addressed to the recipients specified in ENR 1.11 in the country of departure. They will forward it to the appropriate recipients in the remaining countries in your path.

The excerpt from PANS-ATM states that “the ATS unit serving the departure aerodromes”. From the definitions part of PANS-ATM you can see that an ARO is regarded as an ATS unit. (That was actually news for me.) So basically what this says is that the ARO should distribute the flight plan which is what I wrote also. This distribution is done according to AIP ENR 1.11 for each country concerned with the flight.

The question is what you should do when you don’t have an ARO (or for some reason don’t want to use one). Then you have to take care of the addressing yourself, just like an ARO would have done,

Airborne_Again
ESKC (Uppsala/Sundbro), Sweden
10 Posts
This thread is locked. This means you can't add a response.
Sign in to add your message