You get a partial or total loss of power.

It also drives an EDM700 wild because it sees EGT fluctuations which “cannot happen” and it shuts down the offending EGT probe inputs – until you power cycle the unit. Here, #1 and #2 got shut down, and this is extremely distracting to the pilot 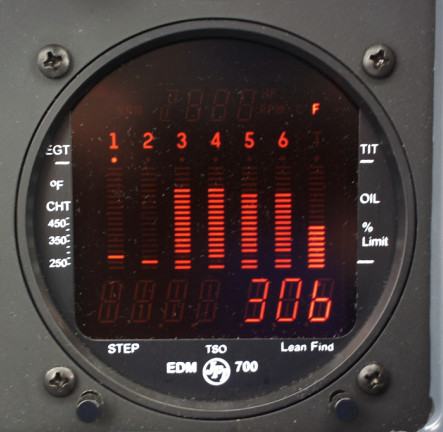 It requires a fairly solid IMC and probably some tens of minutes.

The aircraft is however completely clear of any ice at such temperatures – as one would expect for stratified cloud.

Clearly this is rare, for the usual reasons to do with GA flight profiles, but also because not many pilots know that at such temps you are very unlikely to get airframe icing.

The fix is to immediately use the alternate air door. The door itself may need a bit of force, presumably because the inside of the duct is coated with ice.

How do deiced aircraft deal with this?

I think propeller TKS would protect against it, because some of the fluid will end up inside the air intake ducting, hit the four little tubes in the servo and melt any ice on them (I believe only one of the four is used to sense the airflow) and then end up harmlessly in the engine.

AFAIK, the TB20 POH requires you to use alternate air whenever you are in possible icing conditions. There was a deadly accident near Munich for exactly this reason.

BTW: this issue and the clogged fuel sensors are what makes a carbureted aero engine more robust. The fuel servo is a critical part of an engine and it can fail in several nasty ways.

It merely melts the ice when you initially open the alternate air door.

Where is the Munich report? I can’t see how you could establish this as the cause post-crash unless somebody survived.

Same issue brought down an Arrow on an IFR proficiency checkride in Finland 5 years ago. They didn’t use alternate air, spent 4 minutes in cloud on a VOR/DME approach. I happened to see the cloud, very nasty.

Same issue brought down an Arrow on an IFR proficiency checkride in Finland 5 years ago. They didn’t use alternate air, spent 4 minutes in cloud on a VOR/DME approach

What was the precise process involved? See my previous post… I don’t know how using the alternate air will protect the servo from getting iced up unless the air around the alternate door is a lot warmer.

Isn’t the alternate air taken from inside the engine compartment, i.e. without ducts from the outside?

Carbureted engines take it from somewhere near the exhaust stack but they have the extra issue of a temperature drop inside the carburetor. In principle the same issue exists with injected engines, just the conditions are less frequent.

Primary cause was determined as ice in the fuel servo. Bad decision making is another thing.
Here’s a link to the English language report.

That’s a very interesting report, ToniK. Many thanks for finding it.

I have never had any engine issues flying in “traditional” icing conditions e.g. -5C. They seem to happen only around the -15C area which most people (who know the subject) would not necessarily regard as hazardous. There is zero airframe icing. So why would the fuel servo ice up at such temperatures? Could it be that at temps around -5C one would always be running (in my case, anyway) the prop TKS because those conditions are totally obviously hazardous from the POV of airframe icing, and TKS does protect the fuel servo?

If using alternate air does provide a full protection, that is an easy solution. The only cost is that the engine ingests more dirt so wears a bit more, but that effect would be negligible.

If using alternate air does provide a full protection, that is an easy solution.

It’s what the TB20 POH requires. It’s also part of the checklists I saw.

Yes, but that doesn’t mean it actually works. I would bet anything that nobody has actually measured what the temperature rise across the engine is. It isn’t the sort of thing somebody would bother to do; there are so many “accepted truths” in this business which keep turning out to be wrong – because nobody ever actually tested it. You could be flying in -30C and if the temp rise is 25K then the fuel servo will still be fed with -5C air, and potentially ice up. The same problem occurs with carb icing but that has killed such large numbers of pilots that it is fairly well understood.

Peter
Administrator
Shoreham EGKA, United Kingdom
76 Posts
This thread is locked. This means you can't add a response.
Sign in to add your message

Steep approaches (in VMC) - do you fly them, and why, or why not?
Fuel injection servo issue?
When to use alternate air?
In-flight icing incident in Cirrus SR22T (FIKI)