I found this rather amazing photograph of a landing swan on Wikipedia. Note the ruffled feathers on top of the wings showing flow separation as the wings are at the critical angle of attack. 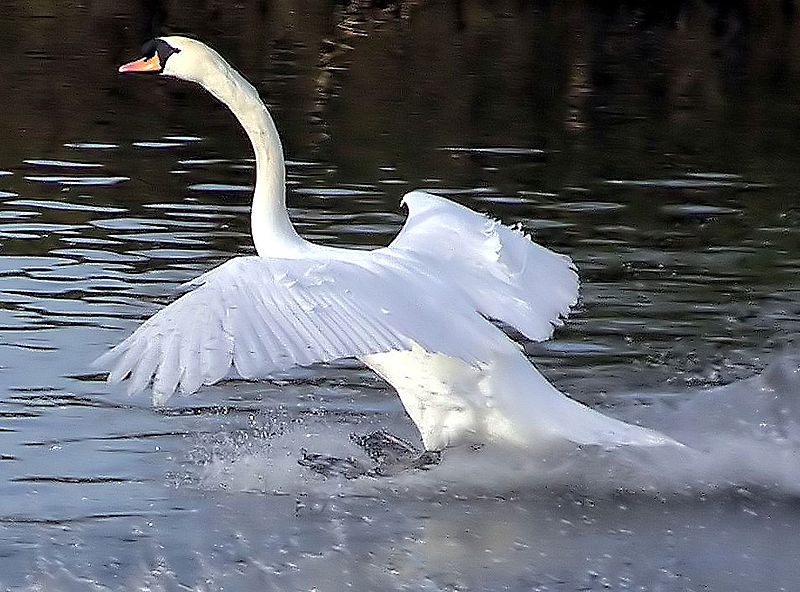 Or maybe there is some air sneaking through the gaps between the feathers and the ruffled feathers on-top are re-energizing the flow. Kinda like slotted flaps. Nah disregard, your hypothesis is probably right

You mean they know how to do a full stalled landing? or how to break airflow flow using moving parts of their wings?

No they are speedbrakes. Note however the tail strike.

I once had an amazing experience that I wasn’t able to video, as it was before mobile phone video cameras, but I swear was true.

I was standing at a lakeside in Epsom Common when a largish number of ducks arrived, maybe 20.

They then created a visual circuit, which they joined “downwind”. They all followed the same pattern, just like our circuits, and they made “circuit calls”, ie particular, and I thought distinguishable, quacks at different points in the circuit, which were approximately downwind and “turning final”. They did not, however, all land in the same place and “clear the runway.” Instead they adjusted their final approach fairly late on to land alongside each other.

I thought I was dreaming it – it seemed like something out of a cartoon – but that’s how it happened. I have never seen it since.

Did you manage to see the tower duck running the ATZ radio? (yes, I noticed they land into wind and parallel runways but never circuits & overhead joins, not yet

The circuit was to check if you had a gun.
The Downwind Quacks were “Does he?”
The Final Quacks were “O.K. He doesn’t”.

I haven’t seen a whole flock like Timothy, but I did observe a landing rook, which did a straight downwind pass at 1-2 m height, then turned into the wind and landed.


I was standing at a lakeside in Epsom Common when a largish number of ducks arrived, maybe 20.

Are you sure it was Epsom common? Or even in the UK? Ask yourself, were they wearing hi-viz vests?

Downwind was at about 70’ at a guess

Timothy
EGKB Biggin Hill
23 Posts
This thread is locked. This means you can't add a response.
Sign in to add your message