Paying the correct amount of Duty/VAT when importing parts from the USA, and the requirement for 8130-3 or EASA-1 forms

in order to not pay duty on avionics, they have to come with a EASA Form 1

What is the source? That’s definitely not true. It sounds like a really standard disinformation from the European aviation parts supply chain

You merely need the shipment to be classified as AIRCRAFT PARTS.

Not really incorrect that an Authorised Release Certificate is required but the set of documents acceptable is broader than EASA Form 1.

From the EU tariff manual:

The autonomous Common Customs Tariff duties laid down in Regulation (EEC) No 2658/87 for parts, components and other goods of a kind to be incorporated in or used for aircraft and parts thereof in the course of their manufacture, repair, maintenance, rebuilding, modification or conversion is suspended. In order to benefit from the suspension, the declarant shall present to the customs authorities an Authorised Release Certificate — EASA Form 1, as set out in Appendix I to Annex I to Regulation (EU) No 748/2012, or an equivalent certificate. The certificates which are deemed to be equivalent to Authorised Release Certificates are listed in Annex II to the Regulation (EU) 2018/1517.

Details can be found here, including what documents other than EASA Form 1 are deemed to be equivalent:


Not really incorrect that an Authorised Release Certificate is required but the set of documents acceptable is broader than EASA Form 1.

So does this mean that uncertified aircraft parts, e.g. for UL aircraft are not tax exempt?

It would indeed mean that, and wbardorf’s find is quite amazing, but I have never heard of this applied in practice.


So does this mean that uncertified aircraft parts, e.g. for UL aircraft are not tax exempt?

I came across this when researching the importation of aircraft parts from Europe to the US, minus paperwork in spite of them being for a certified aircraft. The OEM parts vendor was not in a position to issue the paperwork – 50 years ago the same parts manufactured by the same vendor were certified by the airframe manufacturer which no longer supplies parts.

The aircraft parts duty situation is regardless defined by international treaty, applying equally regardless of which way the parts are moving, and I found that it defined Civil Aircraft Parts as being those for certified aircraft.


I have never heard of this applied in practice

In my case, I was hand carrying the stuff to the US from Europe and declared it as aircraft parts. I also showed the US customs guy a photo of the plane

He was not familiar with the rules, tried to look them up, ran out of patience and told me there was a slim chance I might get a small bill later. (I didn’t, however I did pay VAT/MwST in Germany which BTW is payable regardless of export, for any personal vehicle parts).

For importation of parts for a UL into Europe from the US, many parts are also applicable to certified aircraft and could be supplied with an 8130 and sometimes an EASA Form 1. If not, they are likely LSA and would come with airframe manufacturer’s LSA certification paperwork which I suppose might work. A bigger issue might be parts from Van’s or other Experimental category supplier, which would not issue any paperwork other than a commercial receipt.

Quote Reg no. and/or or include a copy of the airworthiness certificate with the shipping docs if claiming the “airworthiness tariff suspension” (rate of duty 0%).

To answer @Peter ‘s question, the request for a EASA Form-1 came from the shipping agency which is representing me before the state customs people. I don’t believe they are trying to shaft me, they have been good to work with and genuinely trying to make the best of a new-for-them situation. I chose to not pursue the duty exemption due to the reason stated above (6 one way, 1/2 dozen the other).

The problem is if you buy a used one.

Aircraftspruce have also been running a “scam” whereby they charge a load extra for the 8130-3. I have no idea how they can generate it if they don’t get one from the vendor.

From a customs POV it makes sense that uncertified aircraft parts are not tax exepmt.

From the above URL, here is the list of acceptable forms. It contains nothing of value – basically just the various versions of “Form 1” 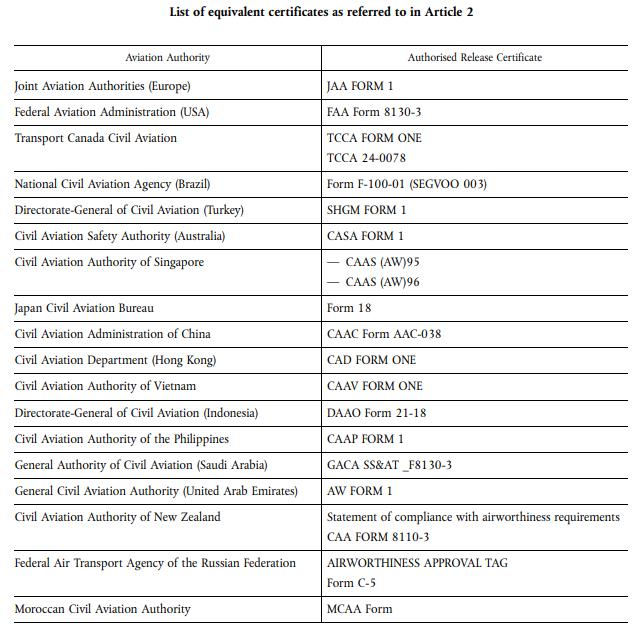 Peter
Administrator
Shoreham EGKA, United Kingdom
49 Posts
This thread is locked. This means you can't add a response.
Sign in to add your message

Aircraft VAT / import VAT / getting busted upon landing in the EU (merged thread)
KX165A and KX155A trade-in or GNC255A - to achieve cost effective 8.33
Comparing national registrations
EU Import duty for an overhauled engine from the USA ?