JCB's G650 at Monterey - and the freedom of flight.

About a week ago I flew up to Monterey from LA. Coincidentally, it was my first ever IFR flight solo (I only messed up a little). What I didn’t know was that it was the Pebble Beach Concours d’Elegance car show in Monterey that week – a known stomping ground for the ridiculously rich. A Ferrari sold for $38 million at one of the auctions I later found out.

The place was rammed. I’ve never seen more private jets in my life in one spot! As I taxied in I noticed not only one, but two Gulfstream G650’s sitting side by side, as well as a private 757 (I kid you not). I’d never seen a G6 in the flesh before, let alone two. Very impressive looking birds. One was some Bahrain registered thing (A9C-BAH) and the second was venerable Brit institutions JCB’s M-JCBB from the UK. Monterey Jet Center had room for me to park, but just barely. The others didn’t. My old steed was ingloriously pushed into the farthest corner as the very helpful ladies at the front desk informed me of how crazy busy this week had been. I was oblivious.

Anyway, after our little tourism excursion to the Aquarium in town, I filed my second solo IR flight plan ever. As I taxi out JCB’s G650 fires up and taxies out after me. I must have missed their clearance delivery, so didn’t know where they were heading. As I do runup, tower ask me if I can expedite and depart before the G6. Sure thing I say – I was pretty keen not to add wake turbulence to my second IR departure ever by departing after him – so, off we went into the marine layer. As I broke out on top at around 2500ft (as the sun was setting), I could hear the G6 depart right after me. We both got vectored around a little by Oakland App – me with my broken Svenglish, and he in his perfect RP British. Nice and calm night flight home.

Only today did I check where JCB’s pretty jet went. And it just reminded me of that sense of freedom that the idea of flight can trigger. M-JCBB flew direct from Monterey to LFTH on the Cote d’Azure. And it did it in 10hrs 18 minutes. It’s very exciting to know that maybe in my lifetime, there will be aircraft that we might be able to afford that could give you the same sense of freedom and speed. Maybe. That ability to connect two completely different cities, on different continents and in different time zones.

Aircraft are truly time machines in that regard.

As I taxied in I noticed not only one, but two Gulfstream G650’s sitting side by side, as well as a private 757 (I kid you not).

That reminds me of the European soccer championship in 2008. When Russia played in the semifinals (?) in Vienna, not only LOWW was at full capacity, but one of the two runways in Bratislava was closed down and used as a parking area for the Russian jets – from Citations to a 767, everything was there :-) …

I’ve never seen more private jets in my life in one spot!

How many do you think? I’am currently in Olbia (Sardinia) and they have maybe about 70 jets parked there currently (and I’m not talking about small Citations…). A few 737s as well, but no 757.
BTW, they park them one face to the other (with maybe a couple of metres between them) to fit more of them on their already giant GA apron…

Bosco, I agree. Olbia is for me the most jets I have seen in Europe.

Probably around the same amount, maybe a little less. There must have been at least 20-30 on the ramp at Monterey Jet Center alone. The other FBO, Del Monte, had no space left, so must have had similar numbers.

World Cup in South Africa was pretty crowded. Had to park them in the grass. 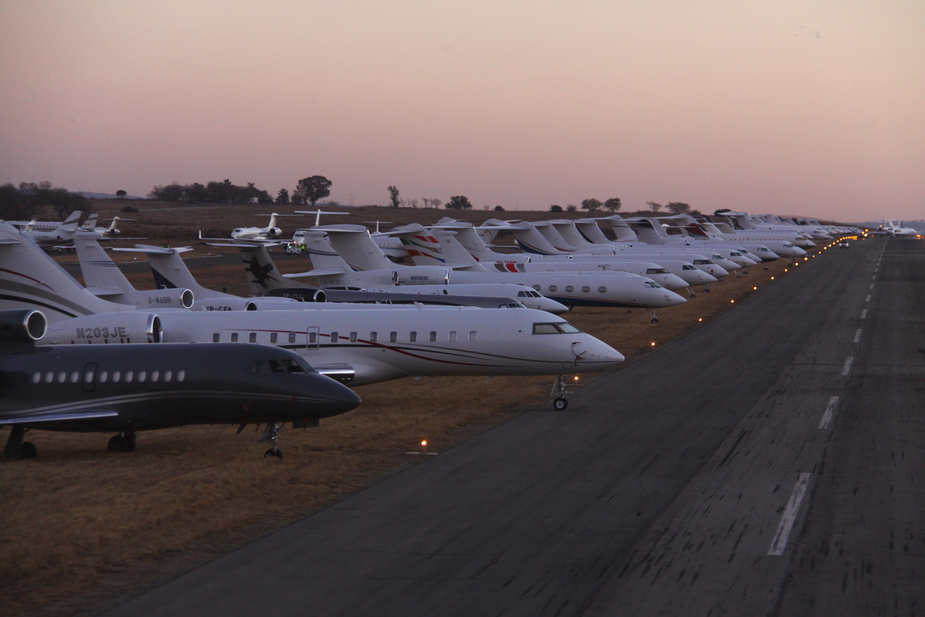 I cannot believe they got them off the grass under own power.

A big piston twin (e.g. a 421) will sink into even slightly wet ground so far it needs a tractor or similar, and ropes around the main landing gear, to pull it back out.

Adam, that picture is just nuts.

Large-size bizjets & corporate airliners tends to peak in Singapore during F1 which is coming up next month.

It’s very exciting to know that maybe in my lifetime, there will be aircraft that we might be able to afford that could give you the same sense of freedom and speed. Maybe.

Not wanting to spoil your optimism, but what makes you think that? My observation is that less and less people can afford private flying and even corporate owners get more and more cost-concious when it comes to luxury expenditures like the (fleet of) business jet(s). But maybe that’s different elsewhere.

what next
EDDS - Stuttgart
Peter
09

I think GA can deliver fantastic value for seeing places. There is so much of Europe which is scenic and easy to get to by GA but which is difficult to get to by public transport. Mali Losinj is one example; it would take you all day to get there otherwise, and probably 2 days if the ferry timetable isn’t favourable. Same for any number of Greek islands.

You can also buy a bizjet quite “cheap” nowadays. A $10M one can be had for $2M, in a good condition, from what I am told. I nearly got a flight to Iceland recently in a $1.5M one which was about $7M new. It was pretty clean. The operating cost is one big issue, and you don’t get the transatlantic range unless you spend tens of millions. A typical small bizjet has only the range of a TB20 so not as useful for flying around Europe as it might appear.

A big piston twin (e.g. a 421) will sink into even slightly wet ground so far it needs a tractor or similar, and ropes around the main landing gear, to pull it back out.

The grass in the photo looks very dried up, I suspect the ground is as dry and hard as concrete where they are parked.

alioth
Andreas IOM
31 Posts
This thread is locked. This means you can't add a response.
Sign in to add your message

I figured out why I am not flying a Gulfstream G650
Piaggio introduces the new Avanti P180 EVO.
How not to do a soft field takeoff.
Premier 1A ride and pictorial.