Rotterdam - Le Touquet and back

For most of you probably nothing to lose a lot of words about, but as a freshly-minted PPL, I’d like to share some impressions from today’s lunch trip. It’s my second successful longer solo trip (Münster EDDG a week ago, and yesterday I was on my way to visit family near Mengen EDTM, but had to turn around west of Köln due to the weather), and I had this morning 8h PIC time after getting my licence in my logbook; The plane was one of the club’s Robin DR400 with the 135hp Continental Diesel engine. Photos were taken with a suboptimal cell phone camera, sorry for the quality.

Left Rotterdam at quarter to eleven in the morning, planned routing was EHRD → LUMEN → DUNKY → Cap Gris Nez → LFAT with the plan to fly around 3000 to 5000ft depending on the weather. Outbound, nothing much to report, requested a TMA crossing from Oostende Approach from LUMEN to DUNKY which was granted at 3000ft, and then handover to Lille Info until I was approaching Boulogne. Brügge under the left wing: 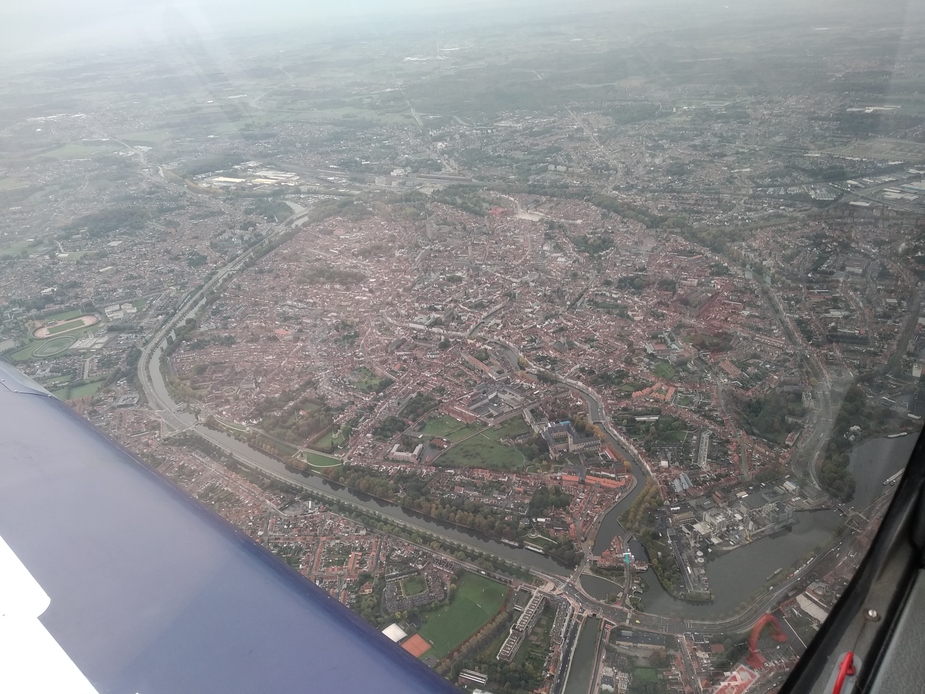 Interesting tidbit: The Dutch AIP prescribes either using homebriefing.nl, or fax to Schiphol ARO as the only means to file a flightplan starting from a Dutch airfield, and one of the reasons I heard was that they want to get the adressing right. Nonetheless, my flightplan which crossed the EBOS TMA should have been adressed to EBOSZTZX according to the Belgian AIP, but wasn’t. Before I left, a call to Schiphol ARO created an AFTN text message to said adress, but it seems that this was in the end not that critical or necessary as the flight plane for the trip back (which was already filed in the morning via homebriefing as well) was not adressed to Oostende directly but no issues with any crossing.

Anyway, after a quick lunch and refueling I had to head back around half past one, climbed after leaving the LFAT CTR to 5500ft and enjoyed a nice view over the coast line. 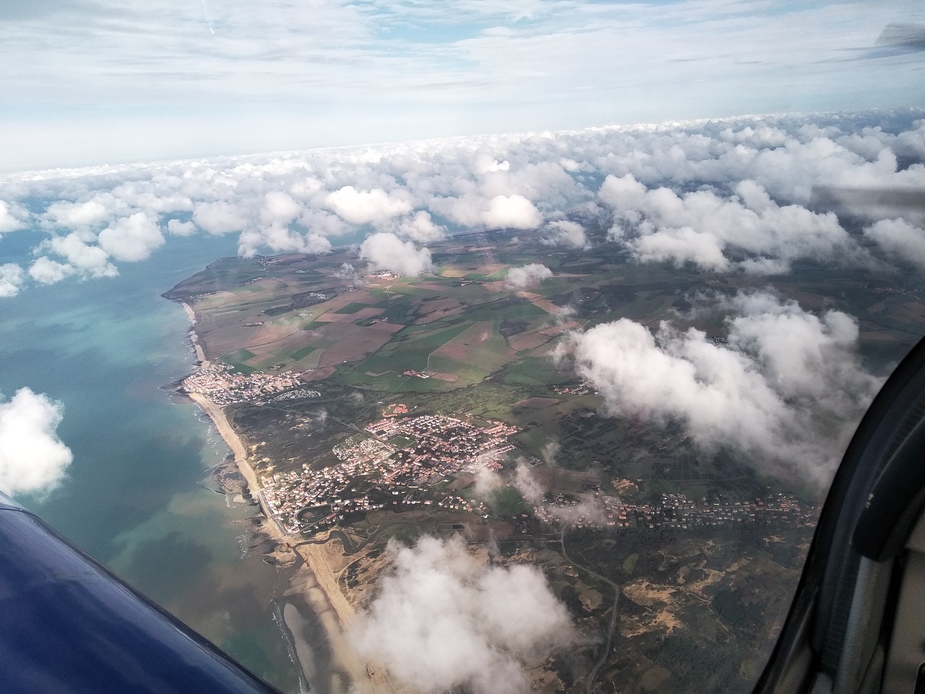 Return route was the reverse of the outbound one, i.e. following the coast line. I asked Lille ca. 10 minutes before reaching DUNKY to coordinate a TMA crossing with Oostende, which worked out nicely. Oostende wanted me on FL50, and cleared me from DUNKY direct to LUMEN at the FIR boundary. Other audible traffic was negligible, I heard maybe three or four Belgians at 1000 to 2000 ft. Some containers in the new part of Rotterdam harbour and Den Haag in the background, and I was back. 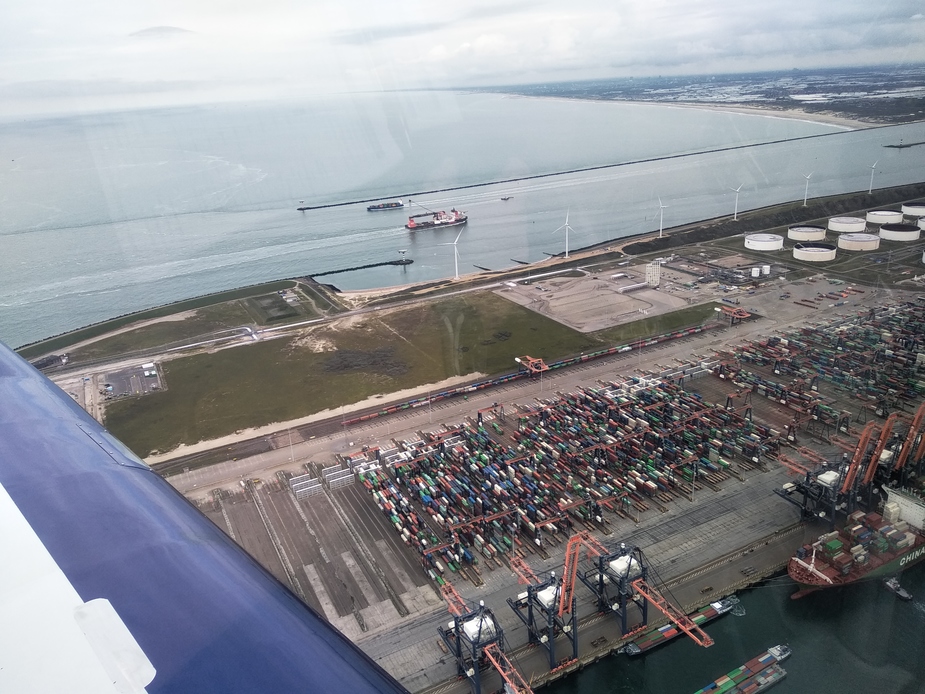 Things that worked out really well: I was not sure what to expect crossing along the Belgian coast line with the airport and the military zone of Koksijde, and fully prepared to route low-level along the highway – but in the end I got exactly what I wanted from ATC. I really must thank the people on this forum to get me into a mindset that leads to results, as for example one of my colleagues who has his licence since 1.5 years was baffled when I told about today’s trip as it seemed that he thought crossing the general class C in Belgium a massive difficulty and would probably never tried what I did.

Second thing (surely preaching to the choir): Single pilot was so much more relaxed with Skydemon (or EasyVFR). I had of course marked up the map, and the GNS430 was running alongside as well, but the quick access to the information at your fingertips really took a lot of stress away. I remember back a year ago or so when said colleague and I went to Spa with paper map alone (well, I ran Skydemon on my phone as backup), he was visibly quite work-loaded.

So, thanks for all your trip reports that made we want to get out as well, and I hope I can alo contribute a little bit in the future.

Thanks for the report. Had the pleasure of visiting Rotterdam, nice club you have there, and those Diesel Robins looked very clean and well maintained!

Since the club gained handling privileges some time ago again, I can of course recommend to make a stop here if you’re in the vicinity or want to visit Amsterdam (it’s an hour’s train ride from Rotterdam Centraal) or Rotterdam. With six Robins and two PA-28 (also retrofitted with the Conti Diesel), the availability of planes is quite good, and it does not cause huge disruptions if they go on maintenance, so that’s easy to work with.

As a German, I was a bit suspicious about what we would call “Vereinsmeierei”, i.e. this forced-socialising, and pompousness of club officials as Peter decries it, but due to the amount of active and enthusiastic people here, I feel quite welcome and happy – really a stroke of luck to have this and the airport 15 minutes from where I live.

And thanks for the dutch FPL filing info. Does SD works (via faxing to ARO) ? Amazing that every country has its tool for filing (Olivia, IPPC, AFPEX, etc…), are we supposed to subscribe to each one ?

Hi Sebastian, that‘s the best you can do: fly a lot to foreign place. That will give you great experiences and you will have so much fun. And posting about these trips helps because it‘s allways a reminder to fly down there if never been there.


And thanks for the dutch FPL filing info. Does SD works (via faxing to ARO) ? Amazing that every country has its tool for filing (Olivia, IPPC, AFPEX, etc…), are we supposed to subscribe to each one ?

The problem is that according to the Netherlands AIP ENR 1.10 Section 1.1.2.3.2 “AFTN or SITA shall not be used for submission of flight plans and or flight plan related messages (except messages from other AROs). VFR flight plans will be addressed by the ARO.”, which rules out every GA VFR online filing tool as they either have their own AFTN gateway or use e.g. the one from EuroFPL (KBLIHAEX?). Since SD does AFAIK offer no fallback-fax method, it as well as EasyVFR etc. are not useful for filing when starting from the Netherlands … As you say, it’s a silly situation as the neighbouring countries seem to have no (or at least less of an) issue with online filing.

Don’t know if I am missing something here but I have visited Maastricht NL several times, last time 2018 (Great City to visit, a lovely area of Holland) and always filed my VFR flight plan back to the UK via SkyDemon. It could not have been simpler. SkyDemon did all the addressing automatically. Just called Beek Twr for engine start and flew a route over southern Belgium, Northern France and home.

The thread Peter linked is good, and it appears SD found a way to file in the Netherlands. Great !

Jujupilote
LFPT, LFEH
9 Posts
This thread is locked. This means you can't add a response.
Sign in to add your message