Just come across this

Documentation here. (I can't open the PDF for some reason).

This kind of functionality has been around before. I think my Garmin 496 has it (never tried it) but I heard the "glideslope" terminates some 500ft AGL, or 1000ft AGL...

I installed it about a year ago. I never managed to get the database installed, however, I think I gave up too fast. I noticed the app has been updated regularly, which could be is a good sign. I also notice that according to the documentation it needs augmentation (EGNOS) to fly the "ILS" properly. Not a surprise since that is what is required for flying vertical guidance GPS approaches generally. But it also remains for me to succed getting my andriod to pair with the bluetooth gps receiver I use for the iPad (GNS 5870 MFI). It is probably me not trying hard enough, or cleverly enough. I might try again.

I use my old Garmin 96C fairly successfully for backup vertical guidance, so my incentive to teach my telephone the same trick is limited. But the app looks cool.

Yes, the "glideslope" terminates at 500 ft on my little 96C, but my way to get around that is to input a false target altitude. For instance, to fly an "ILS" to RWY 11 at my home airport (145 ft thr elev, DA 345 ft) is to input a target altitude of ÷155 ft MSL, which is 500 ft below DA. The GPS will then stop showing glideslope indication just as I reach DA, which is useful. I have a spreadsheet to calculate corresponding target distances - in this case the target distance should be 0,6 NM AFTER the ARP for the airport. The input for the calculation is just DA, gradient of the glidepath and distance from the touch-Down zone to the ARP. It obviously works only when the ARP is on the runway.

The glideslope "needle" on the 96C (the same as on 196/296 etc - I think) is less sensitive than a genuine ILS glidepath indication, which is one (more) reason not to trust this arrangement completely. But I use it successfully as a backup when flying ILS (mainly the check if it works), or in VMC to DIY approaches for VFR airfields I fly to regularly. 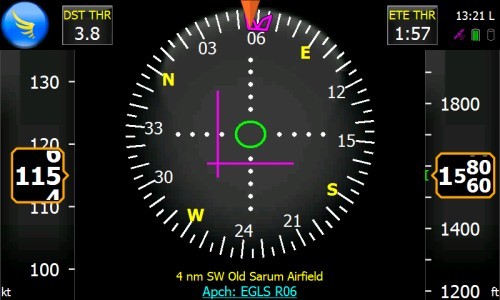 I've never tried it, but I was using the extended runway centerline function quite a lot when messing around VFR. While doing the IR training I learned I could achieve the same on the Garmin 430 using the OBS function. I now prefer to use the 430 for navigation, since it is much more reliable and accurate in compare to a tablet.

The Garmin 430 also offers vertical guidance; there's a page where you can set a target altitude, and the unit will then display the required vertical speed in the NAV and MAP page... You'll get a warning that GPS altitude should never be used for vertical navigation. But in an emergency this could be a lifesaver...

The problem with OBS mode is that it relates to the ARP does it not? I think the advantage of the new android app is it is coded to the TDZ. SD looks to also be coded that way.

Is that only if you have the bespoke SD physical device, i.e. you dont get this on the iPad?

And to add to the original post, while it looks good, I dont think I would have the confidence (or possibly the legal mandate) to use something non-certified in IMC to anything lower that 1000ft AGL, certainly not without even the most basic alternative such as a NDB/DME as well. This for me, goes on the list of relatively inexpensive things that are fun to download and play around with, but offer little practical use in normal flying as P1.

I think the first time there is a serious injury in one of the AAIB type reports pertaining to a pilot using a non-certified app to perform any kind of landing (assuming (s)he owns up to it), the whole "for VFR use only / for planning purposes only" will be assessed. That said, if the software vendor makes that claim as part of the terms and conditions of use, then its the responsibility of the pilot to make sure they make use of the right tools, including calling ATC on 121.50 and getting more traditional assistance if they really need it.

Yes, although I could see some value in flying a constant descent profile on an NDB/DME. monitoring the steps and using an app to get a more granular adjustment of the vertical profile.

Also at EGTK, I sometimes get a long straight in approach 8-10 mile final in VMC. Usually fly it on the NDB final approach course, but could be fun adding some vertical guidance particularly as it can make audio calls so you can keep a good lookout.

The Garmin 430 also offers vertical guidance; there's a page where you can set a target altitude, and the unit will then display the required vertical speed in the NAV and MAP page

That, however, is lateral nav (LNAV) only. You don't get any kind of GS indication.

What you seem to describe is what the G495 also gives you which is a constantly recomputed VS to reach the specified destination waypoint. Even the KLN94 has that - if one digs deep enough into the AUX pages... It is actually quite a nice feature, for when I can't be bothered to work it out in my head

I think the first time there is a serious injury in one of the AAIB type reports pertaining to a pilot using a non-certified app to perform any kind of landing (assuming (s)he owns up to it), the whole "for VFR use only / for planning purposes only" will be assessed

One might think that but there is no case law I know of, and people have been using unapproved nav devices for > 15 years, and loads have definitely crashed with them.

The problem with calling 121.50 is what can they do which you can't do if you can navigate without seeing the surface? I know this is a bit cynical but I think the main use of D&D goes back to the days (decades) when people (and particularly the sub-transport-level military) had no RNAV. If you can navigate and can fly an ILS (etc) then you can declare a mayday (which makes it legal to do this on a PPL, and will get you coordination) and just land somewhere. If you cannot fly in IMC then all D&D can do is look where the cloudbase is reasonable and help you to get there, and "suggest" that you descend, with their buttocks clenched so tight you wouldn't get a #1 Pozi in there

I think a "virtual ILS" is a really good thing to have which, like any battery powered device, might one day save your life.

Sure the OBS mode takes you to the middle of the airport, or some such point, so is of somewhat limited use for going really low, but is a whole lot better than nothing if you want to double-check your ILS setup.

But it also remains for me to succed getting my andriod to pair with the bluetooth gps receiver I use for the iPad (GNS 5870 MFI). It is probably me not trying hard enough, or cleverly enough. I might try again.

There is a lot of stuff on the web about people tearing their hair out trying to make an external GPS work on Android devices. It is possible though.

I can see why this product might require EGNOS but that narrows down the choice of an external GPS considerably.

Also IOS devices are totally incompatible with everything else out there when it comes to bluetooth GPSs. I never found a GPS which does both IOS and normal NMEA, concurrently. The XGPS150 I have is switchable, so if you want to run both an IOS device and a "normal" device in your plane, you need to buy two of them, configure their switches accordingly, and have two bluetooth streams available. I don't know why Apple did something so totally brain-dead; perhaps it is to do with their tight control of what bluetooth can be used for.

This android app, Fly Is Fun, about £13, can apparently do a virtual ILS, anywhere, any glideslope angle.

Peter
Administrator
Shoreham EGKA, United Kingdom
70 Posts
This thread is locked. This means you can't add a response.
Sign in to add your message