This was a ’democratic consultation`, organised by the government and sponsored by the monopoly railway company (I kid you not). They came up with 150 proposals to limit the effect of climate change. There is some interesting stuff (such as balancing NYMBYism and need to build wind farms), and some outright scary things (they wanted to put the protection of the climate AHEAD of the protection of people and their rights in the Constitution). President Macron has just said he would accept 147 of the proposals. Three proposals are directly targeted against aviation:

Most of the regional airports rely on external air links so I don’t think we could see closures in the medium terms, but the last item is a long term threat.

Agree, it will hurt. But it was unavoidable, and only a matter of time, for the most part.
Especially all those useless flights from Paris (Orly, mostly) to all those (small) capitals of the various départements, using Beech 1900 and such, were just crazy anachronisms.

Those were the flights that also gave us, as GA pilots:

You forgot the 50% tax increase For Avgas…

I am not sure about the sponsoring but what is clear is the experts that were supposed to inform these 150 of my co-citizen were not objective.

They wrote in the report that the aviation industry has “a moderate impact on greenhouse gas emission” and that Avas fuel is a “ strong carbon production Source” .


You forgot the 50% tax increase For Avgas…

I did miss it, thanks – from 45c to 68c per litre, to bring it in line with cars. How can we argue against that…

A rise from 45c to 68c per litre won’t make any difference to GA.

The ban on new airports is an empty gesture, since the chances of a new airport getting established anywhere in the European mainland, or in the UK, is approximately zero.

The problem might be in the long run, via the loss of commercial traffic even if it is sparse. Lots of people have for years had the view that the days of the “French chamber of commerce funded” airport, with negligible traffic, are numbered, as soon as the bean counters (the accountants) wake up. Let’s hope this isn’t the start of that process, because France has low private owner activity, and French aeroclub traffic mostly avoids these airports.

France could become a land of a huge number of grass strips – this map includes the numeric codes e.g. LF1454 but is not all of them 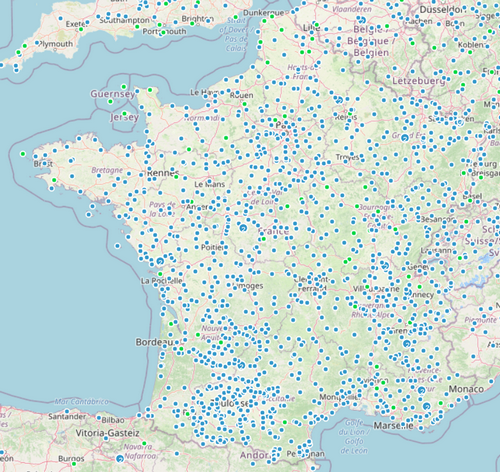 which are all FR-only, with a TOTAL self service pump, and no possibility of international traffic, and a few big airports charging Biarritz money (say €200). From the UK visitor POV that isn’t good (“customs clearing” airports, not a million miles from Paris, like Caen, will surely close now), but it isn’t good for schengen traffic either because of the FR-only (some big countries, which already rarely visit France, will simply not fly to France at all). And such a setup can also easily implode, given the low annual hours flown; one FI I know who has been working down there for years reckons it is pretty close already.

Does Le Touquet have any commercial traffic at all? It is fully self funding; no subsidy. And it works hard to look after its customers.

1) Doesn’t change much for GA (also due to 2)
2) Absolutely we should not use CAT if a convenient alternative is available. We need air travel – and especially GA – though for routes where train is not an alternative! I absolutely can’t understand why people should fly from Frankfurt to Paris if they have a meeting in the city center – it’s a 4 hr train ride with the direct train. Frankfurt-Reims (even though distance is smaller) can’t be done in less than 5 hrs – that’s there GA is superior. Also see comment below.
3) Where would we need additional airports? Despite a convenient GA airport for Munich (and perhaps another one in Berlin) it’s hard to think where we had a need.

From own, sad experience always wonder why a much more effective measure is never on such lists: Ban of all airline milage and customer loyalty programs! I’d estimate that more than half of domestic air travel in Germany is done by passengers that know that train is a convenient alternative but don’t want to loose they golden (or even black) card…


Where would we need additional airports?

I always have the long term hope, in the back of my mind, to build a runway somewhere next to my retirement home :-)

Where would we need additional airports?

This one has a background. This is to avoid a new “Notre Dame des Landes” catastrophe. If you are not familiar with the story here a very short (subjective) summary: in 1963 it was planed to replace Nantes airport by a new one… fast forward 55 years later: many demonstration against the project and a “no law” zone established in place of the future airport and the gov decides to cancel the project for good !!

@Peter you often write that France has low private owner activity. That does not reflect the reality of the situation. Firstly many French owners and there are quite a few have experimental, home built or collectors/ex military aircraft and orphans. I agree that probably most of these owners do not fly outside of French borders, but the reason for that is twofold.
The first and main one is the language barrier, many French pilots simply cannot be bothered to learn English and they can take a 4 hour flight and still remain in French airspace.
Others that do tend to go places go more for Morocco or Senegal where French can be used if need be
Even on small airfields, like LFFK, there are somewhere between 15 and 20 pilot owned aircraft hangered here. You can add to that about the same number again of pilot owned ULMs.
Perhaps the main difference of GA in France to other countries would be that here it is recognised as firmly in the sport/leisure/cultural camp, even though many owner pilots also use their aircraft regularly for business trips, instead of the car and have no problems claiming expenses from their employer or against tax.

I am repeating what French pilots tell me, but they won’t post it themselves, so next time I hear this I will send them to you for the appropriate corrective process

Peter
Administrator
Shoreham EGKA, United Kingdom
50 Posts
This thread is locked. This means you can't add a response.
Sign in to add your message