I am looking for an inexpensive solution to display the QNH on the ground, i.e. measure barometric pressure and perform an ISA altitude correction to derive the MSL pressure.

Are there weather stations that can do this?

There are numerous products for this, but I believe the traditional solution is to buy a shagged altimeter from US Ebay.

yes. My old ELV Station can do it, it is just a question to enter the correction factor into the pressure indication. I reckon most of the semi-professional stations can do it such as the Oregon Series and others.

Urs, what exactly is that correction factor? Is it a static correction, i.e. the height of the station over MSL or something that depends on the current atmosphere?

yes. Most weather stations have a possibility to enter a factor (described in the manual) which would then correct the indicated pressure from the outside sensor to the desired value. What they usually give you is the way to correct for local QFF, the standard pressure indication on synoptic charts. But it can of course be compensated for QNH as well.

I cheated. I live a few feet higher than Zurich airport but when I need to correct mine (every time I change the battery) I call my co workers at the observation post at LSZH and ask for the correct QNH (with decimals) and then correct my indicator until it corresponds. That of course means I have the ZRH QNH indicated on mine but that is the one which really interests me.

Another one I just remembered: Sitting on my desk is a simple barometer with a hPa scale. If you adujst that one to the local QNH once, it will also show you the proper value for the rest of it's useful life. And you only need to do it once. I calibrated mine about 20 years ago (by listening to the ATIS and turning the little screw in the back) and crosschecked it 2 mins ago, it is still spot on.

Mooney Driver
LSZH, Switzerland
what next
06

This one I couldn't forget... I had some time to spare (not really, but I simply took the time :-) ) and tried it out for myself: 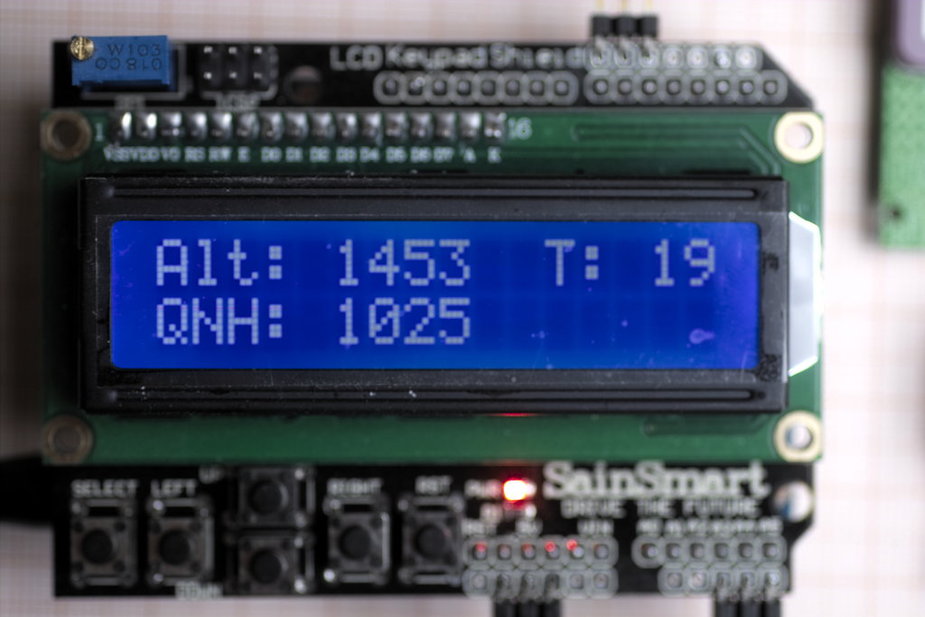 It is made from the parts shown here: 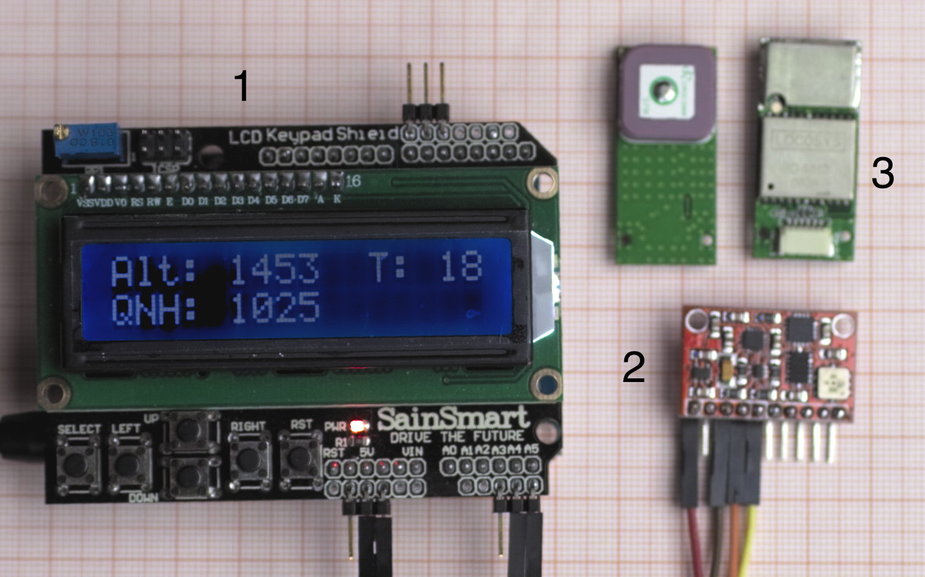 1) is an "Arduino" compatible ATMEGA328 microcontroller board with an attached LCD/Keypad "shield". This combination can be found on eBay for less than 20 Euros (new from a dealer), even cheaper if you order it directly in China/HongKong/Singapore.

3) is an optional GPS sensor. Actually two of them to show the integrated antenna on the back side. I can't connect it right now because I don't have the right connectors yet and it is too tiny for soldering with my soldering iron (I don't have SMD soldering equipment). 7 Euros each. I have more on order, better ones with higher update rate (10Hz vs. 1Hz of the units shown in the photo) for 5 Euros a piece.

Currently, the elevation is coded into the program, so it really only works at my home, but once the GPS sensor is connected, it will work everywhere. The temperature readout is a by-product of the barometric sensor (which resolves 0,03 hPa!) used for it's internal calibration. For the calculation I used the equation of ICAO from DOC 9837.

So to answer the original question: It can be done for less then 30 Euros. This little device could of course do a lot more than display QNH. With the QNH entered manually (there are some buttons below the display for that) it could serve as an altimeter. It also could be used as a vertical speed indicator or altitude alterter, the microcontroller has lots of unused pins to connect e.g. a loudspeaker for an acoustic indication. And with the GPS sensor it would provide position, speed, GPS altitude and exact time. And also magnetic heading and (short term) attitude and acceleration. All included in the price and requiring only a couple of lines of code :-)

To put together the very cheapest QNH indicator I can offer a selection of parts from my tinkerbox: 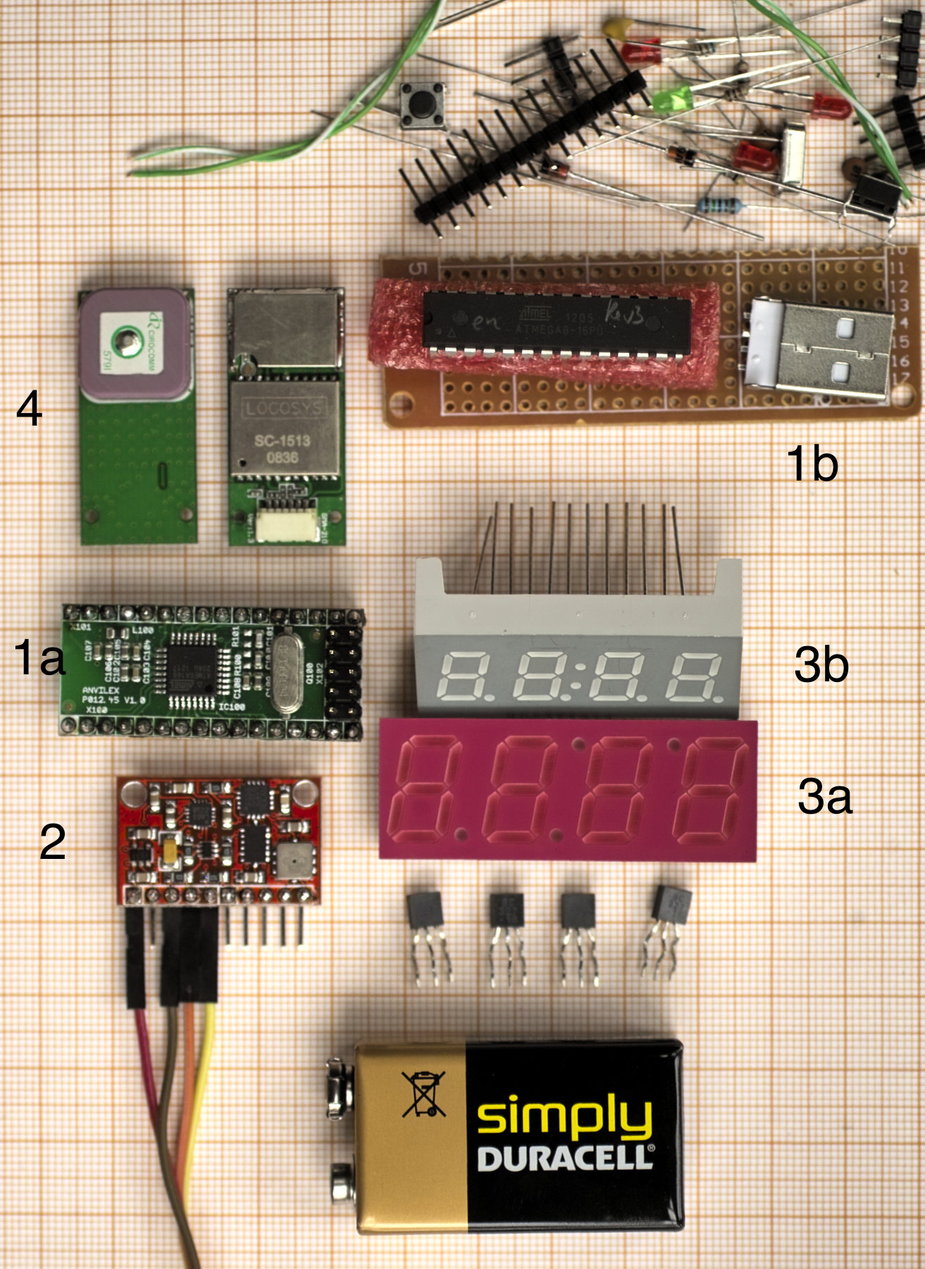 1a and 1b are low cost replacements for the "Arduino" board, 1a is a finished ATMEGA168 application board; 1b a solder-it-together-yourself ATMEGA238 board. Five Euros each.

2 is the digital altimeter plus extra sensors board again.

3a and 3b is a selection of four digit seven segment LED displays (less then 10 cents each) with four transistors, a number of resistors that will also be required is not shown.

I would probably use this combination ... 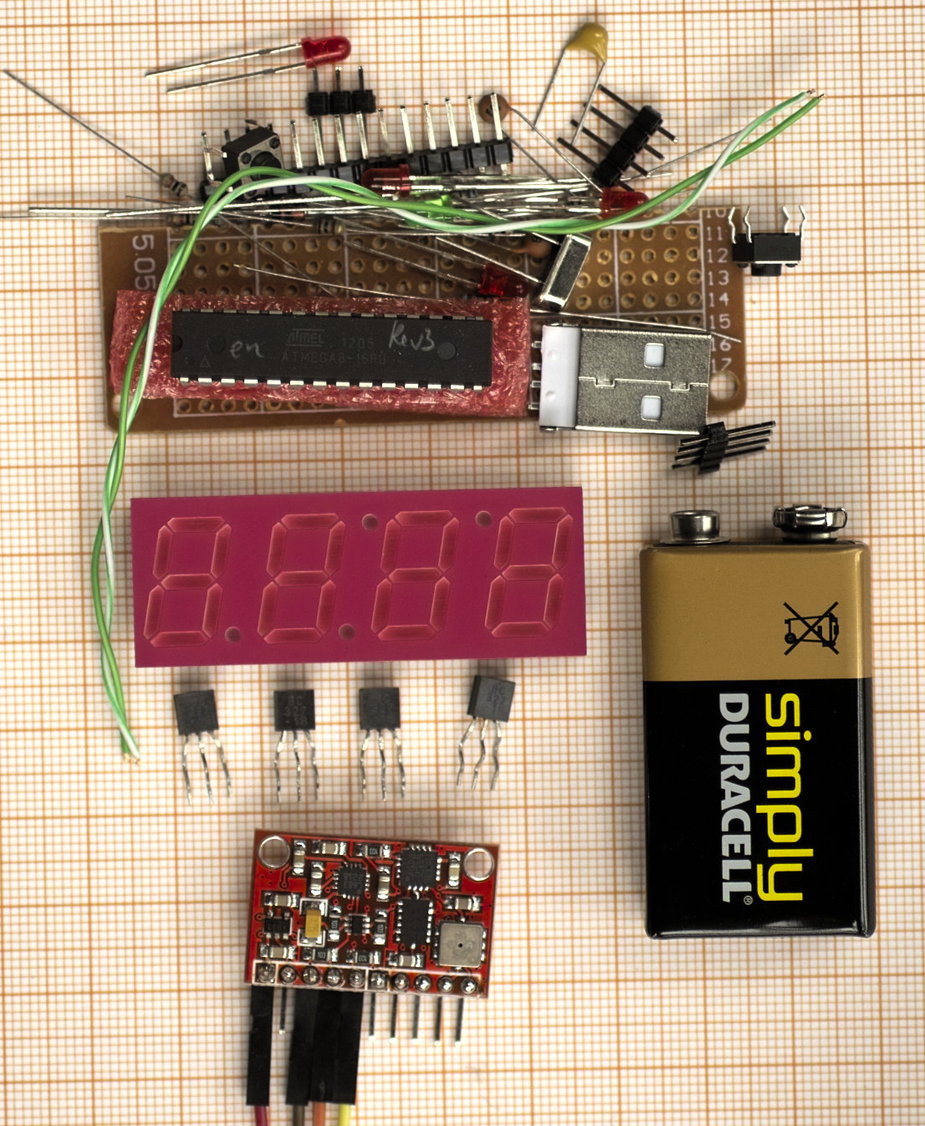 ... and stay within 15 Euros, including the battery but excluding a case and the on/off switch. Of course it would be pre-set to a given elevation, but it comes with a USB-connector for quick reprogramming.

what next
EDDS - Stuttgart
Jan Olieslagers
07

Great photography and storytelling, brought me a broad smile!

That reminds me - I was working on a microprocessor based weather station (my plans were to also add a webcam and a GPRS cellular module so it could be put near the windsock at Andreas airfield). I was using a MEMS temperature/pressure sensor whose name currently escapes me - I got the actual sensor from Sparkfun Electronics in the US. It was very sensitive, the datasheet claimed it could detect an altitude change of 13 cm. Deriving QNH/QFE was a matter of the processor doing simple sums once the data had been read off the sensor. (My intention was to also add a camera module and point it at North Barrule and upload a picture once every 30 minutes so you could also get an idea of cloud level and visibility). Unfortunately I just never got around to finishing it.

How are you programming the Atmel processor? C or assembler?

We will be moving to the ATmega128 when we get around to it... the prehistoric Hitachi H8s we use are being discontinued.

I take it those GPS receivers and accelerometers are from the model aeroplane world? My son plays with that all the time (and FPV).

However one thing which struck me about those electronics (on which he has spent thousands) is how unreliable they are. Almost all of it packs up within months. That could be his tinkering, however, and a lack of antistatic precautions. One just cannot throw bare PCBs around...

At work we use a Cinterion (formerly Siemens) MC55i GPRS modem for GSM connectivity. It has TCP/IP built in and you talk to it entirely using special AT commands. We have a product which can send SMS, email and - hey! - fax, all via this modem. Once you work around various quirks, especially to do with timing and timeouts, it's amazingly easy to achieve internet connectivity, without having to mess with any of the protocols. One could even implement FTP and HTTP servers, grab data from an FTP server, etc.

It'd be fun to have such a display on your property if you had a runway - to tell friends flying in, no knob twisting required!

What I do for airport ATIS or ASOS (including altimeter setting) is type in the airport code into Sky Vector (the internet site) on my phone and then put my thumb on the dot over the airport on the map. It's the first check to determine whether to get up early on a Sunday morning.

Silvaire
USA
27 Posts
This thread is locked. This means you can't add a response.
Sign in to add your message

Is this the lowest and highest pressure ever in/near Europe?
Flightradar 24 / FR24 - how exactly does it work?
How does ATC radar derive altitude from transponder altitude?
Random avionics internals