Is it possible to install avionics in this rack

… without having access to the sides of it from the outside 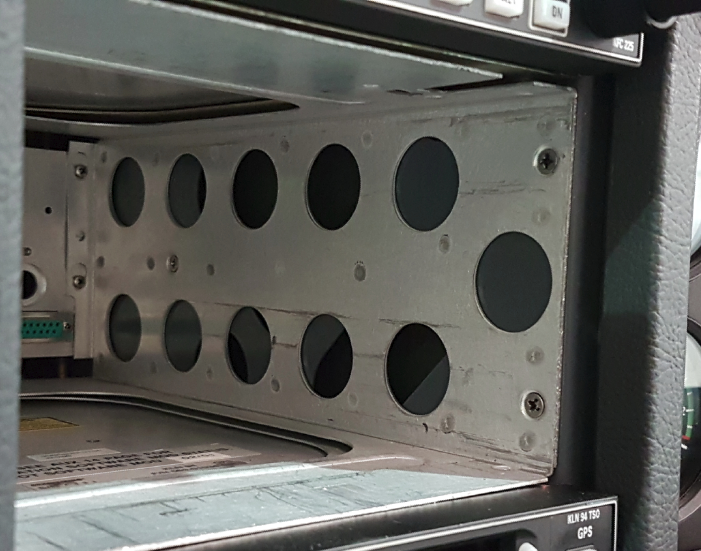 I am not sure if the screws which hold the trays have captive nuts, but regardless, they can be removed from inside.

Normally, the TB centre stack box is completely removed for any installations in it, but in this case this is difficult because various past installers have run wiring directly into it, not via the big circular connectos provided. 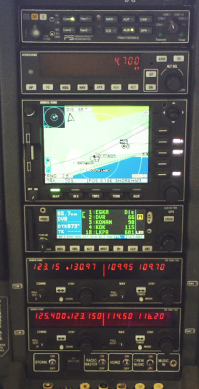 One can see the outside of the rack because the plastic surround comes off.

The wiring seems tricky but there will be a huge hole available once the existing trays are removed. So it looks like the connectors could be prewired OK. All the signals should be available because they go to the old radios, etc. The main issue I see is that Socata used cheap coax for the VHF and it radiates like hell and messes up GPS. I had to install the filters, as described here. That coax will need to be re-done in RG400.

Cheap coax is the enemy of clean signals and I never use it , Garmin required RG400 to comply with the GTN650/750 STC and in some situations an overbraid is required in electricity noisy aircraft.

It’s very difficult to say much more without seeing the aircraft but previous experience would have me speculate that once the rack is removed you will find a rats nest of old wires.

It’s not only cheap coax, the actual shield itself can radiate if you are using a balanced antenna (dipole) fed with coax without a balun.

Last week, for the isntallation of the new Aspen/L3 Lynx, my shop tried to remove the ADF and also the XPDR (below the right instrument panel) . The XPDR was a torture, I guess the French should still produce wine and should make cheese :) They put nuts to inaccessible places, even with the best tool, was impossible to raech it. Verdict: drilled out. The Central Consol was removed, but becasue the ADF was fixed in the rack on silly way, it was another torture. Finally it is out. Ready for rewireing. We keep the original structure, all cables will go via connectrors. Still in love with TB20GT @Peter: Your TB20?
Need an autopilot?
You wanted to see a <10k bill.
Could be yours.
The others I have NDAs.

Zsoszu – that’s exactly how it should be done

If the centre stack is wired correctly i.e. everything going via the connectors, it comes out in under an hour – assuming the avionics installer knows the procedure which nearly all of them don’t… one shop told me he hates Socata TBs, and the shop which did my TAS605 used the words “what do you expect – it’s a TB” when it was finally delivered with the CB panel not attached and the MD came down to force some random screws into the holes.

Unfortunately even Socata didn’t do it properly, running about 20 wires (including the 10 gray code ones) straight into it through a hole. I can see their reasoning: those wires can be de-attached from where they are doing instead (all of them go to the instruments in the LH panel) but that is awful. I think if I was going to extract the centre stack I would cut all those wires and put in a subminiature D connector in there; you can get milspec ones with preattached PTFE pigtails.

But I would prefer to do this installation with the stack left in place. If I was allowing several weeks for it (and corresponding £££) I would get all the unused KCS55 wiring removed, and perhaps rewire the whole plane from scratch. And face various issues which would arise on the first flight(s)…

The photos you posted are very interesting. They show what I should find in the cavity.

Dejwu – I have no idea what you mean. Which avionics shop do you work for?

I have an AP. The two GPS boxes would cost about 30k.

The shop is the Central Eu Avionics, run by my friend. We can work together, however I am just an enthusiastic “pilot”, with some knowledge. He is nice profesional AP, with Aspen, Garmin, Bendix and Avidyne knowlegde and training. We were hasitating, if we could bring the wires oout of the connectors, but since KCS is removed there are many cables to remove. He plans the wireing, and we (actually he) will rewire the connectors. He installed a dual Aspen and the Wx500 into my OYNAY SN/578, and it worked professionally from the first time we switched on. Good guy. I work only with him.

Zsoszu
Zsolt Szüle
LHTL, Hungary
9 Posts
This thread is locked. This means you can't add a response.
Sign in to add your message