I thought I would post this on here as others who are not PPLIR members may be interested.

I bought last week an ADL120 datalink to use in the Meridian. This is the product which has a box that operates as a WiFi hub - the data is downloaded to an iPad which is the interface to the system.

The box uses a glareshield mounted antenna to communicate with the Iridium network and provide a GPS location to the iPad. It accepts a DC feed with flexible voltage ranges (I have it plugged into a 110 volt transformer). As stated above, the link to the iPad is wireless. I sat the unit behind the copilot. I plan to site it in a more permanent temporary fitting soon.

On my first trip back from Berlin there were a few software problems. Essentially I was one of the first people to use the software properly in anger. The hardware is established but the iPad software is quite new. Upon landing, I let Sebastian know some of the problems and by 9am the next morning he had uploaded a new version of the software which completely fixed them. They were really related to application switching while a download was taking place leading to some data loss. I have to say he has subsequently been very responsive to suggestions or small bugs I have found.

So first point has to be that there was great service from him - he seems a really nice guy who has worked very hard to make a good product. The iPad version is in my view a great way to do downlink weather. No need for a fixed antenna, no need for FAA/EASA approval unless you want to hardwire. And it is vastly cheaper than the Avidyne or Garmin options.

The device does four things:

The radar data can cover an entire flightplan, current position or destination. For the flightplan you have a choice of high or low res data. High is 2x2nm squares per pixel and Low is 4x4. The colour of the pixel is the worst colour in the sampled radar image ie if there is any red, the whole pixel will be red. While the radar data is a little blocky and probably not suitable for tactical avoidance but then I never found the MLX to be good for that given unclear data delays. The goal of limiting resolution is of course to lower data costs.

You can see here that I have set up to download a low quality radar and strike view of my route as well as the LSGG metar. 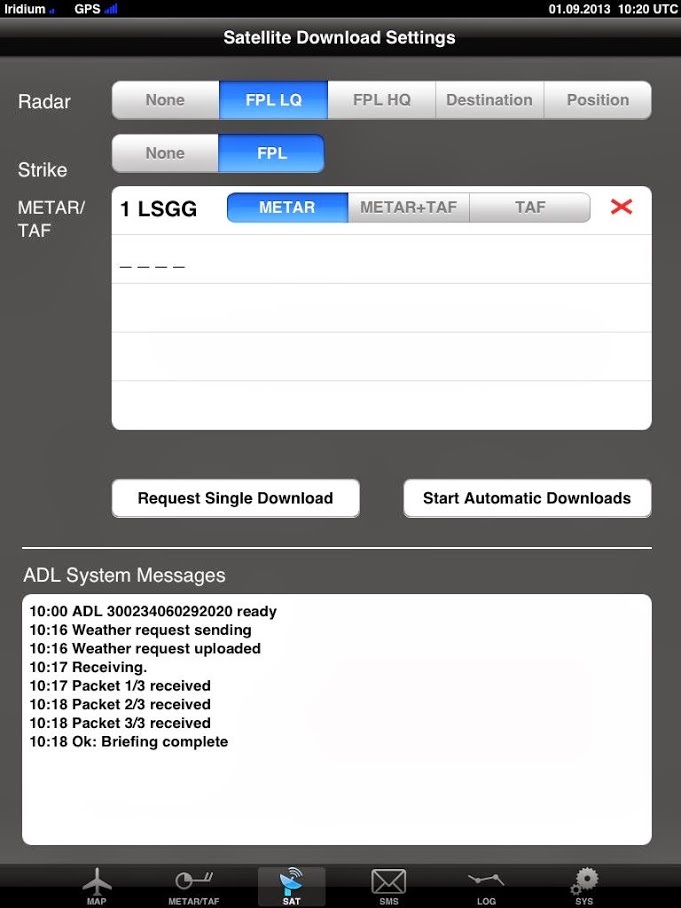 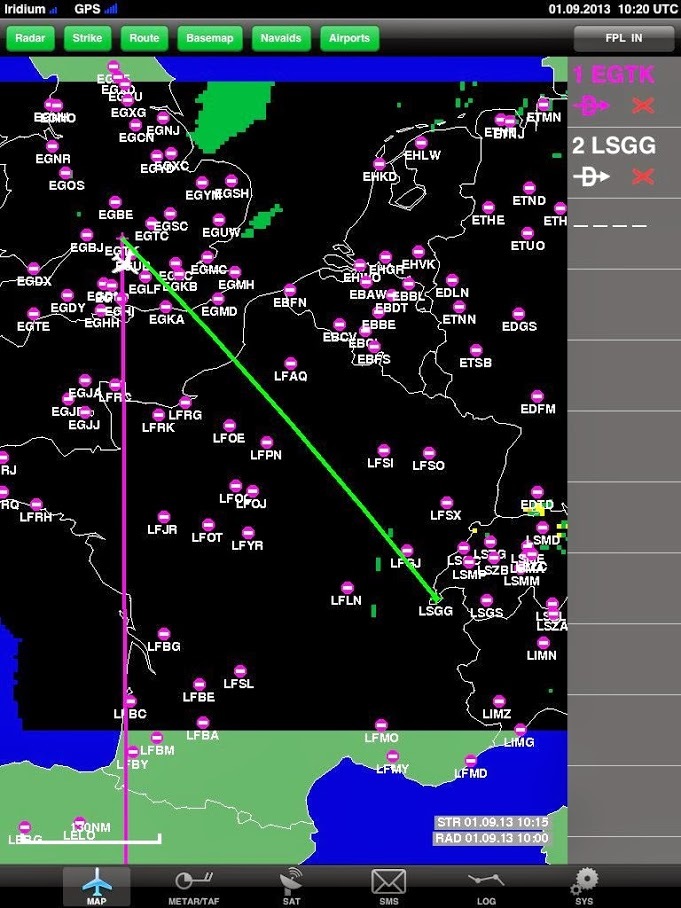 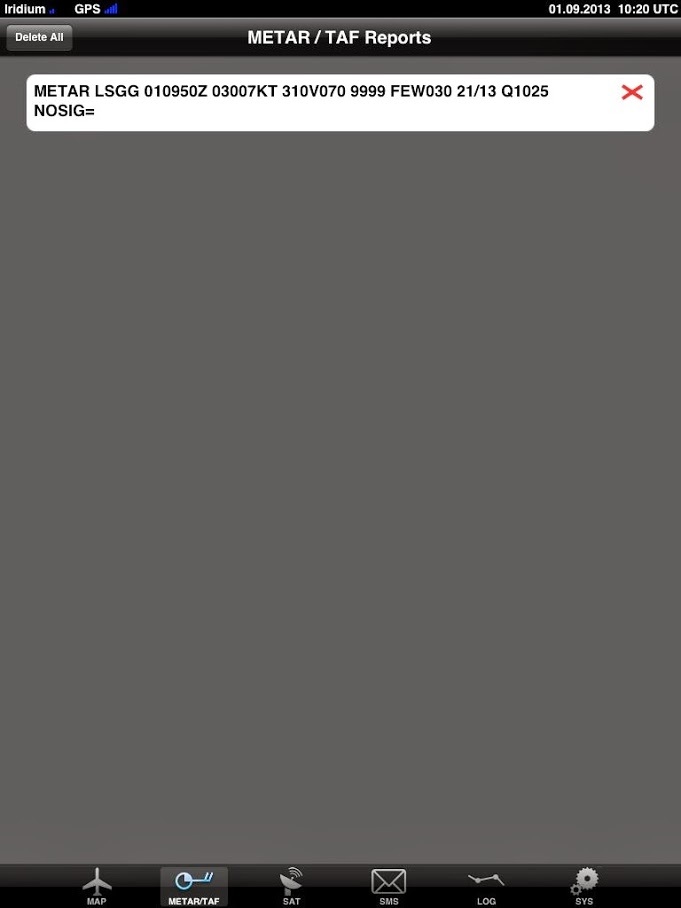 Later on in the flight I updated the radar with just a view of Geneva vicinity which always loads as a high quality file. 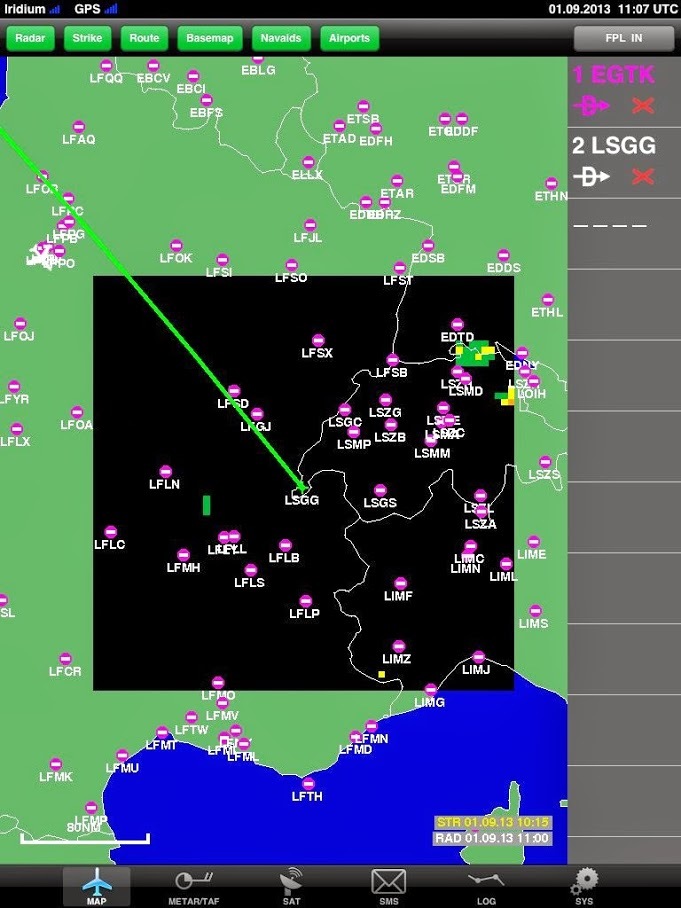 The first download was 3 data packets. The second only 1.

You can see the radar images are timestamped and hence you can easily see how current they are.

For me it is exactly what I need. I have airborne weather radar which I would use for any tactical avoidance. I can get a good (and current) update of the general picture, get METARs and text my family/work to provide or receive updates. The graphics aren't beautiful, but I don't care. The prettier they are the more data you use. So early days but I would recommend based on about 6 hours inflight use so far.

The biggest difference from the MLX is that it isn't integrated. This does however allow for substantial and easily delivered upgrades - I have asked for sat IR data for example. It also does allow me to control the data which was far harder on the MLX (essentially it always updated) which was convenient but can be expensive.

I'm hoping there will be an Android app.

Are you planning to connect it to your G1000? The ADL can receive flight plans from the GNS navigators but I don't know if it also work with the GTN and G1000.

It can do a FPL link to G1000 but it really isn't needed but the FPL download area is so large, you just do start - destination. I am not using it for navigation.

In case it is of interest to anyone here, I gather the price is €500 lower until the end of this week. ie €1950+VAT. For the avoidance of doubt I have no interest in this other than having bought one.

That is a very good report Jason.

I take it the system can be installed entirely out of sight, for those who have no instrument panel space?

They also do not appear to show the antenna used.

Peter, yes. The antenna is about 3cm square and sits on the glareshield. I had good reception 3-5 bars out of 5 for the entire trip. Everything else can be out of sight. I too would not put in panel.

I've got one on order with the remote screen.

Any tips on how to sign up for the German met? (Don't speak German!)

You need to order this and it asks what service you want to use it with and you say other. You pay for it then they send you a pdf with two sets of passwords all of which are needed for the ADL120.

Thanks for that - having trouble paying now, but I'm sure I'll get there!

denopa
EGTF, LFTF
513 Posts
This thread is locked. This means you can't add a response.
Sign in to add your message

Online Weather WX Radar Sources
Flying in IMC with a stormscope and no radar
Ground based weather radar at its best
Portable In-Cockpit Weather in Europe for iPad?