I have been looking at these, following a tip from another pilot who is flying with this Sequal one 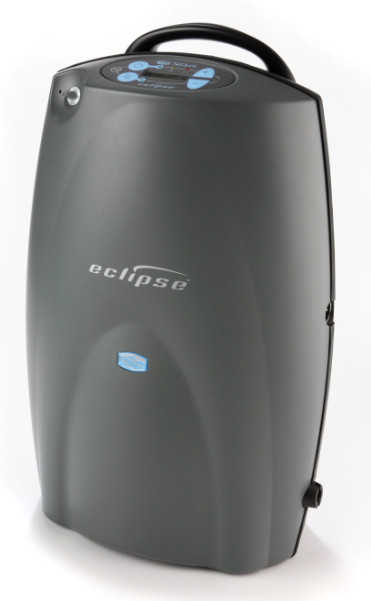 That one does 3 litres/minute continuous which IAW FAA 23.1447 is enough for 2 people at 15000ft, using constant flow plain cannulas.

But nobody uses plain cannulas in aviation. People use either oxymiser cannulas (a 2x saving) or some sort of demand regulator and the MH O2D2 is the leader by far there and will produce a 4x saving over a plain cannula.

The Sequal one has just (yesterday) been tested at FL200, for a single person use, and he was getting 90% blood o2 with a cannula, which is damn good going. I believe he used a constant flow oximiser cannula.

The unit also contains a demand reg but obviously, given the single outlet, that will work with one person only. The only point of using that mode is to save power, which is relevant only if running off the built-in battery. It's damn heavy though, at about 10kg.

Another one is from Inogen 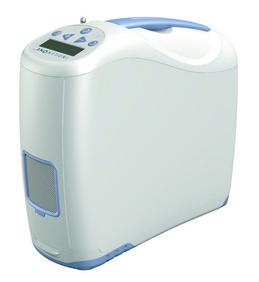 which (interpolating the spec) does just under 1 litre/minute, but is much lighter. It claims to work to 17500ft.

Both of the above cost around $2k.

These products seem to work by pumping the air through a tube filled with zeolite granules. That absorbs most of the nitrogen. It saturates in seconds, so the air is switched to a second tube, leaving the first one to vent to the open air. Then you can go back to the first one. I don't know how many tubes they have in total but these pictures suggest it is more than just two. The result is 90% oxygen - compared with 21% normally.

One interesting question is what output pressure is achieved at FL200 (or FL180 if you like). To make a 1L/min unit usable by 3 people, one would use the O2D2 demand reg, but the O2D2 needs about 20psi input pressure for the correct dosage. Obviously with a cylinder this is trivial to achieve, but this oxygen generator is starting with 15psi on the surface, reducing to about 7psi at FL180. I have not found any data on it, and I am not about to buy one for $2k to test it...

Mountain High tell me that their O2D2 needs 18psi and the o2 source needs to be able to deliver 38 litres/minute for the duration of the pulse. I have a feeling that none of these generators have enough internal volume to do that, even if they have enough output pressure.

There is a pile of these things on the market, Chinese mostly, down to $300, but from what I hear they work only up to airliner cabin altitudes (8500ft) so would be no good for GA.

this looks really nice. Especially the Inogen. What I failed to understand: is it or is it not possible to power this thing through the aircraft's (24V) convenience outlet?

is it or is it not possible to power this thing through the aircraft's (24V) convenience outlet?

The Inogen one seems to be 12V only so you would need a converter.

The Sequal one says 12V too, but according to the pilot who tested it, there is some way to do 24V. Perhaps it comes with a converter.

Inogen is really interessting, but I´t doesn´t look´s that you can use 02D2 and this product :-( Good would be a 2 or 4 person Inogen unit?

Not sure if I'm missing something here - but why not just use a plain cannula? AIUI, the purpose of the demand regulators etc is to minimise use of the oxygen supply, to reduce the requirement for refills (and all the consequent operational difficulties). If you're continually producing your own O2 supply, does it matter if some overflows into the cabin?

Not sure if I'm missing something here - but why not just use a plain cannula? AIUI, the purpose of the demand regulators etc is to minimise use of the oxygen supply, to reduce the requirement for refills (and all the consequent operational difficulties). If you're continually producing your own O2 supply, does it matter if some overflows into the cabin?

Quite so, but I don't think even the 3L/min version is enough for 4 people at FL200, which is the sort of capability one would be after. So one has to stretch it out somehow.

There is no issue if you fly alone. But these things are not cheap or small or light and you don't want 3 or 4 of them

Just got this but going out so will read it later.

2k is too much. I can buy many big cylinders for that.

It is not so much about price. It's about being independent from the very unreliable supply of O2 at airfields across Europe. Not everybody has a huge (and heavy) O2 bottle installation in his aircraft which allows you to fill it up only twice a year (when the aircraft is at your home shop for maintenance anyway). Also, the "home shop" of some of us may not have O2 in the first place.

Maybe in a few years, these units will be a little smaller, a little lighter, a little more powerful and a little less expensive. Combine this device with Oxyarms and nobody will want pressurization in his piston aircraft any longer...

A 48 cu ft bottle and the do it yourself refilling equipment is still a lot cheaper and most likely much more reliable than one of these oxygen generators. I have a built-in 48 cu ft bottle and O2D2 and the supply lasts for a very long time. The 200l oxygen bottle for refills costs ca. 60 € a year. Doing the refill is very easy, just requires some thinking which valve to open when. If in addition you don't smoke during the process and let the gas flow very slowly to prevent overheating, it's a very safe procedure.

Professional oxygen generators cost a lot more and use a different principle (basically the same as the oxygen plants): Oxyfly

Looking at the Oxyfly (which I have seen around for a couple of years) it doesn't look any different in the way it works, other than

The way it is described, the o2 purity of ~90%, and the awesome power consumption all correspond to e.g. the Sequal product which definitely uses zeolite to absorb the nitrogen. I don't think there is any other way to make o2 continuously, which you could package in a small box.

Oxyfly is certainly not cryogenic otherwise they would be claiming 99.99% o2 purity, which is what you get in the bottled gas (welding, food fresh, medical, aviation, all these are the same gas and the same production method).

Whereas all the other units are marketed into the medical business where people need o2 because they can't breathe properly. Some just happen to work at altitude. I have a chance to buy one unopened ex-mil Sequal II generator, Ebay i.e. no warranty, for £1250, which has been tested to FL200, but I don't really need it because I have the supply so well sorted.

Testing a few might be an idea. How does it cost to rent a decompression chamber for an hour or two?

One thing which concerned me is that the zeolite generators will apparently let moisture through, and an O2D2 may not appreciate that. Especially as removing say 70% of the gas (most of the nitrogen) will concentrate all the water into the oxygen you are breathing.

ISTM that the Sequal 3L/min generator would drive three oximiser cannulas at FL180 OK. That's a good solution, and you save an awful lot of money on equipment:

OTOH the generator or the power supply could fail so you still need a cylinder as a backup...

Sure handling o2 from a cylinder is easy, and cheap once you set it all up, and I've been doing it for years and have no problems. But you definitely need to be an "engineer" type to do it safely. Many pilots I know, especially those flying more modern hardware, are not in that category. These are the same people who drop their plane off at the dealer, keys and a signed blank cheque on the seat. They would far prefer a "box" which just works and which can't "blow up". At 3000psi, if you cross-thread a fitting and open up the valve, the departing piece will probably be doing mach1.

Peter
Administrator
Shoreham EGKA, United Kingdom
89 Posts
This thread is locked. This means you can't add a response.
Sign in to add your message