It looks to me like Kirkwall EGPA (in the Orkneys) will be the third UK airport with an LPV approach. An advanced copy of the approach chart has been published in the UK AIP 56 day advanced amendment notice, for introduction on 21 July.

It raises a few questions in my mind. I’d overflown the airport earlier this month, and the topology is pretty flat (to the west) with only the Island of Hoy some distance the east having significant hills. Restricted airspace lies further east.

The airport already has ILS and VOR approaches. The ILS for 27 has a glide path of 3.5 degrees and OCH of 176 feet. Missed approach uses the co-located VOR/DME (although the NDB can also be used). Localiser only OCH is 341 feet. VOR/DME OCH is 391. VOR only OCH is 641 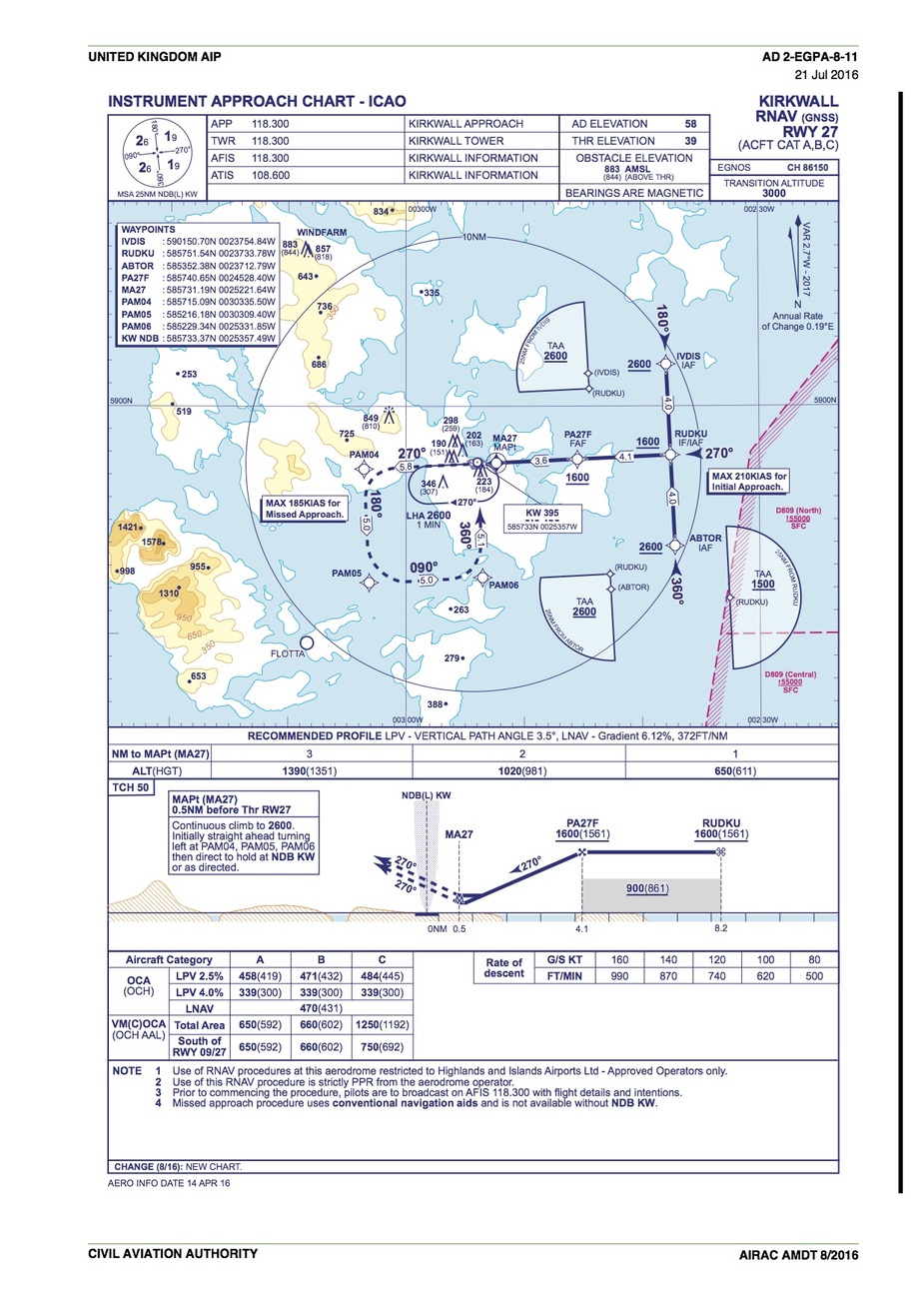 The final approach fix/start of descent is 5 miles for the ILS but only 4.1 for the RNAV.

There are several restrictions:
a) Approved Operators Only
b) PPR
c) Broadcast intentions by AFIS on radio prior to commencing procedure
d) Missed approach mandates NDB

1) Why such a late final approach fix compared to the existing ILS glidepath? I suspect this is due to the restricted area to the east, which mean squeezing in the initial approach fixes further west than ideal. Shame there isn’t a workaround for that, such as a lower altitude for the final approach fix (I guess its not allowed to have anything other than level flight between RUDKU and PA27F.)

2) I was initially confused by the two different glideslopes listed for the LPV. I think the 2.5% glideslope just means you have to lose 419 feet int he last 0.5 mile to land rather than 300 feet, so you’ll have a pretty steep short final (and higher minima).

3) Will these two descent rates/minima lead to two separate Jeppesen plates or just be an annotation?

4) Will the late FAF and steep descent mean that the 300 feet OCH is unlikely to be enhanced in the future? This is almost double what the ILS is achieving.

5) This will be the first UK airport to have an LPV approach manned by an AFIS rather than full ATC (Lands End being the other RNAV AFIS, but as yet only LNAV). It is disappointing to see such demanding restrictions applied – PPR, Approved Operators Only, NDB mandatory even when the ILS doesn’t require one. If this is the trend being applied/mandated by UK CAA, the prognosis for LPV and RNAV approaches in the UK is dire.


1) Why such a late final approach fix compared to the existing ILS glidepath?

I vaguely remember 5 NM to be the minimum for ILS approaches – and in fact, for ILS it’s a FAP rather than a FAF. Conversely, for LPV or even GPS LNAV, it’s a true FAF and the automatic waypoint sequencing makes glidepath entry more straightforward.

I would assume the % relates to the missed approach climb gradient as the glideslope would be described in degrees and the conversion means those glidepaths are too shallow to make sense. If you can climb more steeply you can go lower. It isn’t clear though. Trust the UK to make even LPVs confusing.

The percentages will relate to Missed Approach Climb Gradient.

It’s quite common to have different minima dependent on that; for example the one I know well is the ILS04 at Annecy

The biggest disappointment is that the approach is not available without an ADF, as the NDB KW is part of the missed approach procedure.

Neil, while Annecy has the similar system, the French govt plate is clear that there is a basic approach with a minima for each class of aircraft. Then it publishes special minima for aircraft that can exceed the 2.5% MACG. The UK plate is terribly drafted with none of that explanation.

As you say, the other aspect is the NDB. Fortunately of course GPS units can fly to the GPS coordinates that are colocated with an NDB.

There is a huge slice of opinion on this forum that GPS is infallible and that the only reason you will go around will be as a result of weather or a blocked runway……………… Well guys what you going to do in the event of a failure of the part of the GPS that lives in orbit ? Or your single LVP GPS box ? Or a simple loss of RAIM ?

Your go around navigation has to be based on something and GPS has left the building so we need a good cheap alternative and a NDB is the answer to this requirement and of course all IFR aircraft have has one fitted for years and you all know how to use it.

May be things would have been different if you guys had understood and fitted Narco’s STARNAV multi sensor RNAV system but Oh no ! We all rush to put all the eggs in one GPS basket and an RNAV Unit that could use VOR/DME, GPS & LORAN to give you an IFR navigation solution was consigned to a historical footnote.

Number of accidents related to failure of GPS (device or system) – during approach: zero. After more than a decade of GPS only approaches.

The day GPS fails – for example because of a major solar flare knocking out the system – will be a dark day not only in aviation. Large aircraft have INS and DME/DME fallback, smaller stuff will have to rely on the few VORs left, DR, and radar.

But in this instance – when the GPS goes dark, go around roughly straight ahead to 500ft, turn left. Everything will be fine.

I wouldn’t have a problem with the procedure involving an ADF if it were legal to use the GPS instead, then each individual can have one in their aircraft or not, based on personal risk appetite.

Nowhere in the world are NDBs used for defining th missed approach on RNAV approaches. Only in the UK. It clearly is UK CAA / NATS dogmatics and little else.


As you say, the other aspect is the NDB. Fortunately of course GPS units can fly to the GPS coordinates that are colocated with an NDB.

I doubt the CAA would endorse such a practice. I know DGAC doesn’t (or at least didn’t, substitution was allowed only en-route and IIRC they were explicit in respect to NDB based missed approaches leaving no room for “you’re legal as long as you don’t actually use that missed approach” interpretation).

Martin
122 Posts
This thread is locked. This means you can't add a response.
Sign in to add your message

Any reason NOT to remove an ADF than has gone u/s?
UK CAA heel dragging on GPS approaches, including LPV (merged)
Where do you go to practice your IFR Approaches?
Glidepath on 2D approaches