after a nice lunch in the canteen of the Cambridge aeroclub some confusion arose when filling in the aircraft flight log (noted in local times), the times just wouldn’t match. it was then i realized that we had flown to a different timezone and the mobile had automatically switched the time. there’s a first for everything :) had i flown with an airline, the time zone change would have been more natural to come to.

before departure the EGSC desk inquired about the GAR form for our earlier arrival. i forwarded them the email generated by autorouter and they called Stansted airport (?) for confirmation, which was given. all in order.

PPR for EGPE was obtained 48h prior by phone, which is required for “self-handling”, i.e. no overpriced handling company. a PPR number was provided, without the need to mention in the flight plan. very friendly on the phone. 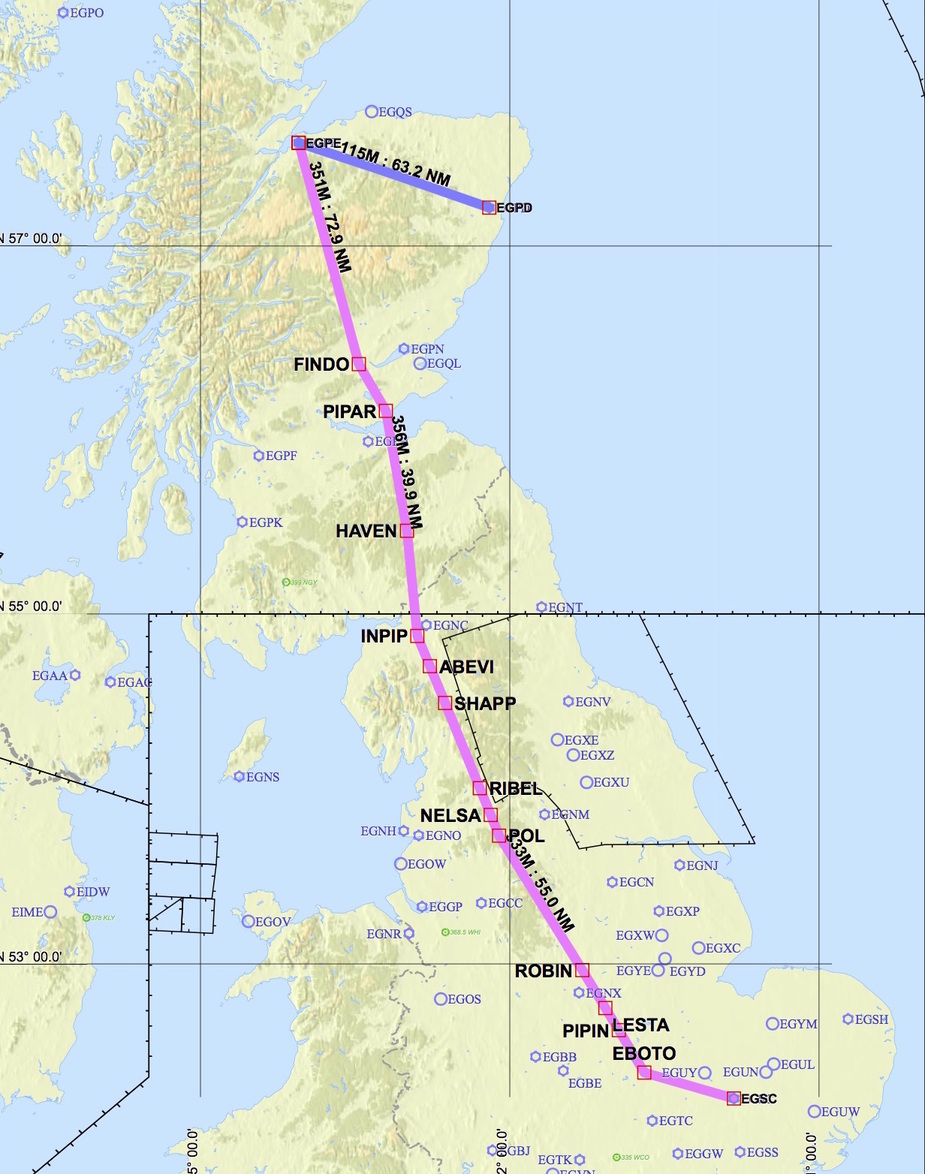 the weather forecast similar to the one in part 1. the GRAMET cross section predicted some clouds over the highlands, corresponding the the EGPE METAR, scattered with bases around 4000 ft. it also featured one of those strange vertical artifacts that i have never seen in reality:

most importantly, the front from the west had moved somewhat to the east, with bands of cold and high tops visible across the intended route and a cold mass just over the Inverness area: 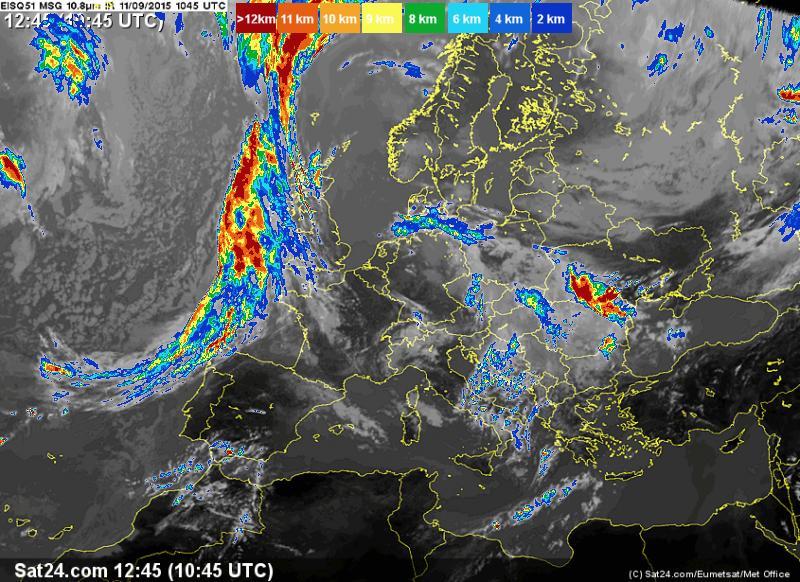 i concluded that these were thin high-altitude cirri, for the following reasons:

as such we boarded. as there’s no towered airport in uncontrolled airspace in the countries i fly, i was wondering how that impacts the phraseology for an IFR departure. i decided to stick with the phraseology i know and as usual requested “startup and clearance”. i always do this on the hand-radio in order not to waste any battery before engine start, and to have a calm environment for noting the clearance, sorting through the charts after the departure route is known. startup was given immediately, the clearance was announced for later when taxiing. as such it was engine start, and program the GNS430 with an assumed departure direct first enroute waypoint.

taxi clearance was to RWY 05, intersection B. at first i found this confusing, as B is close to the threshold RWY 23. i should have studied the taxi chart better, as i makes sense: there’s no easy taxi route to D, and C is very close to B, so B and a subsequent backtrack is the best option from the GA grass parking. while taxing the clearance was offered, which i only accepted while stationary, after finishing the power checks. the clearance was simple: after departure turn left direct EBOTO, climb 5000 ft, no re-programming required.

while taxiing for RWY 05 we saw this unmarked beast (note the different prop angles): 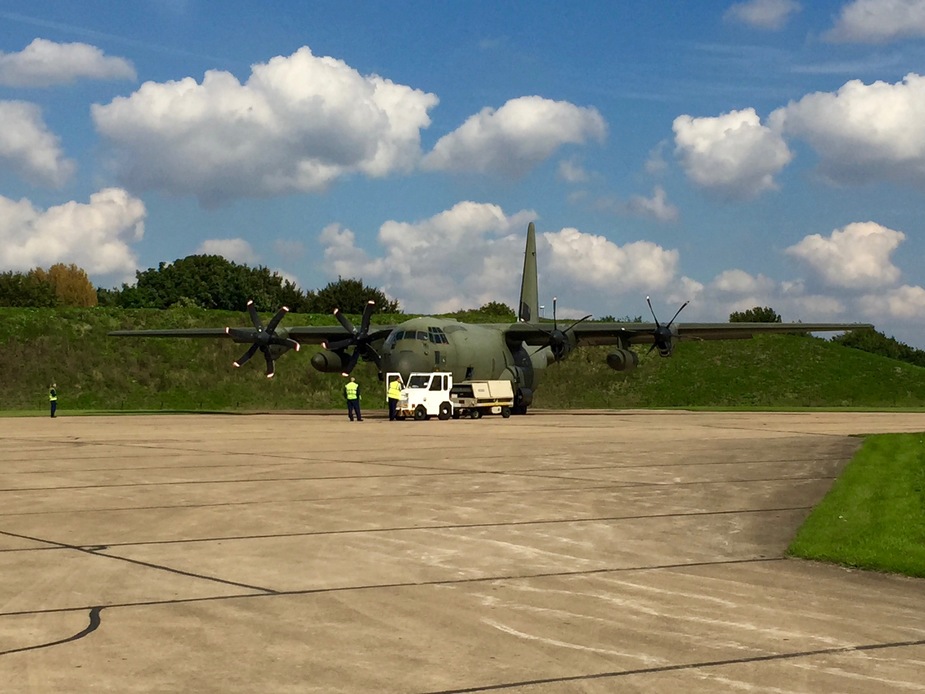 the departure briefing included how to navigate VFR OCAS until and if obtaining clearance to join CAS. basically no problem, with a maximum climb to FL90 and generally staying to the north to avoid the London TMA:

minutes after departure, in contrast to my fears, i was released to london control and immediately and without asking received a “cleared to enter CAS at EBOTO, climb FL160”. on this and all other legs in the UK i encountered a watchful, friendly, service-oriented ATC and none of the horror stories i heard came true.

i requested a stop climb at FL140 which we reached 24 minutes after departure and established on a 65% cruise @ 125 kts IAS, peak leaning.

and here are the cirri visible on the “tops” image beforehand; this weather remained for the whole route: 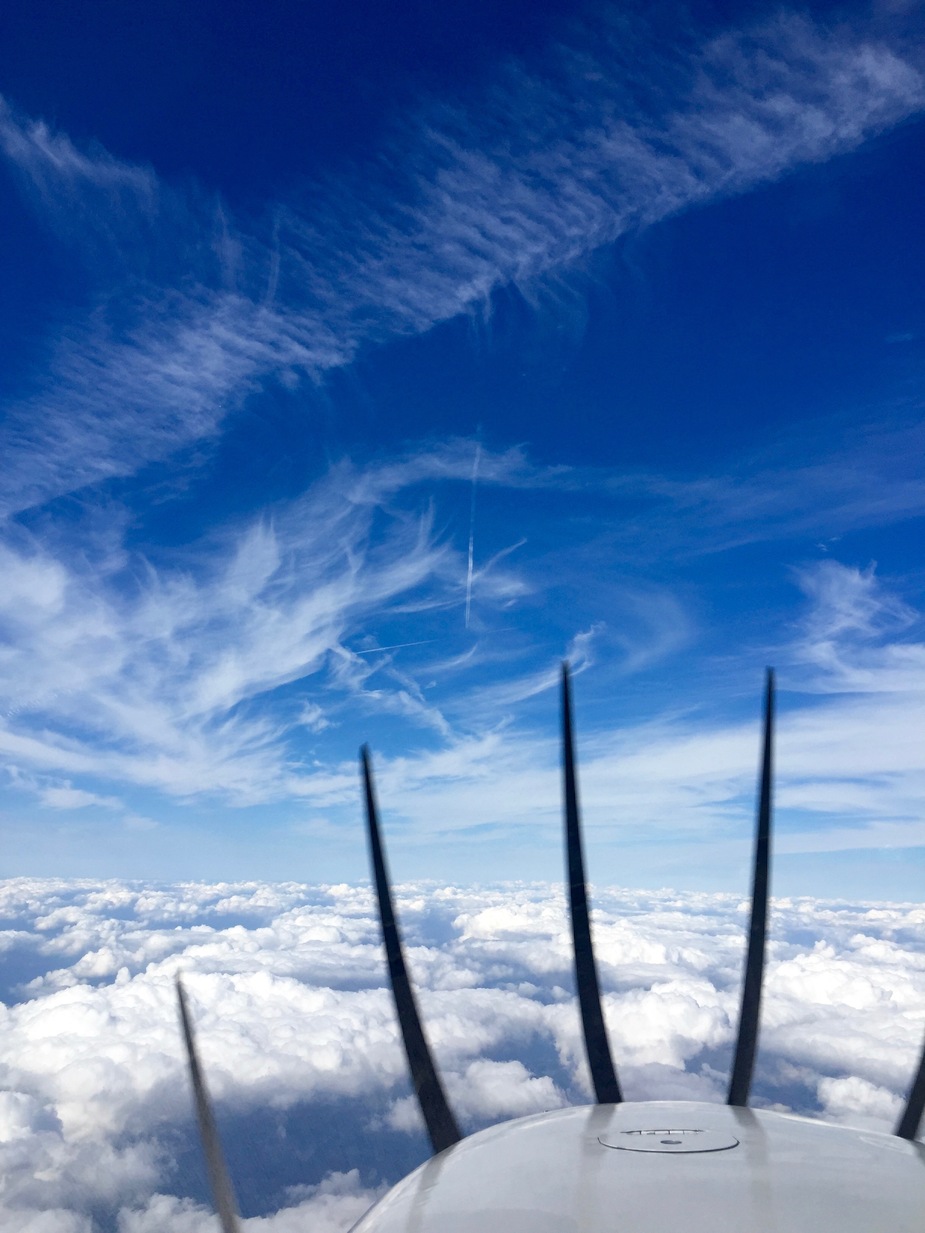 so far we had flown exactly the flight planned route. exactly where autorouter started working with DCTs, we were re-routed by ATC. at INPIP we were put on radar headings (“continue present heading”) which lasted for the next ~100 NM, with slight vectoring in the scottish TMA probably due other traffic. abeam Glasgow we were given a DCT FOYLE which marked the boundary of CAS. exiting CAS was clearly announced and traffic service provided. 20NM later we entered one of those rare class E corridors to Inverness. it also put us on the radial for the Inverness initial approach to RWY 05 with FOLYE being on R192 INS: 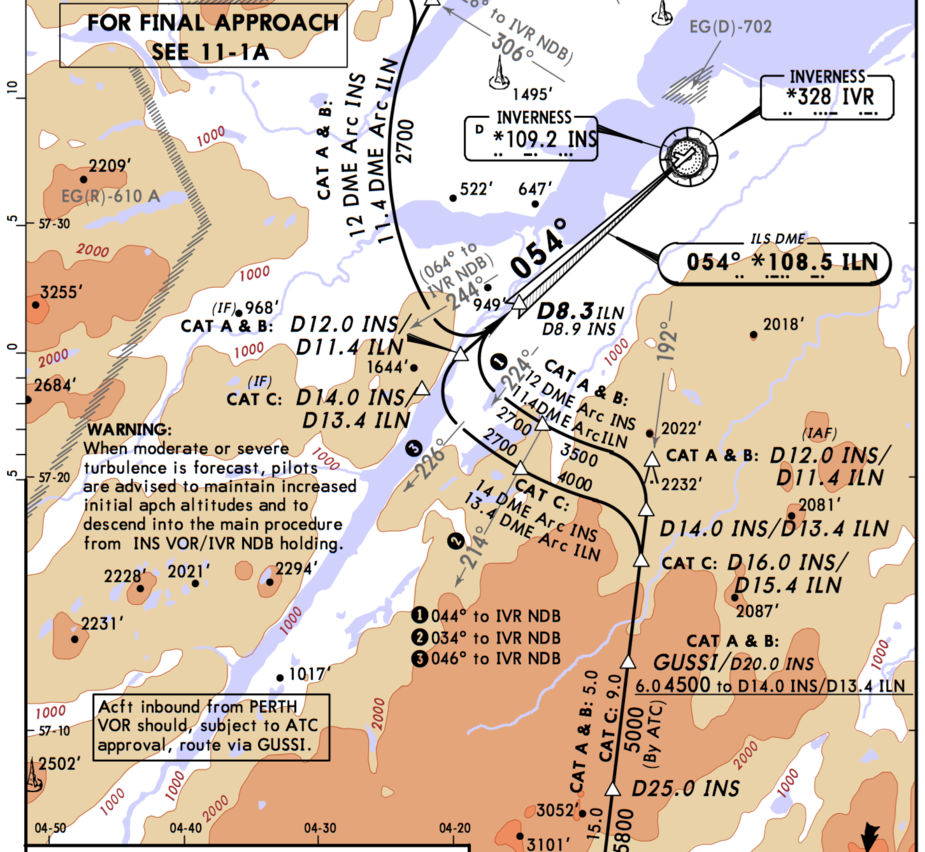 the highlands were obscured by cloud, with only the occasional glimpse of a valley or loch. it was also clear that we were closer to the front with the higher clouds thickening: 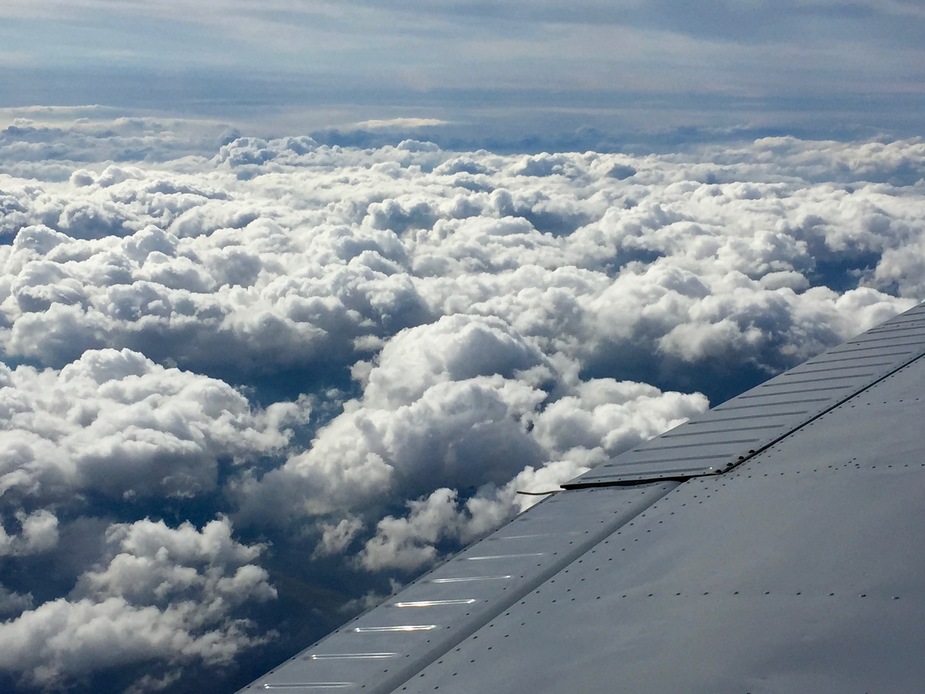 the winds were picking up which made sense due to the strong pressure gradient towards the front. at about 45 track miles we were starting to be vectored for RWY 23, later a descent was given to 7000 ft. with the mountainous terrain below and the BKN CU clouds i was expecting turbulence. and sure enough it came, before entering the cloud tops at 8000 ft, to a degree where i decided to request a level off at FL90 until over the coast-line where descent through a clearing between the clouds would be the safest and most comfortable option. ATC was very accommodating.

on the downwind for the ILS the desired clearing appeared: 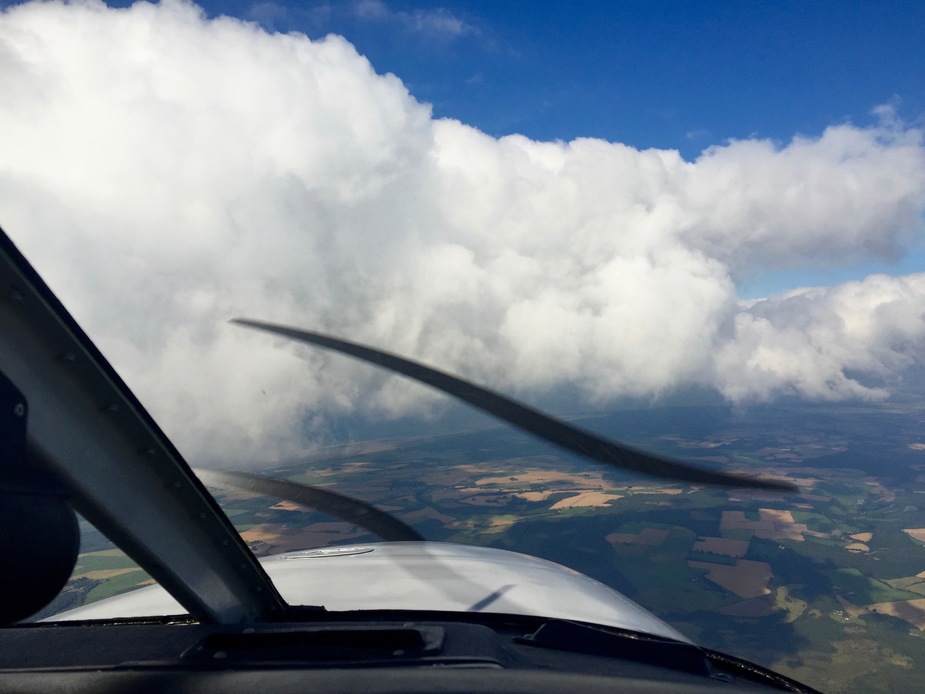 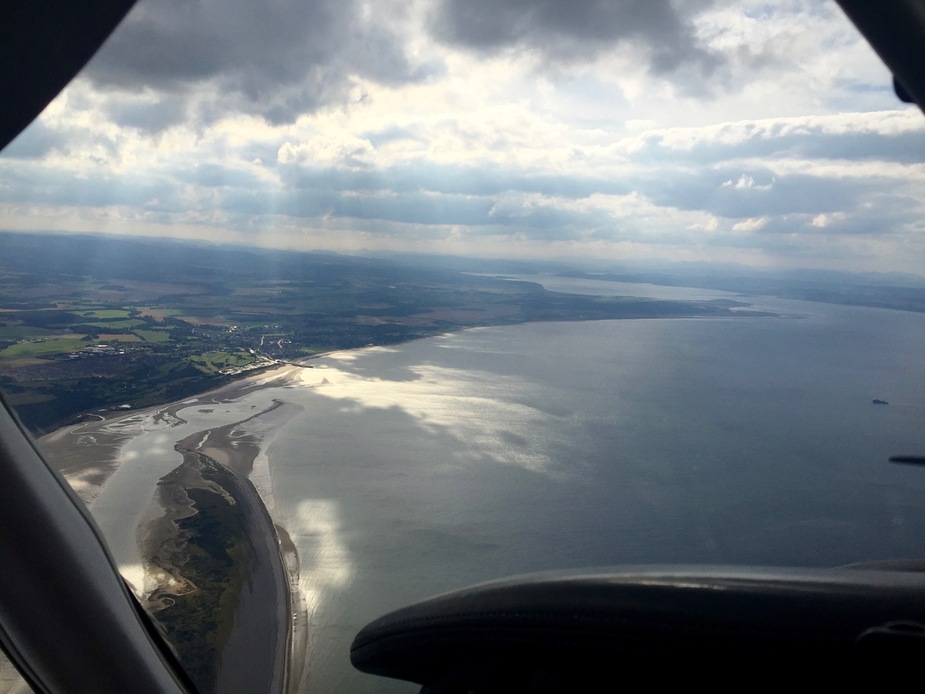 final RWY 23, note the strong crosswind from the left: 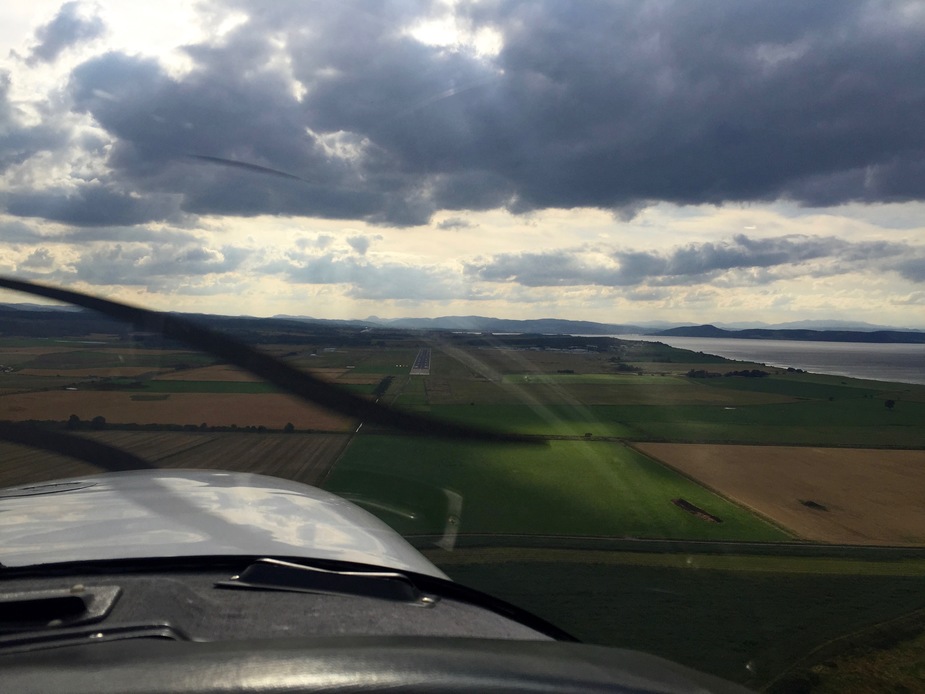 on the ground we were conveniently marshalled into the parking spot, the fuel truck arrived while de-planing.

Nice reading. Thanks for posting.

A very professional and inspiring report Solaris! Thanks for sharing.
I’m eager to read the reports of your local flights there (or alternatively your horse riding stories since that was the initial objective, right?

It sounds like you have your preflight process pretty well sorted. Very good work

Yes – quite often the IR image is misleading because it shows high altitude tops, say FL300. I think these can be detected by the rather “thin” patterns they form, and of course no sferics etc. It’s easier to see when you don’t have the coloured cloud top layer enabled. Fortunately this situation is blindingly obvious when you are flying and approaching the relevant area.

IFR departures in UK Class G can be tricky because if you filed your FP for a too-low level, London Control might reject it and the departure clearance will be subtly different – the handover will be to some local unit, and this may not be obvious to a non-UK pilot. But if you filed for FL150 (looking at the enroute level in the GRAMET) that will work fine.

I too always request a startup clearance and a departure clearance, at any large-ish airport, because while some don’t care about the startup, others really do.


It sounds like you have your preflight process pretty well sorted. Very good work

well, i have to say that a certain peter2000 ’s trip reports greatly contributed to developing and enhancing pre- and in-flight processes… i would even say i am guilty of copyright infringement, blatant copy-paste.


Yes – quite often the IR image is misleading because it shows high altitude tops, say FL300. I think these can be detected by the rather “thin” patterns they form, and of course no sferics etc. It’s easier to see when you don’t have the coloured cloud top layer enabled.

i kind of like the “tops” image, immediately highlighting potentially critical areas. i will give it a try for suspected thin bands without though.

one thing about the “tops” image is, i think it consistently underestimates the tops by a large margin. for example on a flight on saturday from Biggin Hill to Basel the reported tops were much lower than in reality, and i don’t think there was enough vertical development for the rise to be justified. this is not the first time i am seeing this: 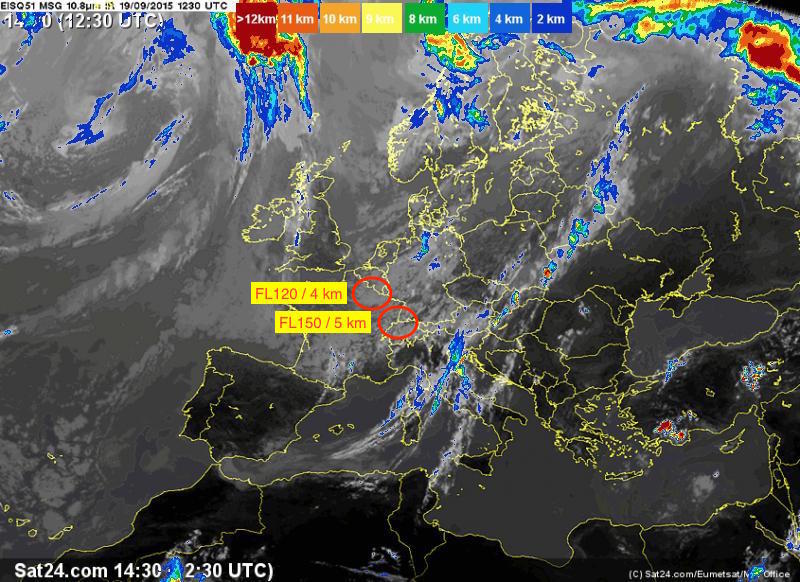 
I too always request a startup clearance and a departure clearance, at any large-ish airport, because while some don’t care about the startup, others really do.

i believe that the IFR term “startup” is not directly tied to “engine startup”, but it is ATCs way of telling you that from startup you are expected to be ready for departure within 15 minutes (engine start, taxiing, power checks, briefing, all completed). it marks the beginning of the IFR systems’s timeline. while i usually work with the hand-radio up to startup / clearance, i would have no qualms running the engine per se without startup clearance.

I don’t know how the SAT24 tops colouring is generated.

Ideally it should be done by knowing the temps aloft (which are forecast with a reasonable accuracy) and converting the ex-EUMETSAT shades of grey into temps (which EUMETSAT gives you, because the shade of grey is directly the absolute temperature, and the satellite IR camera is calibrated for that) and then converting into altitudes.

However one Spanish site I recall (may have been the Univ of Granada one) used ISA temps for the altitude conversion, which is obviously useless!!

And this may be the problem with the SAT24 image. Computationally it is less than trivial to do it correctly because you need the GFS 3D data etc. I bet you they use ISA temps…

And that leads to a huge variation. In the summer one often sees ISA+15 which is an error of some 7000ft if you just use ISA temps for the colouring. And in the summer the tops will appear 7000ft lower than they really are, because they are warmer and will thus be depicted lower down… dangerous!

I have not previously heard of “IFR startup”. AIUI, ATC transmits a DEP message when you start taxi on a Eurocontrol-filed FP. (and probably for a VFR FP too, if it is a proper airport, otherwise VFR FPs are totally unmonitored until you land). If you fail to turn up at the airport by the EOBT, they transmit a NODEP or whatever it is called.


i would have no qualms running the engine per se without startup clearance.

Seconded. You can always use the excuse that you need to run the engine for ground power (charge the battery etc).

Plus, the startup clearance thing is mostly for the benefit of those who pay (maintenance) by cycle and have a humongous idle fuel flow (i.e. turbines), it would be hard for them to power up their engine(s) just to be told they have a 2 hour slot…

I have had a bollocking for starting up without asking for a startup clearance, a number of times.

It’s also a good reason to get the #1 radio wired directly to the battery (via a CB of course, and with 2 diodes so you don’t get current flowing the wrong way)

A handheld radio solves all your “should I startup or not” ambiguities.

Except the handheld radio doesn’t power your aircon, though

tomjnx
LSZK, Switzerland
13 Posts
This thread is locked. This means you can't add a response.
Sign in to add your message