The fuel gauges on our TB10 are worse than useless.

With full tanks they will sometimes read about half full. Usually they read between a quarter full and empty, but with little correlation to the actual contents. Much below half tanks and they usually read empty.

Over the years transducers and gauges have been replaced with very little success and at no small expense. The group is not minded to throw any more money at them and we regard them as decorative, but a new member is keen for them to be worked on.

I ignore the gauges and check the contents visually before each flight – the TB10 has good in-tank markings showing 15L, 30L, 60L and 80L. Full is 102L per side. I write down the contents of each tank, switch every 20 minutes to keep her balanced, and my flight timer is thus my fuel gauge based on a very conservative estimate of 40L per hour. Realistically when leaned at cruise altitude she consumes about 32-34L per hour. I always like to land with an hour’s fuel on board.

I am pressing for a EDM engine monitor with fuel flow monitoring to improve the accuracy of the above. I think it’s a better use of money than trying to get the gauges to work.

Does anyone know anything about these gauges?

I don’t but what I have seen is a number of TB20s with a replacement panel in place of the edge gauges which houses much better looking round fuel gauges.

You can also get fuel sender info into some of the engine monitoring/fuel management units. I have an EI CGR30P which can accept such inputs, I don’t know whether the current TB fuel senders are compatible or if new ones are required. 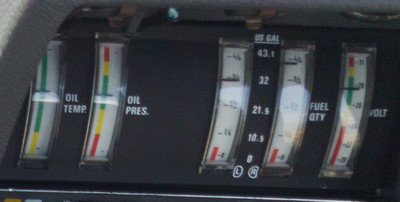 The difference is the sensors. Before they went to capacitive sensors, they were as useless as all the float-based sensors used in piston GA, which are out of a Vauxhall Viva (or more like a 2CV in Socata’s case) except that those in the cars were more accurate! There is no obvious reason why they should be as bad as they are, apart from just bad build quality / poor quality components (potentiometers which wear out) in the sensors. One thread here and another here.

After a certain airframe S/N they went to capacitive sensors and the gauges have been highly accurate since then – within perhaps 1mm on the dial. All the GTs have these.

One thread on using a totaliser is here. One issue with duff fuel gauges is that you now need to use a timer to switch tanks, or perhaps base tank switching on the totaliser reading going down by x litres.

In the last days of the TBs there was a replacement kit of round gauges made by Moritz which is long gone but I think these were for the capacitive sensors only. 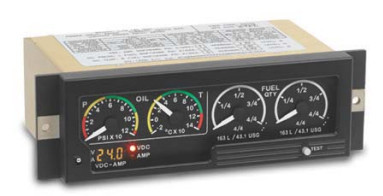 There are various replacement kits out there and this one may be applicable to TBs.

My first aircraft was a TB9. The fuel gauges were useless and frankly dangerous to rely on. Like you, I learned to measure pre-flight (and post flight) and work to an average fuel burn with a healthy reserve. Over the years I have owned aircraft with more accurate gauges and 2 with EDM type devices, but I still always measure by dipping, do the math and run the timer to change over tanks. If nothing else it is a sanity check. I regularly hire these days and I wouldn’t trust a club aircraft gauge or any a/c I don’t know intimately without this practice. By all means, fit an EDM but don’t give up on the manual check.

Hi Graham,
Admittedly I know nothing about TBs, or their fuel system, but I think you might be interested in reading the following article
http://www.knr-inc.com/shoptalk-articles/25-shoptalk/85-201702-aging-engine-instruments

It is a good summary of the situation although I don’t quite agree with these two paragraphs:

Here is the real problem: Because Mooney certified these instruments when your M20A-TN was produced you can’t just go to Sigma-Tek (or any other manufacturer) to purchase a new one even if it were available and being manufactured! You see, Mooney, not the instrument manufacturer, holds the approval to install that instrument in your airplane. The instrument has to come from Mooney with their return-to-service tag or stamp.

That isn’t true. You don’t have to buy the parts from the airframe manufacturer. That is merely the easiest way for an A&P (who doesn’t want to read, or cannot read, the regs, or goes to the wrong forums, not EuroGA

) to cover his 6 o’clock, while maximising his profit margin on the supply of the parts, by sourcing them from the highest priced vendor

In practice airframe manufacturers have ways of frustrating people who want to bypass them, and the easiest one is to assign a unique P/N to “their” item while removing the original label. One amusing example is here. But with trivial parts like e.g. a 30 ohm wirewound potentiometer made by Allen Bradley, that doesn’t work because (a) they won’t likely be rubbing off the P/N and (b) the P/N is trivially established by visual inspection.

That isn’t so simple. If it was, most repair work would be impossible because only a subset of aircraft parts come with an MM. If you open up some item with circuit board, and there is a BC109 transistor on it, and changing the BC109 makes it work, nobody can say that repair is illegal because you didn’t have the MM. The shop needs to be an FAA 145 shop to issue an 8130-3 for the repaired item, but an 8130-3 is not a requirement for installation on a Part 91 N-reg. Nor does the FAA require traceability for standard parts such as transistors; I recall seeing a document on that a few years ago.

For the EASA angle, one relevant thread is here and one (inconclusive) is here.

The article is very interesting in that it does suggest the main problem with crap fuel gauges is a worn out potentiometer. I suppose it has to be that because there isn’t much else to go wrong… well, apart from the indicating circuit getting corroded, etc. And no airframe mfg will be making the potentiometer; they will always be standard parts (not necessarily still in production).

Hi Peter,
That was one quick 100-line response to my 1-line link ;) … and a very interesting one ! Thanks !
Btw, what is an MM ? I have never seen this abbreviation before.

These are FAA-approved documents and have a lot of “legal” importance.

Post #3 has a link to some discussion on the CIES gauges; I am not 100% sure if they are applicable to the TB on the EASA-reg even though the FAA STC does list them.

Has anyone installed these? Just because something is on an STC doesn’t mean it fits, as I have found out previously (e.g. K&N air filters).

I’d love to fit the CIES sender units. I am completely fed up with appalling original senders and therefore having to rely on my (very accurate) EDM700…which doesn’t actually know how much fuel is on board, and just does sums. Lol.

So in relation to the CIES sender units:

(1) Do we know yet if they are EASA-approved to fit to a G-reg Socata TB plane fitted with the original cockpit fuel gauges?

(2) if the replacement CIES parts are easily and relatively cheaply fitted in place of the original Socata capacitative sender units?

I’m happy to be guinea pig if the sender units are EASA certified and the fitting is estimated to be not unreasonably priced.

Howard
Flying a TB20 out of EGTR
Elstree (EGTR), United Kingdom
11 Posts
This thread is locked. This means you can't add a response.
Sign in to add your message