Trip Plan and Report - Biggin - Shetland - Norway/Lofoten - Tromso and back...

So, here is the plan; not strictly a flying tour but means-of-transport, so flying days mixed with several days of boredom on the ground in between (or the other way round, according to my wife…); the Norway part is to be flown low V/IFR at lowest safe altitude, only if low in solid cloud I’ll give up and climb. I have to say with internet and SkyDemon and Jeppesen planning the whole thing was a doddle, only thing left to do is call the airfields and ensure they have AVGAS and I can pay by credit card; the AIP entries and Avinor who operate these places are pretty clear, but better safe than stuck. And checking I can park for a few nights at Tromso without paying more than the aircraft is worth (Cessna 303 Crusader; 2.3 tonne twin, so sadly no all-you-can-eat airport season ticket available…)

and then back (no idea yet which way, tips appreciated, spectacular airfields in fjords preferred…) to end up on Kirkwall

I don’t normally do write-ups (my trips tend to be to boring, run-off-the-mill continental airfields), and I certainly won’t beat Peter on range or sunshine, but hope there will be a few nice photos to share.

Make sure not to confuse Kristiansand and Kristiansund!!! There is only one letter of difference between the two, and given the description of your route, I think you meant KristiansUnd.

On the way back you can fly Trondheim, Roros, Dagali, Bergen.

Your route sounds wonderful! I wish you fair skies.

Just kidding of course. That is some trip you are going to make. If you go up along the coast, maybe go back down inland from Trondheim like Aviathor describes, then you will fly across the largest mountains and glaciers. Don’t expect too nice weather though. This summer has been the worst anyone can remember, and seems to continue that way.

Also, if you are a member of a club or AOPA and are flying non-commercially, parking is free on all Avinor airports.

This should be amazing, Cobalt. I’ve been planning to go up there for years and just take the occassional look at the MSLP charts…

Maybe this can convince your wife some more:

There was no landing in Bodo because despite calling the night before and explicitly asking for AVGAS availability, they realized they had none on final, so we had to divert to ENBN.

Enjoy your trip – I am sure it will be awesome. Oban – Lerwick. With Kirkwall and Fair Isle to look at on the way. All prep done (2 phone calls to ensure fuel & PPR, 10 minutes fiddling with Skydemon). Weather looking ok – the nasty cold front should be through by tomorrow morning, but its going to be windy and a bit bumpy at the beginning of the flight on the backside before it calms down as the flight progresses

Slight complication: Headwinds will make the flight tight, as Lerwick closes at three, so might have to chop off the sightseeing dogleg or get the fuel truck to refuel us during a touch and go at Oban… so really hope London, Luton and East Midlands are in a good mood, otherwise it is dodging CTRs…

Good old Form 215 should be out in an hour or so, but might be in bed by then so will probably post it tomorrow morning.

Day 1 report – delayed by one day…

It all started out quite nicely – although there was some lower cloud lingering longer than forecast, by the time I got airborne (09:00 local sharp, Biggin got me out as soon as they opened) it had all cleared up nicely. Biggin coordinated with Heathrow Special, so we got a sqawk before departure and an immediate handover, which was great because departing from Runway 29 one reaches the City Zone boundary rather quickly.

After London ensuring we were indeed in a twin we were cleared the usual route – London Eye / Alexandra Palace (alley palley in local ATC speak – ugh!) not above 2000ft… 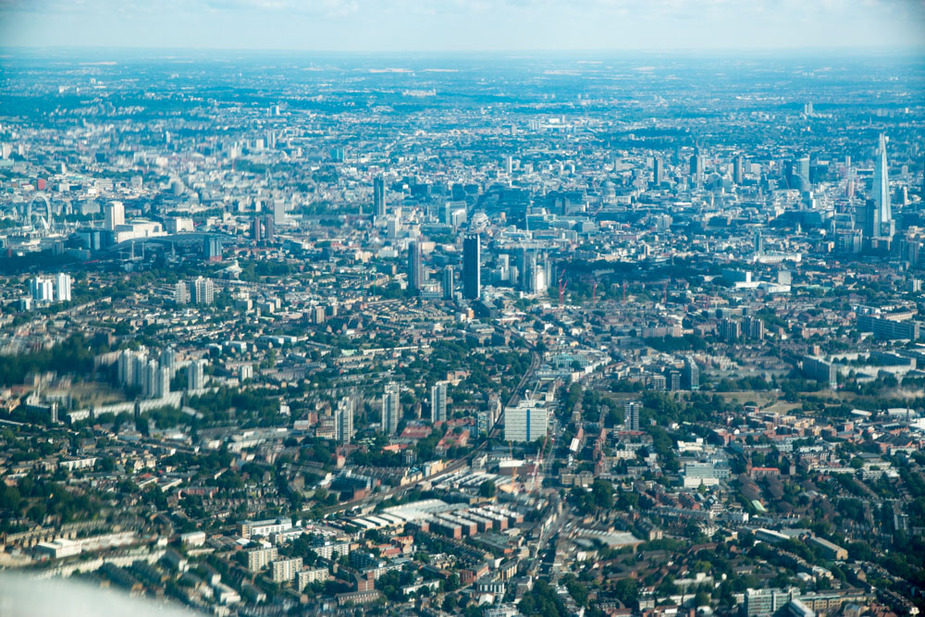 The controller handed us over to Luton, where we also got the usual clearance via just east of the airfield again not above 2,000 ft, As soon as airspace permitted, Luton offered us a climb, so we went up to 3,400ft. East Midlands did give us a crossing at that level, so the “straight line to Scotland” plan was working nicely…

This is Wymeswold, an airfield-turned-solar-park near East Midlands. Strange they kept the runways clear… 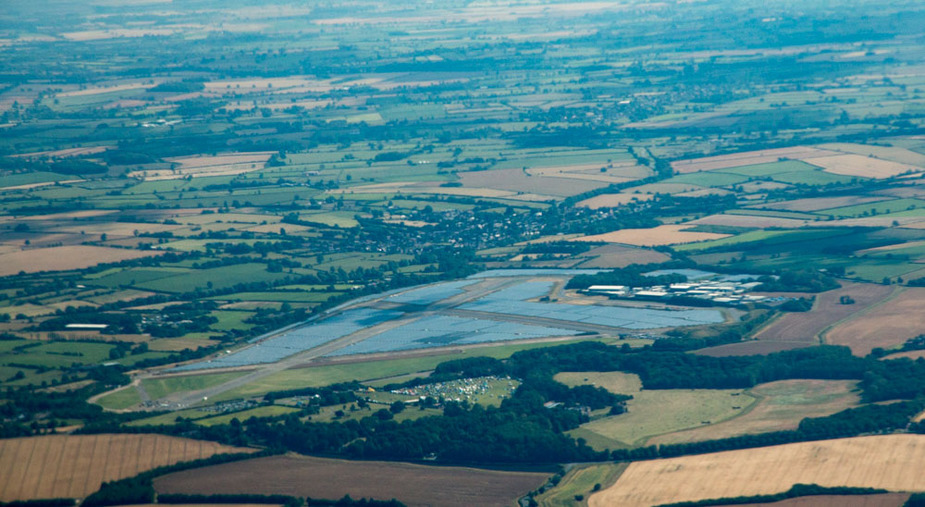 We carried on towards the lake district, dropping down to 3,000ft as we progressed – we had the choice of going above cloud or stay below. There are some hilltops (sorry, “peaks”) just above 3,000 ft there, but everything is nice and wide, so to get us used to flying near terrain we decided to stay at 3,000ft.

Windermere was first, of course…. 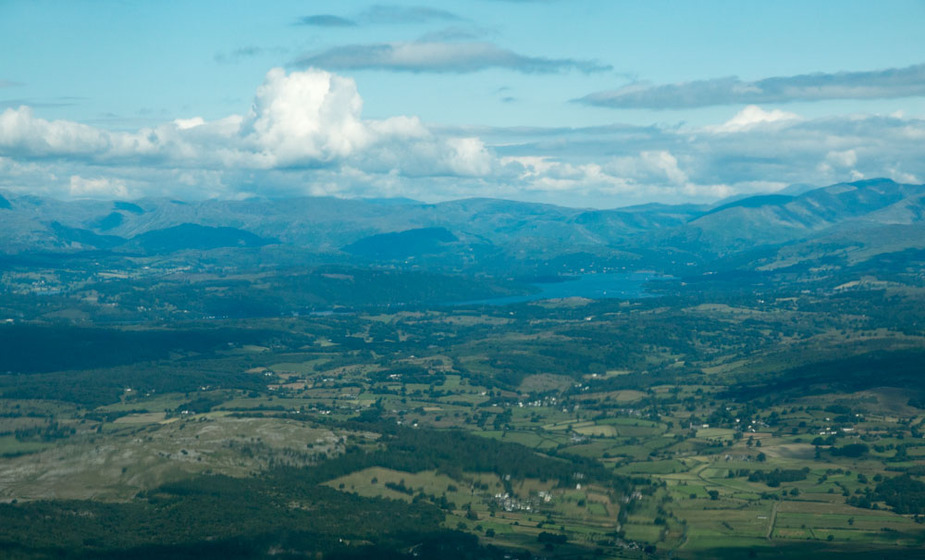 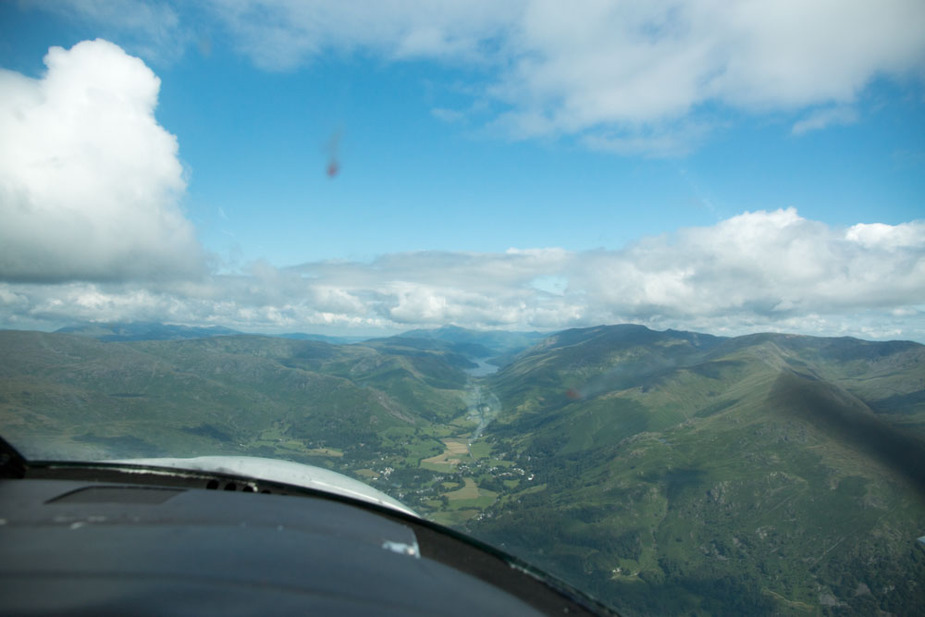 This was near the Derwent Water, around ridge level slightly below the Skiddaw (3,100ft). I actually flew towards that ridge to check the EGPWS warning times before I turned, would post the video but my PC card reader has packed in. Warning was in time to initiate a normal turn (25 degree AOB) and remain well away from the terrain. Not something I would want to rely on, but reassuring. Checking the track later with Skydemon, the lowest VERTICAL terrain clearance crossing the lake district was 900ft, closest HORIZONTAL distance was around 1.2km, where the below photo was taken. Given some of the Fjords I will fly in are two miles wide, I’d better get used to that image… 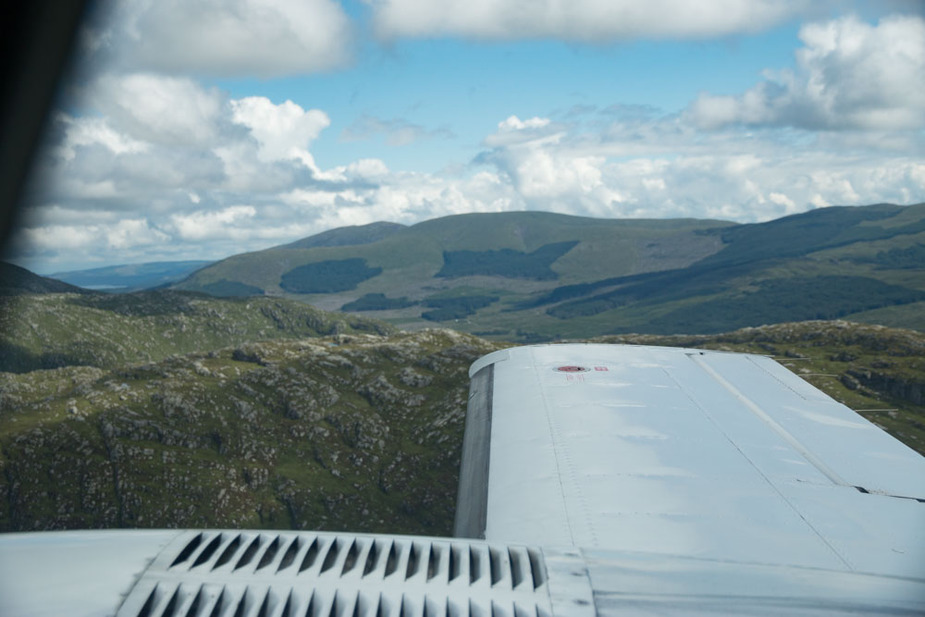 Since Biggin got us out early, we took the scenic route around the Mull of Kintyre and up the coast. Progressing further towards Oban, here one of the many random rocks sticking out of the water – this one is Ailsa Craig. 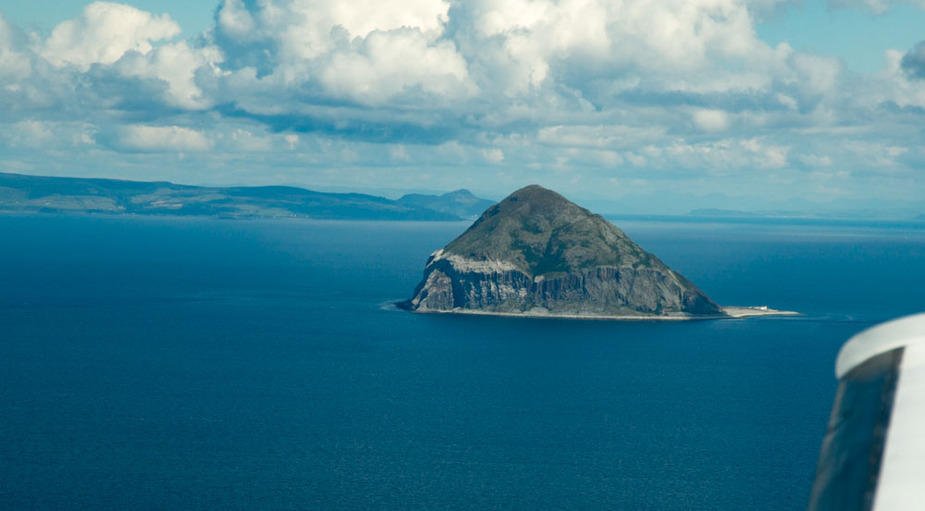 Track starts near Luton because I only fired up Skydemon at that point.

After 45 minutes or so to take on fuel and pay the landing fees, we left Oban for Lerwick/Tingwall on the Shetlands.

Plan was to follow the valley from Ft. William to Inverness and then follow the coast, overfly Kirwall and carry on. With a few showers around, initially it did look not to great… This was taken immediately after departure at 2,000ft looking towards Fort William. With Fort William clearly visible in the distance (30+ km) visibility is great, but no exit is visible, so need to turn around or to climb. 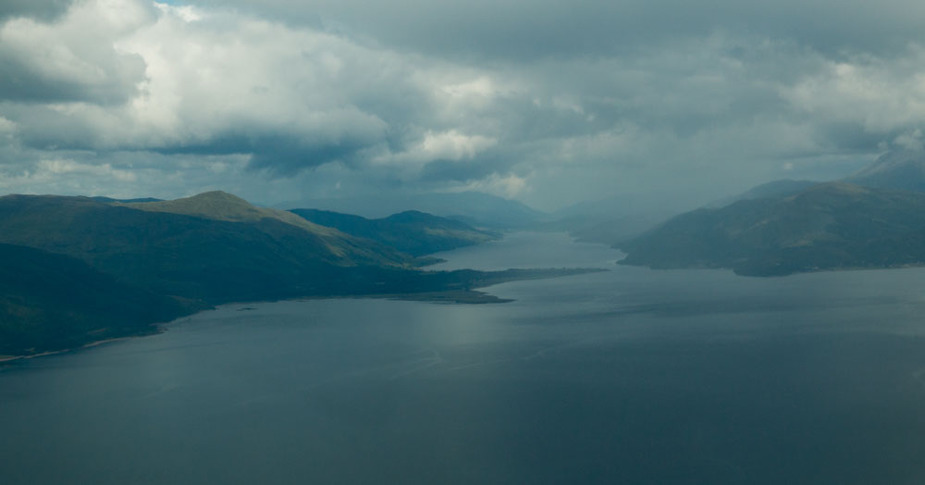 As things progress, visibility stays the same and even improves – this is past Fort William, overhead Loch Lochy at 2,000ft with Loch Ness visibile in the distance… so looking very nice and safe that way… 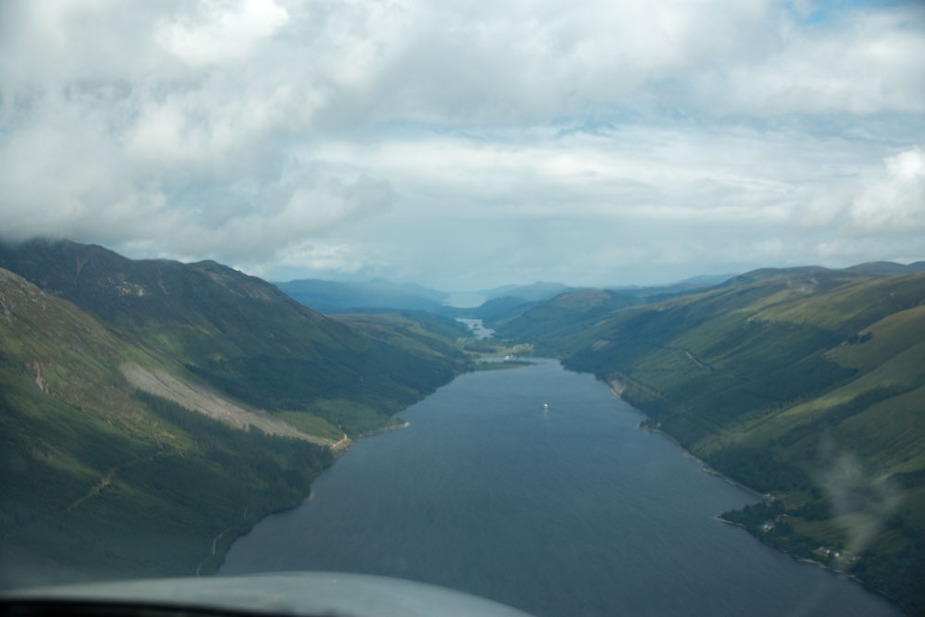 …but the view sideways, with terrain raising to above 3,000ft, takes some getting used to. At the altitude (2,000ft) the valley is maybe 3 miles wide. A 180 at a moderate angle of bank (30 degrees) takes more than a mile, and at 45 degrees AOB something like 2/3 of a mile, so normal valley flying tactics are to stay close to one side of the valley. Plan B in case I can no longer see more than 5 miles ahead is the 180, plan C is a climb, so I fly this with a waypoint set up at the exit and the HSI needle nicely in the middle – so if I can initiate a climb I can use that to stay in the valley until I am at a safe altitude. Which takes 5 miles. Yes, I worked that out before the flight – not something I want to wonder about when already in the air. 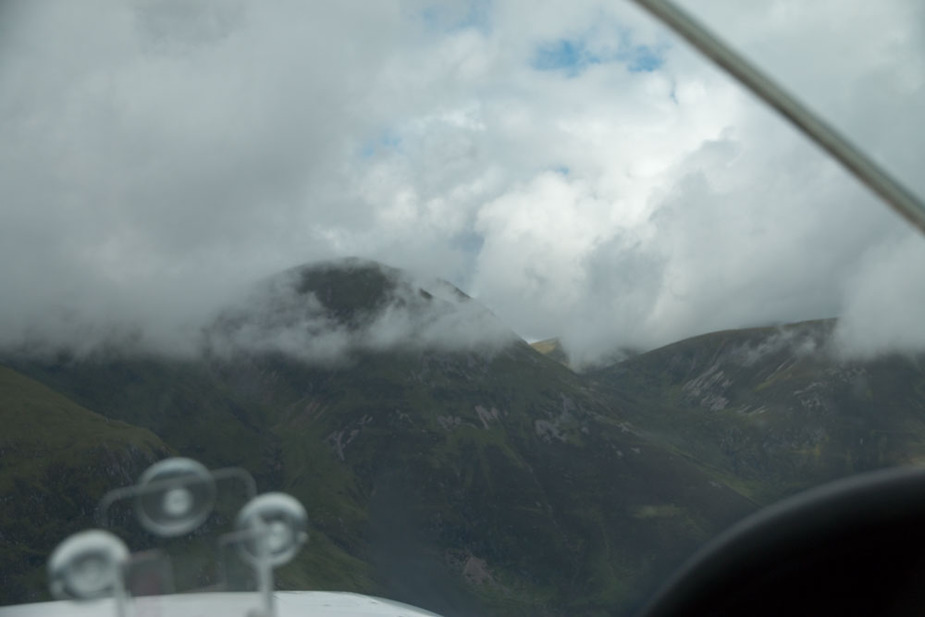 Trying to talk to anyone in the valley was pointless – in Scotland, nobody can hear you scream, as the movie title goes.

As we coast out past Wick, a small spanner in the works – Scottish advises us that Sumburgh has some sort of power failure, and only the tower frequency is available. As we get closer, they inform us that they will not issue any clearances, and also that we cannot continue with Scottish because their repeaters on the Shetlands are out of action. My wife reassuringly tells me I should talk to her instead, so we carry on, although at this point Sottish makes it sound like the problem is Shetland-wide and our destination might be closed. We carry more than enough fuel to return to Wick, so we carry on, hoping that the FISO at Lerwick has either power or a hand-held. Shetland is not a Highlands-and-Islands airport but a local affair, so cannot use the out-of-hours permission there…

This is Fair Isle (basically 20 houses and an airstrip) 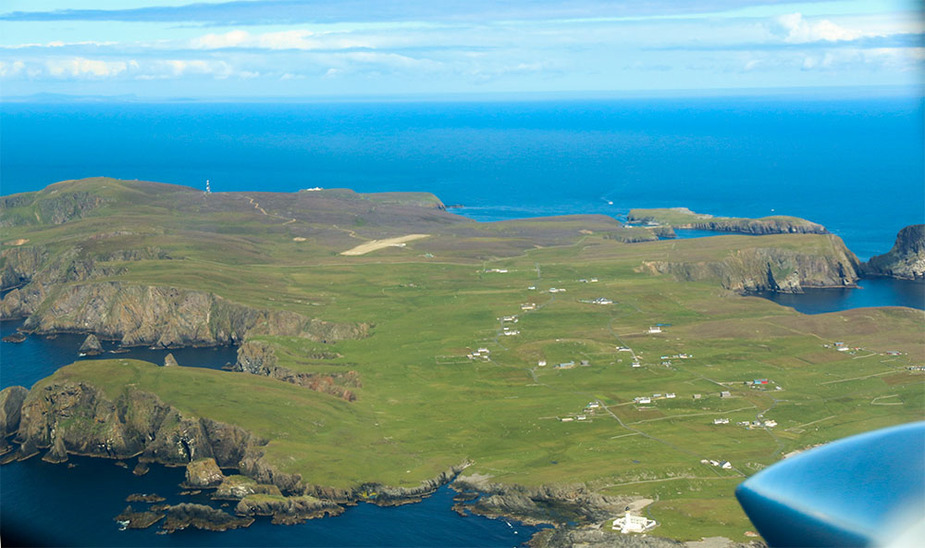 Nothing improves, so after passing Fair Isle we have to dogleg around the CTR. Sumburgh can’t raise Lerwick so have no idea if they are open or not. Ho hum.

Now, why on earth do they have to close the airspace when the radios are down? They still had one frequency, they had primary radar (they asked us if we were the aircraft south of Fair Isle at some point) – why don’t they just revert to Class G and at least allow operation, if they can’t offer a service? So we fly a dogleg around the zone (thank goodness for GPS – would have been a bit trickier without it, probably a 15NM DME arc around the VOR/DME and then dead reckon northwards) and proceed towards Lerwick, which was (a) open and (b) unaware of any problems with power, so must have been a Sumburgh thing. Time flown: 1:50; exactly as planned – we skipped the leg via Kirkwall (we had seen enough for one day) so that saved the time we wasted going around the Sumburgh airspace.

Beautiful photos, especially of the Scottish scenery. I hope the recent weather hasn’t dampened your ardour too much.

Josh
London area
17 Posts
This thread is locked. This means you can't add a response.
Sign in to add your message

Looking for nice airport / place to visit in Norway (february), between Tromso and London
LA to NY. And back.
Twin - Lofoten as a fly in destination
Trip across Europe... UK to St. Petersburg