AviatorsBot - A Telegram Bot for Weather Updates and Calculations

@Anders And thanks to your feedback I also discovered another issue, that runways which are only used in one direction, like runway 18 in EDDF caused an issue with the xwind command. Which is now fixed.

Here you also get the correct response for the three parallel runways: 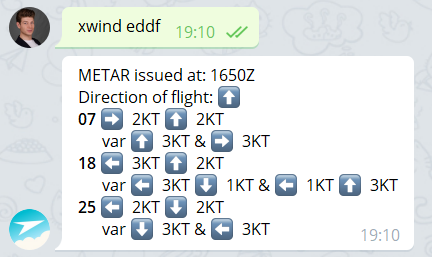 And for the curious a look behind the curtain, the monitoring of the bots performance: 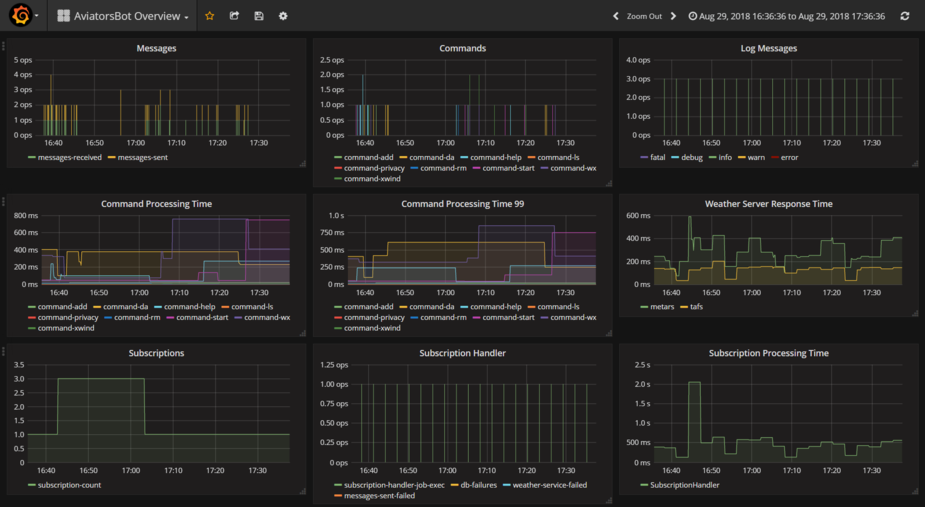 @LeSving Thank you! Main reason that I’m not using SMS is cost, but also that I want to send photos etc. At the current message rate it would cost about 600 EUR per month for the SMS gateway usage. SMS is actually the most expensive way to exchange data in the known universe, if you are up for a funny read from 2008: https://phys.org/news/2008-05-space-scientist-texting-expensive-scientific.html 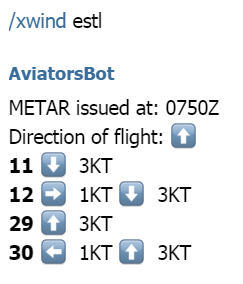 @Anders Thank you! As I suspected, this is caused by incorrect information from openAIP, which seems to be very wrong:

I updated the runways based upon the Swedish AIP. But it will take some time until this propagates into the bot. Since you also obviously know the airport better than me please cross-check my edit: https://www.openaip.net/node/161378 and I only checked the runways, so maybe you got further information to contribute too.

New Feature: Lightning Strikes and Region Preference
You can now get a map of the current lightning strikes using: /strikes

Since I want to keep the bot worldwide, as far as possible, you can also include a region, for example North America: /strikes na
To make this less tedious you can also set your own region default using /region 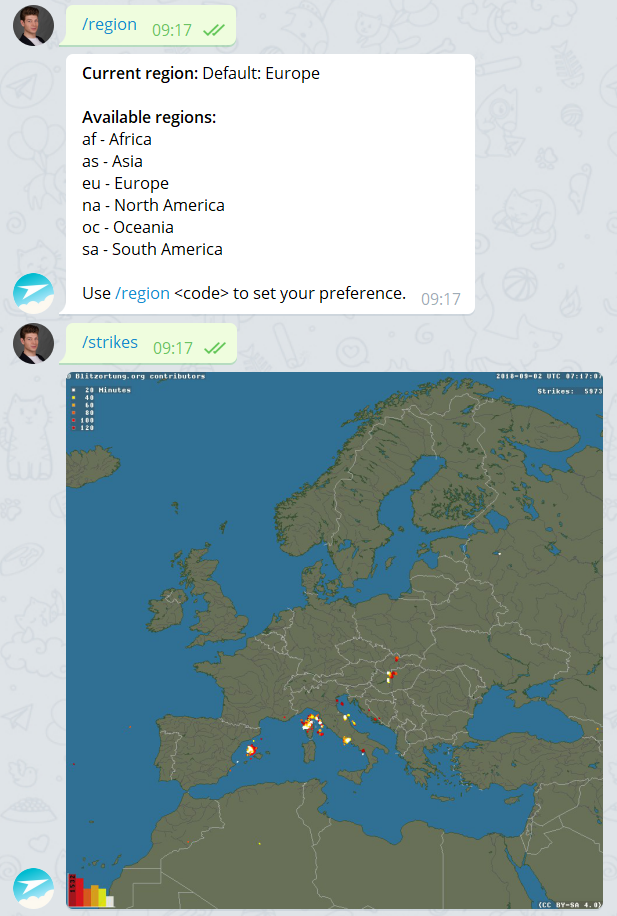 You can now use the /sigmet command to request a map of all SIGMETs and current flight conditions for a region. 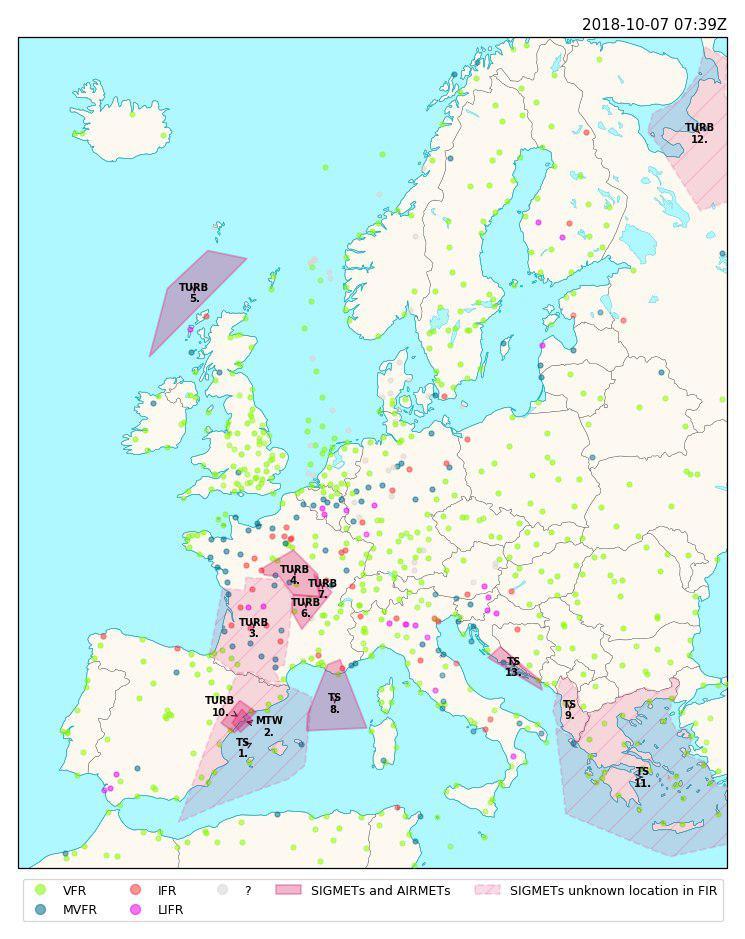 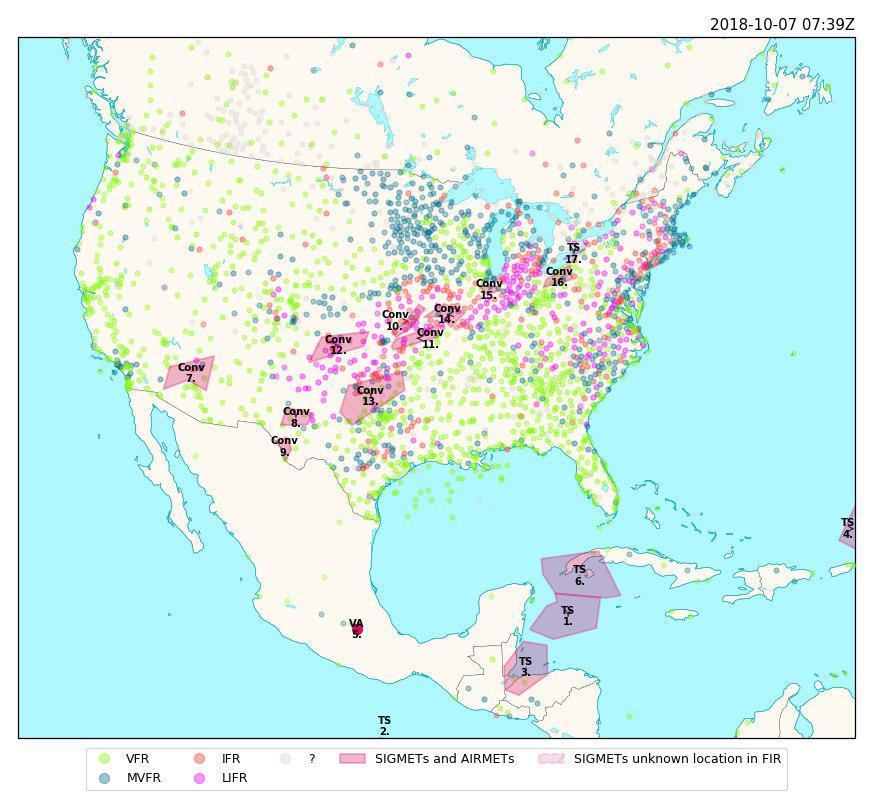 After getting the map you can send /sigmet to get the full sigmet.

This is really neat.

Can you make it display the current Eurocontrol “ATC strikes” (it isn’t actually called that) map? I recall seeing it on their website but it was onlya tiny image.

Also, later I got this sequence:

Also, later I got this sequence:

Sorry for the late response but I’ll look into it! Thanks for reporting it!

I’ve seen some issues with TAFs and also METARs being provided late out of the NOAA ADDS database.

Currently the handling of when to send an update works as follows:
Both a hash (digital fingerprint) and the date of the last sent update are stored in the database and if either changes when the new date is retrieved a message is sent. So if any one letter changes in the TAF, even if the date stays the same and update would be sent. TAF AMDs are not handled any differently by the bot, but might be on the NOAA side.

I’ll also check if there is anything in the server logs and let you know.

Hello everybdy
Some remarks and some advice..
AUTOROUTER seems the best free App for flight preparation, sending FPL (IFR FPL) and for EOBT management.
So I have discovered telegram with Autorouter.
I use MSG (Iphone) to send and get back messages in fligth until 6000/6500ft if I don’t overfly a desert (as MORVAN in France !).
But of course, at this altitude, I can’t receive any Data (using AEROWEATHER) nor Maps and so on.
Since I read your thread, I will try TELEGRAM with Aviatorsbot to get infligth data metar and Taf vers 6000 ft or more.
What is the higher altitude you get Metar/Taf Txt. with Telegram-aviatorsbot ?
At this time, we shall wait a long time before ADS come in Europe (but we have 8,33 !) and the only way to get weather Maps in flight is satellite system with subscription (as https://www.ing-golze.de/blog_gdl90.jsp) but the both are expensive for only few marginal weather conditions a year (non commercial flights !)…
Any advice about that ?
philippe

if you fly in the weather only very occasionally, then you should

The only tricky thing is that you have to decide before the flight weather whether you might need airborne (satellite-fed) data or not.

boscomantico
Mainz (EDFZ), Germany
47 Posts
This thread is locked. This means you can't add a response.
Sign in to add your message