After all that permit trouble and (sometimes) high costs since we left Chile we hoped for a more relaxed way of traveling in Mexico – and we weren’t disappointed. As many western governments have issued travel warnings for several regions of the country, we planned our destinations accordingly – what basically meant staying in the southeast. We had never been to Mexico before, so I can’t write anything about other regions or the country as a whole. 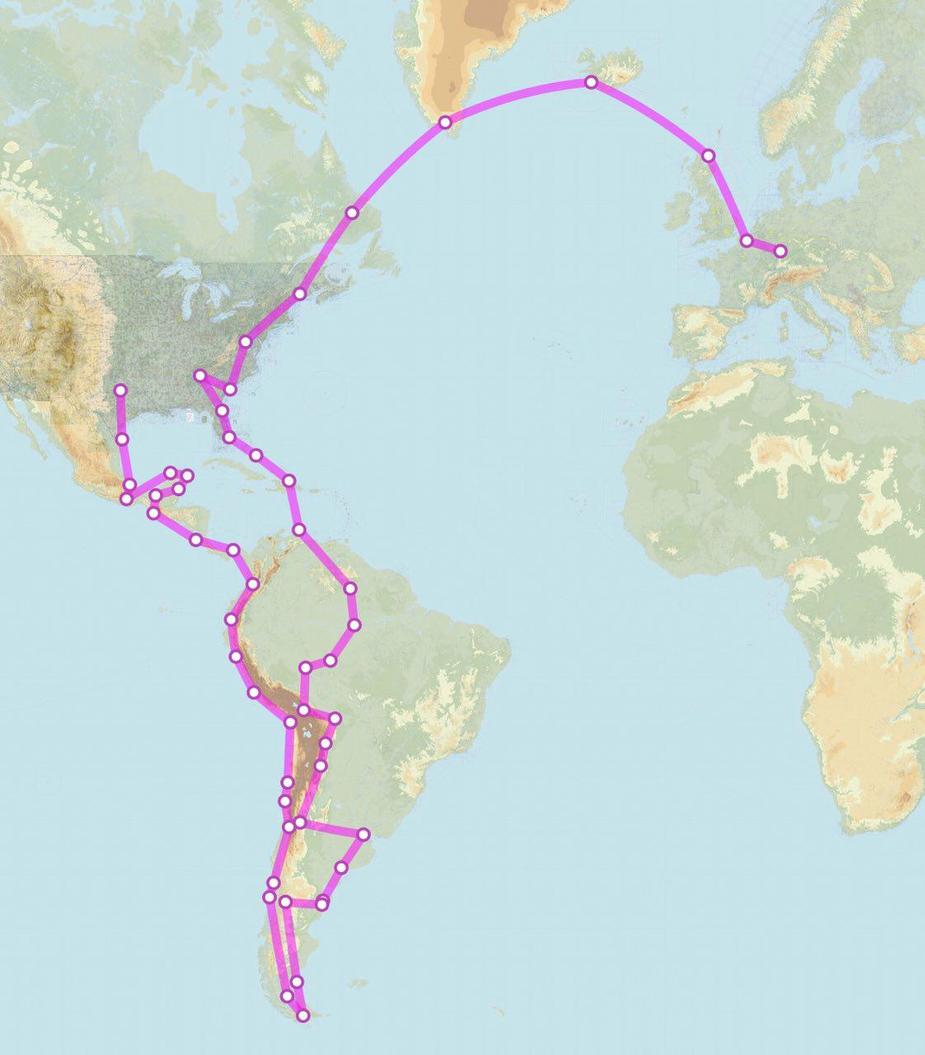 Our route to Weatherford (KWEA) Our Mooney in Tapachula (MMTP)

The immigration process already proved that our hopes for less trouble weren’t too high. Customs inspected our luggage thoroughly but the guys were very friendly. They had a dog (like everywhere else) but it couldn’t be convinced to show any interest in our stuff or the aircraft.

Immigration was next, where the helpful and pragmatic attitude of the officials showed again. We had filled in the GENDECs as always – crew only, no passengers. After a little chat the policeman stamped our passports but the stamp allowed us just to stay for seven days. When we said we wanted to stay longer he replied that that’s not possible, crew can only stay for a week. But he said he will call Mexico to solve the problem. This left me confused for a while till I realized that he was talking about Mexico City. The solution the guy in the capital proposed was simple: we had to be crew and passengers at the same time! Just add our names and passport numbers in the respective field of the GENDEC and we could get new stamps valid for 180 days.

Finally we had to get a document called Internación which was available at the operations office. Fees apply for immigration and Internación, but at about 120€ it wasn’t too bad. We could only pay cash in Mexican Pesos, but that was not a problem either, I could go to an ATM in the terminal building while Mrs. terbang collected all the stamps required from various offices. The whole process took a while but it was all very friendly and straight forward.

No permit is required to overfly or land in Mexico and flying within the country was a very pleasant experience. ATC speaks English (it turned out to be easier to switch to Spanish on the ground though, to clarify where to park etc.) and prices are affordable. Avgas was between 0.80€ and 0.90€ per liter and landing plus parking was about 10€ throughout, almost independent of the duration of the stay. No handling was required except for Mérida where we payed 50€ for the use of the GA terminal. Well, we walked through it basically. Flying was straight forward, though a flight plan is required for foreign aircraft even when VFR. Considering this, we flew one or two legs VFR but the rest IFR.

There is GA in Mexico and we talked to other pilots on the ramp once or twice but didn’t get any closer contact. The regions we traveled are quite touristy and people we met were very friendly, a bit more formal perhaps than in other parts of Latin America. Tapachula wasn’t a destination in its own right but it’s one of only two possible ports of entry when coming from Central America and at least we could sample the famous Mexican food for the first time. Anyway, after a day of rest we left for Palenque. Palenque probably is one of the two most important ancient Maya sites in Mexico, so we made this our first stop after Tapachula. The mountains we had to cross reach over 10000ft and it was a beautiful VFR flight. We even spotted the Palenque ruins during approach. 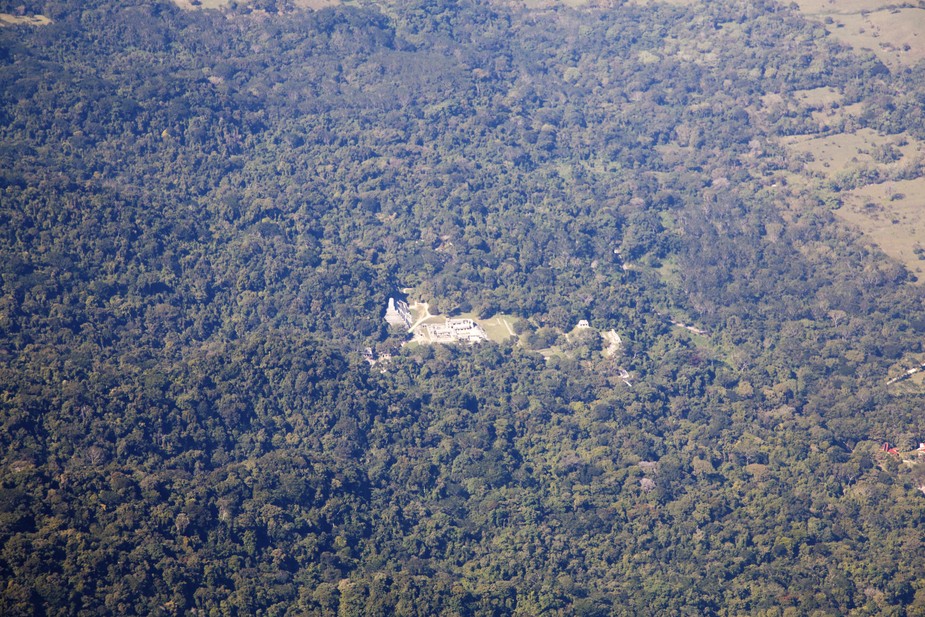 The famous ruins of Palenque seen during approach

The town of Palenque is nothing to write home about but the ruins are peerless as our guide book put it. They are situated in the final foothills of the central mountains before the plains of Yucatán start and are famous for inscriptions deciphered by archeologists in the seventies and eighties. There are a few more archeological sites near Palenque that can be reached by organized day tours. We took one and it turned out to be a nice outing. The ruins are less visited and still give you kind of an India Jones feeling. Our next destination was Chetumal on the southeast coast of the Yucatán peninsula. We flew VFR again and found the region to be surprisingly densely forested. Yucatán from the air

There were again some ruins to be seen near Chetumal. We rented a car and drove around a bit. The landscape wasn’t that great, rather boring in fact. As it’s completely flat and all covered with bush-like jungle, you don’t see anything while driving. However, the ruins are spectacular. Ruins of Dzibanché near Chetumal

Our search for an airfield in northeastern Yucatán turned out to be a bit more complicated. Playa del Carmen was too short to our liking for a departure in the heat, Tulum is military only and Cancún too busy with CAT. So we opted for the island of Cozumel even though we actually didn’t want to visit the island itself. We had to fly IFR and were on top most of the time, so we missed the Riviera del Maya as the stretch of coast is called. After landing we took a ferry over to the mainland where we had arranged a rental car again. Besides the beaches (and cave diving, as I learned from Emir :-) the Maya ruins are the main reason to come to Yucatán. Chichén Itzá is the most famous site here and it gets really crowded, so getting up early really pays. The pyramid in Chichén Itzá

We drove up to the very north to Rio Lagartos what means alligator river in English. Funnily it’s neither a river nor are there alligators – it’s kind of a long lagoon where crocodiles live. One of the crocs near Rio Lagartos

Besides the crocs a lot of birds can be seen in the mangroves. Locals take you out in a boat for two hours for a modest fee. We’re no ornithologists at all, one could rather say we have no clue but we enjoyed the boat ride a lot. A pelican landing next to our boat

However, the most famous species there are the flamingos. Not being color blind (no medical otherwise, right?) even we were able to clearly identify them. 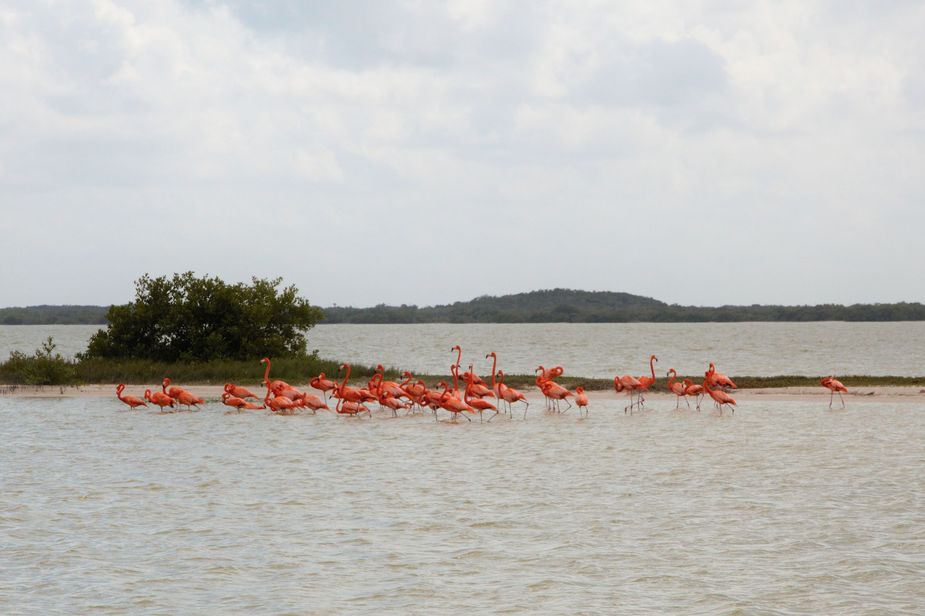 We crossed the peninsula for Mérida with our next flight. We decided to do this IFR again as the weather at our destination was cloudy with a rather low ceiling. 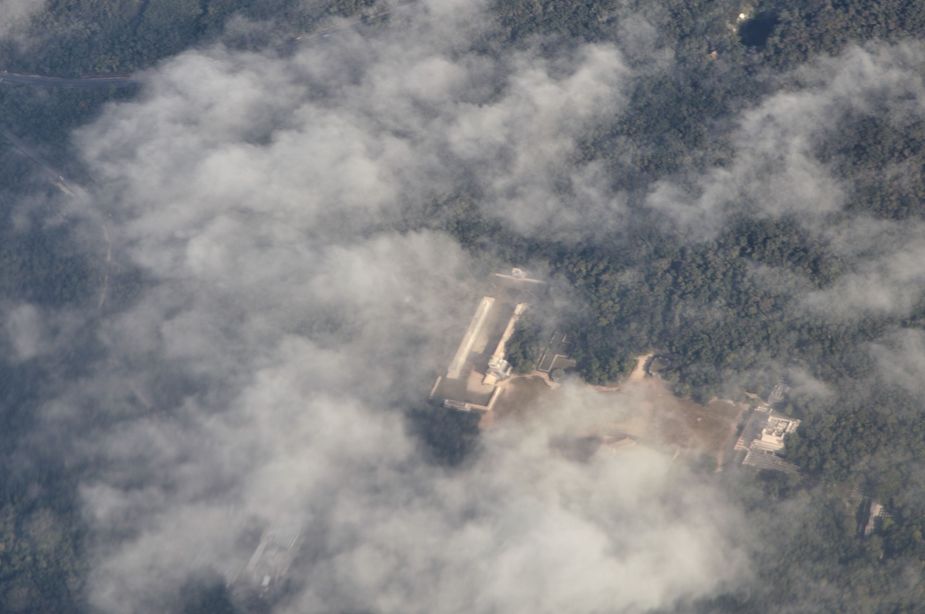 Mérida turned out to be a pleasant place with lots of colonial architecture. It’s a touristy city but offers all the amenities one might need. Of course there were more ruins to visit around the city. Without the burden of any deeper archeological understanding we visited quite a few again and simply enjoyed the atmosphere. Again we drove around with a rental car to check out some more places. Rather by accident we found the colonial town of Campeche which turned out to be a little gem. After two weeks of flat landscape and Maya ruins we left Mérida for Oaxaca which is located in the central valley at an elevation of 5000ft. Back to the mountains

Of all the cities we visited in Mexico Oaxaca was the most lovely one, hands down. It boasts a wealth of churches, palaces and other colonial buildings. The church of Santo Domingo in Oaxaca

Moreover, Oaxaca is considered the food and Mezcal capital of Mexico. Mezcal is a spirit distilled from Agave plants. It’s an acquired taste, so to say, but we tried hard to get used to it. There is some spectacular landscape in the mountains around Oaxaca, one example being the “petrified waterfall” of Hierve el Agua. It’s not a waterfall actually but was formed by a mineral rich water source in the dry surroundings. And of course there are more ruins. Not Maya this time but not less spectacular. I insert one last photo, hoping no member here thinks he has stumbled into an archeology forum by accident. The last flight within Mexico took us to Veracruz on the Gulf coast. It was a nice flight across the mountains again. On the way to Veracruz

We had chosen Veracruz for practical reasons. There are some nice places in the surroundings but the city itself is not too appealing. We left Veracruz on an IMC day for Brownsville in Texas, where I flew my first localizer back-course approach ever. Was not a big deal, but anyway…