Airparks in Europe and around the world (merged)

It’s funny. I do not think Airparks, are a UK thing. The perception is that the U.S. thrives on them, however, I have no stats to back this up, other than there appear to be quite a lot of them.

A while ago, myself and a construction partner, we’re going to buy an airport, build some houses on additional land that came with the purchase, this would fund the airfield development. Part of the project was for eight houses, with hanger and runway access, as part of the runway extension/improvement. It could have tested the water. Project fell to pieces, when the owner of the airfield, led by a commission led agent, wanted twice what the asset was worth. We rejigged the numbers, to give him a step deal, but he could not see it. We walked away.

Funnily enough, Donald Trump was involved, for his Aberdeenshire development, but he did not get planning for that. Was in the papers for a bit. Seems a common theme where airfields are involved. UK planners will give planning for 1000 houses, with no services built into the development, and yet will not let you put a hanger in a field for an airfield. Crazy…..

I think we talked about this many times here.

My recollection of the air parks around Phoenix, AZ in 2006 (“Stellar” was one) was that they were exclusive places who did not even want practice approaches (they had GPS/LNAV approaches) because of the noise. So they were invitation-only, which in Europe merely generates accusations of elitism.

I have been watching the [in]famous Murcia Air Park project for about 10 years. They still kick it around a few aviation shows… I believe a few of the originally projected 700 houses have been built and are occupied. I thought it was a scam to extract EU money (a completely unknown concept in Spain, and other places, of course

). But they did propose a flying school and a maintenance facility, which would have meant a lot of noise.

What I think most keen aviators want is a nice house in a nice location (like everybody else really!) AND with an airfield nearby. But not a runway in front of your house. Actually parking your plane next to your car, at home, doesn’t deliver any extra value compared to having a nice heated hangar, with a radio controlled door, a radio controlled tug, etc, and not having to brown-nose the hangar owner the whole time which is the typical European scenario for many pilots. A group ownership of the whole airfield (keeping property sharks away) then completes the deal for the long term.

Whenever DT’s jet (not an entry level jet, I should add) landed at Aberdeen, the entire management there started salivating and were thinking “how much nicer is it to have Mr Trump’s nice sexy jet here than dirty piston GA” and they went on the try to implement that policy quite nicely. I think I paid 200 quid last time… a hugely wasted airport where very little happens and which could do GA very well.

This really is ‘Hangar’ talk

I can think of nothing better than having my planes in a big hangar at home, with a runway at the end of my driveway. Some weekends I might make two or three round trips to the airport at 40 miles each, and I’d love to just walk into the hangar instead. Airport noise is no factor for me, and most residential air parks don’t seem to have a terrific amount of traffic regardless of public use or not – there usually isn’t a lot to visit nearby except people who live there. I don’t think noise exposure for residents is the main issue. It certainly doesn’t stop people buying expensive homes in noisy urban environments, and that’s nighttime noise.

The issue for me (and I think its an international limit on the airport home market) is land values being high enough that its hard to find an airport house within commuting distance of a well paying job/business. If on the other hand you’re retired and/or have an income that’s not geographically dependent, life could be good at a nice airport house in rural area. Land prices are obviously relatively lower in rural France or northern UK, as well as Spain. A photo is always nice, so here’s one for sale on Barnstormers at $475K USD Link within commuting distance of where Lancairs come from in Oregon… Maybe they’re hiring 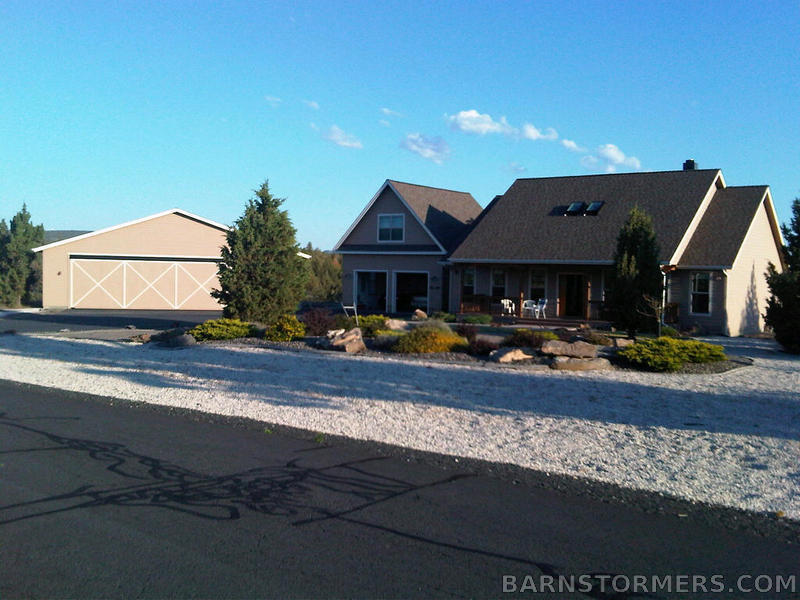 Put Jumbolair in Google and have a look at Travolta’s modest lttle pad.

I think there is demand for an Airpark but only for the very wealthy. They would need 5-10 acre plots and access to a full IFR runway for their exotic machinery. The airpark would need to have other advantages such as low taxes or close proximity to something useful. In fact an Airpark with Free Port status would be interesting. Don’t know how you would achieve it particularly in Europe.

Certainly an Airpark as a holiday destination I don’t think will work, just look at the one in Spain referred to by Peter. It has nothing going for it other than its in Spain.

Airparks where people can live securely and have other advantages would work in my opinion.

OK, it’s not in Europe, but here’s to those who always wanted to live the aviation life (Peter?):

PS: only know the immediate area from the air, but it’s a beautiful part of the world!

Also of particular interest to any volcanologist – the opportunity to build your house in the proximity of one of the most active volcanoes in North America.

Airparks… Such a wonderful thing. One of the (many) good things that the US has to offer. Such a shame we can’t seem to pull this off in Europe in a serious way. There must be thousands of EU pilots who would buy a property on one in a heartbeat, if only as a second home.

There are a few in France and in Sweden IIRC. So, let’s get creative here.. Just like people share aircraft, how about sharing a home on an airpark? Hmm, I can envision a ‘EuroGA’ home in France.. And if we organise a yearly fly-in, we’ll camp in the garden and allow our Guru Peter to take the master bedroom.

aart
Private field, Mallorca, Spain
94 Posts
This thread is locked. This means you can't add a response.
Sign in to add your message

Which countries allow private strips / operating from your own land, and how hard is it to organise (and airfields for sale)
Permit to Fly in Spain
If you owned your hangar, what would you do?
Who has the best hangar?