Perhaps I am being very stupid, but having read some of the byelaws, the common theme appears to be that the byelaws only apply when the DA is hot so far as overflight, hence my question that had you any specific byelaws in mind which you have reason to believe still apply even if the DA is cold? It would seem a common attribution of byelaws that A will only apply if condition B is met. If so, there would be no obligation, because they wouldnt apply? For example, there is a byelaw that prevents access by land to the site whether the site is hot or cold, but this only applies to land access, not overflight, so I would follow your point if you have any specific examples in mind to overflight such as that?

The answer is very clear, and also given on the above mentioned CAA website on DAs.

Unauthorised entry into many DAs is prohibited within the Period of Activity of the DA as listed at UK AIP ENR 5.1 by reason of byelaws made under the Military Lands Act 1892 and associated legislation.

Also, being charged under the UKs
„endangerment clause“ would not make sense, since the danger cited for danger areas is danger TO the aircraft flying within it, not deriving FROM it.

I think that a mid-air with a Typhoon, or being hit by an artillery shell, is a bit dangerous

I once contemplated crossing one when I had a radio failure near dusk. I could see my destination airfield, but the ceiling of the danger area was at or very close to the base of controlled airspace. I didn’t have a transponder (an old C152, not my Turbulent). Going through the danger area seemed the only legal way, not to mention the most sensible way, of getting wheels on tarmac prior to sundown. There were other options available, but none seemed better.

Eventually I discovered that if I plugged my headset into the passenger socket and used the PTT button on the right hand side yoke, I could use the radio again. Had I not managed to do so, I think I would have crossed it near the ceiling. Reckless? Perhaps, but an airliner could have legally crossed 10% higher carrying hundreds of people.


endangerment clause“ would not make sense, since the danger cited for danger areas is danger TO the aircraft flying within it, not deriving FROM it.

Endangerment under ANOs is endangering an aircraft or people on it.

I think that a mid-air with a Typhoon, or being hit by an artillery shell, is a bit dangerous

I don’t think this is too realistic.

If you look at the size of the typical UK DA, it doesn’t add up.

The operating radius of a Typhoon is more than a few nm. Well, not much more but you get my drift

The distance a shell travels is also considerably more; of the order of 20nm. Obviously you can make them fall a lot closer by pointing the barrel more vertically up but then the thing goes up to about 20000ft and few DAs are that high; also most artillery cannot be elevated that high.

So I think most “gunfire” in these ranges is going to be target practice, with no significant elevation (well below 1000ft AGL).

Endangerment under ANOs is endangering an aircraft or people on it.

Do they have to prove actual endangerment?

I wonder if this discussion of UK DA legality should go into a new thread? OTOH this issue is valid everywhere outside the UK too. French DAs are fiercely guarded. Can anyone from e.g. France comment?

It would seem to be a different topic.

I saw this poster yesterday. Does anyone know of any fatal or serious accidents caused by airspace infringements? Of course, this is the kind of question which in aviation circles could easily get the sort of outraged, blustering response that Timothy described. 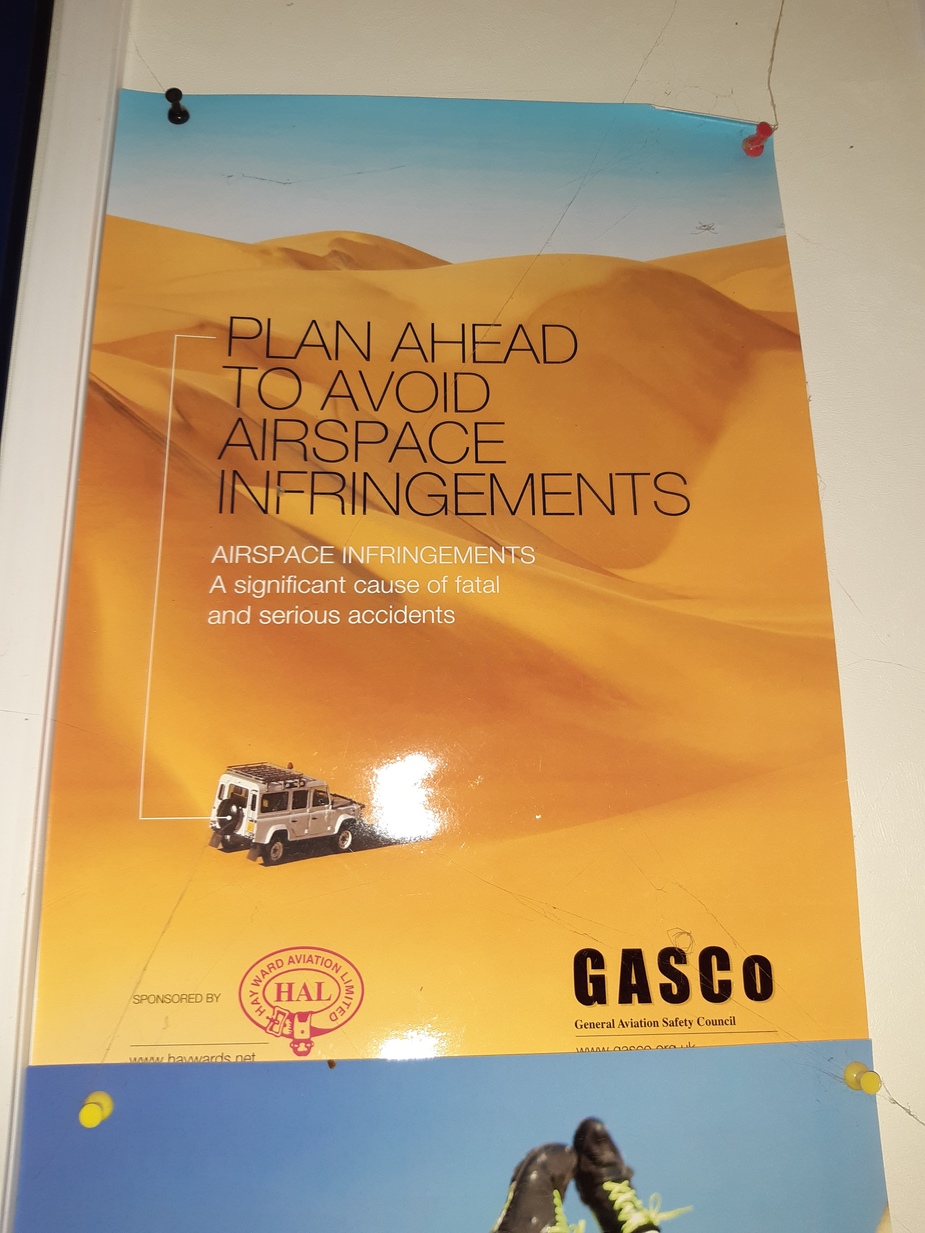 It would almost certainly infringe advertsing standards in any other arena, as there is no evidence what so ever to support the claim.

We are talking about infringement action being taken against people who fly into Danger Areas. A starting point is whether doing so is legal.

We can’t really separate that from whether it’s stupid.

But it also raises, slightly tangentially, the whole question of Policing by Consent. If there is a view that some/many Danger Areas are not really dangerous, then of course people will infringe them, just like people break other rules and laws that they don’t think make sense.

Timothy
EGKB Biggin Hill
3034 Posts
This thread is locked. This means you can't add a response.
Sign in to add your message