Maybe something like that exists. You charge it at home once a month and connect it to the plane to keep the battery fully charged …

You could do it… it is the same issue as any power transfer situation. You can buy a 12V or 24V to 230V inverter for various prices according to the desired quality.

If the charger is trickle charging at say 0.3A at 27V that, assuming 80% inverter efficiency is about 7W which would draw 0.4A from a 24V battery and if you use a typical Concorde 15Ah one, it would last 37hrs.

So, not really practical to do this with a single battery as the power source. Even if you reduced the current to 0.1A, the numbers are still not good.

With a big solar panel, say 1m2, it would be a lot better. My GF’s mum had a crappy car (Merc A-Class) which is notorious for drawing a lot of current all the time (crappy central locking etc) so after a few days you could not start it. We pretty well solved that with a solar panel which was about 30×80cm.

However, the output resistance of a solar panel is so high that you could connect it directly to an aircraft battery and provided you current limited it to say 0.3A (in case the sun came out, when solar panels can produce a lot of current – I used to fly with a roll-up one 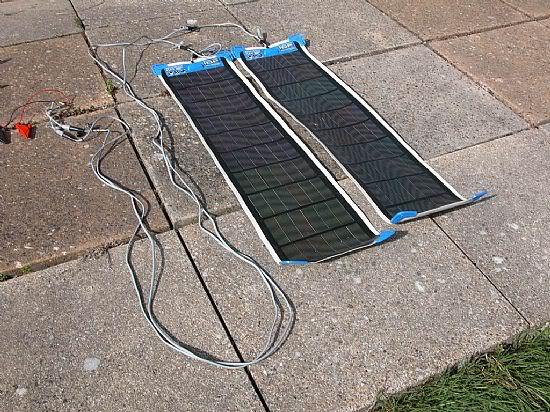 which in sunlight could power a 25W 24V soldering iron!) you would not need anything else. Those concrete slabs are 60 × 60cm (for an idea of scale). The no-load voltage of that panel is about 50V.

This stuff is very relevant in the UK where a hangar with “services” attracts a lot more in business rates. So, no toilet (a funnel screwed to the wall, with a tube running outside) and possibly no electricity (use a solar charged battery for the lights etc).

If you really wanted to use the branded product “Battery Minder” (there is a US one, and a German one which is 1/2 the price which I have) then you need a 230V supply, of course.

) whose internal batteries add up to 12V or 24V, and power it from an external car battery. Or a 24V Concorde or Gill aircraft battery which failed the load test; such batteries, especially Concorde, are still almost perfect at the load test fail point. But the above power considerations will still apply. And UPSs are not very efficient.

I have been using the CTEK 4.0 charger on my Concorde 24V battery.

It works great and does improve the battery capacity, though if the capacity is close to max (mine measured at 90%) the improvement is difficult to measure without a proper energy (integration of VxA) measurement.

However I found that during the “reconditioning” phase, the battery voltage climbed up to 31V. This is astonishing because to get a 24V battery to show 31V across its terminals, the current going in must be huge – hundreds of amps, and the charger is clearly not doing that. It is doing some kind of pulsing algorithm which fools the battery chemistry. Anyway, it doesn’t seem to do it any harm.

I use my CTEK nowadays only on my aircraft. (the car is not compatible)
For my unimogs and other vehicles I use Ca/Ca batteries. They have a different end-of-charge voltage of 14,4V and not with 13,8V, so the AGM option is turned on.

I had to replace battery several times on my DA40 due to winter discharge leading to capacity loss.
I now have a CTEK plugged in the cigarette lighter whenever airplane is in hangar. All switches can be off. Battery capacity test was OK during latest annual service.

My Extra came with a CTEK charger from factory. Also always plugged in.

Very happy with their products.

Just got this reply from CTEK

Sorry for a very late reply.

I will do my best to give you adequate answers.

Nice to hear that our MXT 4.0 charger is popular in the aviation ground maintenance.
The RECOND step uses a higher voltage limit than the BULK and ABSORBTION step in the charge cycle
but with a limited time and current.
This will restore the battery capacity by even out the charge level between the battery cells by slowly top filling.
To be able to do this the voltage is limited to max 31.2V. The battery is protected
from damage by the fact that the charge current and the time is limited.
It is recommended that the battery temperature is be between +15 – +25degC for a efficient RECOND procedure.

I wonder what “top filling” is? Nothing comes up on google.


I now have a CTEK plugged in the cigarette lighter whenever airplane is in hangar. All switches can be off.

I have to admit to being confused by this statement. Do you mean that the battery is being charged/maintained via the cigarette lighter socket even with all switches off? How can that be please? I would love to do the same in a C172 but do not think it is possible?


I have to admit to being confused by this statement. Do you mean that the battery is being charged/maintained via the cigarette lighter socket even with all switches off? How can that be please? I would love to do the same in a C172 but do not think it is possible?

Yes, just as you say. I can’t properly explain it, because I’m not an electrician. My airplane hasn’t been modified AFAIK.
Here’s DA40 electric diagram . Maybe this helps.

The answer to whether the battery can be cigar lighter charged is aircraft dependent, and probably aircraft serial number dependent. For example on mine there is no connection to the battery at all, and one would have to install a connector, with suitable protection with a fuse etc.


Yes, just as you say. I can’t properly explain it, because I’m not an electrician. My airplane hasn’t been modified AFAIK.
Here’s DA40 electric diagram . Maybe this helps.

On the DA40 the cigarette lighter is powered all the time, even with the master switch off. Don’t forget to unplug any consumer when leaving the aircraft!

Aviathor
LFPT, LFPN
38 Posts
This thread is locked. This means you can't add a response.
Sign in to add your message