LAPL and extension to a new type

I believe we had discussed this mater here already but can´t find any trace of it.. I was providing PPL/LAPL ground school on Saturday and got question on LAPL and flying a different type. My immediate answer was “you need to do a training plus checkride with examiner”. After doing some internet research later I am not 100% sure any more – especially reading FCL “limited to the class and variant”. Why they mention class? and some people are of an opinion “different model” means a different aicraft within the SEP – which I am not buying at all.

My understanding is as follows – do you guys share it or am I completely off? 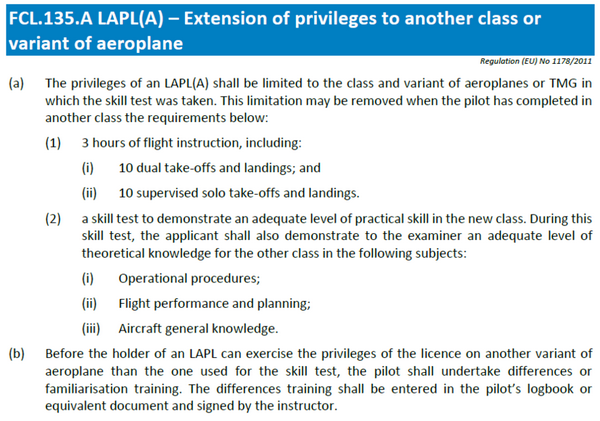 My opinion:
Class: aeroplane (single engine piston), TMG.
If you have taken the skill test in a C172, you have to familiarize yourself with a PA28 before flying it. You don´t necessarily have to fly with an instructor (although it makes sense in many cases) and it does not have to be documented in your logbook. However, if you want to fly a G-109 afterwards, you´ll need to do 3 hours of training, including the mentioned 20 landings, plus a skill test in the new class (TMG).

Variant: You need following endorsements for other variants: fixed vs rectractable undercarriage (RU), EFIS vs steam gauges (EFIS), SLPC vs throttle&prop control (SLPC), tailwheel vs. tricycle (TW), pressurized vs. non-pressurized (P), turbo vs non-turbo (T).
These require differences training which has to documented in the logbook. You´ll need as many hours as you need, and you don´t have to take a skill test for every variant. If, for example, you change from the C172G to a steam gauges C172SP, you only have to familiarize yourself. Moving to a C172RG you need the RU endorsement (after your differences training), for flying an XP you need the VP training and endorsement, on a G1000 SP you have to be EFIS endorsed.

Yes, our ECAA treats it exactly as @Caba wrote, you need endorsements for RU,VP etc, but not for different airplane in the same class.
The endorsement does not require ATO , simple signoff by FI is enough.

are you folks speaking about LAPL or PPL?

Since you mentioned FCL.135.A LAPL(A), my answer referred to that. For the PPL it´s very similar, but getting a new class rating (which you technically don´t have on a LAPL) requires a training course at an ATO (or DTO, as per the new version of FCLs)

moving between SEP and TMG is clear – 3 hours+check ride. What I am not getting is space between (a) and (b). By (a) you move between “class” and by (b) you move between variants of aeroplane. So I am missing there how to move between aeroplanes. They mention limitation to class and variant in the first sentence of (a) but on the third line of (a) they do not speak about the aeroplane anymore, only class.
BTW, to get a new rating into PPL (like getting SEP into your PPL/TMG can be done also in DTO/CRI/FI but this is not related to this topic


My understanding is as follows – do you guys share it or am I completely off?

I think you are completely off. :-)

FCL.135.A(a) states: “The limitation may be removed when the pilot has completed in another class the requirements below”

A PA28 is the same class as a C172, so the 3 hour training in another class can’t possibly be relevant. It would make no sense if the pilot actually had to train for another class (TMG say) in order to fly a different aircraft in the class (s)he trained for the license (SEP(land), say)!

I feel that the LAPL paragraphs are poorly phrased. “Variant” should really be “model or variant”, in which case FCL.135.A(b) applies. The LAPL part was written long after the PPL/CPL/ATPL parts and I think the author didn’t really consider the phrasing used in the other parts.


are you folks speaking about LAPL or PPL?

LAPL. As a LAPL holder myself, and after my SEP(A) checkride where the examiner held the similar theory,(that I would need signoff for each new type) I went to ECAA to get my license and asked them about it. The answer was very clear- the LAPL(A) is valid for all SEP( LAND) (under 2ton),provided i have the necessary differences training.

Thanks for confirming this, Ivark.

I don’t k know why folks keep repeating nonsense about LAPL being a useless rating and all that, the majority of private pilots never need more privileges than LAPL gives them, namely flying any SEP in VFR conditions under 2 tons and with no more than 3 Pax.

The only reason I went straight for the PPL is because I could, but I’ve never flown a flight that would not have been possible in a LAPL…

They do? The only question in my mind is if in practise enough people manage to get the LAPL in the minimum amount of hours.

Airborne_Again
ESKC (Uppsala/Sundbro), Sweden
21 Posts
This thread is locked. This means you can't add a response.
Sign in to add your message

Interesting new option: converting EASA SPL licence to LAPL or PPL
Hello and Should I Finish my PPL?
Who wants an LAPL?
Anyone with an LAPL(A) here? SEP validity for LAPL(A)