An interesting case so I am posting it.

An A&P friend of mine bought a Cessna 210 Turbo for next to nothing after a catastrophic engine failure. It was a cat in the bag type of purchase after the following description:

Shortly after take-off level at 1,000', pulling minimal power(it was a local photo flight), all at once, the engine went to full 2,700 rpm, a loud metallic grinding noise was heard from the engine and the prop control cable popped out to the full aft position. The pilot turned around, dropped the gear and was able to land with the engine still running.

The oil pressure remained in the green throughout the event and the pilot was unable to push the prop control back in until after shut down.

Post flight inspection : No oil leaks and or crankcase distress. Engine rotates freely by hand without making any unusual noise and all 6 cylinders have compression. The turbo turns freely, the oil filter was opened and about a half teaspoon of fine metal shaving were found. The prop governor was removed and there was no metal found in the screen but the shaft cannot be rotated by hand.

When he split the case of the engine, there was a big surprise: 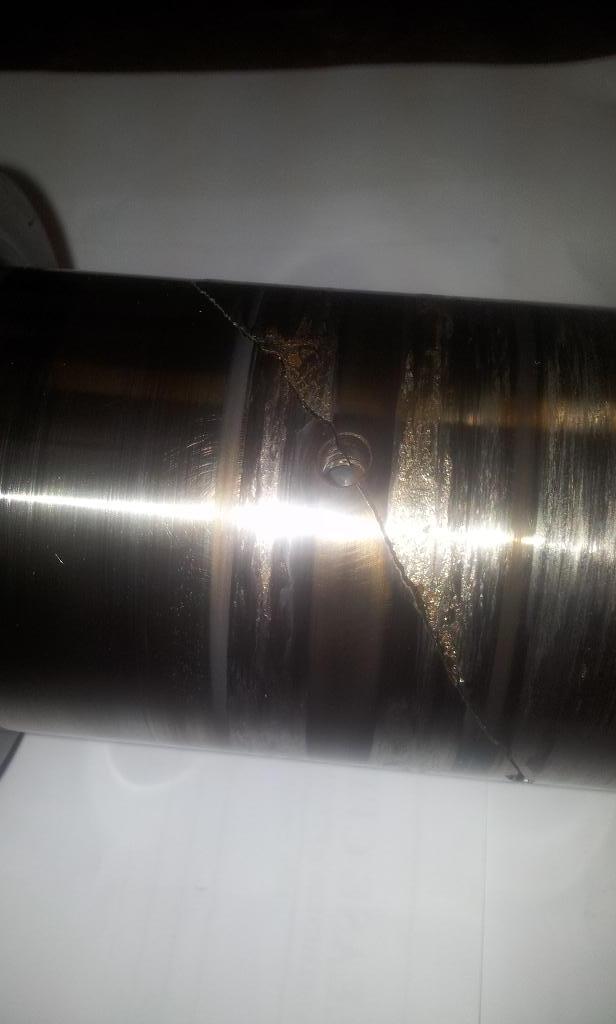 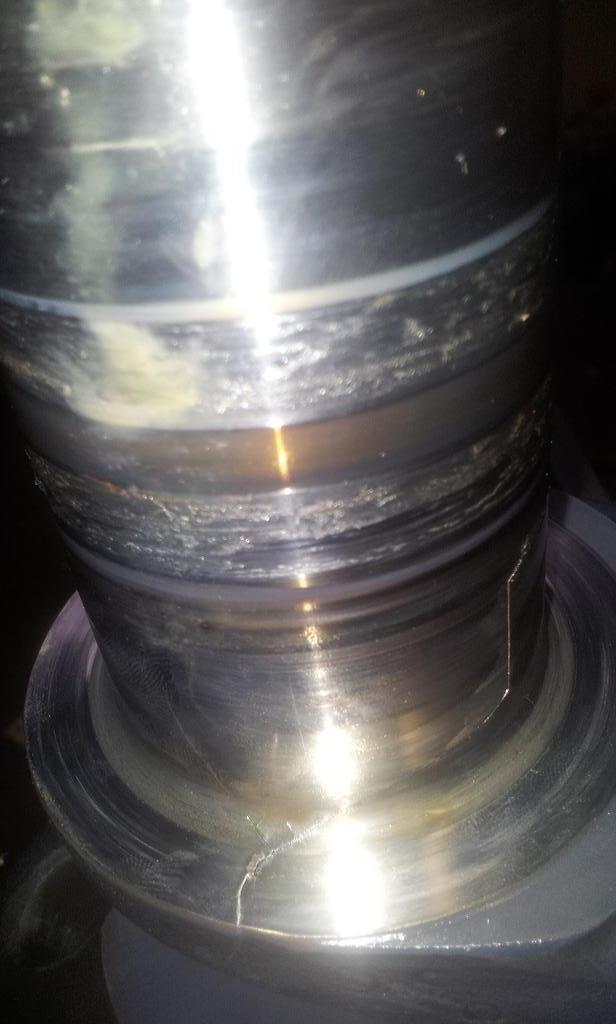 A broken crankshaft! That is very rare and the guy got lucky that he made it back to the airport. He started investigating how that could have happened. From the logs he found this:

Now his theory is that 50h after the new engine was installed, the aircraft suffered a prop strike. A new prop was installed but no shock load inspection was performed. The engine ran another 1000h trouble free after which the prop was overhauled. The new setup probably was less balanced or created different harmonic vibrations which made the crankshaft burst in only 76h.

Prop strikes are serious, whenever you buy an aircraft, make absolutely sure that it was adequately dealt with. This case is rather spectacular but I bet there are lots of aircraft out there where "minor" prop strikes where covered up. Saying "nothing has happened in 1000h" will obviously not protect you.

No reason is given for the prop change.

Different engine v. prop hours is a dead giveaway and needs a gold plated explanation. If none coming, it's a prop strike.

When I had my prop strike in 2002, the CAA licensed engineer said he is entitled to countermand (not require) a shock load inspection if the prop didn't stop rotating. This was despite the last 10-15mm of each blade being bent over. He was going to cut 15mm off the end of each blade. It would have been legal...

The Hartzell procedure (in the relevant Service Letter) was tightened up after that, but they also introduced stuff like the hub has to be scrapped (NDT is not acceptable) if more than 1 blade has to be removed for a repair. The hub was £2500 so basically any real strike means the whole prop was scrap. It is a good money generation procedure. This, together with normal practices in that era and in preceeding years, would probably lead to a lot of strikes being "deal with quietly".

What is difficult is a strike into soil. That probably won't mark the blade(s) but happens often on grass. A lot of people think this is a grey area.

But you are right crank breaks are very rare.

Very timely as I've just suffered a light prop strike and am taking the engine out tomorrow for shock load testing. I'm pretty sure that nothing will be found but there's only one way to know for sure.

Very sorry to hear! What happened?

the CAA licensed engineer said he is entitled to countermand (not require) a shock load inspection if the prop didn't stop rotating.

Unbelievable. Every time a prop hits anything a bit more solid than air, it needs a shockload inspection. No ground can be so soft to avoid it. That theory is very stupid. My prop didn't stop turning and left only 6 marks on the tarmac, but was a an inch shorter and the crankshaft had cracks after that.

Every time a prop hits anything a bit more solid than air, it needs a shockload inspection

That's generally the line taken in printed service letters nowadays but there are still obviously going to be shades of grey.

Say you chopped a little 0.1kg bird (not a 20kg goose) in half. Not a mark on the prop. Would you shock load inspect? Most wouldn't.

In the past, very different attitudes prevailed...

In the past, very different attitudes prevailed...

I know. I flew a C182 out in 1997 after a prop strike. It overran runway and ended up in a ditch. Just put a new prop on and flew the plane to maintenance base.

Different aircraft engines have very different records when it comes to tolerating prop strikes. Those with moveable crank balance weights are apparently particularly prone to damage. Others, like small Continentals, have a 60-70 record of relative tolerance assuming they dial-in OK - when they are stripped and inspected they are rarely damaged. Particularly when fitted with wooden props, it was standard practice on those engines for a long time to replace the prop and move on. As with other facets of aviation, as people with long experience have passed from the scene, things have changed.

My Falco is fitted with an IO360 so has a hollow crank. I was taxiing back towards my hanger on the grass and was forced to make the transition from grass to concrete at right angles due to parked helicopters obstructing the apron. I was nervous about doing it and slowed the aircraft right down but Sod's law dictates that the only depression in the sub-soil along the whole length of the apron is one that is about 30cm long, 15 cm deep, obscured by the grass and right in the centre of the gap I was forced to go through........ Only two witness marks on the concrete but the tips were reduced by about 5mm an bent back by about the same. Still, I removed the engine and prop today and they'll be off for inspection at the right places tomorrow. Insurance will pay, hopefully.

That was exactly what happened to me in 2002.

Grass to concrete, the last bit of the blades getting bent.

We (2) didn't notice anything but somebody heard the ding and called us on the radio.

Insurance paid up with no fuss whatever.

The plane had just 1 hour on it, from new

The RHS was an instructor (I was having my differences training) whose immediate comment was "I am glad I wasn't in charge".

Total £20k. They didn't find anything on the NDT. New prop (£11k) and the usual stuff, including stuff like prop governor overhaul. It was done by the now defunct CSE Oxford. To preserve the Lyco warranty we had to go to a Lyco distributor.

Peter
Administrator
Shoreham EGKA, United Kingdom
90 Posts
This thread is locked. This means you can't add a response.
Sign in to add your message