I am still gathering experience in flying IFR in the Eurocontrol system with my enroute IR. Yesterday, I filed a flight plan with an almost silly short IFR part: LSZG N0119F100 BENOT IFR N869 VEROX VFR LSZG
The goal was to just get into the IFR system a bit and building routines. 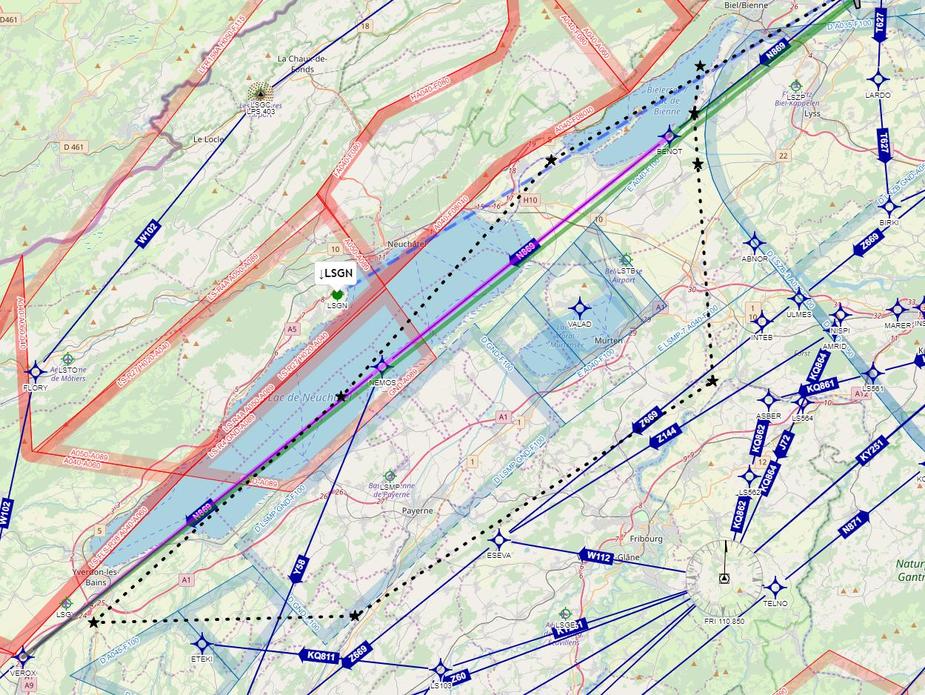 I am wondering…
Why are so many airways one-way? Why are directs not possible to be filed?

I would’ve liked to file a plan such as BENOT VEROX ETEKI KY251 etc. However, this was not possible due to all these restrictions. Annoyingly, or gladly, in the air it seems to be no problem at all. As ATC didn’t even look at my filed route, they asked me what I would like to do. So I requested “direct FRI, then VEROX – NEMOS” and that was cleared by ATC with no questions asked.
So, what is the problem here? Is the European airway and waypoint system so ancient that no directs are allowed to be filed?

Most importantly though: Is there a push from EASA to improve the airway system for light GA in Europe? I think that would be an important rulemaking task, for me personally at least.

My lesson learned for the moment: Just file a random file plan and figure out the rest in the air (of course, I will always try to fly as filed, but you get the point).

Welcome to European IFR flying! While I can perfectly understand that you are puzzled by these seemingly countless, random and – at first glance – unworkable restrictions, be assured that they don’t have much relevance for practical IFR flying: Use your preferred routing tool, find and file a route that is within the capabilities of your airplane and is closest to your intended path of flight. Everything else can be sorted out in the air. My IFR flights very rarely have more than a 10% overhead (unless terrain is a factor), and that is true for the planning stage, but even more so for the actual routing.

An A-to-A-training flight like your example above is in fact something the system does not cater for very well, but, as you have seen, once airborne this is rarely an issue and you can negotiate whatever training programme you want.

Is the European airway and waypoint system so ancient that no directs are allowed to be filed?

Directs can be filed, but are subject to various restrictions in most areas. This can be due to Airspace structure, restricted areas, radar and radio coverage, ATC sector boundaries and others.

Most importantly though: Is there a push from EASA to improve the airway system for light GA in Europe? I think that would be an important rulemaking task, for me personally at least.

Some countries like Austria have changed to FRA (Free Route Airspace – which comes with its own planning idiosycrasies), but to me it seems you are overthinking this. Get some experience and you will quickly discover how IFR makes your life so much easier than VFR, especially on long flights with complex airspace etc. Apart from some silly altitude constraints the European IFR system is very accessible for light GA.

Thanks for your reply. Yes, I should probably get used to negotiating routes directly with ATC when in the air. Not a bad option actually. I just think it would be less workload for pilot and ATC, if one could file with less restrictions and thus fly what is filed.
I’ll do more flights to Germany, France and Austria next. Switzerland is just too small for IFR flying. I just can’t be that spontaneous because of customs.

Europe has no need for the complex flight management system which it has. The US manages without it, for example. Europe does have some busy airports but the traffic there is managed tactically by manual radar separation.

I think the simple answer is that a lot of technocrats have been let loose on writing a ton of code, and they devised the most complex possible technical solution for it

The then head of EASA told me about 10 years ago that they have the same problem with Eurocontrol as everyone else. He said EASA might generate 500 pages for some proposal (which itself is an indictment of European rulemaking) but Eurocontrol generate 5000 pages and you need a trolley to move it.

The solution to this first appeared in 2008 when two software tools were developed – Autoplan and Flightplanpro. Both of these are now gone, but there is the Autorouter, Rocketroute, and Foreflight is developing something which will hopefully do the whole European autorouting job too.

These tools allow you to generate a valid route which you can file and then you negotiate with ATC for shortcuts. Occassionally, not too often but often in certain places, the filed route is ridiculously long and then some tricks have to be used. Also see the “related” links at the bottom of this thread.

However the tools also generate routes which you never fly. A favourite one is the Autorouter generating routes which are nonstandard (on local ATC policies) while still fitting inside the width of the airway or the size of the CAS segment. This would typically happen across say Belgium where the Autorouter would produce a very “clever” route, using waypoints nobody had ever heard of, which everybody thought was clever because it was a few nm shorter than the other tool, but when you turned up on the KONAN-KOK route into Belgium, the ATC there would ignore it and give you KOK-LNO which is a standard airway route across Belgium

I have heard that Eurocontrol routing approval is at least partly based on rules provided to it by the various countries, implying that Skyguide is at least partly responsible for some of the Eurocontrol routing restrictions. This may be on purpose, knowing that they have the flexibility to give you more freedom in the air as implied by the comments above. Try routing from Grenchen LSZG to Salzburg LOWS. I tried that from Speck LSZK (a VFR airfield for the forum) to Salzburg LOWS and Autorouter gave me LSZK N0119F090 KUDIS/N0119F090 IFR N851 ROMIR T125 ZUE Z601 KPT L856 MANAL/N0119F080 L856 TRAUN TRAUN1R LOWS. It looks like this on the map:

This tells me that DCT (off-airway) legs within Switzerland are not allowed at all, which must be a Skyguide restriction. On the other hand, I’ve regularly been able to get direct routings once airborne.

As an aside, Skyguide and Austrocontrol were rather close with their Homebriefing program, but seem to have had a falling-out. Too bad, because the Austrian FRA would have some real advantages in Switzerland. One of them is RNAV SIDs for VFR airfields, allowing access to the IFR system much lower than needing to climb VFR to an MVA which around Zurich is often 6’000ft ASL (e.g. Wiener Neustadt LOAN, Voslau LOAV)….. but that’s for another thread.

Yes these restrictions, like most Eurocontrol rules, come from the country in question. MAXDCT=0 is a rule intended to prevent “creative routing” and we probably see more of this stuff since the success of the autorouting tools… When I first started flying IFR, 2005, the only MAXDCT=0 country was Albania!

Many previous (old) threads by ATCOs saying how unhappy they are with the Autorouter filing directs, which cannot be flown, etc…

If the “illegal” borders being thrown up between EU Schengen (free movement of people) countries is any indication of the general direction, this could get worse before it gets better. Of course a distinction needs to be made between routing intra-country and cross-border, but this shows how FRA has a very slow take-up.

BTW, does anyone know of a web site showing which countries have implemented PFA or perhaps have a list? Austria and Hungary come to mind. I seem to recall that some Eastern European countries have an on-going group cross-border project in this area (Hungary, Romania, Bulgaria, Serbia, Croatia(?)).

Sorry for the thread creep.


BTW, does anyone know of a web site showing which countries have implemented PFA or perhaps have a list? Austria and Hungary come to mind. I seem to recall that some Eastern European countries have an on-going group cross-border project in this area (Hungary, Romania, Bulgaria, Serbia, Croatia(?)).

From a GA point of view these charts paint too rosy a picture. E.g. Sweden is shown to already have FRA H24, but “might be level restricted”. Indeed, FRA only applies above FL285!


From a GA point of view these charts paint too rosy a picture. E.g. Sweden is shown to already have FRA H24, but “might be level restricted”. Indeed, FRA only applies above FL285!

they used to send when some changes were implemented.

Emir
LDZA LDVA, Croatia
19 Posts
This thread is locked. This means you can't add a response.
Sign in to add your message

Free route airspace in Czechia
IFR outside airways in Italy
IFR outside of airways.
Chances to be granted "direct" by ATC Spain for enroute IFR