Hi! On our trip from Mallorca to Scotland next week we are planning a stopover in N France. We need Schengen, customs, AVGAS , reasonable fees, a good lunch and hopefully some relaxing scenery. Ideal if also IFR.

Looking at the great circle routing, and having been there a couple of times, LFRC Cherbourg seems good (will the restaurant still be open by then?). However, Eurocontrol IFR routings North out of LFRC are terrible and circle you west to Ireland adding over 100nm to the routing. I also do not want to venture VFR for a later IFR pickup on a better routing since this is apparently difficult in the UK and also more wx-restrictive..

Looking at Le Touquet LFAT or Calais LFAC, Eurocontrol routing to Scotland is much more direct (via LYD or DVR). LFAT seems ideal but apparently loads of Brits flood it at lunch time and I would not want to miss my slot while waiting at the long refuelling queue…is this a problem during the week?

Calais seems to have less traffic but I an unsure if the on site restaurant is now open…Worst case we could take a taxi at either LFAC or LFAT for lunch, but we are 5 POB which sometimes does not work for one taxi.


is this a problem during the week?

Did you looked at Deauville?

For some ideas on crossing into the UK from France, see here

Le Touquet LFAT is fine. No PNR (due to 24/7 police) and everything “just works”. I have even heard French pilots say it is the best airport in France

The airport doesn’t get flooded with Brits except after about 11am on a weekend, but I have never had problems getting parking. Fuel I cannot speak for; have rarely done it. The town is just a 20 min walk which is really pleasant, along the woods.

Deauville LFRG is fine too. There is PNR.

Cherbourg LFRC is fine too but the PNR is previous day.

Hmm… I once had an infamous experience ten years ago at LFRG when we could not refuel due lunch, then after lunch there was long queue of aircraft waiting to refuel and by the time it was our turn they run out of fuel…we ended up having to overnight enroute back home…wife never forgot!

regardless, Eurocontrol always seems to provide the weirdest routings when departing from/arriving to airports on the west side of the Channel… Were it not an FIR boundary I would expect a shortcut, but we have been there, tried it and failed miserably in the past. I really dont know whats between Autorouter, RR and Eurocontrol in this part of the Channel…

But yes, other than that Cherbourg should work if the restaurant is open…were they not closing?

We will be departing at airfield opening 0815LT from LESB so arriving around lunchtime at any of those places.

My post above shows a way to solve the routing issue.

The Autorouter-generated routings are mostly not operated by ATC in this area.

The reason for these overheads is that Britain essentially only has one continuous north-south lower airway (which is because lower airways are created sparingly because they disturb the VFR crowd and are not needed by most of the CAT, which is flying high altitude airways anway; the exception being the commuter airlines flying to the Channel Islands etc.).

And that one single airway connects (broadly speaking) London and Glasgow. The UK enroute low altitude chart makes that very obvious. Hence, if you insist on flying the enroute part 100% in controlled airspace (and if you tell the autorouter so by checking the “use UK preferred routes” option), then the autorouter will first take you – wherever in Northern France you depart – to the London area, so as a intercept that airway.

So yes, if you want make it easy on the routing, use LFAC or LFAC.

Re Le Touquet, well, it has all you want, but it also has the most expensive Avgas of all of France (unless you have the TOTAL card and refuel by yourself, then it’s rather cheap). Btw, strictly speaking, LFAT customs requires PN, but with only 2h of leadtime. LFAC is a dump.


My post above shows a way to solve the routing issue

Thx! I read the 10nm-direct.trick and that may be the way to get a direct filing, but that does not guarantee success…as we experienced a couple of years afo from EGGD to LFRC after filing a nice EC-cleared route but we ended up flying over twice the distance (same part of the world) LFAT customs requires PN, but with only 2h of leadtime

I have asked the police at LFAT a number of times about this and they don’t need it because they are always present.


The reason for these overheads is that Britain essentially only has one continuous north-south lower airway.

Hmm, that explains it. it is also worth considering what Peter sais about climbing through the London TMA…not happening.

I tried upper airways from LFRC and sure it si abetter route though th UK, but it still adds the besty of 70nm at the start of the trip , grrhhh! 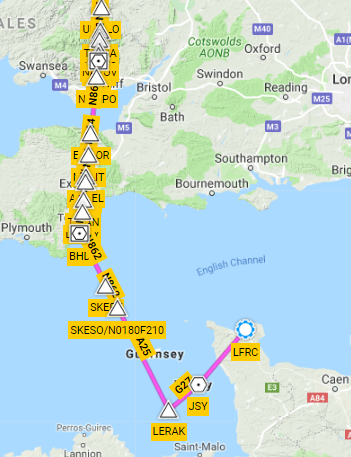 I do have the TOTAL card, so perhaps on a Wednesday/Thursday, LFAT is an option after all…

Antonio
Antonio
LESB, Spain
21 Posts
This thread is locked. This means you can't add a response.
Sign in to add your message