Has the UK CAA allowed any A-to-B charter AOCs in any single engine planes?

Over “60min in extended water” it will be tricky to get one, especially with night & imc

From the press the pilot/aircraft are well known by the team members and manager and the flight does seem like the private “friend & family” category rather than bizjet commercial charter?


From southern UK to Jersey you are certainly on radar the whole time. London Control see you a long way over France, and Jersey Radar takes over once inside the C.I. airspace.

Yes but if this guy was flying north through the Jersey Zone at 5,000ft (and later 2,300ft) then he clearly wasn’t on a flight that would have involved London Control.

The London Info FISOs can see a radar screen, and I’m sure if mid-channel traffic working London Info called Mayday then the FISO would be all over the radar display, qualified or not.

Being ‘on radar’, i.e. traces will be obtainable for the accident report, is very different to being able to obtain a radar service. If this guy was crossing the channel beneath Class A (which seems likely) then once Jersey Control dumped him at the zone boundary he’d have been on his own or with London Info until he got within the published range of Exeter LARS. Even Exeter might have gone home by that time. Mon-Fri 9-5 he would have been able to call Plymouth Military and get a radar service all the way across.

To divert into a mini-rant, I think it’s awful that the radar coverage exists but that so many light aircraft have to cross the channel without a radar service. It’s a shocking indictment of the way the UK air traffic control system is set up. It is also very poor that Class A airspace forces you down to a much lower level that you’d rather be at.

I’m into massive speculation now, but I’m going to build on my assumption that he was not on a EuroControl flight plan because he was so much lower than you’d expect for the aircraft type, or than would even be compatible with a EuroControl flight plan. If you plot the route LFRS-BRILL-OTMET-EGFF then it gets you on a reasonably direct track which minimises the over-water time (short of going further east and crossing at Cherbourg) and means that for a lot of the first half of the channel crossing you are in range of one of the three main channel islands. I’m trying to get inside the head of someone planning that route, and that’d be my thinking. When I’m planning cross channel I want to keep the route reasonably direct (otherwise we’d always cross Dover-Calais!) but at the same time minimise the time I’m out of gliding range of land. He could have just planned LFRS-EGFF direct with no intermediate waypoints, but it’s a longer water crossing and the only island really in striking distance is Guernsey. People also like intermediate waypoints, or I do anyway, they are useful as a progress check or when giving a position report. Via BRILL and OTMET he doesn’t add many track miles and brings the other two islands into play, as well as making landfall sooner (Weymouth) on the other side.

For me the real clue that suggests this was VFR (or IFR outside Class A with pop-up IFR through Jersey Zone) is the fact that the point at which the aircraft vanished is really quite close to a direct track between the airports – which is what every pilot flying OCAS is ultimately aiming for, the considerations above notwithstanding. I don’t fly EuroControl, but understand that perfect direct tracks between departure and arrival airports are not a feature…

If the reg can be posted, any ATCO anywhere can tell us what the flight plan was. In fact there may even be a way to get it via AFPEX, though perhaps not so long afterwards.

Just as a single data point, when I flew southbound, VFR (with FPL of course) at FL075,

I have a video of this flight so I’m sure

In my opinion its unlikely for a SET Meridian to be flying that low either privately or AOC.

At low altitudes the fuel burn is truly awful and the speed unremarkable. The main benefit of the Merdian over the piston varients is the effortless high altitude operation and the associated weather/icing avoidance and uplift in TAS with altitude.

Just no reason to fly low especially over water. The Meridian with prop feathered has a 17:1 glide ratio and at FL200 gives 50+ miles glide. I personally find this a reassuring feature over water like here in mid-March. 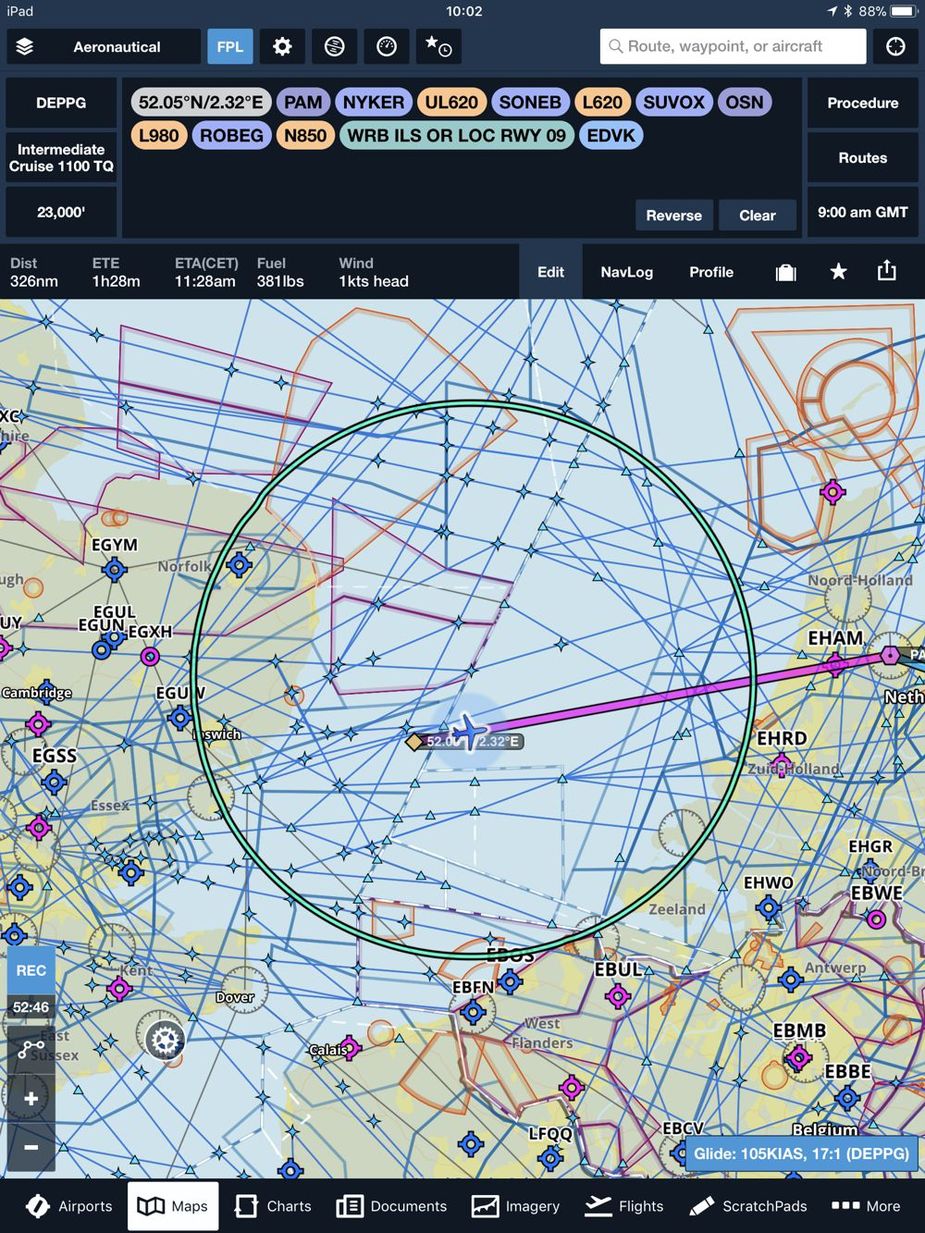 The latest info (from sources who usually know something) is that it was a piston PA46, on the N-reg, owned by the Cardiff City FC Chairman, and flying VFR. The pilot has also been named.

Icing (boots overwhelmed) is said to be the cause. Consistent with the conditions at the time and the request to descend from 5,000 to 2,300.


Just as a single data point, when I flew southbound, VFR (with FPL of course) at FL075,

That is good to hear. I have flown EGTE-EGJJ once before, some years ago. The route was fairly direct and I cannot remember how long Exeter Radar kept us but I don’t recall being particularly unnerved so perhaps it was similar to your experience.

Exeter are clearly going a little above and beyond. I have always found them to be good and very helpful, probably because they don’t get as much traffic to keep them busy as other LARS units do.

@Jujupilote, I understand Exeter (you are OCAS they like to dump you anytime you get out of their ATZ) but not Jersey tough (they have a huge class D around), also in the UK there is a bit of push to give more for revenue generating pilots, I am not one of them

but even for VFR you have to be ready with few excuses to keep the same sqwak, ask for handovers….

On the way out Exeter did me a VFR OCAS handover to Newquay, with all flight details and transponder, I just asked and it worked, coming back while IFR OCAS a handover did not work?

This is completely different from my experience in France where you get a radar contact/service from an FIS 200km along the way for free !

According to Flightsafety register is N264DB.


@Jujupilote, I understand Exeter (you are OCAS they like to dump you anytime you get out of their ATZ) but not Jersey tough (they have a huge class D around), also in the UK there is a bit of push to give more for revenue generating pilots, I am not one of them but even for VFR you have to be ready with few excuses to keep the same sqwak, ask for handovers….

On the way out Exeter did me a VFR OCAS handover to Newquay, with all flight details and transponder, I just asked coming back, IFR OCAS it did not work?

This is completely different from my experience in France where you get a radar contact/service from an FIS 200km along the way for free !

UK ATC is privatised. If no-one’s paying, ultimately no-ones controlling – with the exception of LARS (subsidy) and the military.

Exeter are better than most, probably because their part of the country is quiet. They have always been very good coordinating handovers for me, in both directions. Always ask, and you usually get – but not from Farnborough, they are too busy. The better ones do it without asking.

Graham
EGLM & EGTN
958 Posts
This thread is locked. This means you can't add a response.
Sign in to add your message