Hello from California and N-reg maintenance in Toulouse

I’m a french engineer, currently living in California but moving to Toulouse in the coming weeks (wife & kids are already on their way). I started taking check rides here in the US in 2014 and then went wandering across the western part of the county with the family in a PA-23.

I’m seriously planning to bring the PA-23 to Toulouse and I’m looking for a patient A&P who could help me maintaining the plane. I did most of the maintenance over the past 2 years as “owner assisted work” with the shop that owns a bunch of STC’s for the plane and I would like to keep improving that vintage twin.

I’m also looking for tips regarding tiedowns & hangars either in Le Muret or even closer to Toulouse – happy to run around and trade advice for beer once I’m done crossing the pond.

Ha, and as they say on another forum, this thread is worthless without pics! You started off with a pretty amazing pic, too.

I’m looking for a patient A&P

I see you don’t believe in restricting the options much

But yes with an N-reg over here, you definitely need someone who you can work with and who can work amicably with the local airfield authorities.

Actually you need an A&P/IA. That is harder to find than just an A&P, but they exist. Fortunately you need the IA only once a year.

welcome to the forum. Aztec is a very nice and strong machine, the only problem, especially here in Europe, is the prohibitive price of AVGAS, recently I paid EUR 3.15 for one liter in Helsinky, which is rather extreme but prices between two EUR something to two EUR fifty are quite common nowadays. As my hungarian friend born in Czech Republic says: “it is a grave for fuel” (direct translation) :-). Another unpleasant thing are the enroute IFR charges for aircraft over 2 tons MTOW, which applies to Aztec too. So I hope that your engineering job is very well paid to accommodate for the extra expenses you are going to face here. Another one is just coming to my mind, you will need mode S transponder and at least one 8.33kHz radio to be able to travel across Europe.

Google provided some panel picture of N34KK so it looks that the 8.33KHz channel spacing is already resolved as your aircraft features Garmin 430, which can be switched to 8.33kHz channel spacing. But the transponder is C mode only so that will need to be upgraded to be able to travel freely including terminal airspaces of big airports, higher altitudes etc. 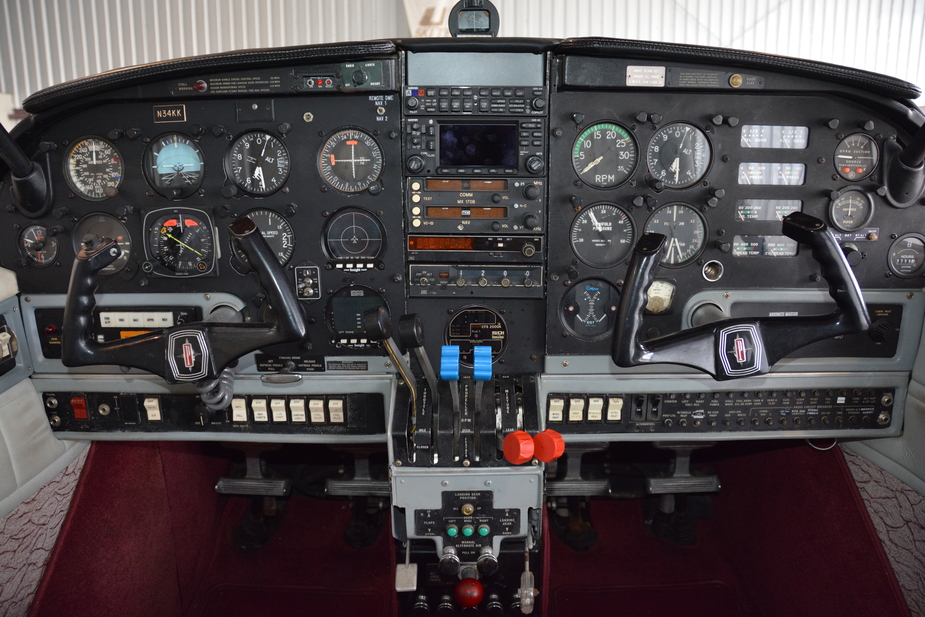 But the transponder is C mode only so that will need to be upgraded to be able to travel freely including terminal airspaces of big airports, higher altitudes etc.

The transponder looks like a KT76A. If it is, then there are plug-in replacements.


I’m seriously planning to bring the PA-23 to Toulouse

Are you aware of the taxes on the aircraft that will need to be paid as soon as the wheels touch down in Europe?


Are you aware of the taxes on the aircraft that will need to be paid as soon as the wheels touch down in Europe?

“As soon as the wheels touch down” is a bit of an exaggeration, isn’t it…?

That’s a 2 years old pic of the panel but indeed the transponder will have to be replaced. It has to go anyways with the ADSB mandate coming up here in the US.

Yes I’m aware about the taxes and all the other costs associated with flying in Europe. The thing is that with 3 kids the Aztec provided the most “affordable” flying I could find, and selling it to get something else in Europe sounds like a nightmare. I may not fully grasp how more difficult it is to jump in the plane and launch for a destination 400 miles away in Europe vs the US, but sometimes it’s good to not read the fine print before jumping ..

The goal would be to fly 2 trips a months or so, not to hit the pattern every day. For that I hope to make some friends at the local airport who need a safety pilot or something :-)


“As soon as the wheels touch down” is a bit of an exaggeration, isn’t it…?

At many French customs airfields, (Biarritz, Dinard, Deauville, etc) the first landing in France with an N registered aircraft, without the correct paperwork, they would have a field day, the aircraft would likely be impounded immediately until all the duties are paid, maybe being a French citizen (?) he could talk his way out of it?

William says that he is aware of the duties, I would suggest that he needs to bring with him to Europe a ‘suitable’ bill of sale / invoice so that there will be something to base the duties on rather than let the customs do a valuation.

quatrelle
62 Posts
This thread is locked. This means you can't add a response.
Sign in to add your message

Recommendations for a French GA insurer please
Bring my N-reg TR182 to France or not?
Toulouse–Blagnac LFBO and Toulouse-Lasbordes LFCL
SIC / PIC job in the Toulouse area on a N-reg twin?