Last Friday I flew from Nevers (France) to Mannheim City (Germany) to attend a fly-in there. On my way to FL230 I picked up some ice in the SR22T/FIKI Cirrus but not unusual and it was relatively easy to keep the wings clean of ice. However, once I arrived at FL230 and cruised there for about 10 minutes or so the Manifold Pressure fell away and remained ‘stuck’ at something like 11.×. Whatever I did with the power, the MP would not move one bit. Basically I lost engine power while stuck at FL230 above some bad weather below me.

I declared an emergency and looked at how to get around the bad weather in my descend and which airfields/airports were around me. Lots of choices and relatively lots of time before meeting the ground.

It took all about 10-15 minutes before the alternate air door opened. Seemingly it was frozen up and only in warmer air would it open up. The alternate air indication showed up on the PFD and later on even went off again as the filter was not clogged up anymore. I could then continue my flying around the weather at 5000 feet.

I assume that the filter was clogged up with ice and that the alternate air door was frozen up and would not open. I thought about a possilble turbo issue, but I don’t think it is related.

I am a little disappointed now in “Cirrus”. You fly this FIKI aircraft that can keep the wings clean quite well, but can’t cope with the air-inlet and ice clogging up the filter there. Of course I am not talking here about severe icing.

Question: how long should it take for the alternate air door to open up? And what to do with the fact that it can freeze up?

I saw that on Flightradar24 as well. Scary when the signal got lost !

Question: how long should it take for the alternate air door to open up?

Immediately. It is held closed by a spring. The engine creates suction through its pistons and if the pressure falls below a certain level, the suction is strong enough to pull the door open.

And what to do with the fact that it can freeze up?

Not good but a general problem with all airplanes, also turbines. I assume there is nothing you can do on a SR22T. Carbureted airplanes have a 2nd inlet air path that is heated by exhaust but injected planes don’t have anything like that.

Can you manually select alternate air? In the piston PA46 you can and do before entering any potential icing.

Cannot be selected manually. It should have opened automatically. Under normal conditions, the alternate air assembly door is held closed by magnetic force. If the air induction system should become blocked, suction created by the engine will open the door and draw unfiltered air from inside the cowl. When the door opens, a switch opens which causes an annunciation on the Primary Flight Display to alert the pilot.

Thanks for posting that, Aeroplus.

That sort of thing is pretty worrying; it should not happen. 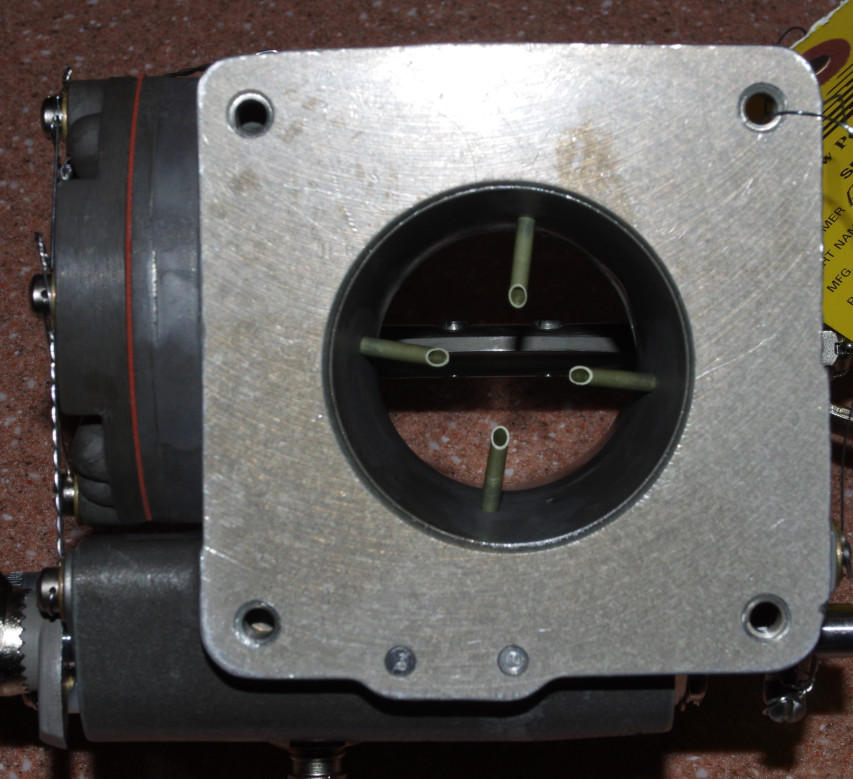 These are used to measure the airflow. If these ice up, the servo will shut off the fuel.

What was the ambient temp, Aeroplus? At FL230 it had to be well outside the 0C to -15C band, so to get ice on the inside of the alternate air door there had to be compression heating taking place. So probably it wasn’t just ice accumulation on the air filter which is right up front. If it was just that, your alternate air door would not have frozen up because that is downstream.

The use of (manually selected) alternate air merely shifts the OAT band in which you will get servo icing, to a lower OAT. How much, remains to be determined, with a test flight on an instrumented aircraft. But I had it at -15C so I suspect the shift is of the order of 10C.

Carbureted airplanes have a 2nd inlet air path that is heated by exhaust but injected planes don’t have anything like that.

The alternate air is heated by having passed through the engine cylinder fins.

So the situation is the same as with a carb, where the warmer air merely shifts the carb icing band along a bit. That is why one should not fly with carb heat on all the time. And the same applies with the alternate air in injected engines. It is IMHO wrong to fly with that open the whole time (no matter what the POH says – prob99 they never tested it) because if you do get icing in there, you have no tools left to restore power with.

What is unknown is whether the air below the engine is hot enough to ensure it is above 0C even with the OAT being say -40C. Again, only a high altitude test will be able to prove that. An it will need to be done with a low power descent too, because that is the worst case (cool cylinders) i.e. the least effective alternate air.

Apparently, thousands of people get smartphone alerts when somebody sets 7700 on FR24…

Immediately. It is held closed by a spring. The engine creates suction through its pistons and if the pressure falls below a certain level, the suction is strong enough to pull the door open.

The Beech F33A hast got the same alternate air held close by a spring but they added a manual lever which forces the door open for a short moment. So if it is not iced up badly this lever creates more force than the suction and can break the ice.

In the piston PA46 the alternate air door is all manual The experience is the filter will usually not ice up if the wings get ice. It seems to be the much “thinner” clouds which generate filter icing while the airframe usually stays clean.

OAT was around minus 25/30 degrees C at FL230. The aircraft is limited to minus 40.
Peter: I don’t know all the technical details. Sorry. I have posted a message on the COPA forum (cirruspilots.org) of which I am also a member. Lets see what kind of response I get from there.
Sebastian: I missed you at the MMIG46 event in Sicily :-(

The experience is the filter will usually not ice up if the wings get ice. It seems to be the much “thinner” clouds which generate filter icing while the airframe usually stays clean.

I can 100% confirm the bit about the filter not icing up routinely, when the wings do ice up routinely. I have never seen that, despite having been in icing conditions many times. Let’s face it, our planes would be unflyable for IFR if the air filter iced up when the wings ice up. Not everybody has prop TKS.

The bit about thinner clouds is interesting, but I would say, based on my experience, that rather than happening in thinner clouds it may be happening at a lower temperature e.g. -15C. But I have poor evidence for that, because on the times I got it I was too busy to check the MP! (I planned to install a little webcam of the instrument panel for this purpose, bought one – Roadhawk HD – which records the most recent 7hrs, but haven’t put it in yet). OTOH the situation was always recovered within a minute or so by the use of the alternate air (plus the electric pump, though I doubt that did anything) and that would never fix an iced up air filter.

IMHO no way to get air filter icing in that, but who knows?

Unfortunately the COPA forum is behind a “paywall”. But it would be interesting to hear what others say there. Do they have a prohibition on reposting info elsewhere? PPL/IR has, and the Socata site retains a copyright on everything posted. I would find that hard to swallow, for safety related issues.

Airborne_Again
ESKC (Uppsala/Sundbro), Sweden
85 Posts
This thread is locked. This means you can't add a response.
Sign in to add your message