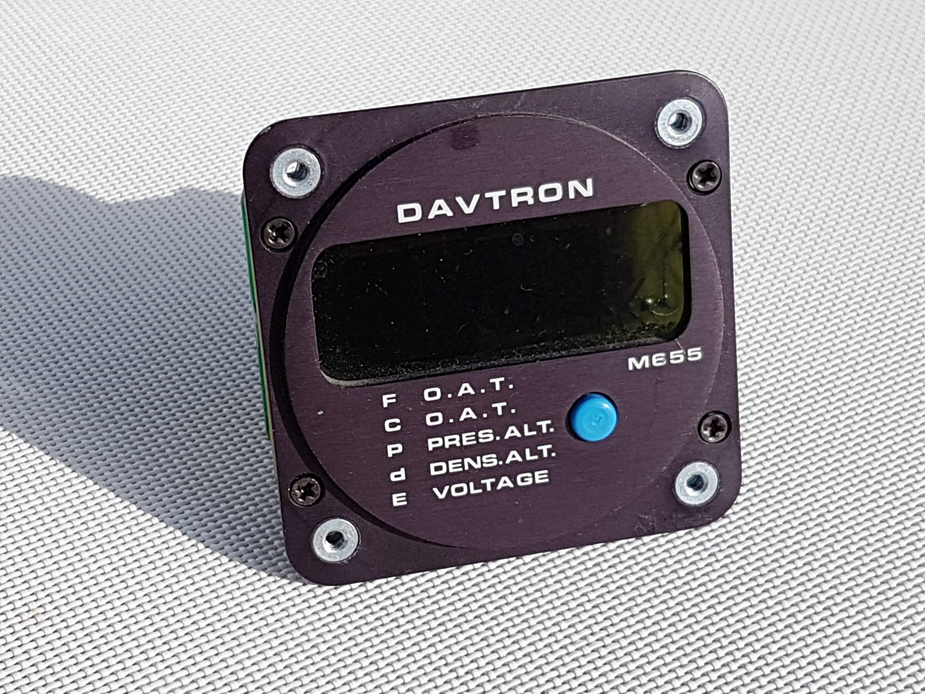 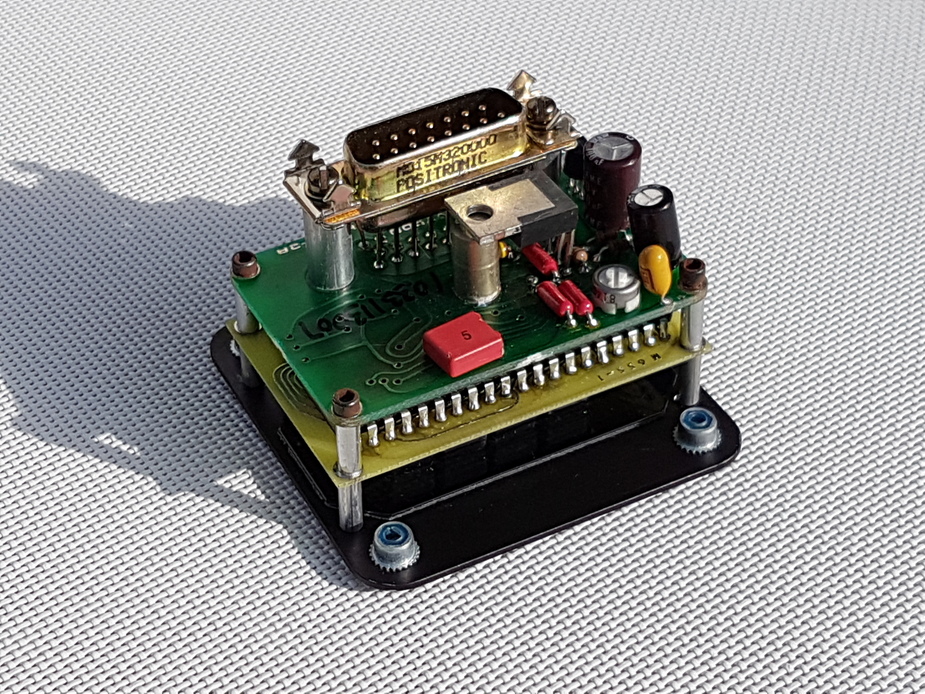 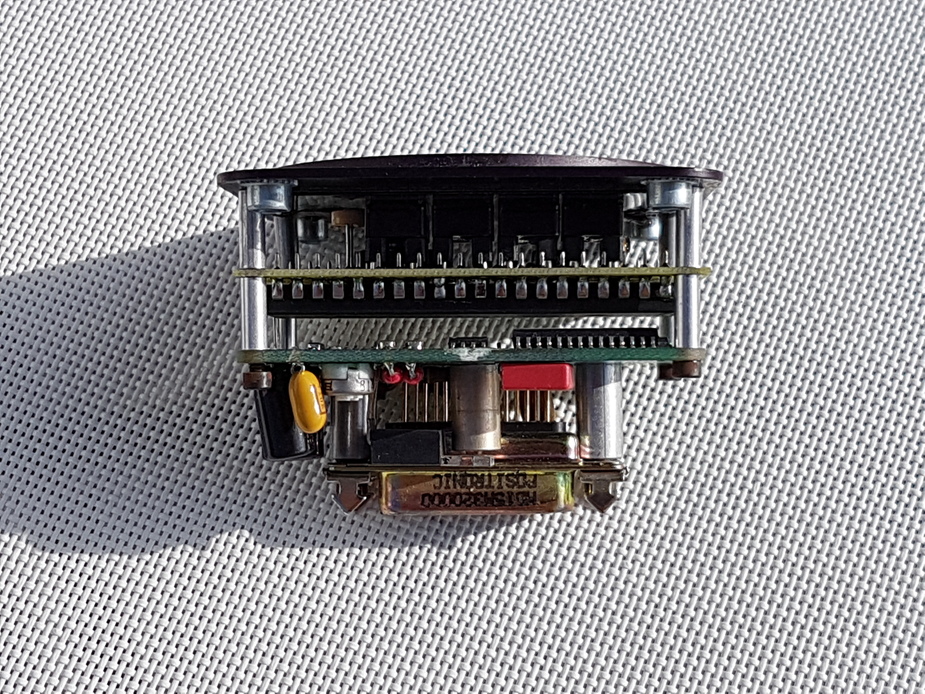 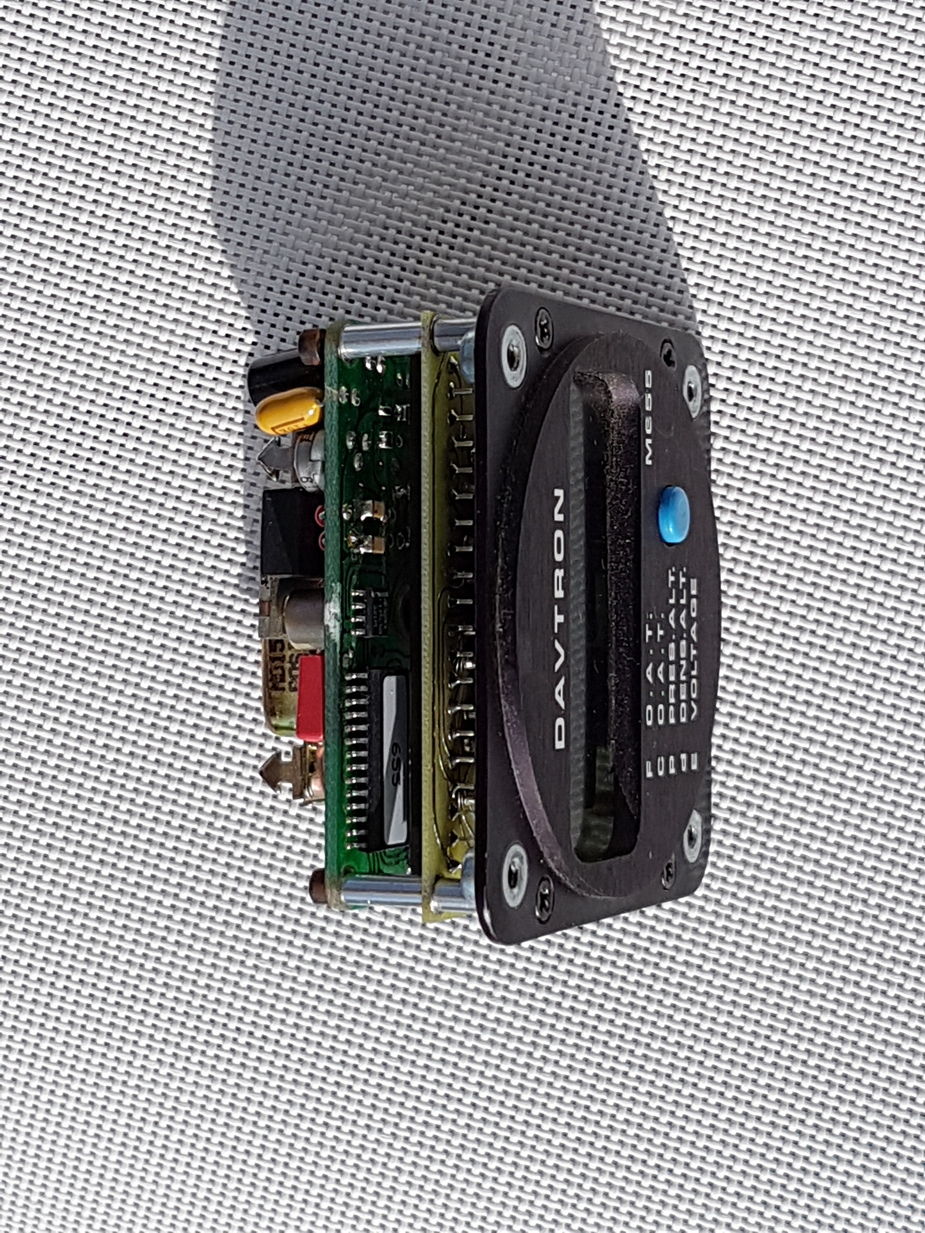 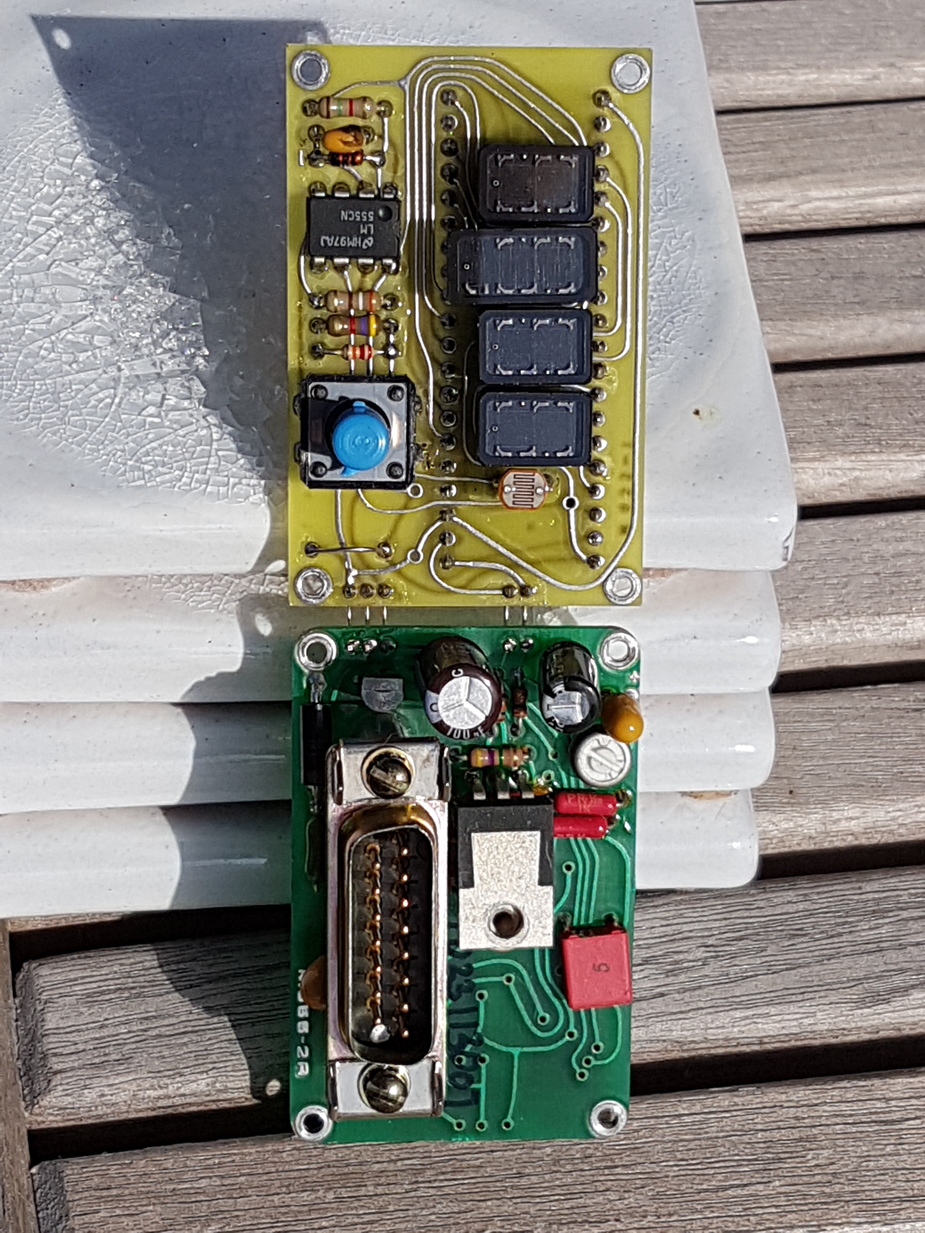 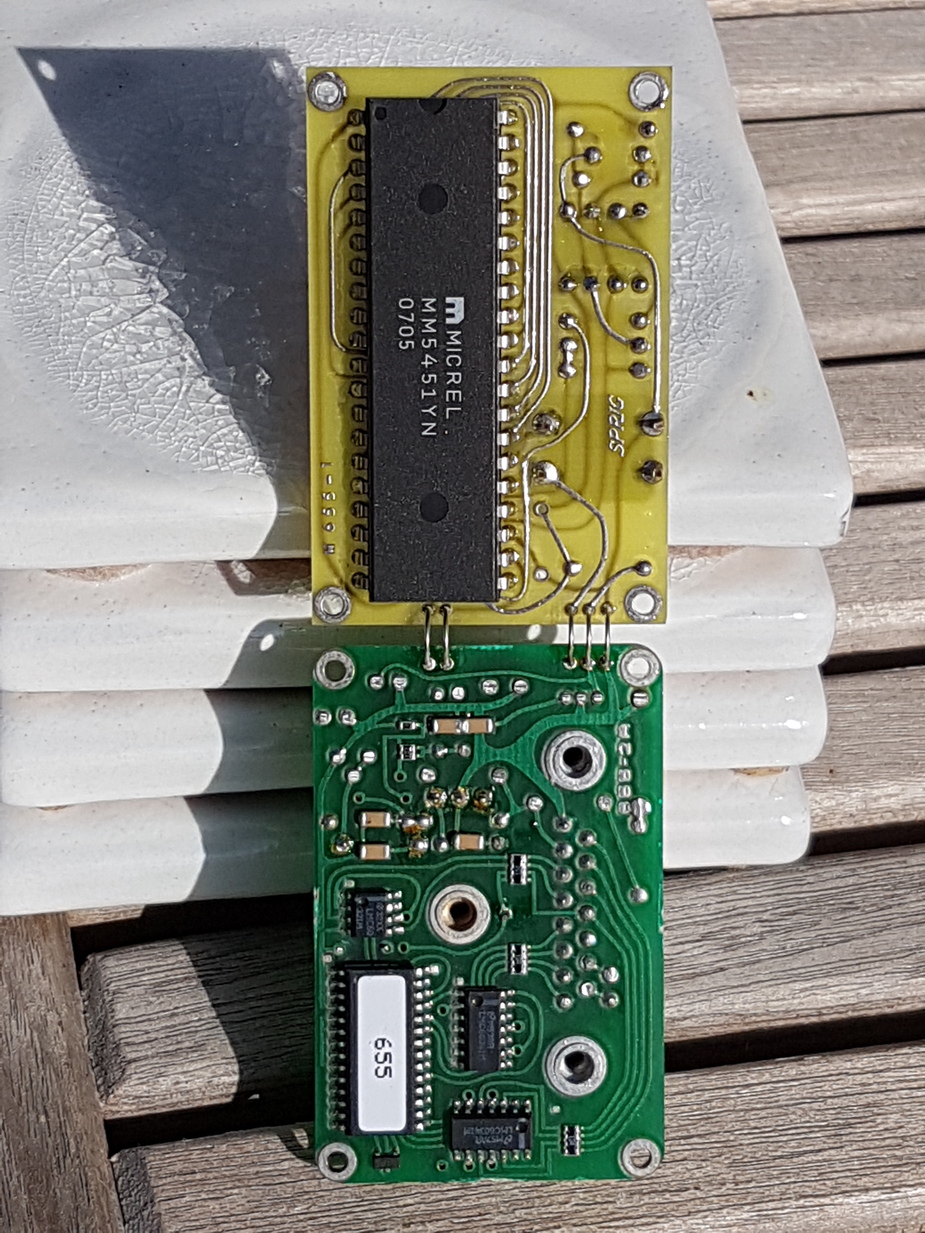 The big chip is a dumb LED driver, so all the display decoding is done in software.

The displays I have never seen before. They look a bit like the fluorescent ones in the King radios. They are marked KW-1050 58774 and nothing comes up on google. However a very close look shows these to be incandescent filament lamps! Like the early 1970s calculators. 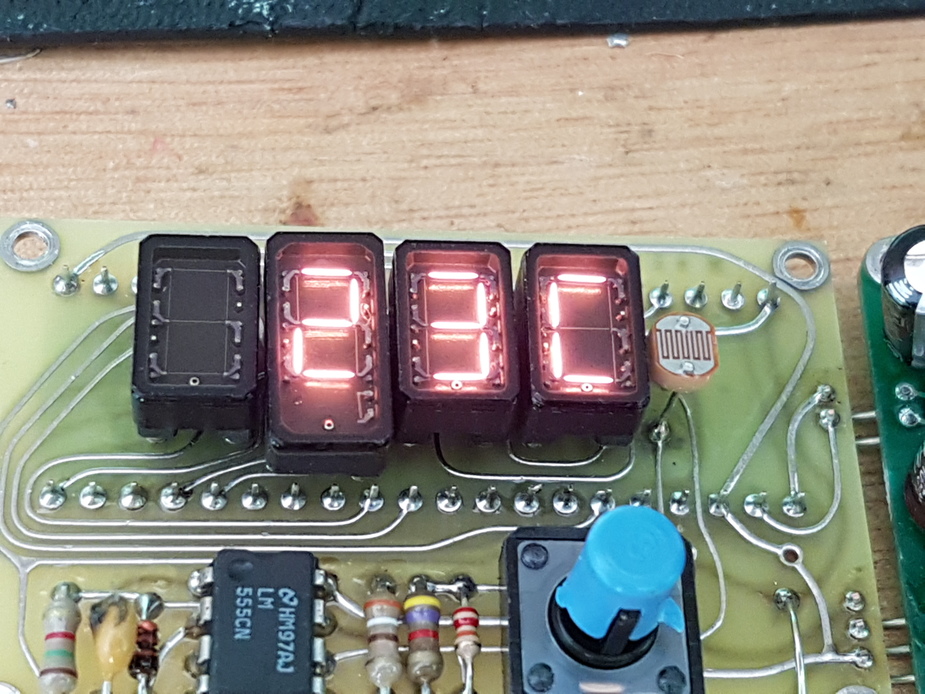 There is no external A-D converter but the PIC contains a slow 16-bit one.

The linear regulator is a 7808 and at 28V that will be dissipating the entire display current x 20V which is (80-110mA according to display brightness) up to 3W! It is bolted to the back of the aluminium case.

The PCBs are from the 1970s, pre-CAD and done with the black adhesive tape, then photographed… The whole thing is a trip back in time, about 40 years, but the PIC is obviously more recent.

Parts cost? $30 or so, including a few $ for the fabricated case. But I can only guess the cost of those displays. It goes for $280

What a weird blend of old and (relatively) new.

That unit now has LED displays but they still sell the old filament based one for use with night vision goggles.

What I found truly amazing is that they are still doing their PCB design using the black tape. The CPU board is done that way too! 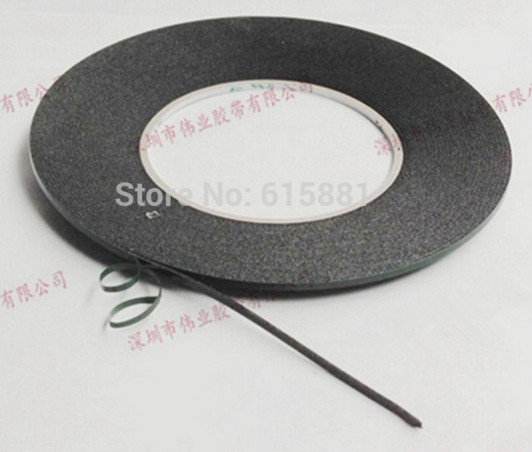 The whole world went to CAD (Orcad, Protel, etc) about 25 years ago.

From this thread here is the Shadin ADC-200 airdata computer 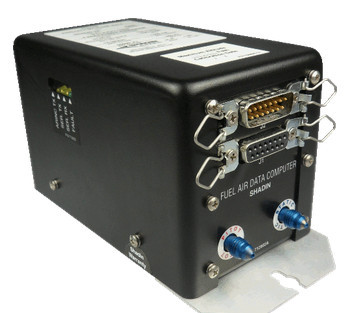 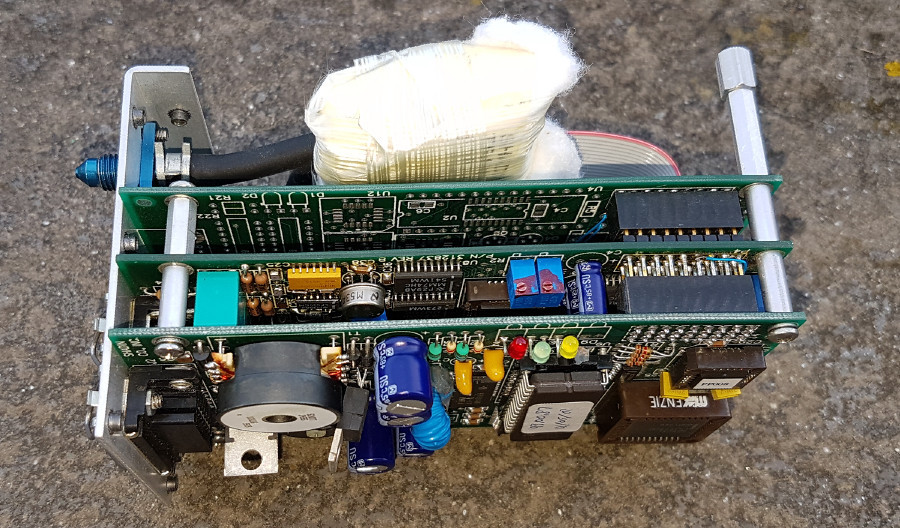 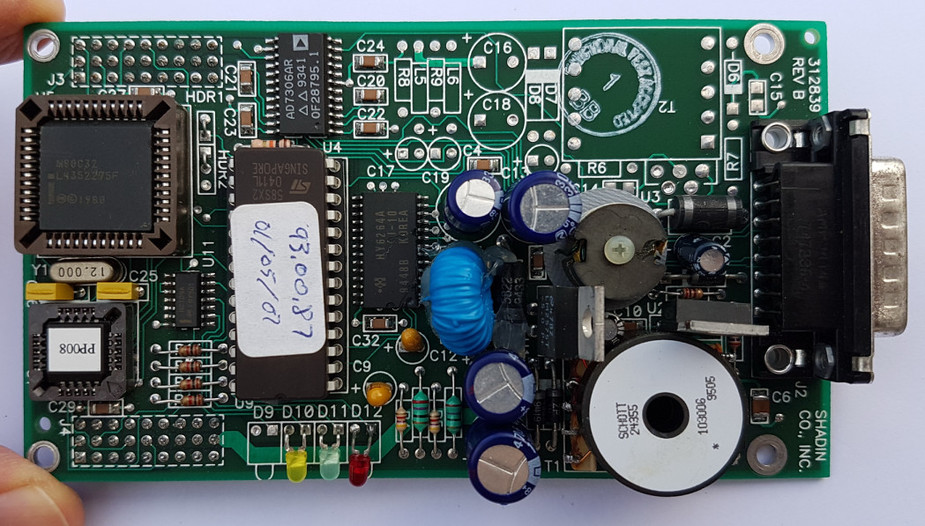 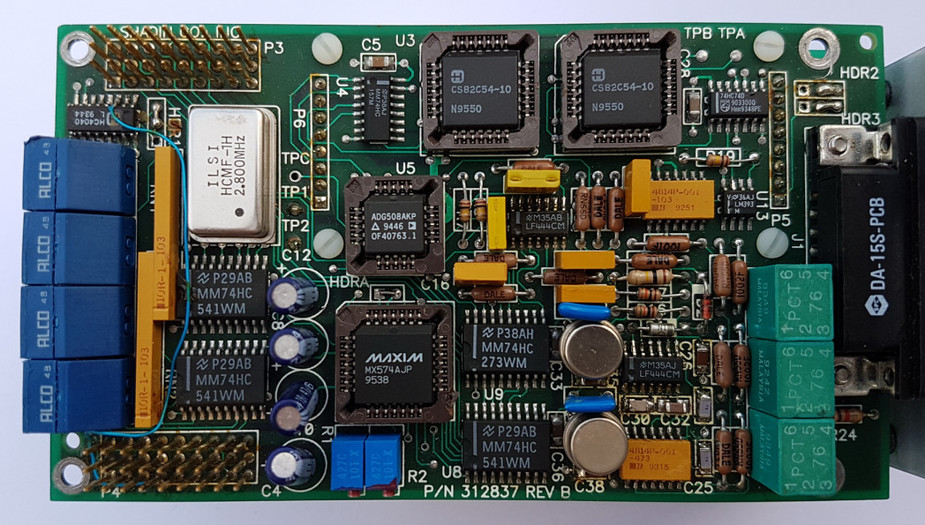 Various date codes on components suggest it was made in 1995. 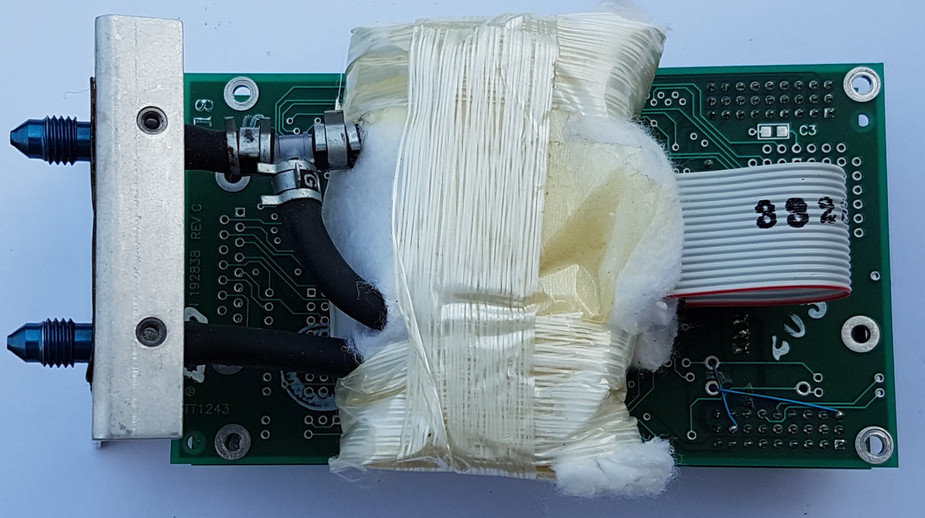 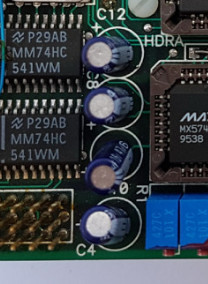 which not only break off under vibration but, being electrolytic capacitors, will age and lose their capacitance.

And now imagine the same kind of technology used in an [ostensibly crash-survivable] FDR of a military aircraft. Here are the post-crash innards of one from a Russian Su-24 shot down by Turkey for briefly entering the Turkish airspace from Syria: 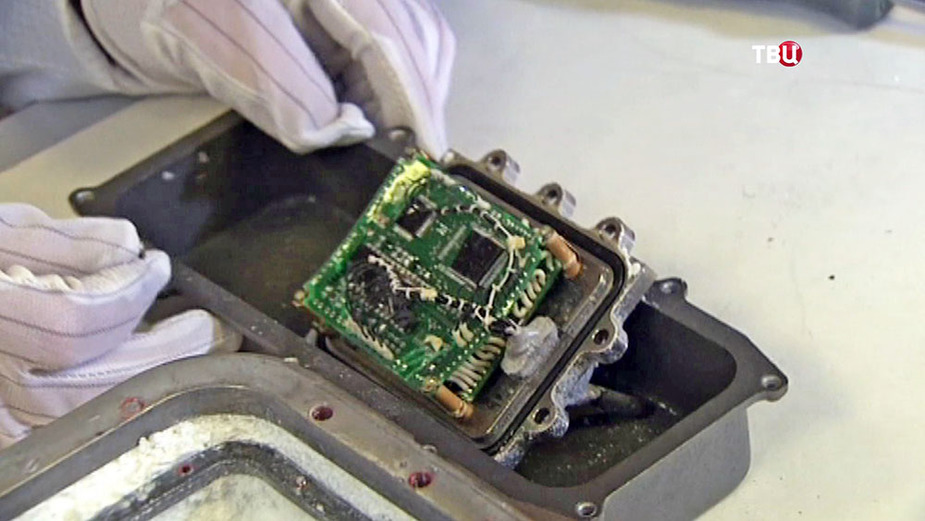 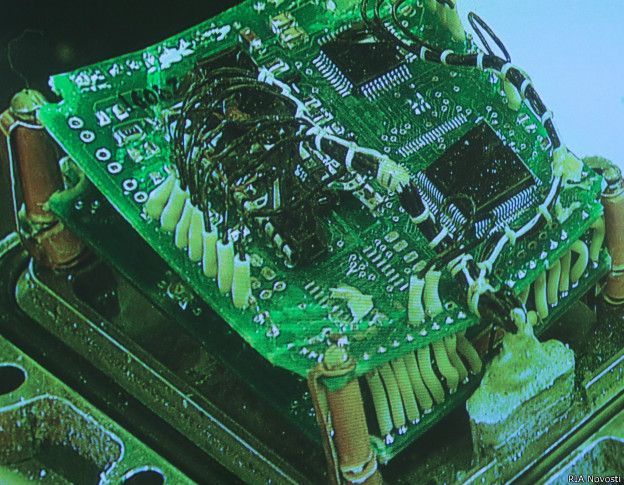 Well at least it is largely surface mount, though the mounting pillars are flimsy as hell. Whoever did that had no clue at all.

In 1991 I did a project for a towed array sonar (for oil exploration, not military submarine stuff) where compressed air was used to create shock waves, which propagated through the sea bed and were picked up by the towed array, for later analysis when the ship returned (the ship operator was not supposed to see the analysis

). The assembly had to withstand something like 1000G. The CPU was an H8/500. It was on 2.5mm fibreglass, well supported, and all SMT. No component was more than about 3mm tall. Back then there were no issues with getting the components and today it is trivial. Nobody needs to use electrolytic capacitors, and everybody has known for many decades that they have a limited life – unless you get specialised milspec ones. Large cap values can be eliminated by design.

I thought military aircraft don’t have FDRs – for obvious reasons.

I like this thread. If you have ever used an old King 170B or 175 Nav Comm with a sloppy frequency selector dial then you will find the problem is the detent spring.

This spring holds the brass cogs in the correct place as you dial in the frequency. Often this spring is worn or snapped on one side. Here is a King 170 B before and after a respray and some overlay panels. Always liked the king 170\5 units. No manual required for the students on how to use it.

That refurbished unit looks lovely but is it really worth it? The units won’t go on for ever and with 8.33 coming the are going to be box two at best.

Having said that I think i would like one.

Carrying on with my theme of old school avionics………….here is a KMA20 Audio panel which was looking a bit tatty before and after a re-spray and some overlay decals.

The guts is just switches, transistors and an old school audio transformer presumably for the speaker output. I agree with Bathman but the old King radios do still have a market value in the United States where they don’t have all of this 8.33 nonsense going on!

Thanks to all for a great forum – Archer-181

Archer-181
United Kingdom
158 Posts
This thread is locked. This means you can't add a response.
Sign in to add your message