Lelystad - Nordkap and in between

Just sharing… We are back from a 3400NM VFR flight to the Nordkap in Norway. The journey took us 6 days and about 660 liters of jet fuel to complete. We flew a DA-40 TDI PH-PCA from Lelystad. We would’ve not been able to get there and back without a very helpful Norwegian meteo service and a buckload of luck with the weather.

Our preparations included reading AIPs, route planning, ordering all necessary charts and all unnecessary gadgets. On departure the aircraft was properly loaded with all kinds of camping and communication gear that remained unused for the whole journey. The only things that turned really useful were the portable transceiver for listening to the ATIS and startup clearances and a cigarette lighter used to fire the BBQ.

To avoid landing fee hassles we ordered a Weekly Card from Avinor (http://www.avinor.no/en/avinor/traffic/_landingcharges – about 110,- euros) that covers all landings at all Avinor airports except Oslo. Nobody ever asked us to show it but it came with the same sort of safe feeling that you get when you buy an insurance.

We planned the route almost entirely with SkyDemon. It occured to us that all controllers really liked us using IFR waypoints as entry and exit points for the controlled airspace. They are also very convenient when used with G1000 that we had on board. We also followed the advice from the Norwegian AIP to avoid route planning over the airfields to avoid confusion whether the airfield is just a waypoint or is actually used for landing. We didn’t have a single refusal on our ATC requests.

We tanked and loaded the aircraft the evening before departure. At about 8am we departed Lelystad/EHLE for Kristiansand/ENCN on a more or less direct route over the German North Sea islands and Denmark. We were able to climb to FL095 after leaving the Dutch airspace and we remained at this altitude all the way to Kristiansand. The flight is a bit boring and we let the autopilot do its job for 3.5 hours straight. The customs at ENCN were not really interested in our camping gear and we were cleared in less than a minute despite the active terrorism alert. After a pølser with a coke we departed along the coast to Bergen/ENBR. Southern Norway is beautiful and we enjoyed every minute of this 2 hour flight! Bergen allowed us to fly a VFR ILS approach and arranged free handling for us bringing us by car from the airplane to the Flybussen stop. In the evening we enjoyed watching the tall ships at the harbour. 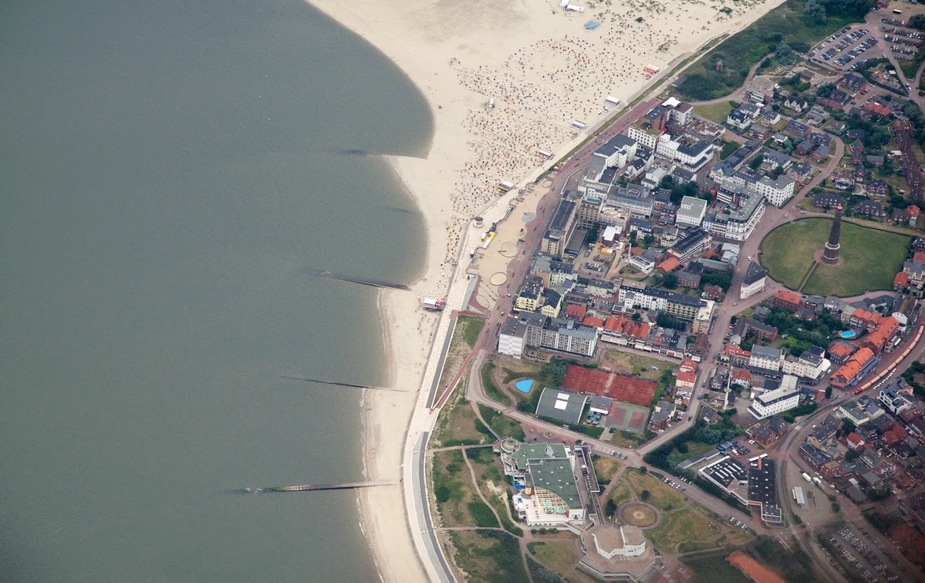 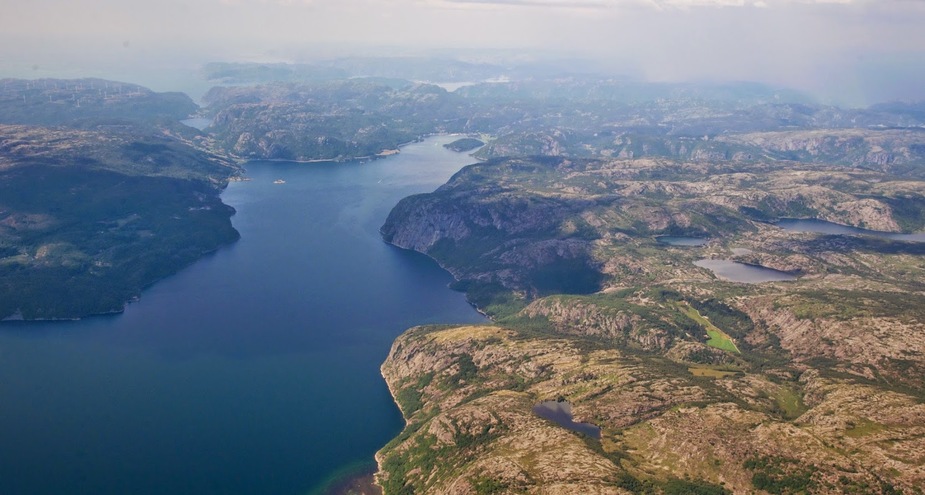 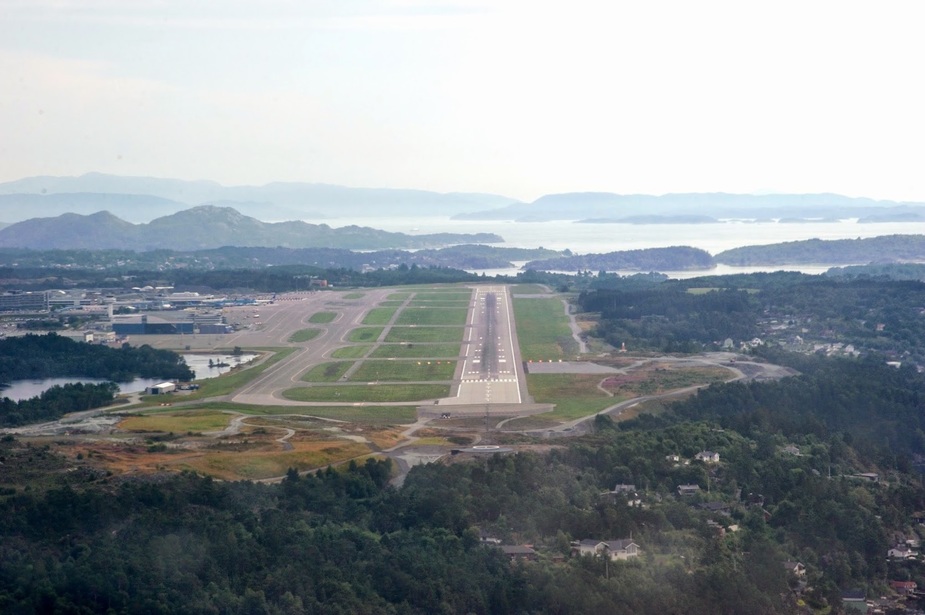 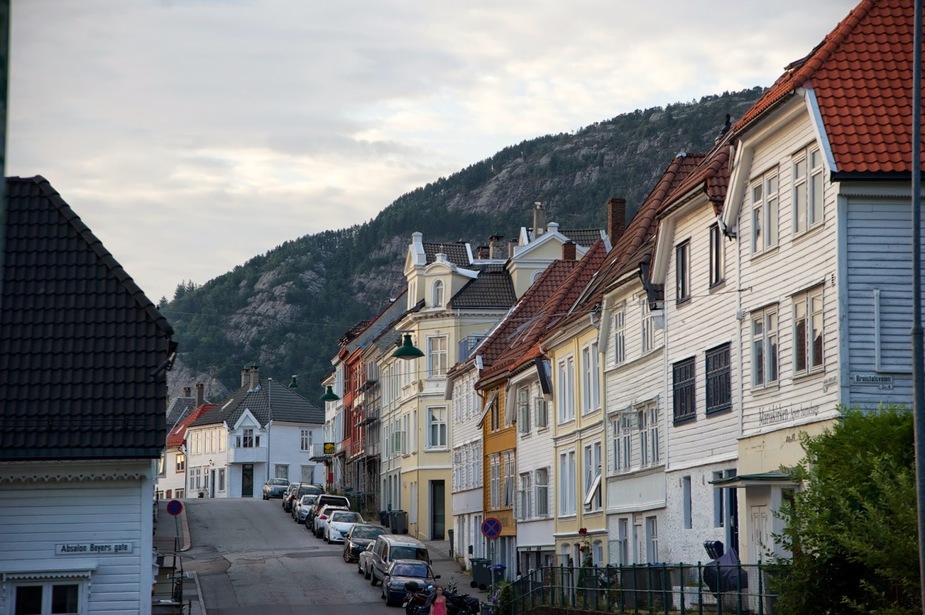 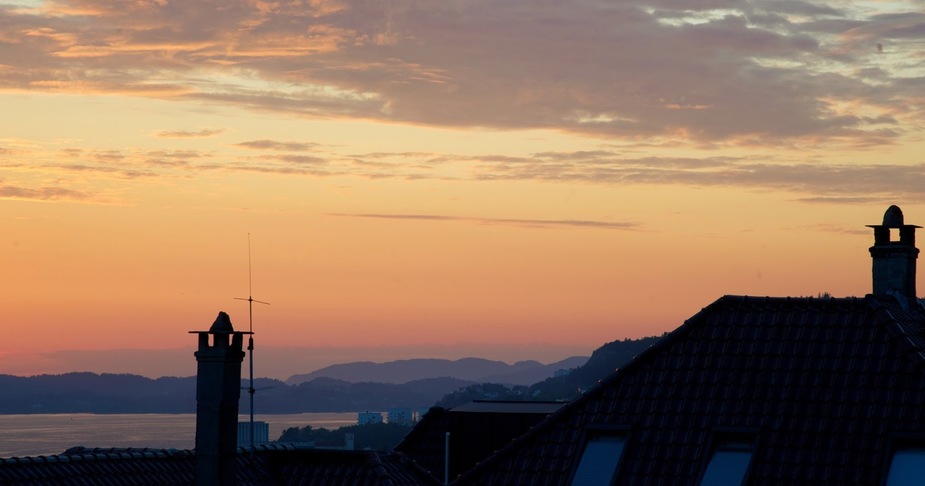 In a crispy VMC weather we flew low-level along the fjords to Songdal/ENSG. The approach to ENSG is one of the most scenic I ever saw. You fly 3000ft following the fjord until you are in a position and cleared for a straight-in approach. Songdal is by far the friendliest GA airport in Norway and the tower crew is simply amazing. Thank you so much! I regret not doing a couple of touch and goes there just for the scenery.
After Songdal we flew back along the fjord and the coastline to Alesund. Alesund is bland and boring. Nothing to do there. That means another pølser and a quick departure to Trondheim/ENVA. The Trondheim airport is pretty far away from the city but Flybussen are everywhere and they are really fast and comfortable. Avoid Comfort Inn as it is extremely noisy at night. 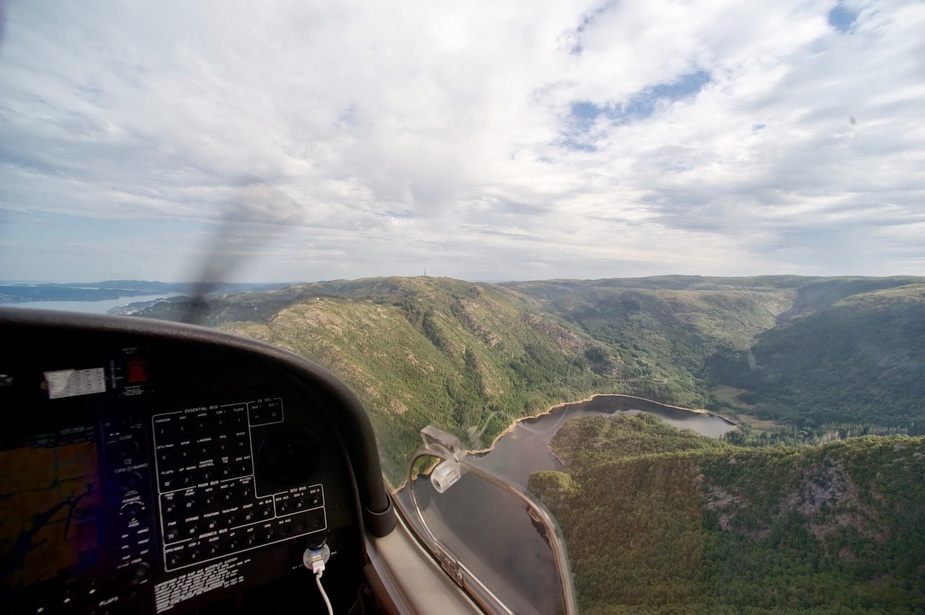 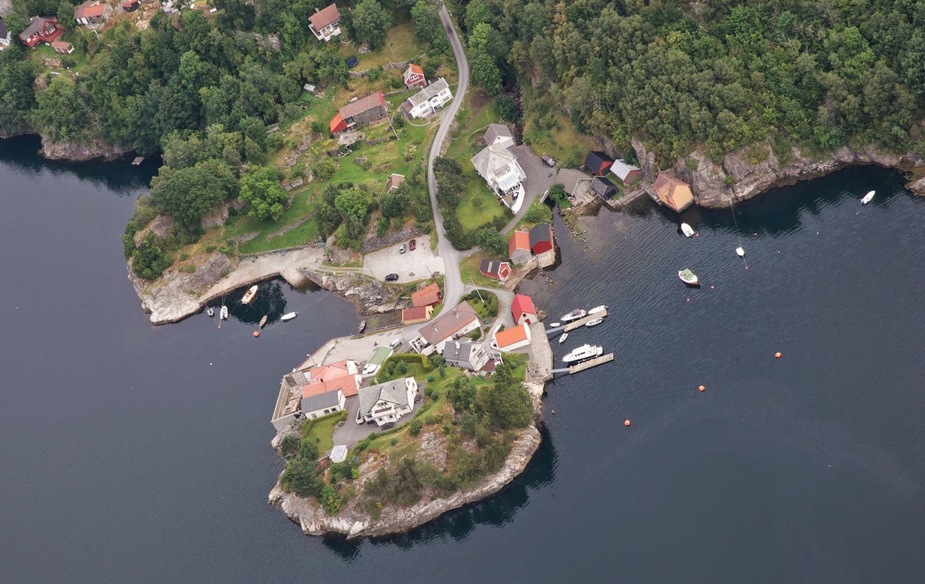 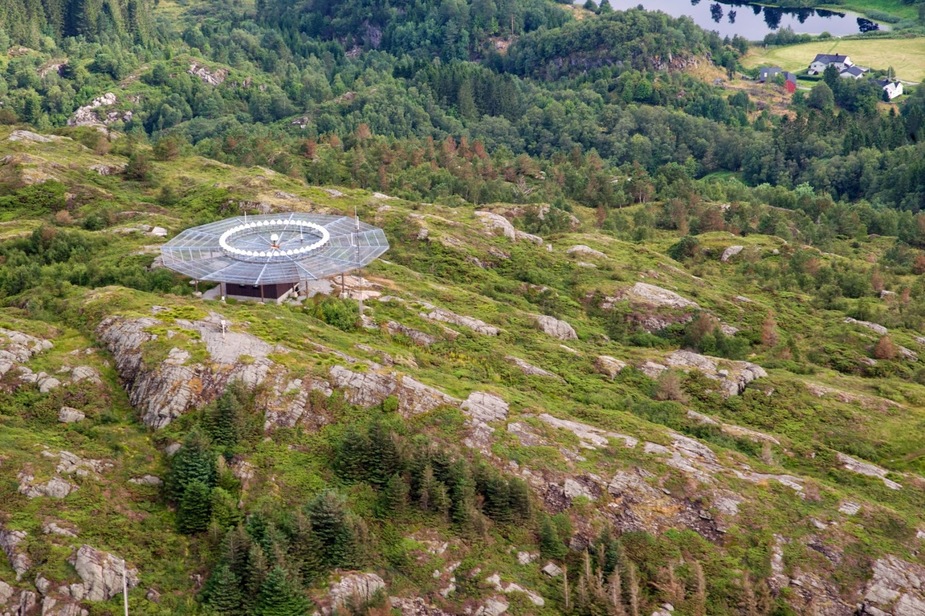 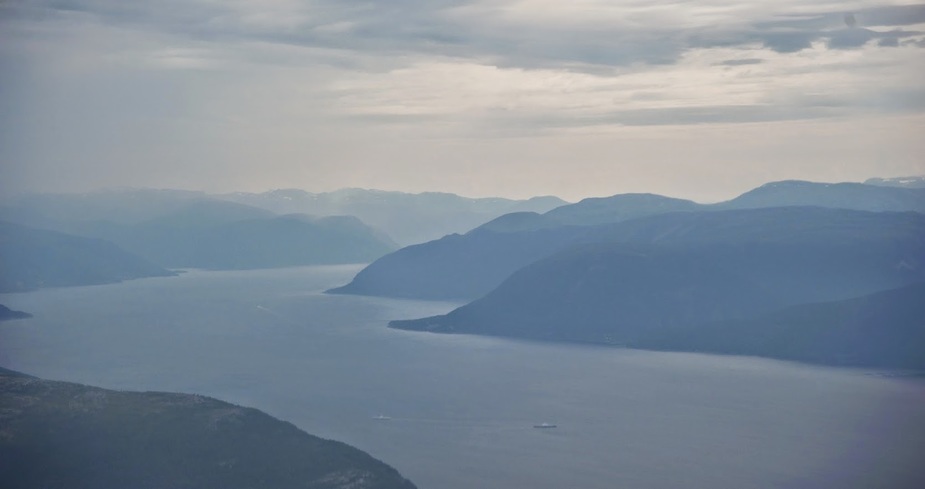 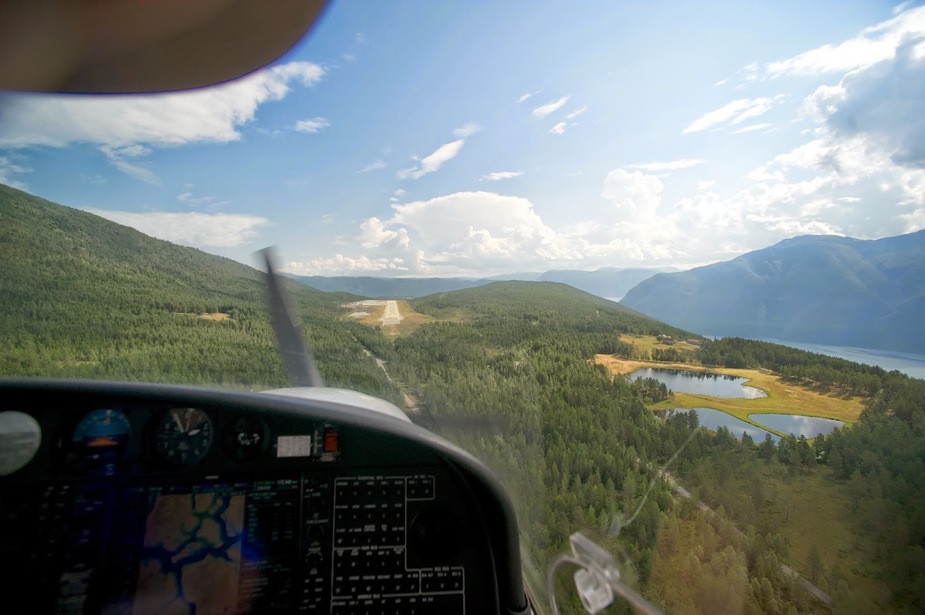 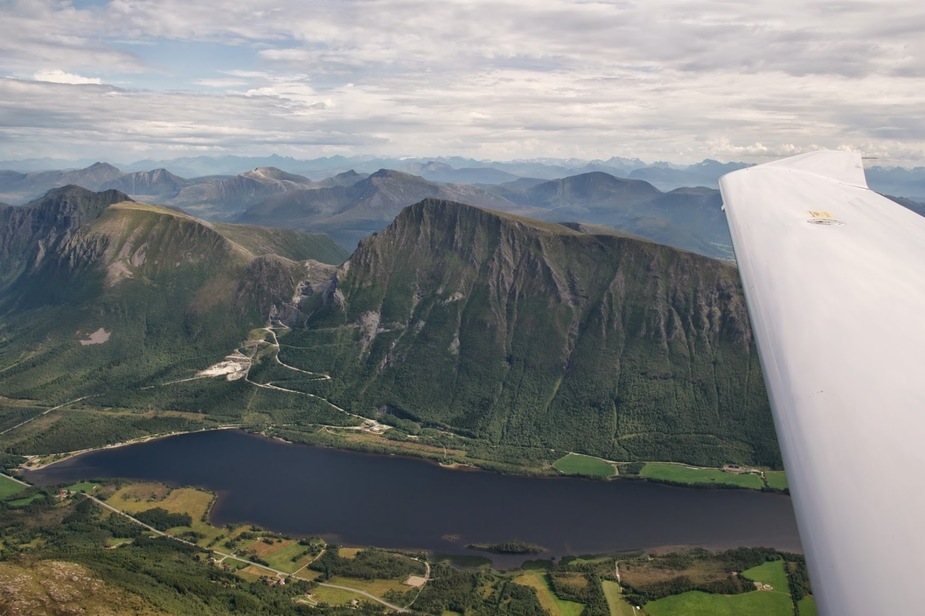 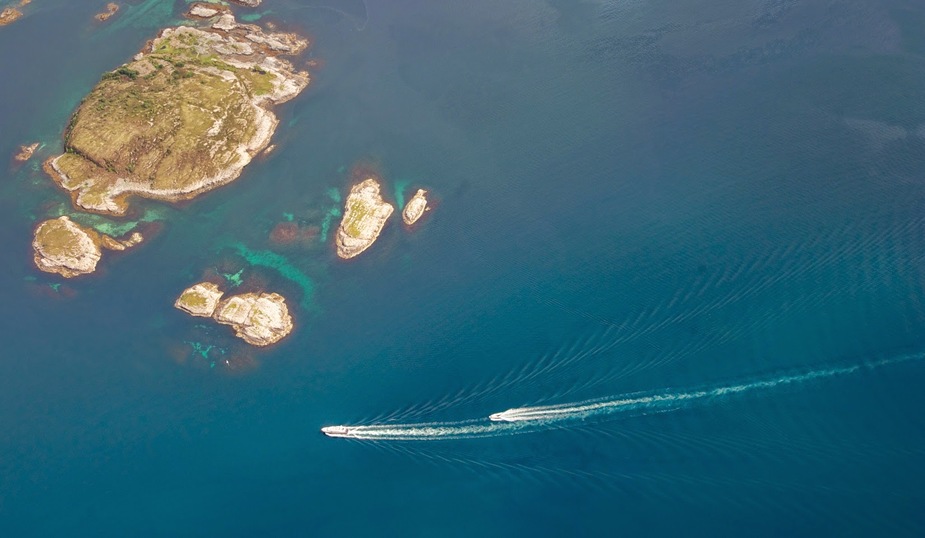 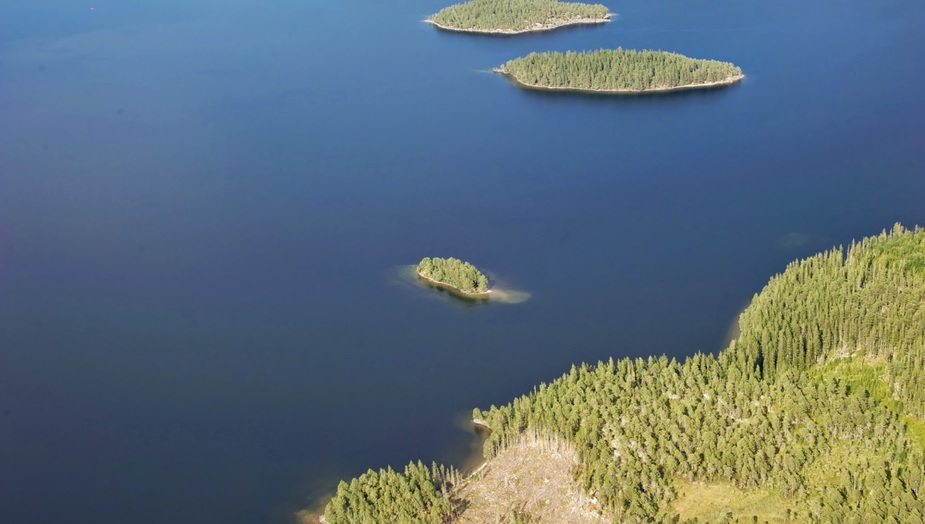 Going North. In the morning we flew a 3.5 hour leg to Tromsø/ENTC with a 15 knots tailwind. Yeah, lucky us! Tromsø is a large but very GA friendly field and people are awesome. Our handling was done by a fire truck. We were even taken in it to some sort of training ground to watch it empty its 4 ton water tank as easy as it was a water gun. After lunch we departed Tromsø for the Nordkap. It is a two hours flight over a breathtaking but potentially deadly scenery. I guess any sort of emergency landing would end in a real emergency there. We flew over the Honningsvåg/ENHV airfield but it was closed. The weather was quickly turning bad so after a couple of circles above ENHV and the Nordkap itself we turned back and landed at Hammerfest/ENHF for coffee and refueling. After a short stop we continue back to Tromsø where we enjoyed some great fish-soup in the sun. On the way from the city back to the airfield we saw sea fog coming in like Godzilla over the rocks. It took us about 5 minutes to get airborne with a lot of help from the ATC. At the moment we departed the thick layer of sea fog already took about 300 m of the runway. We felt lucky to be back in the air for another 3.5 flight back to Trondheim. That day was good for 10.7 flying hours. 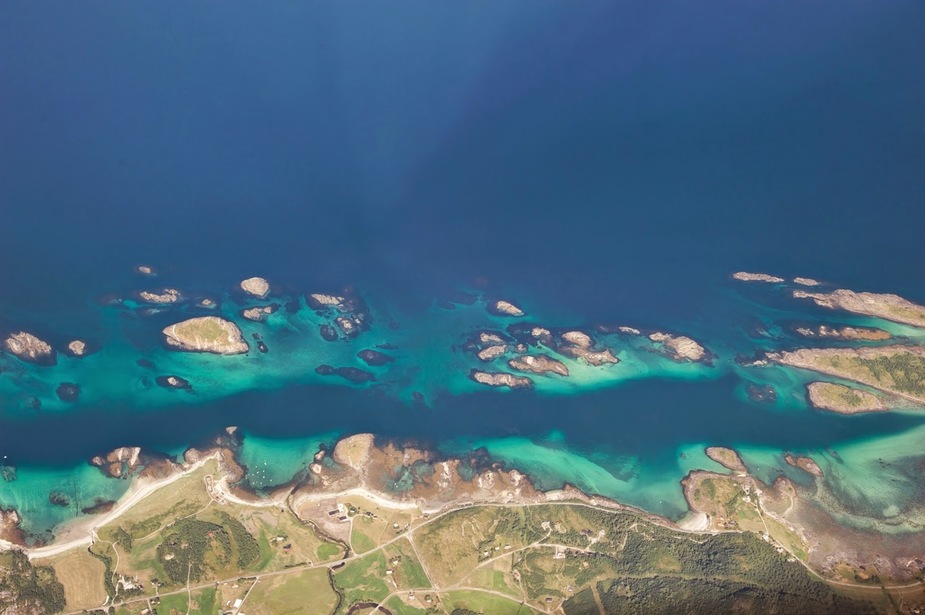 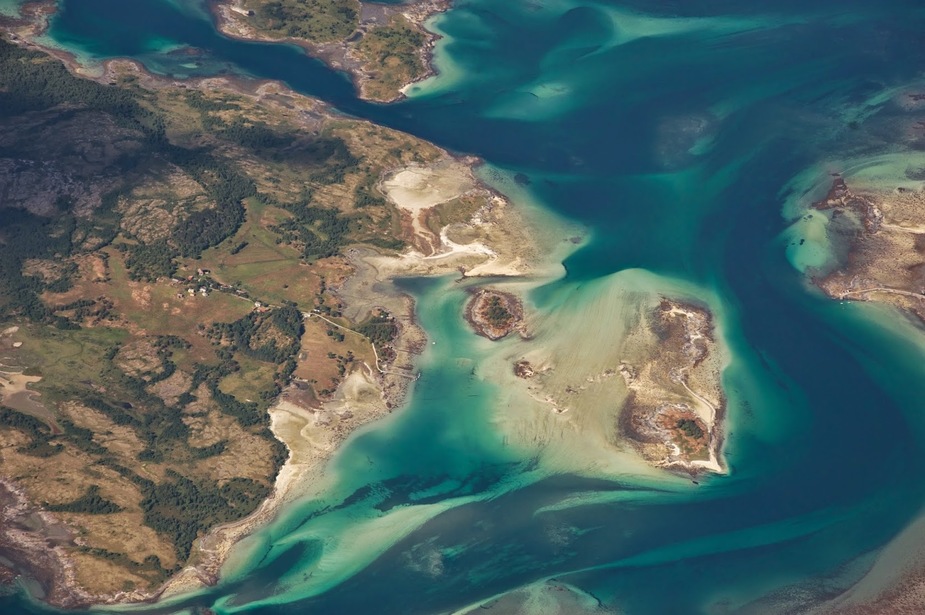 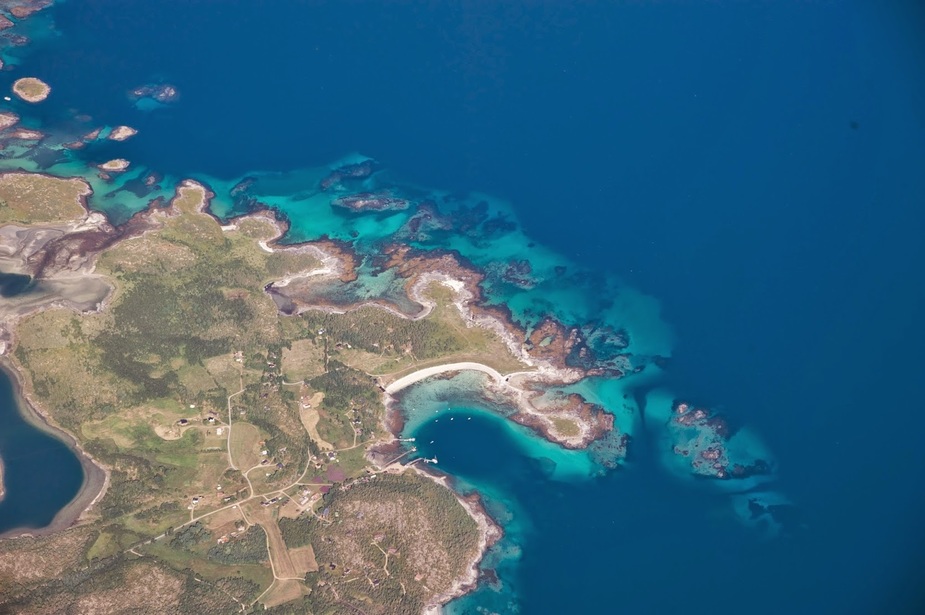 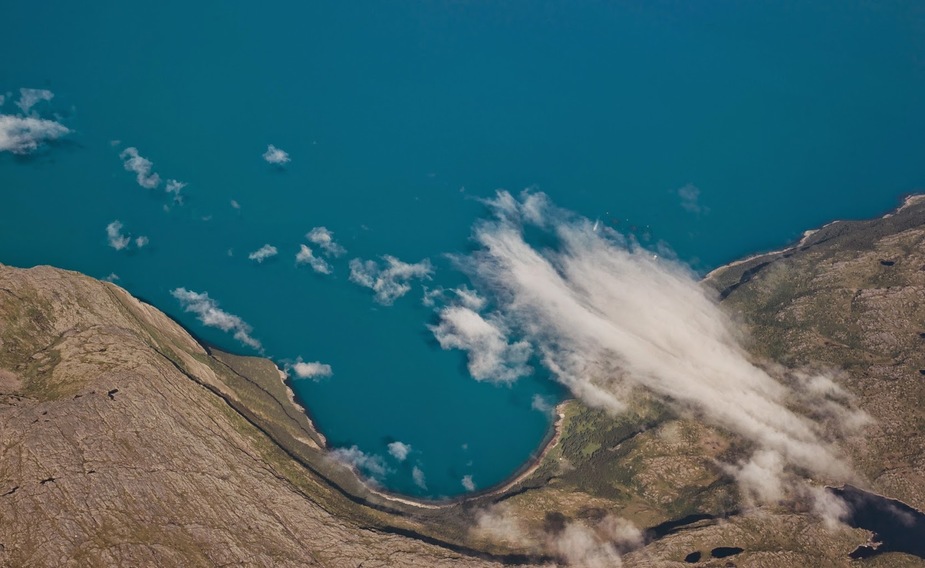 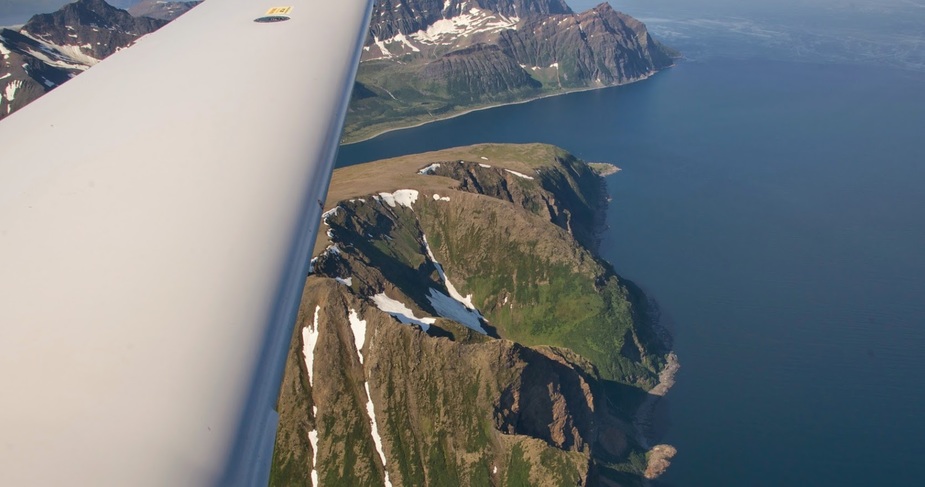 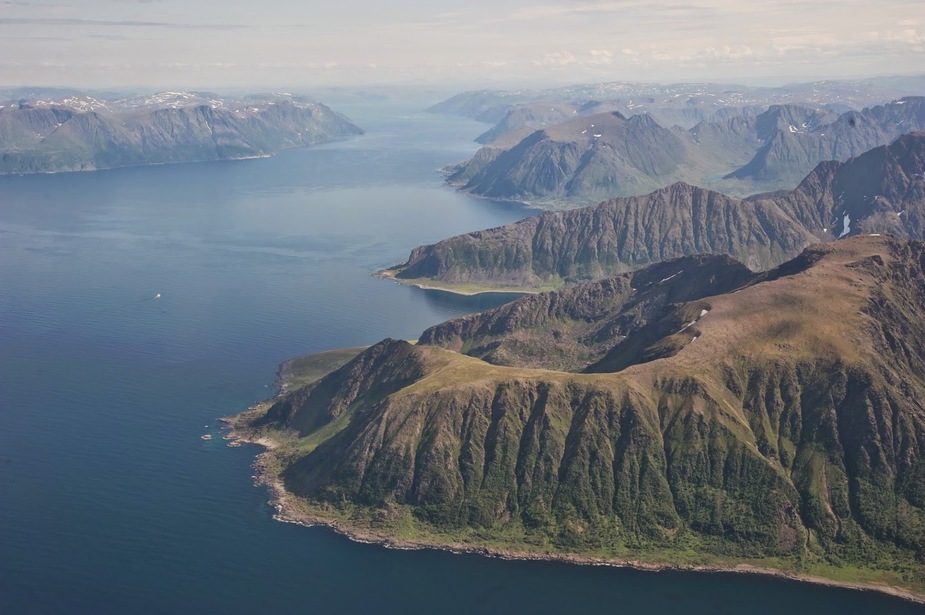 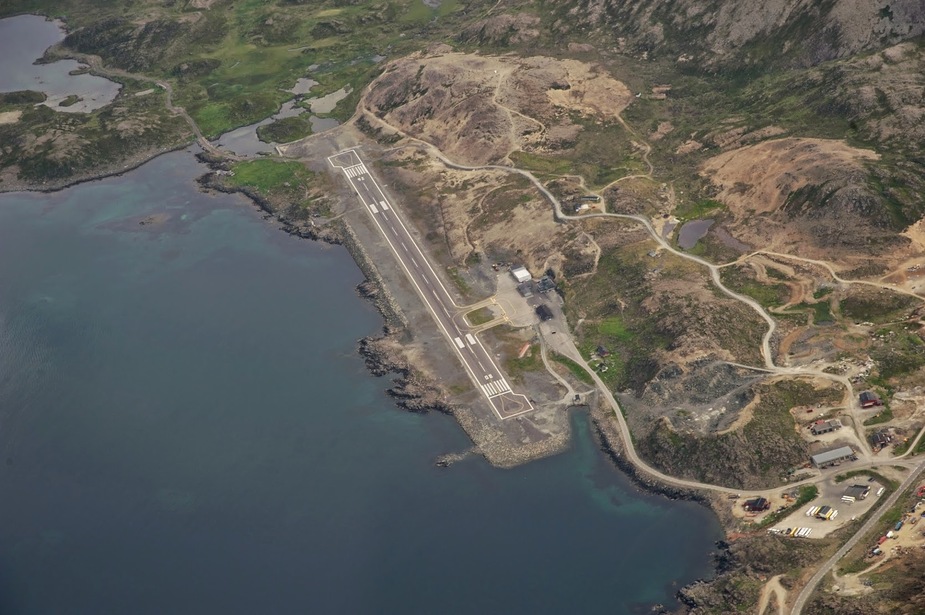 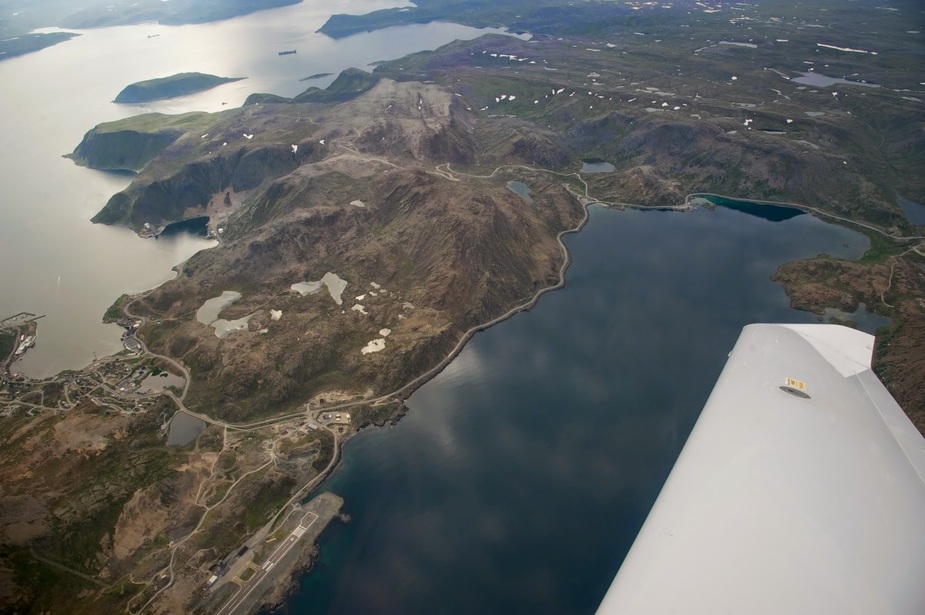 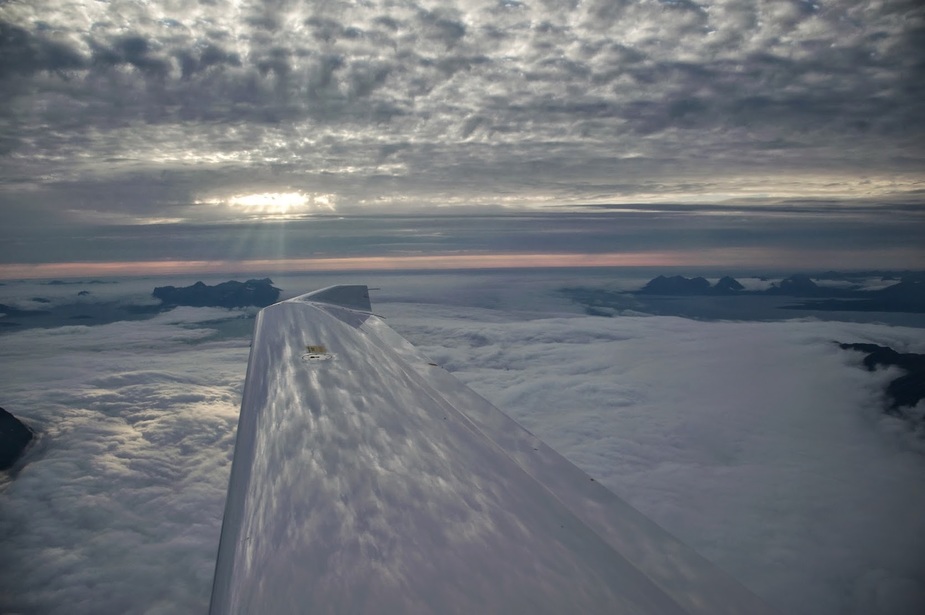 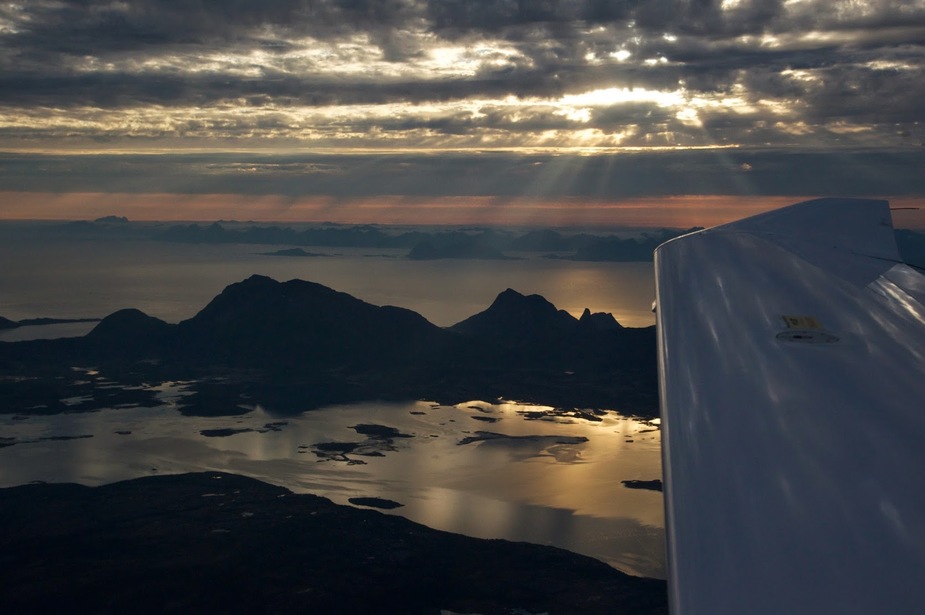 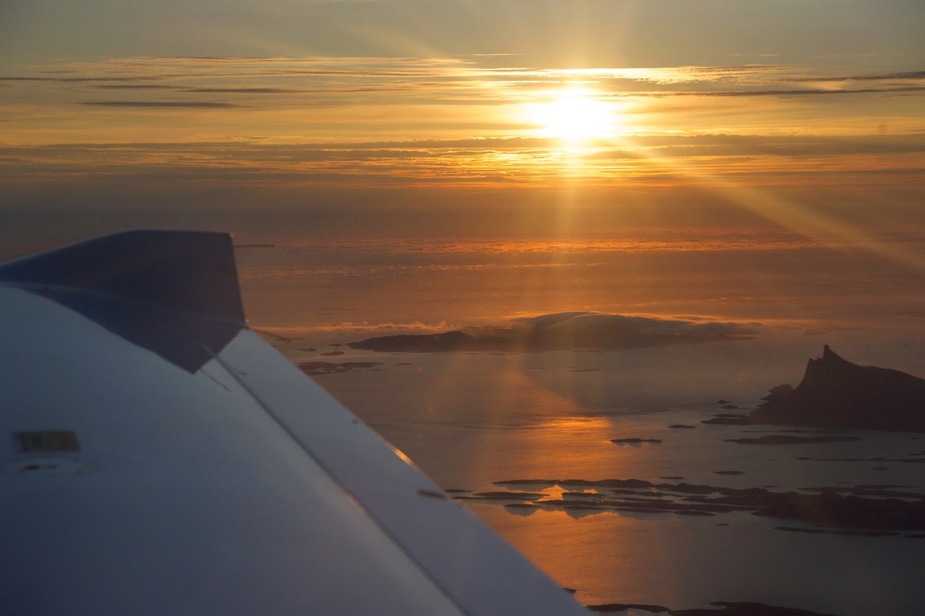 The weather was turning bad in the North and we decided to start our return journey. We flew a more or less direct route over the mountains and hills of Southern Norway to Sandefjord/Torp/ENTO just south of Oslo. Torp is the only field in Norway that I would prefer to avoid. We had all sorts of problems starting with a request to go around from the short final to make way for a 737 to the general lack of handling, weird refueling procedures etc. It didn’t take us long to decide to go further to Kristiansand/ENCN where we spent the evening eating grilled salmon from the bbq and watching the sunset. 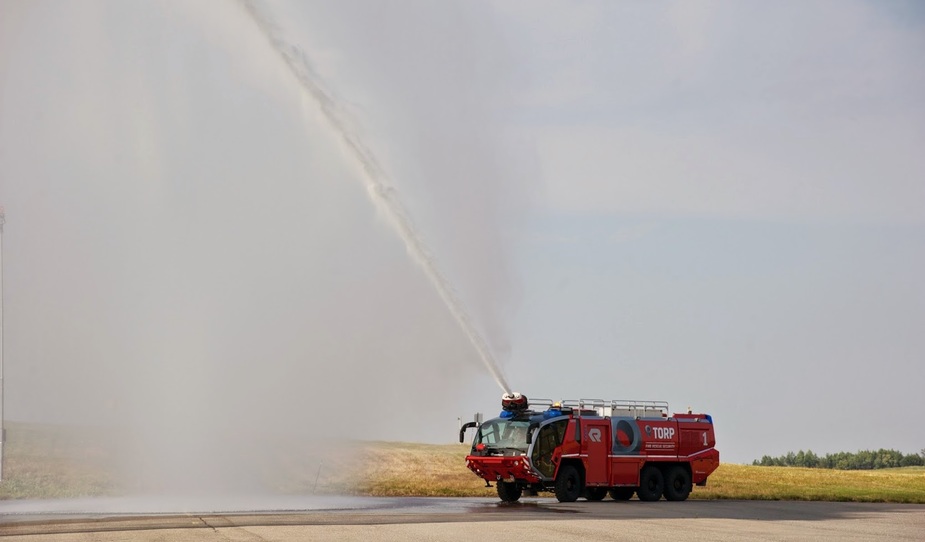 After a day at the fjord beach and a really good lunch at the harbour of Kristiansand we decided to fly to Billund in Denmark to do some NVFR around Aarhus.
At the airport we realised that our oil level was at the minimums and spent about an hour trying to find a refill. No luck. The friendly airfield guys even drove us around to ask for some oil at the Air Force base and some flying schools. We finally called the Diamond factory in Austria and they advised us on the automotive substitutes.
Billund/EKBI is very friendly and relatively cheap. After the dinner we flew an hour NVFR and were allowed to do a VFR ILS approach with a high-speed fly-by at Karup. 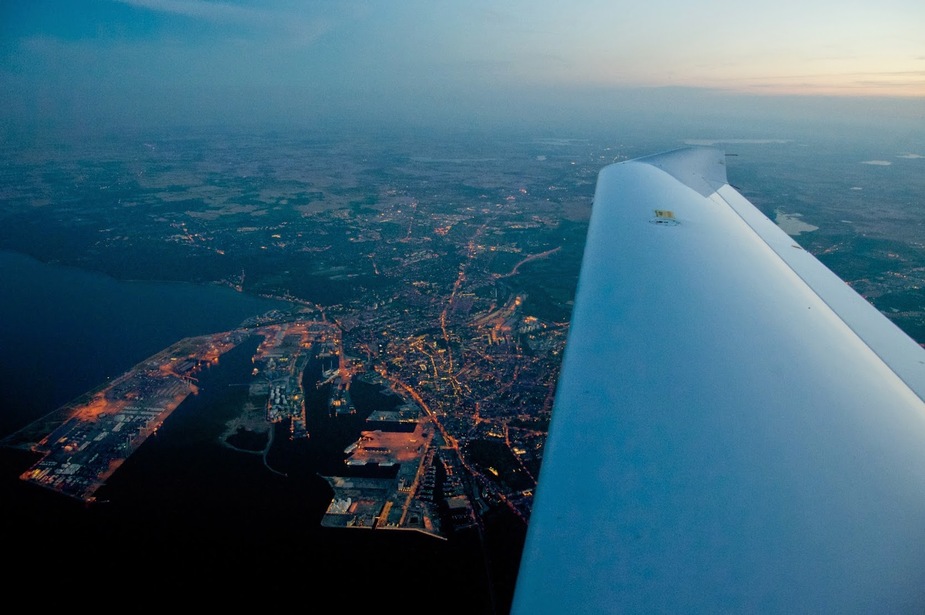 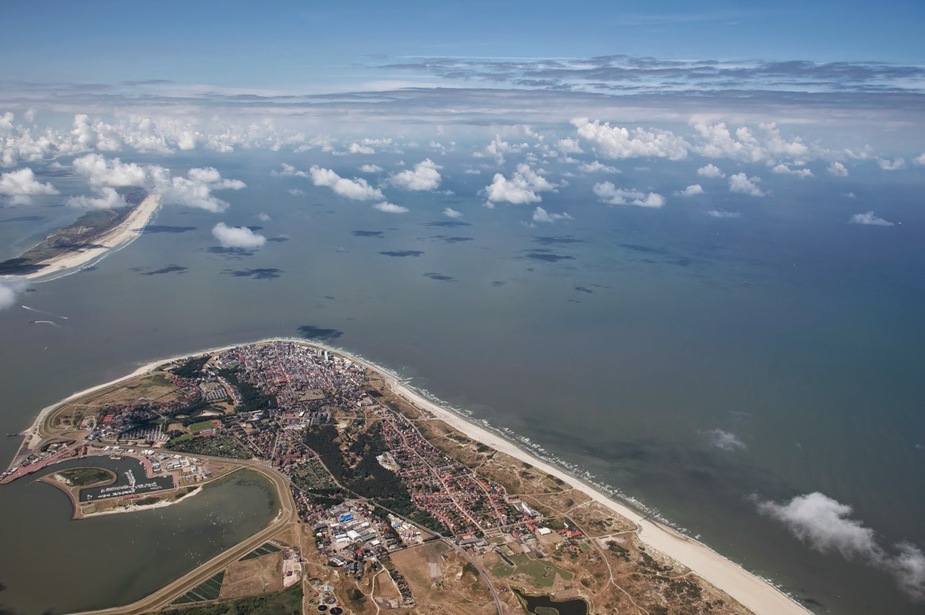 Uneventful. In 2.5 hours we were back at Lelystad. I would definitely fly to Norway again in the future. It is beautiful and GA friendly. 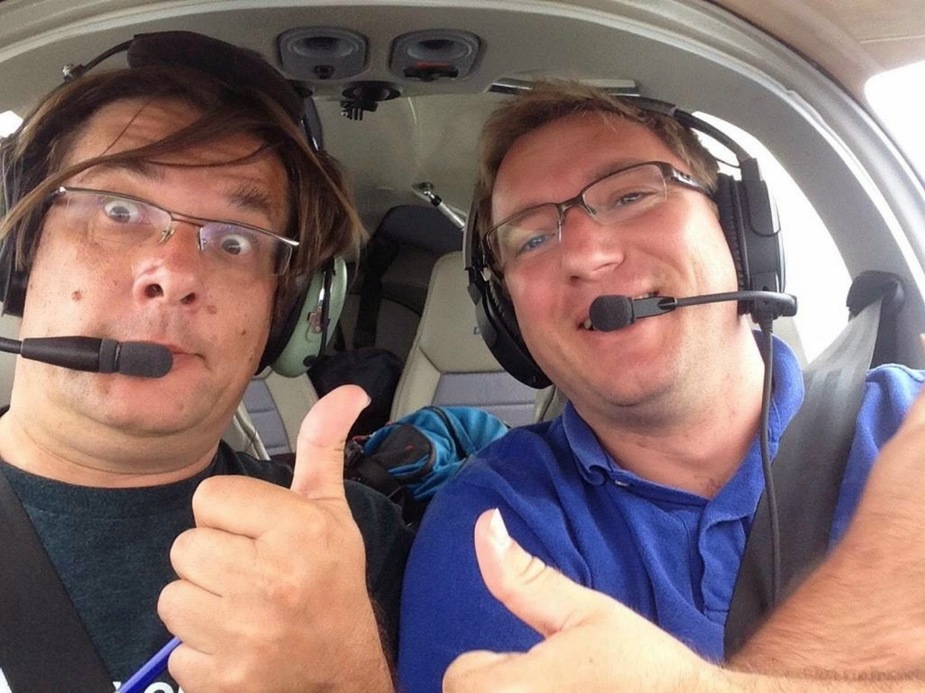 - Make sure you always have a spare bottle of oil with you.
- You do not need cash in Norway. You can pay with plastic everywhere
- Every field of reasonable size has a system of Flybussen that bring you to the center of the city. A return ticket is valid for 30 days and is 30-40% cheaper than two singles.
- Check the distance from the airport to the hotel before booking it. Our ‘close to the airport’ accommodation in Billund was two hours away.
- The TAF’s in Norway can be a bit unreliable. Call the meteo office for the briefing. They are friendly and helpful.
- You will pay 12 euro for a glass of beer. Just a warning.

and a buckload of luck with the weather.

Actually this summer has been like nothing we have seen with heat records all over the country. I think you have had much more luck with the weather than just a “buckload”

Great report! The more I read about flying in Norway, the more I’d like to go and do some myself. Is it possible (and not outrageously expensive) to rent locally?

Actually this summer has been like nothing we have seen with heat records all over the country.

Yeah, that’s why we here in Croatia don’t have summer at all – rain, then showers, then rain again :(

Great report! The more I read about flying in Norway, the more I’d like to go and do some myself. Is it possible (and not outrageously expensive) to rent locally?

All you would need to do is contact an aeroclub, join i.e. pay annual membership fees, get checked out by an instructor, and off you are!

Here is one flying club: http://nrfk.org/

Very nice trip report and outstanding pictures!
Norway is known for it adverse weather conditions. Good to see you were able to do it all VFR

It is about the same as my club have at ENVA (Trondheim). We have 1440 for 4 seater and 960 for 2 seaters. However, this also include landing fees all over Norway and free parking. But, for a (essentially) non member to rent one aircraft for several days in a row, that is not what the club is for, at least not at the moment.

The idea to travel and rent aircraft is actually a very good one though, that is the experience from the brand new OpenAirplane platform in the USA. Here is more info.

The idea to travel and rent aircraft is actually a very good one though,

I agree and have done it in several countries around the world. Did involve some license validations, but that’s part of the fun (and challenge). As you say, it isn’t always easy to find a place that lets you take the a/c away for a week or so if you’re not member of the club.

The OpenAirplane idea is good and I will probably join them.

boscomantico
Mainz (EDFZ), Germany
11 Posts
This thread is locked. This means you can't add a response.
Sign in to add your message