Finally, after many years of trials and tribulations, we have the panel in the Falco that we dreamed of! 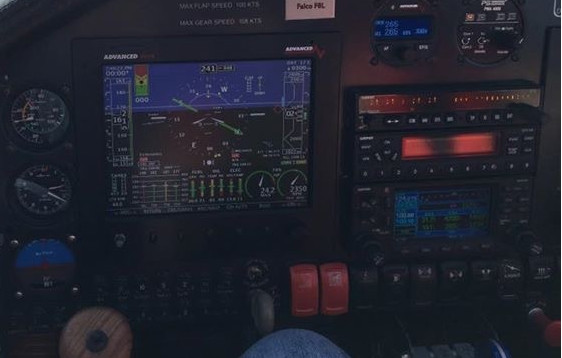 Lovely panel – puts many a certified panel to shame. I’m curious though, which standby instruments do you have. Are they a Winter ASI and altimeter and a TruTrak attitude indicator?

So ready for LAA IFR approval :-)
Good choice on the audio panel, the PS4000 combines everything! Small footprint with superior audio. I also put that in my Europa when I added a 8.33 radio as COM2.
Concerning the standby instruments, do you really need these? You could achieve the same and full redundancy with a second ADAHRS as you have 2 screens (with the assumption that you also have a backup battery).

ploucando,
Mechanical backups as fitted are required by UK LAA. They won’t accept second screen/ADHARS/backup battery for redundancy even for VFR flight.

An attitude indicator is rqd for VFR? AFAIK you don’t need any AI

No you are right the Attitude indicator is of course not required but the mechanical ASI and Altimeter are as is a mechanical compass of some kind.


Mechanical backups as fitted are required by UK LAA. They won’t accept second screen/ADHARS/backup battery for redundancy even for VFR flight.

I like the LAA, but there are some things that irritate me about it: this kind of gold plating they sometimes do. Their minimum wingloading for acceptable IFR aircraft (which is greater than the wing loading on some EASA certified aircraft that are allowed to fly IFR is another example).

They won’t accept second screen/ADHARS/backup battery for redundancy even for VFR flight.

Presumably this is IF the equipment is fitted at all? Does this mean that if you have a “glass” PFD-type product on the LHS, you need a normal electric or vac AI also?

A lot of US homebuilts would not comply with that requirement.

Their minimum wingloading for acceptable IFR aircraft (which is greater than the wing loading on some EASA certified aircraft that are allowed to fly IFR is another example).

The LAA has limited resources for this and they seemingly paid some consultant to draw up those homebuilt IFR requirements. I have seen the documents and there is a lot of stuff in there which is basically a flight of fancy, or if you like, an argument made with a less than overwhelming engineering/intellectual rigour

But we have seen the same sort of thing e.g. here (the vaguely worded threatening letter from the LAA was removed on the poster’s request).

BUT a line does have to be drawn somewhere if you want adequate controllability in IMC, and no matter where the line is drawn, there will be disappointed people (which is why the project is mostly confidential – they don’t want the s**t hitting the fan while they are doing it). OTOH some of the stuff in there goes the other way e.g. their assertion that a lightning strike is a negligible risk! In IMC??? But I can see that one… had they argued otherwise, all “plastic” homebuilts would be barred, due to a lack of bonding.

Also a lot of certified planes go back many decades and got IFR way back, by default.

Peter
Administrator
Shoreham EGKA, United Kingdom
38 Posts
This thread is locked. This means you can't add a response.
Sign in to add your message