I don’t understand much but so do I.

Ref: French electronics, in the late 70’s I was involving in sourcing components for the first ever TV video game. One chip was the 2708 EPROM (remember those?) and my favourite, as in most things chipwise, was National Semiconductor in Santa Clara. But Thomson CSF said they could do EPROMs more cheaply and my client liked the sound of that. So off I went to France with my engineer, to be entertained that evening by no less than the French Minister of Technology (or somesuch) at some incredibly lavish resturaunt in the hills with a picture window at which we were seated overlooking the lights of Grenoble. At some point in the evening he made a grand gesture out of the window: “Zis”, he said, “Is ze zilicon valley of Fronce!”.

Next morning we were taken to the factory where they appeared to be using 3" wafers, and were shown 2708’s on test. Of course the 2708 had a very convenient window in it (for UV erasing) and the lab we were in had an equally convenient microscope on the bench. Peering at the chip that they had ‘made’, it was instantly obvious that it was the National Semiconductor one. I said nothing.

If this sounds Francophobe, let me relate that my very first job in the electronics biz was working in the holiday in an MOD lab where they were making their own LED’s. They’d arranged a big demo for some big wigs higher up the military food chain and my job was to machine a neat little aluminium housing for their prototype 7-segment LED. Unfortunately they were having big trouble with the doping and and couldn’t get more than a faint glimmer out of the LED, so the day before the demo I was handed the sample HP chip that they were copying and told to install that instead. I signed the official secrets act over that so don’t tell anyone.

DEC used to write messages to the Soviets on their chips, as they knew the Soviets would clone their machines :-)

A friend of mine has been doing de-encapsulation of certain classic chips (Ferranti ULAs, Zilog Z80 etc) and transcribing the contents onto paper (for the Spectrum ULA, a 2m x 2m sheet, which was then converted to a logic block diagram). The Z80 had a few features to frustrate cloning by de-encapsulation and copying the die. I’d have to ask what exactly they were but if memory serves, it was things like P-channel transistors in unexpected places that would stop the chip from working unless you fully reverse engineered it and realised it wasn’t an N-channel FET — which would cost the cloner as much as designing a compatible chip from scratch.

Other amusing stories from back in the day that I heard – if you look at die pictures of the original 6502, there’s a small rectangular part of the die that has nothing on it. Apparently, when they were designing the chip (all by hand, on a huge sheet on the wall), there was a power socket in the way, so they just didn’t draw anything there.

Similarly, the Spectrum ULA was saved by a speck of dust. When Sinclair had designed the interconnect layer (on paper of course), they gave it to Ferranti, who digitised it and created the photo tools for making the chip, and fabricated the chip. The engineer who digitsed it made an error, and missed off connecting a clock signal from one half of the chip to the other. Of course, this was a huge problem because Sinclair ran everything on unrealistic deadlines, and there wasn’t time to hit the deadlines if testing had to be pushed back. Fortuitously, though, the only speck of dust in the clean room had landed in just the right place on the reticule (the photo tools to make the interconnect layer) to bridge the missing link in the clock circuit, so one die on the wafer actually worked, and they could test the chip and go into production on time!

OK here goes another relic from a bygone age: a KDI572. I got it as a part of a package from the US. Of course I took it apart 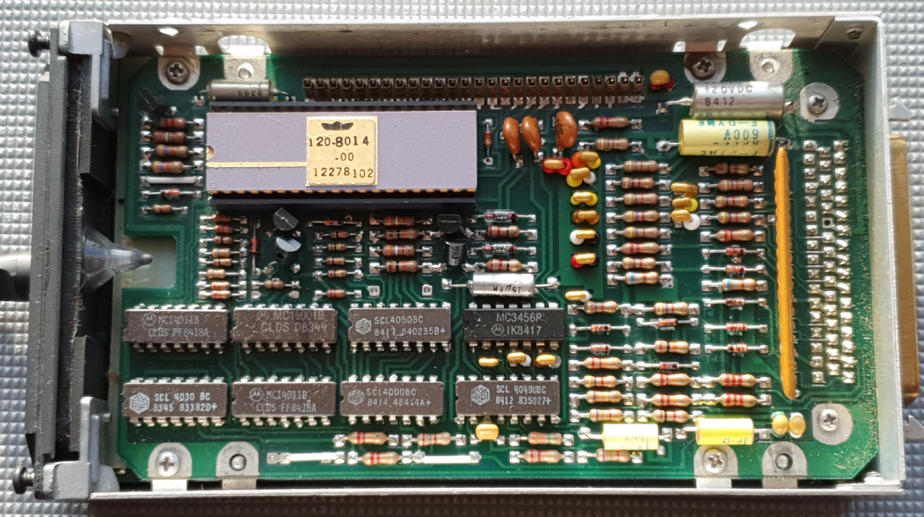 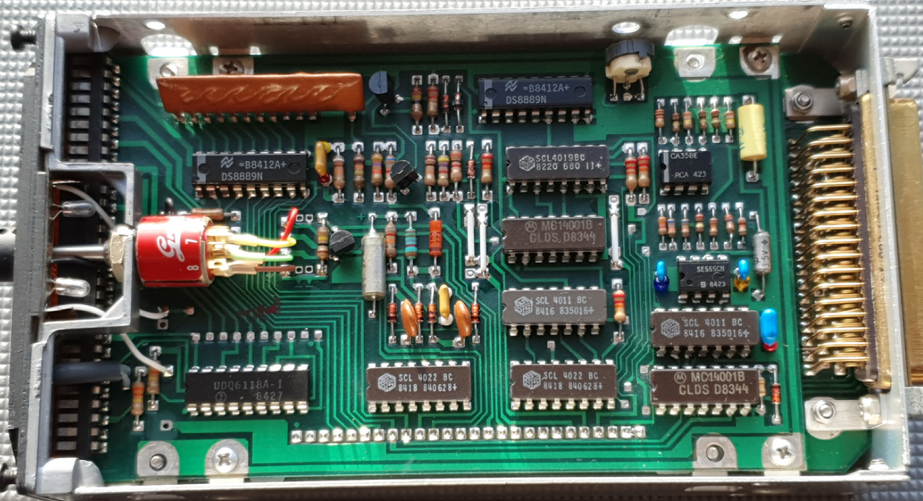 The single row connector at the top is probably a source of a lot of trouble over the years. The way the plastic TO92 cased transistors were inserted is also a bad (but very common) practice because it leaves the package under permanent stress. The correct way is to preform the leads before insertion into the PCB 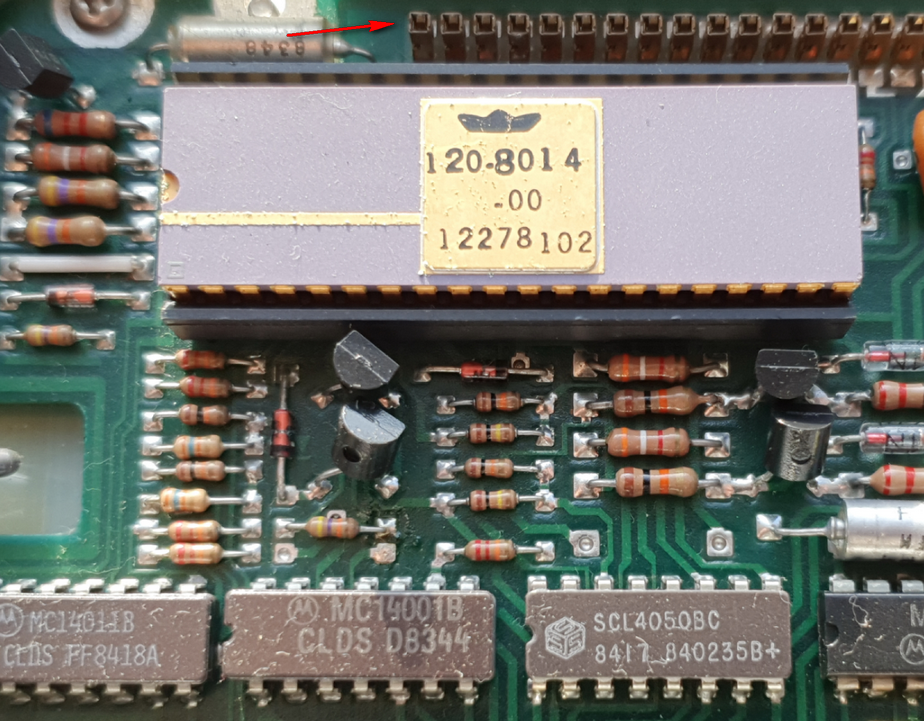 and I think this one isn’t going to work; spot the crack in the display 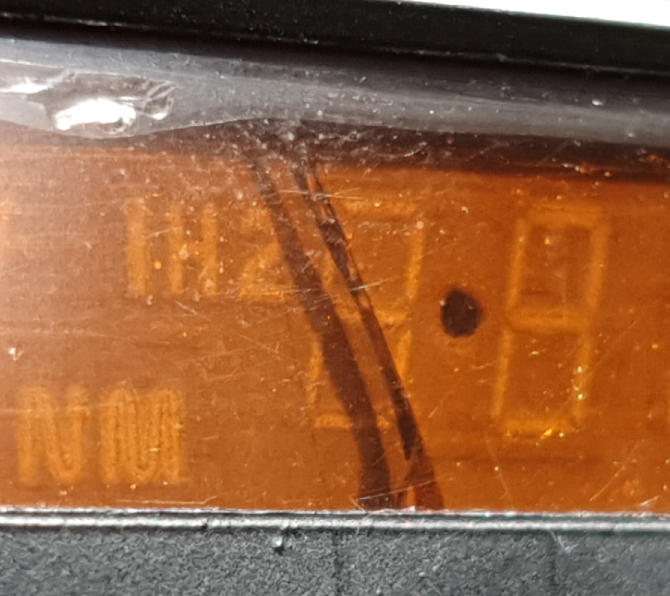 The getter in the back of the display still looks silvery, so perhaps the glass isn’t cracked all the way through? (Normally the getter turns dusty white once air has got in).

I had a closer look; the glass is smashed all the way through, with both front and back panes broken. Probably bad packaging.

The display is soldered to the PCB – it doesn’t use a connector like I believe some King products do – and changing it without damage would be very tricky.

I might put some low viscosity epoxy on it, anyway.

The King KNS80 display is on a connector (springy type, you probably know what I mean). Changing one out is trivial, but changing the whole unit even more so ;)

It would actually be easy enough to make a slide-in lookalike KDI572.

All the box does is decode a serial data stream from the KN63 box. It is a sync clock+data one. Then there are two DC signals (called “discretes” in avionics language) which select which of the two NAV radios is to be used for the DME channel number.

The Sandel SN3500 EHSI does all this. It snoops on the KDI572 or DME wires and picks up the data and displays it in the corner of the screen. My writeup shows this. Sandel additionally check that the NAV radio # matches the NAV1/NAV2 selection on the EHSI, to avoid you selecting say NAV2 while using the DME from NAV2, which could confuse the hell out of somebody.

It’s just hard work doing this with 4000 series CMOS logic and other hardware, and then you need a pile of components to drive that EL display. I went to look for a high voltage generator and could not see any inductors, and then found they do it with a Cockroft-Walton voltage multiplier which somebody builds as a little module 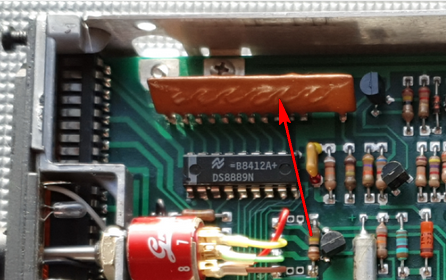 In a previous life I used to work in high voltage and we went up to 500kV DC (stable to ~1ppm – that’s another story) using this method.

King had very good engineers in those days.

With a microprocessor, the whole job becomes relatively trivial. The only slight issue is that nobody would be able to legally install it, except on homebuilts, and I doubt any of those have a DME

Also I wonder if you could do it on G-reg (LAA) ones; would you get it past the LAA inspector?

“(LAA) ones; would you get it past the LAA inspector?”
It would probably need LAA Engineering approval, rather than an Inspector. But would the inspector know about the change?

At some point I was dreaming of building an “open-source aircraft” (that was before starting wrenching on them and understanding what it takes to align all the bolts..), but maybe there would be room for an open-source avionics stack it definitely looks like the skills are there :-)

wleferrand
LFBR
150 Posts
This thread is locked. This means you can't add a response.
Sign in to add your message