Congratulations, and welcome to the club. Keep it up and next thing you know you will be flying a Citation Mustang!

It is very rewarding to be able to use the flight rules appropriate for the mission.

There were one or two odd ones which I’ve raised with the team, since one appeared to want to route me through Class A whilst VFR and another gave me a STAR that doesn’t exist.

Of course that can happen and is the expected behavior. A flight rule change can only happen at a waypoint and then you have to be on the airway to continue so the plan will take you there.

A lot of pilots mix up flight plans and clearances. They are not the same! Only in the lost comm situation your flight plan becomes your clearance (once you’ve received the first clearance, never before, on a Z plan you never become IFR in CAS if you lose comm before pickup).

Regarding the STAR – there are a few that are not universally published but do exist. We can’t distinguish them.

@achimha, can you elaborate on that? If the flight plan enters airspace A VFR and changes to IFR at the pickup point which is inside A, how would you fly that? Call ATC in advance and hope they will pick you up IFR before you enter the airspace? Or is there another trick?

Yes, CAS requires a clearance. The flight plan alone entitles you to exactly nothing. You can get the clearance on the ground (e.g. US via RCO) or in the air.

This thread is probably the most recent one dealing with departures outside CAS.

Also I have some trip writeups here which show how European IFR is done.

Thank you, Peter and others. That is interesting and useful. So much to learn.

Bug (or feature?) of EuroGA-Autorouter integration

Dear Achim and colleagues, is this a bug or a feature? I have recently changed an e-mail address in my my EuroGA account, and upon a subsequent login to Autorouter, I was suprised to see I had lost all my routes and aircraft profiles. However, a change to the old address in EuroGA immediately put everything back in order.
On a related topic…
…what arrangement is currently more advisable – logging into Autorouter via EuroGA or separately?
…is there a way to download/upload my Autorouter data (aircraft profiles, flight plans, routes) to/from my local computer in XML or any other human-editable format?


I have recently changed an e-mail address in my my EuroGA account, and upon a subsequent login to Autorouter, I was suprised to see I had lost all my routes and aircraft profiles.


…what arrangement is currently more advisable – logging into Autorouter via EuroGA or separately?

Both options work equally well. You can convert a EuroGA based account to a standalone account should you need it.


…is there a way to download/upload my Autorouter data (aircraft profiles, flight plans, routes) to/from my local computer in XML or any other human-editable format?

What would the use case be? We allow sharing aircraft definitions among users but we do not allow downloading definition files. Internally we represent each aircraft with a custom XML format (plus some database attributes). I haven’t identified any sensible use case that would require exposing that format yet. 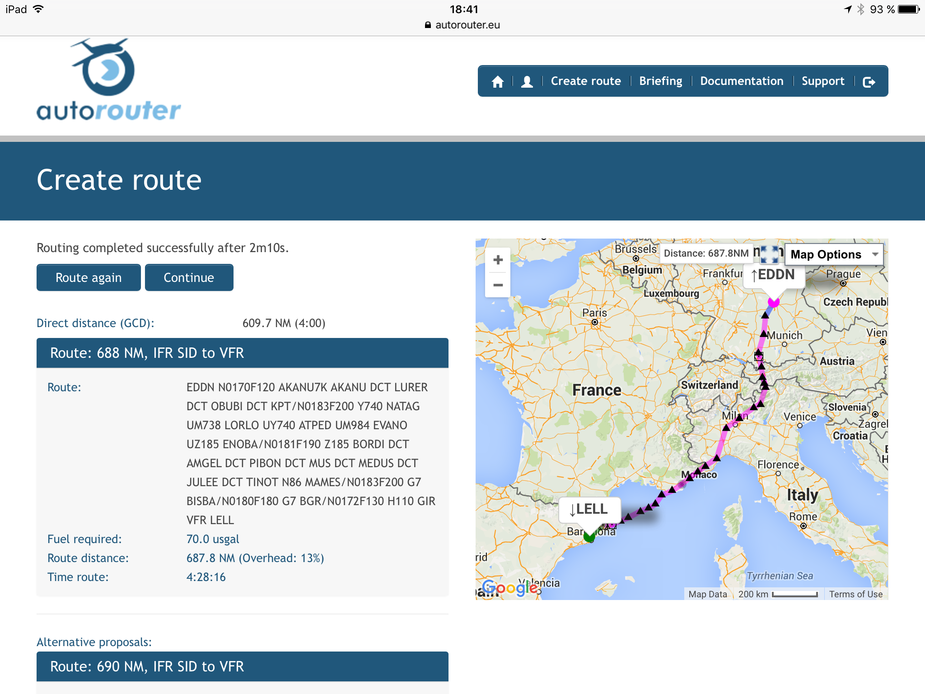 What is going on? I understand there is now a need for compulsory customs at all French airports but what happened to force routes to avoid overflying France completely?

As you can see, it doesn’t avoid France.

It might well be the best routing. As you know, there is no airway to cross Switzerland southwestbound (except via Geneva, which might be a similar detour).

boscomantico
Mainz (EDFZ), Germany
548 Posts
This thread is locked. This means you can't add a response.
Sign in to add your message