Here it is stated that LSA can use uncertified parts. But perhaps it enables the airframe manufacturer to become a sole source, which is obviously a bad thing.


Certified vs non-certified Rotax. Nobody has been able to give me a convincing story about whether the certified one would be safer in any way. Same production line, same SB service. Surely more expensive. I’m very open to be educated though!

Hope that you were not convinced… Exactly the same engines, there is just one more paper with the certified ones.

I have great sympathy with your position in Balearics especially with LEIB being handed over to the likes of Ryanair, EasyJet, and the oligarch private jet flyers through the six fold increase in Airport charges to light aircraft flyers. This is anti-competitive practice which contraces TFEU article 101/2 and needs to be changed. I’d like to be in touch with you if you can respond and we have a chat. I’m at UK [email protected]
Stephen
Cessna 340/425 flyer

Well, as the starter of this thread I’m probably responsible to keep it up to date.

My move to UL did not last that long. Not because I did not like it, to the contrary!

It turned out that Spain is taking the rule of ‘maximum 6 months per year for foreign reg UL’ seriously. And there now are policemen (“Pegasos”) that have been trained in things aeronautical (not just UL) and know where to look for when doing a check. They do show up at small fields and larger fields apparently. I actually had a ramp check in 2019, while my permit for 6 months was still valid, luckily.

Since I fly a lot and hate having a sword of Damocles hanging over my head, I needed to make a change.

My preferred route would have been to get the Bristell that I flew to Spanish reg, while waiting for the 600 kg to filter through down here, but even if possible, it would probably have been a long road. The other option would be to buy an UL that is listed as able to be put on Spanish reg. But the choice of brands is limited, plus the current 450 kg MTOW limit is unworkable.

Now, there has always been word that Spain is going to make life better for the UL-scene. And indeed the rumors are recently becoming stronger that there will be alleviations; flying higher than 1.000 ft AGL, MTOW 600 kg, etc. However, there may be lots of surprises in the small print. And today it is still unknown when the new legislation will hit the street..

So about a year ago I took the decision to look for a certified aircraft again. However, a strict spec would be the ability to use small fields, and to burn Mogas. Following a change in the law the fields that used to be ‘UL-only’ can now be used by certified aircraft as well, with some restrictions.

So the hunt was on and I looked at various aircraft that would fit the bill. And finally settled for the Bristell B23 that was under development at that time.

Went to the factory in eastern Czechia last January and ordered one. For delivery May/June. I was one of the very first, but not afraid of getting on the bleeding edge. The company seemed (and still seems btw) solid. And the aircraft is a beefed-up version of an already solidly design airframe. It’s a family owned business with extremely knowledgeable, responsive and motivated owners, and a healthy production flow. It’s a joy to spend money that way..

Then an issue started hitting our planet. And so the EASA CS23 certification and the production suffered. Bearing in mind the massive consequences that the Virus has for the whole world, I will of course not moan one second about the comparatively minuscule inconvenience of getting into a delay. Hope to get her within the next weeks and give you a flight report.

Certification was completed in early October. Earlier I have been in touch with a test pilot (from the company that managed the certification process for Bristell who used to post regularly here), and read the report of the EASA test pilot. Their reports only re-affirmed the confidence I already had.

OK, enough for background. About the aircraft:

First, have a look at their site. Plenty of info, pics and video’s available, even more on their Facebook link:

The aircraft is marketed as a trainer and a traveler, certified for night VFR. It has the carbureted 100 HP Rotax 912S driving a proper prop (3-blade MT hydraulic C/S) and an impressive set of avionics and equipment; Dual Garmin G3X, Garmin autopilot, Garmin NAV/COM radio, nicely integrated into the G3X, Garmin ADS B in/out TXP and an L3 multifunctional back-up instrument. Kind of funny; because of the L3, there is no longer a whiskey compass. It’s optional! Probably a relic needed for schools. Welcome to the brave new world. Fine with me, anything that is in the way of my view to the outside is great.

From the outside it’s hardly different from the NG5 UL version. But there are serious structural changes. Beefed-up engine attachment and landing gear, thicker skin to name a few. All this results in a serious increase in the BEW. A typical fully equipped NG UL would weigh 350 kg, the B23 weighs 435 kg. But the MTOW is 750 kg, so the payload is a very generous 315 kg.

An IFR version may be on the way. Not sure whether there is much panel room to put in the additional radio and audio panel to start with, but surely they must have thought of that. I would need to think seriously to do that or not. Does not add much functionality for my kind of flying, and Spain is known for its severe VMC all year round.

More powerful engines will probably also be introduced at some point. Rotax 915, and maybe even a small Conti?

This aircraft is not a rock star. But nor am I and it looks unlikely that I’ll ever become one. A MTOW of 750 kg with 100 HP is not good for any bragging rights. But absolutely fine for me. I’m doing sightseeing and some traveling. And if traveling, it’s often in formation with slower UL’s. Typical cruise is 100-110 KTAS. A critical factor for me was the take-off and landing performance, because of the small fields I usually go to. At MTOM the T/O ground roll is 365m so that’s no problem for my home field (800m) but definitively a problem for some other fields I go to often. But here physics come to the rescue. You may,or may not, remember from ground school that a good rule of thumb is that for every 10% of weight increase, the take-off distance increases by 25-30%. So, at 600 kg TOW (payload 165 kg, that’s me plus a lot of fuel/gadgets) you suddenly are in the air by 200 m or so. Just to make sure, I had a cancellation clause in the contract. Will not need to use it now that the factory has tested the craft at 600 kg, and measured 220 m take off roll, and brisk climb afterwards.

Landing distance is not the critical issue in comparison with T/O distances for relatively underpowered aircraft like the B23. As long as they have good brakes, and this one has; Beringer.

OK, enough words, here’s some eye candy! Of course it’s a bit of overkill for my typical usage. But hey, I thought of asking them to take out all kind of stuff to save a penny, but they would have to refuse because of certification I guess. Isn’t that a shame? 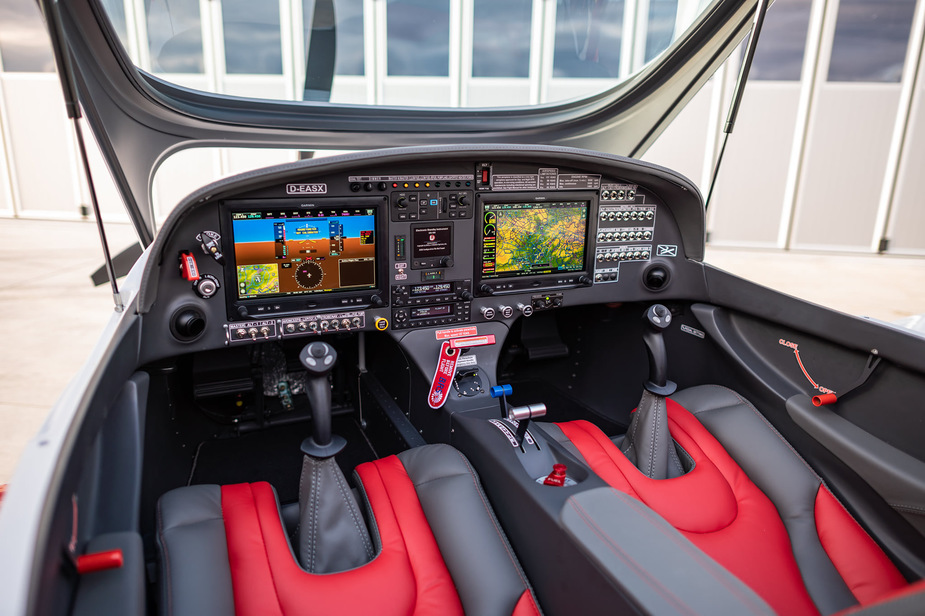 Is it a good traveler? Depends. Not if you only look at speed, although I’m personally never in a rush. But the range is impressive (5-6 hours at 100 knots takes you a long way). Of course nobody but P***r wants to sit that long, but you can easily do 4 hours in this cockpit. The seats are excellent, it’s very roomy at 125 cm wide and quite tall inside, so depending on your agility and length of your tube you may even succeed to avoid a pit stop. Adding to comfort is the low noise level with that smooth little Rotax sitting way up front.

Quite a few of features:

Chute, LVL button, AoA indicator (aural and integrated in the PFD) and of course spin-certified.

Reminds me to put wipes in the cockpit. To clean the LVL button once in a while. Imagine some wise-ass Pegaso taking fingerprints off that button and busts me from using it too often and thus being unfit to fly.

Having defected to the dark side 3 years ago, the biggest challenge ahead will be for me to convince our Forum President to allow me back into the ‘Freemasonry of the Certifieds’. Any suggestions how I can bribe my way back in are appreciated.

@aart Felicitaciones very handsome looking steed, hope you will be flying many hours in your new aircraft very soon !

Put some EuroGA flyers at some interesting locations :) and a review or three into the EuroGA airport db.

@aart
“And then I found out that 5 kms away from my winery project in Penedes (Catalonia) there is this great ULM field called Avinyonet! “

This is the huge advantage STOL/single engine FG/ ultralights often have… they can land quite a bit closer to the actual destination than bigger, faster planes can… you wanna go to Hvar? You can land on Brac; take a taxi to the port and then catch a ferry to Hvar, or land on Hvar itself. That’s just one example… there are many!

Can your new steed do grass/ short field nicely??? The eye candy aspect is mouth watering!

Well done aart on acting and not hesitating.

Following a change in the law the fields that used to be ‘UL-only’ can now be used by certified aircraft as well, with some restrictions.

Could you summarize what these restrictions are?

Well done Aart, on staying ahead of the game. It looks like a very nice plane.

5hrs endurance to empty tanks is really just 3hrs in Europe as the longest airborne time before one has to start looking for somewhere to land, but you already know that

and it will be fine for your particular sort of flying which you have already described.

Put some EuroGA flyers at some interesting locations :) and a review or three into the EuroGA airport db.

That helps our community more than anything else.

Peter
Administrator
Shoreham EGKA, United Kingdom
142 Posts
This thread is locked. This means you can't add a response.
Sign in to add your message